On "SNL," Cecily Strong's Goober the Clown nails the joy and comedy of abortion 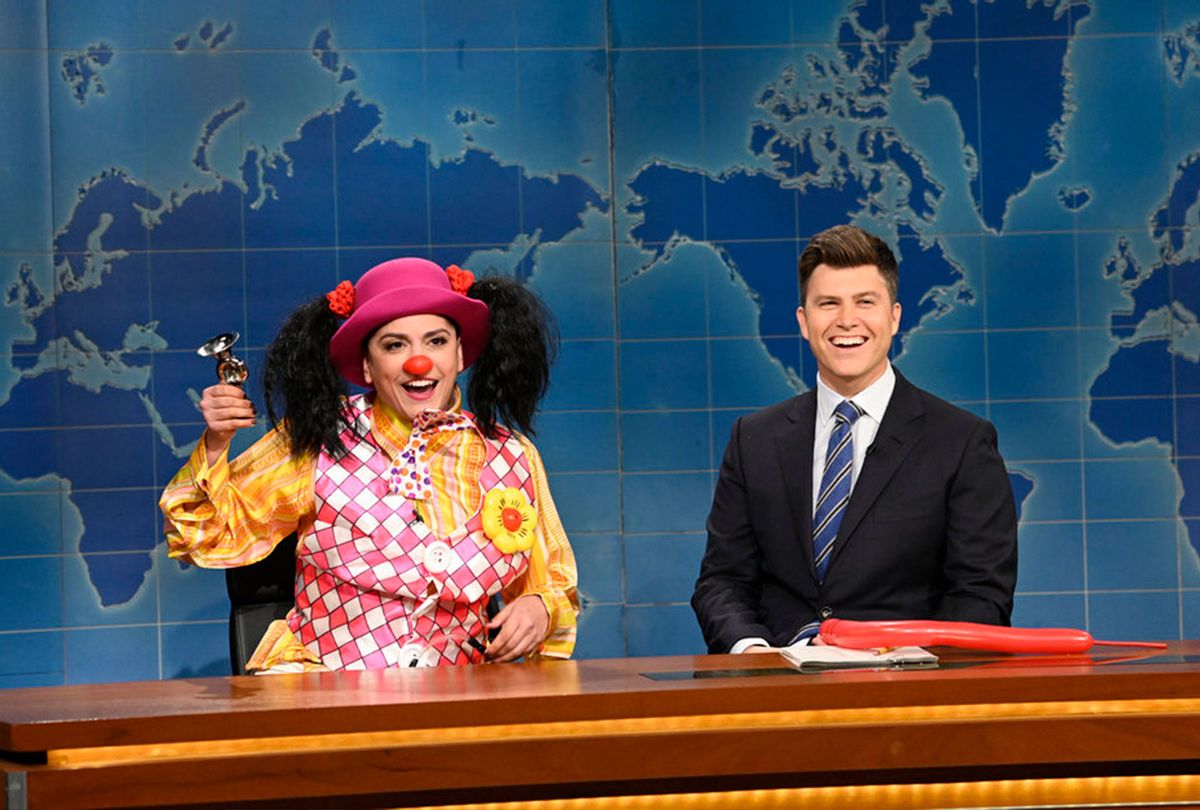 Yes, you can joke about abortion, and Cecily Strong just showed us how.

The legendary "Saturday Night Live" comic shared her abortion story while in the guise of a a joyful clown on this week's "Weekend Update" segment, proving that talking about abortion and our abortion experiences doesn't have to be all doom and gloom, or shameful.

"It's a rough subject," her character, Goober the Clown, tells anchor Colin Jost, "so we're gonna do fun clown stuff to make it more palatable. Who wants a balloon animal?"

Sporting a bright red nose and bright yellow and pink clown attire, Strong normalizes the everyday discussion of abortion while also emphasizing how ridiculous it is that it's a topic of debate. Throughout the routine, she mixes in clowning, whether it's making her bowtie spin, playing with prop bug-out glasses, or inhaling helium before speaking, all of which cause Jost to crack up.

Strong opens by lamenting, "People keep bringing [abortion] up, so I gotta talk about freakin' abortion . . . And I wish I didn't have to do this, because the abortion I had at 23 is my personal clown business. But that's all some people in this country wanna discuss all the time, even though clown abortion was legalized in Clown v. Wade in 1973."

Strong also emphasizes that cultural attitudes that only accept some people's particularly sympathetic reasons for having abortions implicitly or explicitly shame others' reasons, and have consequently obscured how common abortion is.

"Did you know that 1 in 3 clowns will have an abortion in her lifetime?" she asks Jost. "You don't, because they don't tell you. They don't even know how to talk to other clowns about it because when they do talk about it, if you were a clown who wasn't the victim of something sad like clown-cest, they think your clown abortion wasn't a 'righteous clown abortion.' I mean, what the d**k is that?!"

Strong also recalls how the doctor who performed her abortion had told her a joke — "The doctor asked if I got pregnant on my way over to the clinic because I wasn't very far along" — injecting some joy and laughter into her experience. She recounts a dinner party of clowns she attended, where she learns "like eight other clowns at the table" had abortions, too. "And then everyone's excited and relieved to be talking about it, and then it's like, 'Wow, we kept this secret for so long despite being so grateful it happened,' honka honka honka," Strong says.

Strong's "Goober the Clown" has been widely lauded by advocates not just for her signature sharp comedy, but also for sharing her personal abortion story, and highlighting how her abortion at 23 is what ultimately gave her the ability to become one of the most successful comedians of her generation. The short clip of Goober the Clown hit nearly every note advocates and politicians have been trying to stress for years — how no one should be required to have a "sob story" or traumatic experience with rape and incest to justify their abortion; the overwhelming commonness of abortion despite how stigmatized it is; and certainly, the ease with which we can talk about abortion in gender-neutral ways, as Strong refers to abortion patients as "clowns" rather than "women."

For years, abortion stories have been shrouded in secrecy and shame, because of stigma perpetrated by both rabidly anti-abortion politicians, and liberal voices that perpetually frame abortion as a "difficult choice" for everyone, or a health service that should be "safe, legal and rare" — framing we don't hear for any other health service. Instead, following a wave of years of organizing and storytelling from people who have had abortions, Strong turns the dark, traditional narrative about people who have abortions on its head.

But perhaps the ultimate takeaway from Strong's brilliant three-minute stint as Goober is that abortion stories and experiences are all different. Abortion isn't a "difficult" nor regrettable experience for everyone (95% of people who have had abortions don't regret it), and while the health service is mired in barriers, restrictions, needless politicization, and constant vitriol and harassment, many people who have abortions are able to find joy, even laughter, in the experience. Because abortion, as Strong drives home, isn't just about ending a pregnancy — it's about building the life you want to live, and there's nothing more joyful than that.

You can watch Strong's full Goober the Clown performance below, via YouTube.