The Apple TV+ series continues to baffle in its second season, closing on a scene that serves almost no one 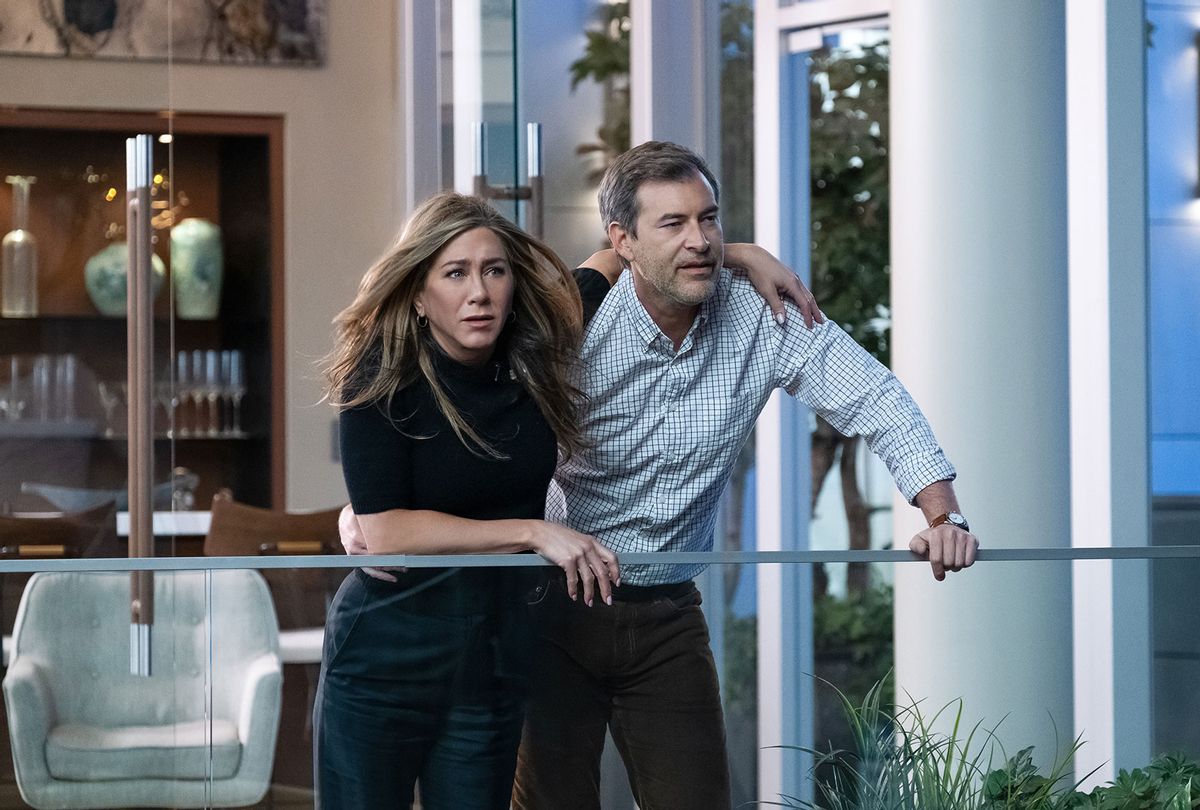 "'The Morning Show' is broken."

Those aren't my words. Producer Mia Jordan (Karen Pittman) says this to Daniel Henderson (Desean Terry) the weekend anchor who's been informed he doesn't have enough of an "it" factor to be a star.

Be that as it may, when news gets out that UBA network darling Alex Levy (Jennifer Aniston) has tested positive for COVID-19, network president Stella Bak (Greta Lee) pulls Daniel aside. She needs him, because Alex is a sweaty, feverish mess. Family problems have sidelined her co-anchor Bradley Jackson (Reese Witherspoon), whose brother is an addict who disappeared from rehab and is missing somewhere in New York.

That leaves Stella with Daniel, and she informs him he'll be anchoring "TMS" for the next few weeks.

She expects this news to please Daniel. Instead, he quits. He's not going to pick up the pieces for her this time, he says. Daniel's reasons aren't entirely the product of a bruised ego. His grandfather is in assisted living, and he has to make sure he's OK.

But since it's not safe to fly, he has to drive. Hotels aren't safe either. Nowhere is safe, especially not for him. "Good luck to me, a Black man, sleeping in his car," Daniel tells Stella. "But I gotta do it."

RELATED: "The Morning Show" looks at how consequences catch up to some people sooner than others

Terry's second season subplot has been the season's weakest by far, and this isn't fundamentally changed by his decision in the season finale "Fever."  What has shifted are the real-life circumstances under which the episode dropped, the same day that a jury returned with a not guilty verdict for a teenager who drove across state lines with a AR-15 last year and opened fire on unarmed protesters, killing two men in the process.

Everything about the trial played as a cruel joke in live coverage, which steeled everyone to expect this killer, who is now an adult, to walk free and face no consequences. But tragic, horrific injustice defies preparation. Armor up all you want – such news will still remind you of your vulnerability and the system's low regard for your safety. Good luck to you.

If you watched "Fever" with that knowledge dancing around in your brain, the finer points of Alex's flopping and barfing through her COVID symptoms may have been lost on you. The foolish decision for devoted producer Chip (Mark Duplass) to willingly expose himself to her illness, purely to be by her side and produce Alex's stream-of-consciousness live feed as her brain melts – all of that feels unnecessary.

That's not the reaction you want out of an A-plot designed to actualize consequences for a self-serving woman who flew to the epicenter of a worldwide pandemic and may have brought it home to all of her co-workers. And maybe, in another timeline, it would make sense to ruminate over the karmic justice of Alex's condition and consider whether showrunner Kerry Ehrin, who wrote this episode, convincingly makes a case for Alex's redemption through her "judge not lest ye be judged" speechifying.

Ditto for Bradley's frantic rambles down the streets of Manhattan with Cory (Billy Crudup), laid low by a massive career miscalculation ensuring his streaming service UBA+ is dead on arrival save for the marathon rantings of his mad pandemic queen. Denuded of his optimistic delusions he turns to Bradley, the woman he's hired and defended, and says out loud what we already know, which is that he loves her.

This is shallow and manipulative even by the lowest of season-ending standards, which leads a person to wonder whether Ehrin was placing an admission about her show in Pittman's mouth instead of simply giving Mia something to candidly admit to Daniel when talking to him on the phone.

Mia catches Daniel with her admittance while he's pulled over in Cincinnati and shares that she needs him to come back. He's insistent that he has to make his own opportunities instead of waiting for a seat that will never open up.

"It doesn't matter where you go as a Black person, you're going to deal with some bulls**t," she says. "It's f**ked up, but it's true." He could leave, she says, but by sitting in the chair Alex takes for granted, so many people will benefit. We can keep pushing, she continues, "Please don't give up."

"Tomorrow will come someday," she says, but not even she sounds like she believes it.

"The Morning Show," as in the Apple TV+ series, isn't entirely broken. But it has written itself into a state that makes us wonder why we'd want another season of it, and whether the central justification of Aniston and Witherspoon's chemistry matters if neither character represents or does anything substantial.

That's the problem when you set storylines in the near past with the notion of making statements about issues that are barely relevant. Alex's cancellation storyline and the introduction of Paola Lambruschini (Valeria Golino) as a documentarian sympathetic to Steve Carell's sexual predator fluttered around an exploration of the possibility of redemption and forgiveness. But since it's been established that we live in an age of zero consequences for men on the right side of power, what does that matter?

Alex's story mimics CNN's Chris Cuomo's televising his experience with COVID after he tested positive in March 2020 and continued anchoring from home as his symptoms increased, dropping 13 pounds in three days early in his efforts to keep working. Twenty months later, and in the aftermath of his brother Andrew's plummet from grace following multiple scandals, the anchor's workaholism matters less than the revelation that he advised the governor and senior staffers on how to respond to the multiple sexual harassment allegations the politician faced at the time.

So when Alex stares into the camera and admits that she's looking inward and asking who she wants to be, it's hard to care about her illness-guided journey to satori. Who does it serve? Not the show. Not the viewer. Only her. Daniel points this out on his way out the door. If he never comes back, good for him.

When a show swings and misses it helps to find an example of what it would look like if it got it right. Once again, the circumstances of our ugly present provided a gem in this outtake from the Friday installment of "The Amber Ruffin Show," which streams on Peacock, a real-world version of UBA+.

Ruffin is not a news anchor. But on Friday she fulfilled an even more important role as a broker of truth and hope as Friday's news out of Wisconsin broke, and threatened to break so many. On the show, in a clip also posted to social media, Ruffin looks in the camera, holding back tears, and speaks plainly.

"You guys, because I have my own show, I have a responsibility to say things that people need to know that aren't be said." Ruffin goes on to explain that the verdict was announced just a few minutes before the show began taping. "So I can't believe I have to say this but . . ."

She pauses to hold back tears, then continues. "It's not okay for man to grab a rifle, travel across state lines and shoot three people and then walk free. It's not okay for the judicial system to be blatantly and obviously stacked against people of color.

Ruffin goes on: "And I can't believe I have to say this, but you matter. You matter. Every time one of these verdicts comes out. It's easy to feel like you don't but I'm here to tell you that you do. You matter. You matter so much that the second you start to get a sense that you do, a man will grab a gun he shouldn't have in the first place and travel all the way to another state just to quiet you."

She ends with, "That's the power you have. So don't forget."

Ruffin is an entertainer who understands the power of her platform and when, and how, to use her personal influence to the greatest good she can do in the moment. "The Morning Show" is entertainment that is supposed to tell some version of the truth about the news business, and barring that, use its characters to say something genuinely even if it's scripted.

Ruffin had moments to figure out what she needed to say to offer uplift at a dispiriting moment when America's racism pandemic spiked and reminded us it had no intention of abating. "The Morning Show" has had two seasons and still hasn't figured out its message.

At the finale's close, after Alex has haltingly extemporized about whether she deserves all the terrible things that have happened to her and mulls the possibility of life after death, she shrugs. "I'll see you later," she offers with a smile.

All episodes of "The Morning Show" are currently streaming on Apple TV+.