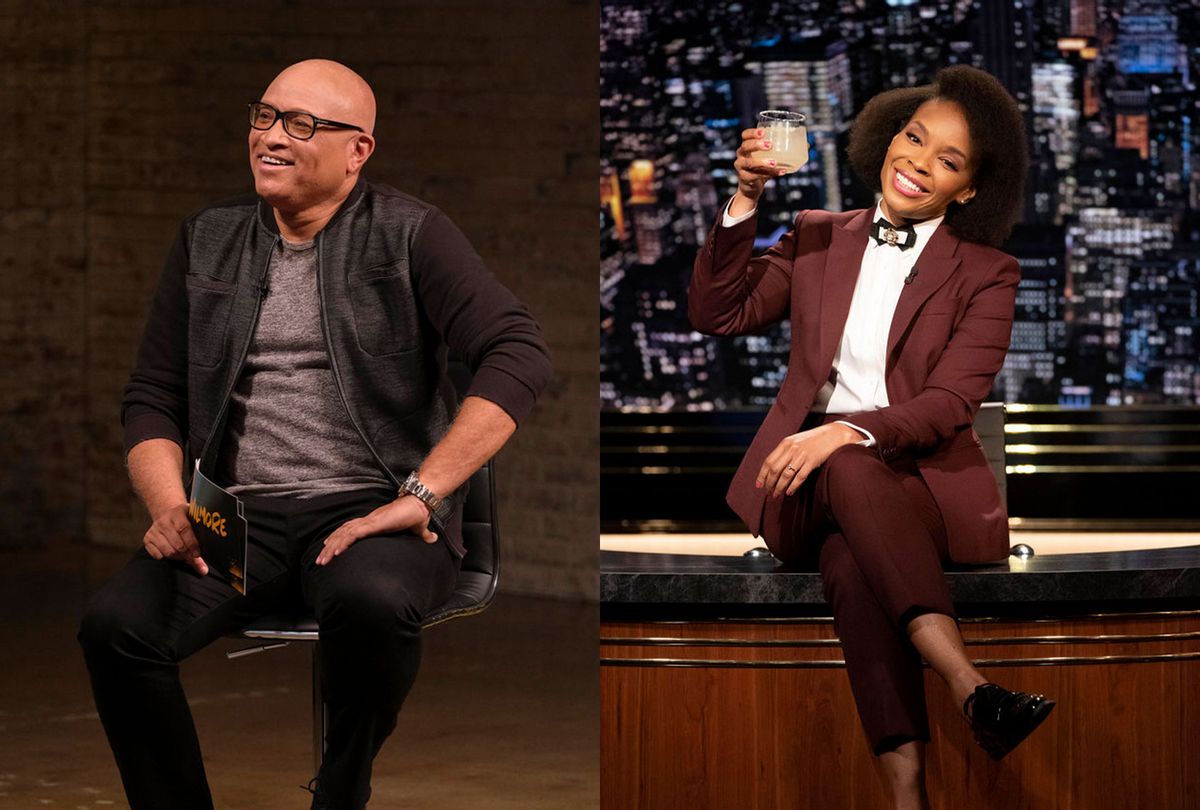 Slightly past the midway point of "The Amber Ruffin Show" premiere, the irrepressibly jolly host sits down for a serious moment.

"Because I have my own show, I have a responsibility to say things that people need to know but that aren't being said," she explains. "It's a cool opportunity that I don't take lightly. There are very big obvious truths no one wants to say on TV, but I will."

People who recognize Ruffin from her guest segments on "Late Night with Seth Meyers," where she's worked as writer since 2014, understand that she could be teeing up to just about anything. Ruffin's comedy claim to fame is to envelop hard truths in a bubble wrap of perkiness. An early memorable appearance of hers on "Late Night" was a post-2016 election bit where she appeared under the auspices of offering a message of hope to  Hillary Clinton's shocked white supporters.

That message? "Join in the fun!" she said, the "fun" being our nation's rampant sexism and racism to which they'd previously turned a blind eye. She said this time and again while smiling brightly, dancing and explaining that Black Americans have been dealing with this animus all along.

Four long, trying years later, about half the country is buckling under the weight of So! Much! Fun! And we need Ruffin's brand of humor. By the time she sits down to address her "Ruffin" viewers, she and her announcer Tarik Davis have already bounced through sketches featuring A White Forgiveness Clock, which sets a goal of 48 hours for white Americans to go without a single transgression against Black folks in order to attain forgiveness (you can guess how well that goes); a visit with Fun Auntie; and a random bit that turns into an ode to Mary J. Blige – because she can.

She goes on in the same somber tone: "And another thing. I can't believe I have to say this, but – old women in New York City, stop cutting in line and being like, 'Whuuuut? Meee? I didn't knoooow!' I know you know! You've been on this Earth a thousand years but you don't know what a line is? Please!" And there it is, that bubble wrap.

"The Amber Ruffin Show" and Larry Wilmore's new interview series, "Wilmore," both had relatively quiet debuts on NBC Universal's new streaming service Peacock – I should say, they were compared to the loud fanfare that tends to accompany the rollout of talk variety series that premiere on network, cable or even more established streaming services. That said, Ruffin and Wilmore's streaming forebears, specifically talk series hosted by Sarah Silverman (on Hulu), Michelle Wolf, and Hasan Minhaj, (both on Netflix) have all been canceled.

Wilmore knows a little something about what that feels like; Comedy Central unceremoniously canceled his groundbreaking series "The Nightly Show" only weeks before to the November 2016 election. That makes the debut of "Wilmore" kind of a culmination of a goal deferred for four years.

"The Nightly Show" was designed by its creator Jon Stewart to spur conversations about race, class and gender into a late night talk show format, and it also made history in making "A Black Lady Sketch Show" creator Robin Thede the first Black woman to be named the head writer of a talk variety series. But apparently it either wasn't the right fit for Comedy Central or ahead of its time . . . by a few months.

That legacy sets a strong foundation for "Wilmore," a series its host is approaching like a limited series, or something of an experiment. The way things are going in 2020, both it and "The Amber Ruffin Show" are at once on time and overdue.

"For the next 11 weeks, we're here to have that conversation that America keeps saying it wants but so far has been a little chickensh*t about," Wilmore says to the viewer in his first episode from a comfortable armchair, a tumbler of brown liquor sitting on a small table at his side. "We'll also hold your hand through the current craziness we're calling an election."

Wilmore's Peacock talk show and Ruffin's sketch odyssey hit recognizable notes, both in terms of format and what people know about each of them.

Wilmore, who co-created "Insecure" with Issa Rae and is an executive producer on "Black-ish," designed his eponymous program in the style of an old-school public affairs series like "The Tavis Smiley Show" or "Charlie Rose" (minus the sexual harassment allegations). In the place of sketches and bits, Wilmore arranges his monologue around thoughtful one-on-one dialogues with newsmakers and experts in a specific field or topic. Week one gave us conversations with U.S. women's soccer co-captain Megan Rapinoe and congressional candidate Cori Bush to bring context to protests.

"The Amber Ruffin Show," in contrast, has no guests and features no one else but the host dressing up daily frustrations common in friendly shenanigans. Like so many other comics she could have chosen to rip into Trump's idiotic and heartless declarations that Black Lives Matter is "bad for Black" people or "our [COVID-19] numbers are better than almost all countries" in a monologue, but instead she presents a series of large drawings to humorously explain why these statements are "so false that anyone who believe [them] is 'made of dumb.'"

To clarify what she means, Ruffin presenting an outline of a gingerbread man with the word "dumb" written in multiple spaces. "OK so, here's their body, right? And where their head should be? It's just a bunch of dumb. And that dumb continues all the way down to their feet. There's some in this foot, and some in this foot, and there's even a little bit of dumb in the belly button!"

In the second episode of "Ruffin," she lampoons Colossal Failures in Allyship and white guys who view Black progress and achievement as occurring at their expense: a random guy named Brian marches into the empty theater where she films her show to accuse her of taking a hosting gig from him. He graduated from Harvard, after all!

Transcribing these details fails to capture Ruffin's delivery or the singular chemistry that makes her a delightful guide through the trauma of everyday racism, two terms that would typically be at odds with each other. In attempting to describe her specific appeal, one struggles to write around terms that are typically disempowering to women like "adorable" or "spunky" or any other descriptor that would rightly merit a slap in the face. Ruffin's plugs into them, though. They're her power sources.

On "Late Night," Meyers taps her to break down a flood of crazy headlines on a wide array of issues in a recurring segment called  "Amber Says What?" This is why, in the wake of George Floyd's murder, Meyers had her share her stories about run-ins with the police with viewers – and it was effective because of the disconnect in a lot of white viewers' minds between Ruffin – their cute TV buddy – and a person who might get wrongly arrested, brutalized or shot and killed.

"If you think about it, it's kind of my duty to have fun," she explains during one of those testimonials, where she recalls having a Chicago cop pull a gun on her for skipping down an alley. "Because at any time, I could get murdered by the police."

This is that conversation America is too chickensh*t to have presented in ways that America understands and, moreover, may be willing to swallow and digest.

In "Wilmore" it occurs with the type of gentle, seen-it-all honesty that its host has always traded in. Back in 2016 I described Larry Wilmore as "an affable, well-informed figure doing his ablest to find punchlines within a never-ending parade of stories about the police shootings of unarmed Black men, the erosion of civil rights on a federal level and, among other items on the lighter menu of the world's horrors, the unforgettable sliminess of Bill Cosby.'" I wish I could say any of this content feels out of date but miserably, all of it is evergreen. Even the Cosby part.

Without joy to cut the pain, we'd lose our minds. And without someone to say, as Ruffin does, "It is wrong for the President to incite violence against you . . . That is wrong, and you deserve better," or "what happened to Breonna Taylor was the product of a system made to protect the oppressor. And it's OK if that verdict knocked the air out of you," we might lose hope. Of course, to sweeten the sorrow, she breaks into a short rant at people who freak out about spoilers.

In summary, she says, "Spoilers don't exist anymore, you deserve to feel safe in your own country, f*ck an old lady, and most of all, I can't stress this enough, you matter."

Sometimes, Ruffin admits, it's tough to say what needs to be said. But as her show and "Wilmore" consistently prove, putting these truths out there with a frosting of humor tends to help.

New episodes of "The Amber Ruffin Show" and "Wilmore" premiere Fridays on Peacock.