Looking for America in Thanksgiving week: It must be here somewhere

On the road from D.C. to Missouri, I find a discontented and divided country — that doesn't even know what's wrong 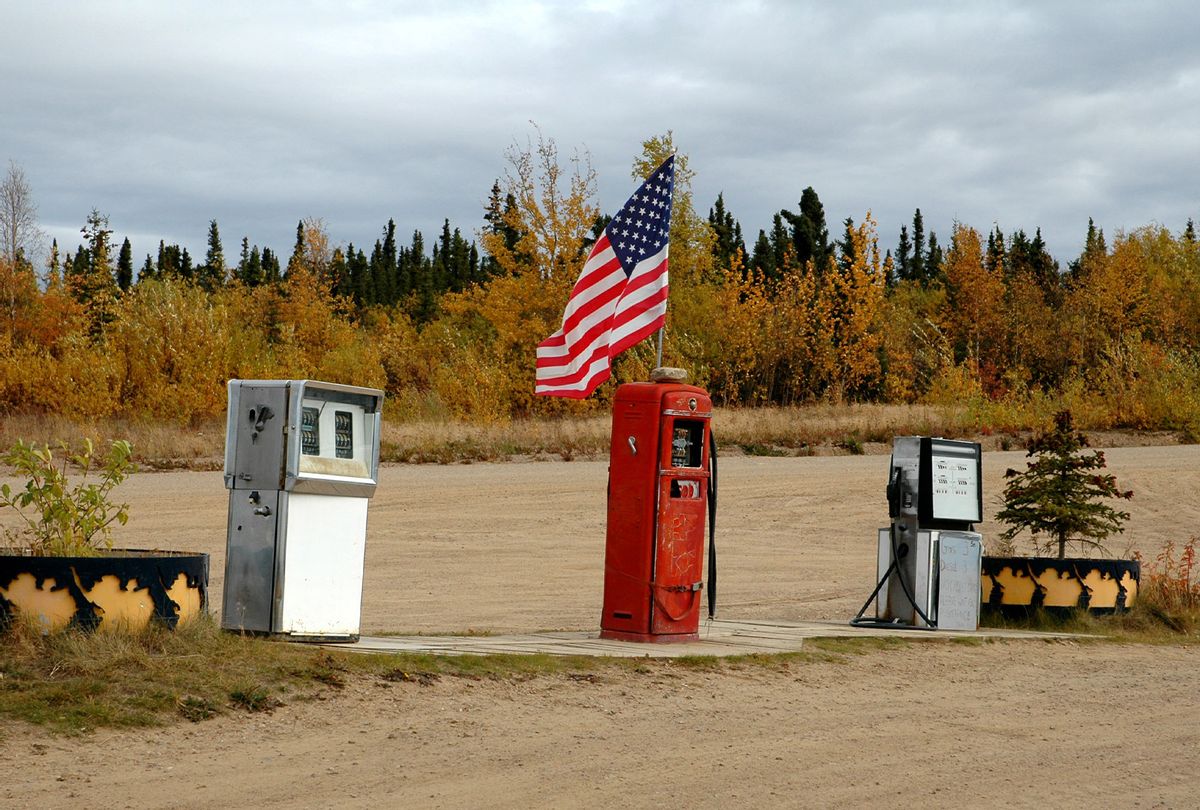 Driving halfway across the country to visit relatives in Kentucky and Missouri for Thanksgiving, I came to a sudden realization: I do not recognize America.

I wonder if I ever have?

I am the grandson of a Lebanese immigrant who came to the United States, he said, because it was the one place on the planet that let a man be what he wanted — where you weren't judged by class, religion or race. When I was a boy, my coach told me to trust and work with everyone on our football team no matter who they were or where they came from. "You may not like the guy next to you, but he's on your team and you will block for him."

I had a history teacher who preached "We hold these truths to be self-evident — that all men are created equal," and that we were all endowed by our creator with certain unalienable rights, among them life, liberty and the pursuit of happiness. That same teacher was vehemently against the Civil Rights Act and once proudly boasted," Queers don't belong."

I remember John Lennon singing "Give Peace a Chance" after John Kennedy, Bobby Kennedy, Martin Luther King Jr. and Malcolm X were assassinated and the Vietnam War raged. John himself was assassinated a few years later by a deranged fan.

I thought of that when I stopped to fill the tank at a gas station in Braxton County, West Virginia, along the I-79 corridor. The county is the home of a  70-year-old legend about an alien in a green hooded cape with glowing red eyes who looked like a character from an episode of "Rick and Morty." Local residents in 1952 supposedly saw a shooting star land on the side of a mountain and some kids who went up there to search claimed the alien appeared and scared the crap out of them. Some say it was a screech owl, flapping its wings while resting on a branch of a nearby fir tree. I suppose it depends on what you drank for dinner as to what you saw. But the local civic association embraces the myth and celebrates it every year in a local pageant.

The denizens of the gas station cheered the Kyle Rittenhouse verdict, which had just been announced, with the same energy. A clerk and a customer apparently knew each other well enough to agree: The verdict was  "good" and Rittenhouse "was a patriot." They also cheered Rittenhouse for killing white people, "so the n***ers don't get the wrong idea. It's not always about race."

"All we are saying is give peace a chance."

The following morning, at a diner in the St. Matthews area of Louisville, a multiracial and presumably heterosexual couple worried aloud about Rittenhouse's continued safety — not because they liked him but because they feared that if anyone harmed him, the wrong people would be blamed.

It was perversely funny driving through Kentucky. The University of Kentucky and University of Louisville have a rivalry fiercer than the Hatfield and McCoy feud. Louisville alumni are usually far more politically progressive than their Lexington cousins at the University of Kentucky. The Cardinals wear red. The Cats, blue. No self-respecting Kentucky fan would ever be caught dead owning anything cardinal red — at least, not until Donald Trump came a-courtin'. Now you understand the laughter when you see a Wildcat fan wearing a Cardinal Red shirt — no matter what slogan is printed on it.

The next day, on the 58th anniversary of the assassination of John F. Kennedy, I found myself at a Walmart in Columbia, Missouri, purchasing groceries and scheduling an eye exam while getting my tires rotated. I noticed the guy in line in front of me was purchasing an air rifle and a bottle of bourbon.

For no reason at all I then thought of JFK and remembered the first time I saw my mother cry. Me and Mom watched on our little black-and-white television as Jackie walked off the airplane with the blood from the president's fatal brain wound on her dress. Mom cried and it seemed as if the entire nation suffered a fatal head shot that day. Some would argue we never recovered.

While the delicious irony of the deep split in our country is best seen in the Kentucky/Louisville rivalry, the most dramatic example of it is seen on the I-70 corridor between St. Louis and Kansas City. Cruising into St. Louis on I-64 out of Louisville, you see plenty of oversized billboards that advertise Jesus, church, used cars, lawyers and public service.

You will also see an occasional "Buyer's Remorse Yet?" sign stuck up on a hay bale featuring a larger-than-life-size photograph of President Joe Biden.

A truck on the road might pass you with a sign that says "BBB — Bite me Bigly Biden" — which technically would be BmBB. We all know what a "Bm" is. It made me laugh.

In Missouri you see all the billboards you see in Illinois, and more: "There's Only One Religion" followed a half mile down the road with an ad for an exclusive gentlemen's club featuring "All the best nude girls." About a mile away a large billboard asks whether you've been harassed at work. It promotes the #metoo movement and suggests you contact a firm called Jungle Law. Then there are the numerous advertisements for gun shops, flu and COVID vaccinations, colleges and a cannabis dispensary — in a dual display with a Jesus billboard. "Got Jesus?"

In short, mid-Missouri is a combination of the final scene of "Easy Rider" and any road warrior scene from Mel Gibson's "Mad Max" movies, with a dash of Mel Brooks thrown in when you need a laugh.

Gas prices were at $3.49 a gallon leaving Maryland and in mid-Missouri they fell below $3. Still, everyone in Missouri complained. "See what you get with Biden?" I heard more than one person offer as free commentary. I didn't ask. They told me: "He's destroying this country."

A few staffers at a local grocery store in Columbia, wearing masks according to a corporate mandate, complained about doing so just because of "a few people who only got the snots," while praising Trump's efforts to develop a vaccine they refuse to take because they are convinced the government wants to track them. They spoke of Missouri making pot legal "with a card," meaning that medical marijuana is now legal and dispensaries are already popping up — but one woman said the government won't let you get a gun permit if you can buy marijuana. "They're afraid you'll get high and shoot people," as it was explained to me. You can still buy liquor and guns together. In fact, there used to be a store in Columbia called Liquor, Guns and Ammo.

I'm sure the schism in this country has been around since the founding fathers gathered in Philadelphia and tried to chart a path forward that would unite us and guide us into a future where self-government and democratic principles were accepted and revered. But as a boy, I was blind to this. Donald Trump not only made it socially acceptable to be the worst version of yourself, he ripped away the thin veneer of civility that enabled us to work and live side by side with relatives and friends who think differently than we do. Maybe I'm just naive.

Biden issued a statement expressing his disappointment in the Rittenhouse verdict, but also addressed the need to accept it and move on — without violence.. This may have kept down any angry backlash, but it certainly didn't address the bigger problem: This country has two different ideas of justice — one for white people and one for everyone else. At the end of the day, I sat talking with a young man and woman who are college students at Mizzou. They said they hoped Rittenhouse would die. "But that's what the other side says," the young woman said in addressing her own hypocrisy. "I know I'm wrong, but they get away with injustice. Who's going to be the better person? Why do I have to be?"

Today we're too busy being angry, too angry, at how busy our enemies are. Most of us are convinced we're walking victims with open sores. "We didn't have free education like the president wants," the gray-haired white man said while sitting at his bar stool. He was talking about the Build Back Better agenda and the infrastructure bill — saying the passing of one was stupid because "we already are the greatest country in the world," and bemoaning the other because "I learned to pull myself up by my own bootstraps and so should everyone else." A white-haired white woman sitting next to him remarked that it takes more to get ahead in the world than it used to, while another aging white man chided the first. "You got a student loan to go to school, so shut up."

As it turns out, that's why it is hard to recognize America.

We claim to be one thing.

Some of us aspire to liberty. Some believe freedom doesn't include responsibility.

Some are angry, resentful and petulant.

Those people live in a dystopia of their own mind.

I don't recognize America because I don't recognize dystopia. My grandfather's words stick in my mind more than 50 years after I first heard them. And I give thanks this year for them: You could build a nation with those sentiments

More from Brian Karem on the troubles and travails of the Biden White House: