A report from the world's most buzz-killing holiday party guest 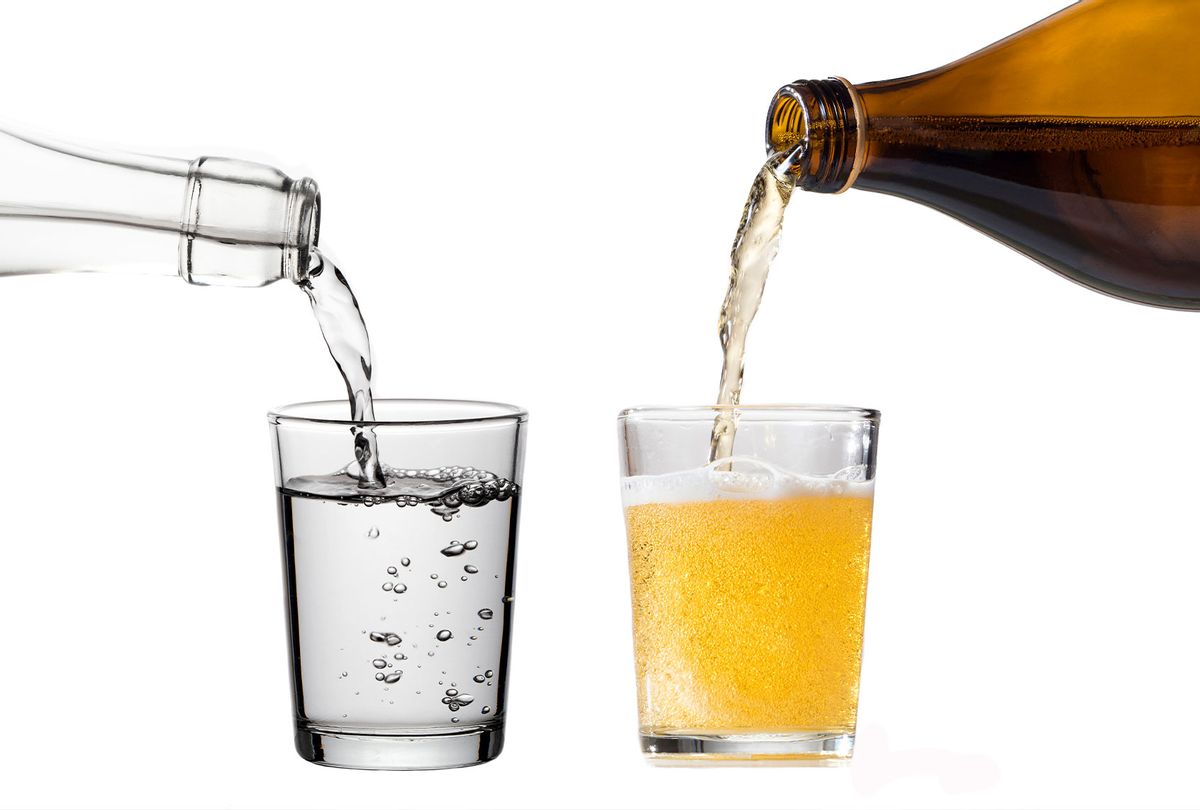 Glass of beer and a glass of water (Getty Images/Jose A. Bernat Bacete)
--

During my junior year of college, I spent a semester in London, where I met a guy—I'm going to call him Jimmy—who became my boyfriend for the four months that I was in England. We would sometimes take the train a few hours north to his hometown and stay with his sister, who let a heroin dealer work out of her council flat in exchange for cash, which helped her support herself and her baby while her husband was in jail for thieving. (The baby was well cared for—you can jettison that scene in "Trainspotting" from your mind.) The flat was something of a hangout, and I would watch as everyone but Jimmy (including his sister) snorted dope and then nodded out, typically on the living room couch. I could tell when Jimmy was high, but he knew that I didn't want him to be, so he never let me see him with the little tube in his nose.

This was my thinking: I was in another country, which may as well have been another galaxy, where, like the rules of physics, the rules of Nell didn't apply, plus I really liked Jimmy, so I could handle a stoner boyfriend for four months. But anyone who knew me back in the States would have thought I had caved, given that I was straight edge at the time, as I've pretty much always been.

I was already like this when I saw the phrase in an issue of Maximum Rocknroll when I was a teenager and understood, in a eureka flash, that I wasn't the only person alive who thought that getting drunk and stoned was wimpy. When I finally read the lyrics to "Straight Edge" by Minor Threat, the DC punk band whose 1980 song shellacked the straight edge ethos into receptive young brains, I was reassured, and even a little comforted, that my reasoning aligned with theirs:

I've got the straight edge

I've got the straight edge

The nifty thing about Minor Threat's case against drinking and drugging was that they didn't recycle the reasons that boring politicians were pushing, namely the health and safety risks (which, it must be said, are good reasons). Instead, Minor Threat was making a principled argument ("Never want to use a crutch") and that was incredibly sexy to a self-important teenager who was maybe a bit too caught up in the idea of being taken seriously. But after I met Jimmy, I had to admit that the Minor Threat logic wouldn't work on everybody.

RELATED: Is the pandemic making us sober up?

I knew Jimmy in the late 1980s, when jobs were hard to come by in England. Jimmy, who was in his early twenties, was on the dole and, like his sister, had been given a council flat, although I don't think he ever set foot in it. Without jobs or much in the way of prospects, the people at Jimmy's sister's place — who, with maybe one exception, didn't have parents who could swing a college tuition for their kid, as mine could — arguably didn't have, as Minor Threat put it, better things to do than drugs. And maybe they didn't know that they could cope without them. If I had a husband in jail and a baby to care for on my own, I might reach for the heroin too.

Meanwhile, the same-age people I knew who did drugs and got shit-faced back in the States were middle-class (like me) and up; these were the people that Minor Threat, and Black Flag and the Descendents, among other spectacular punk bands with anti-drink or -drug songs to their names, were singing for and about. A recurring theme was the way that being drunk or stoned gave people unearned courage, and I agreed that this was cheating. I remember once describing something goofy that I'd done—this was during the period when I might sing a self-parodying song while a friend filmed it—and getting the reply, "Wow, you must have been really drunk." Managing to do something funny/stupid that other people wouldn't or couldn't do without booze or drugs was a source of pride for me. Hey, I can achieve dork liftoff without any help!

Some of what I found myself disliking about drinking and drugging didn't make it into any punk rock lyrics that I'd heard. I disliked drunk/stoner braggadocio ("I was so wasted last night…"). I disliked the too-easy woots generated whenever a talk show host made a joke about tying one on or getting buzzed. Having said that, I do understand that the risk of irritating me is not a good reason for you to skip doing drugs; you'll do better with old standbys like the expense, the shrunken attention span, and dope's libido-killing potential. (Long before I was reading the lyrics of Minor Threat, I read my generation's debauchery bible, Tony Sanchez's "Up and Down with the Rolling Stones," and learned a ton.)

But the key reason that I don't drink or take drugs is probably this, and it's a little embarrassing: I've always pictured a little scrim coming down over people's faces when they get drunk or stoned, after which point I've lost my unfettered access to them. Whenever Jimmy was off his knob, it felt as though he'd been taken away from me, like a Stepford wife in a shell suit. And was there any other way to interpret his decision to get stoned in my presence than that I was less fun than heroin was? The line "I'd rather drink than fuck" in Gang Green's "Alcohol" always made me nervous: Might I one day have a boyfriend who would prefer to get drunk than sleep with me? More to the point: If I'm sufficiently interesting, shouldn't another person be unmotivated to get bombed in my company? And could it be that my decades-long full-bore commitment to straight edge is as much tied to my ego as to some larger principle?

I've been on the other side of the scrim just once. The first few times I tried to get high, there was no effect. I learned a new line in the Lothario playbook: whenever I told a guy about my latest botched attempt with pot, he'd say, "I'll get you high." And it was a guy — a couple-years-older high school classmate I didn't know very well — who finally got me stoned. He took me to an outbuilding of some sort behind his suburban Boston home, and once he had gotten me, and presumably himself, high, I couldn't stop crying. Even though I was the one bawling, he told me that he wanted to be held, and I obliged, and yes, I, too, am surprised that this encounter didn't conclude with my molestation. What it concluded with was my understanding that the prospect of losing access to my good, clear mind was mortally terrifying. I've never wanted to escape myself—never nodded along with the refrain "I'm too much with myself / I wanna be someone else" from Evan Dando's plangently beautiful Lemonheads song "My Drug Buddy." The problem I had with being stoned was the opposite: not being able to find myself once that scrim came down.

Maybe it's partly in the wiring. When I was in high school, I had a friend who paid a lot of attention to the clinical terms that her psychologist mother tossed around, and one day this friend informed me that I was hypomanic—essentially, someone who's neurotically cheerful all the time. I didn't believe this was a real, operational term until I stumbled on it a few years ago. But even if the term doesn't apply to me, maybe having an involuntarily chipper disposition and what seems like an inexplicably large supply of self-confidence is like having parents who could afford to send me to college: a leg up that makes choosing to be straight edge a luxury. (This, combined with the usual do-gooder liberal reasons, is why I voted for legalization when Massachusetts put pot on the ballot a few years back, incidentally.)

For me, the only downside of being straight edge is that it can be a little lonely; none of my friends are, and my husband isn't. But it's a desperation-free loneliness—not at all like what I felt whenever Jimmy was out of his brains: I would look directly at him and not be able to find him anywhere.

More stories on sobriety from Salon: