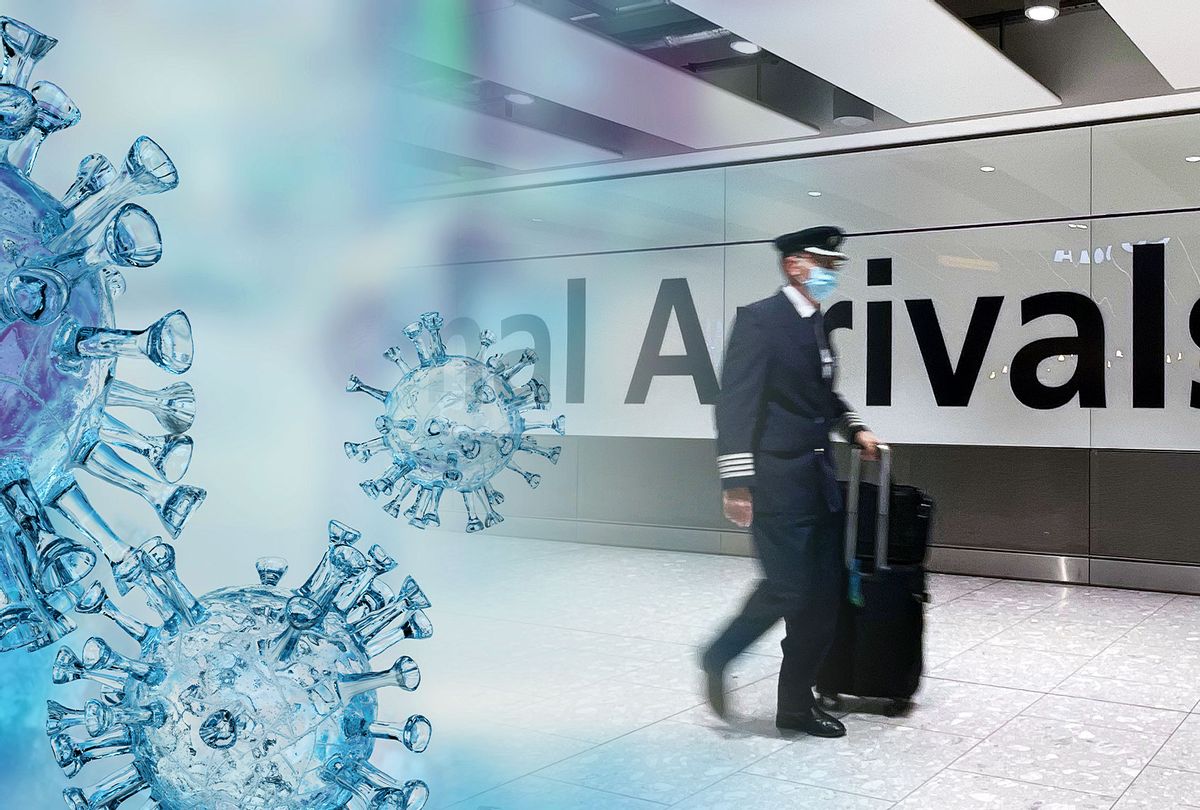 Coronavirus, COVID-19 spores | A member of a flight crew walks through the arrivals area at Terminal 5 at Heathrow Airport on November 26, 2021 in London, England. (Photo illustration by Salon/Getty Images)
--

Though it is a truism in biology that most mutations are detrimental, once in a while a mutation comes along that helps a biological agent survive. In the case of a virus like SARS-CoV-2, these successful mutations often make the virus more transmissible, or improve its ability to evade the vaccine. Case in point: The delta variant, which has become the dominant strain just about everywhere on Earth, and is slightly more vaccine-resistant than previous variants.

Delta spawned fear of a second wave of the pandemic, and further fears that subsequent mutations might flourish. And while more mutations have indeed surfaced, including the mu variant and one subsequent delta mutation known as delta plus, none have been able to outcompete the highly transmissible delta variant.

Until now. In the last week of November, scientists believe that viable competitor to delta has perhaps arrived. It is known as B.1.1.529, or the omicron variant. If it outcompetes delta, it could usher in a third wave of global business closures, booster shots, and changes to everyday life for humans around the world.

Ever since the World Health Organization (WHO) designated omicron as an official "variant of concern," many countries — including the United States — have closed borders to nations where the variant has been identified. The Centers for Disease Control and Prevention (CDC) has also strengthened its recommendation that citizens get booster shots, although the variant has yet to be detected in the United States. Currently, all individuals over the age of 18 are urged to get a booster shot either when they are 6 months after their initial Pfizer or Moderna series or 2 months after their initial Johnson & Johnson vaccine.

"The recent emergence of the omicron variant (B.1.1.529) further emphasizes the importance of vaccination, boosters, and prevention efforts needed to protect against COVID-19," CDC Director, Dr. Rochelle Walensky said in a statement. "Early data from South Africa suggest increased transmissibility of the omicron variant, and scientists in the United States and around the world are urgently examining vaccine effectiveness related to this variant."

Indeed, as Walensky alluded to, these are preventative measures.

"There is so much we don't know, so I don't want to jump to any hasty conclusions," said Joseph Fauver, a genomic epidemiologist and assistant professor at the University of Nebraska Medical Center. "But I can say pretty confidently the reason why folks are ringing alarm bells over this is the really high number of mutations in the mutational profile."

Across the entire genome of the variant, there are 50 mutations; 32 are in the spike protein, which is implicated in the virus' ability to attach and gain entry into human cells. These mutations are shared with other variants of concern, Fauver said.

Fauver described a mutation in part of the virus, known as the "501 position," that could make the virus more efficient at infecting cells.

According to a study not yet peer reviewed, a separate mutation that omicron shares with mu and alpha may help the virus replicate faster.

Most of the current vaccines train the human body's immune system to recognize a specific spike protein on the coronavirus, which is how we build protection against the virus overall. However, many modifications to the spike protein could result in the body no longer being able to recognize the spike protein vis-a-vis the current vaccine — hence, the potential for re-infection among the vaccinated. If that proves to be the case, vaccine-makers may have to re-engineer the way that their vaccine works.

Still, it is not known yet if this will be necessary, as there is a difference between observations of the genomic makeup of a variant and observations of its behavior in the real world.

"The 32 mutations across the spike protein doesn't mean that it evades immunity, but it is the most [mutations] we've seen," said Monica Gandhi, infectious disease doctor and professor of medicine at the University of California–San Francisco. "It also seemed like in one region in South Africa, cases [of omicron] are going up really fast — it's really just dominating the screens there — and that made some people say, 'it looks like this is really transmissible' because we thought that delta was the pinnacle of being transmissible right now."

Researchers estimate that the R-number was 1.47 for South Africa as a whole, but was 1.93 in the Gauteng province — which includes Johannesburg and Pretoria — where nearly 80 percent of the new cases were clustered. The R-number, which is considered a measure of a virus' infectivity, is a measurement of how many new people are infected from each case, on average; for instance, an R-number of 1 would imply about 1 additional person is infected for every new case. If an R-number is below 1, a virus will eventually die out. The most infectious diseases have very high R-numbers; measles' is about 15.

The rapid rise in cases in South Africa prompted researchers to investigate and identify the omicron variant, which appears to have emerged in Botswana.

"The Ministry of Health and scientists in South Africa acted quickly on this information to target genome sequencing of positive samples from people who were PCR test positive in Gauteng province," said Sharon Peacock, a Professor of Public Health and Microbiology, University of Cambridge, in a statement. "This identified a new variant B.1.1.529, which has a very unusual constellation of mutations and a mutation profile that is different from known variants of concern."

In Portugal, 13 cases of the omicron variant were tied to the Belenenses soccer club after a player returned to Portugal from South Africa. Before a game on Saturday, 17 players and staff members of the Belenenses club tested positive for the COVID-19; at the time, it was unclear whether those cases were a result of the omicron variant. Reports state that all the players were vaccinated, meaning they were breakthrough cases.

As health experts have warned before, the end-game of the pandemic is likely endemicity — meaning that the coronavirus will ultimately be like the common cold or flu.

While an increase in transmissibility for omicron will be a cause for concern, that detail remains unclear.

"I think we're still waiting to hear more about virulence, and is omicron transmissible everywhere — or is it more transmissible in a very low vaccination country?" Gandhi asked, noting only 25 percent of South Africa is fully vaccinated. "I think we're not positive that it outcompetes delta, because if we really look at what happened with delta plus, in India and the UK there were clusters of cases that seemed to be rising. It appeared to be more transmissible, but then it wasn't able to outcompete delta."

But can omicron evade vaccine-induced immunity? Researchers still don't have an answer to that either.

"We have to give a little more time to the scientific community to do testing," said Sasan Amini, founder and CEO of Clear Labs. "Over the next couple of days or so we should have a lot more clarity around the infectiousness, and also the immune evasion."