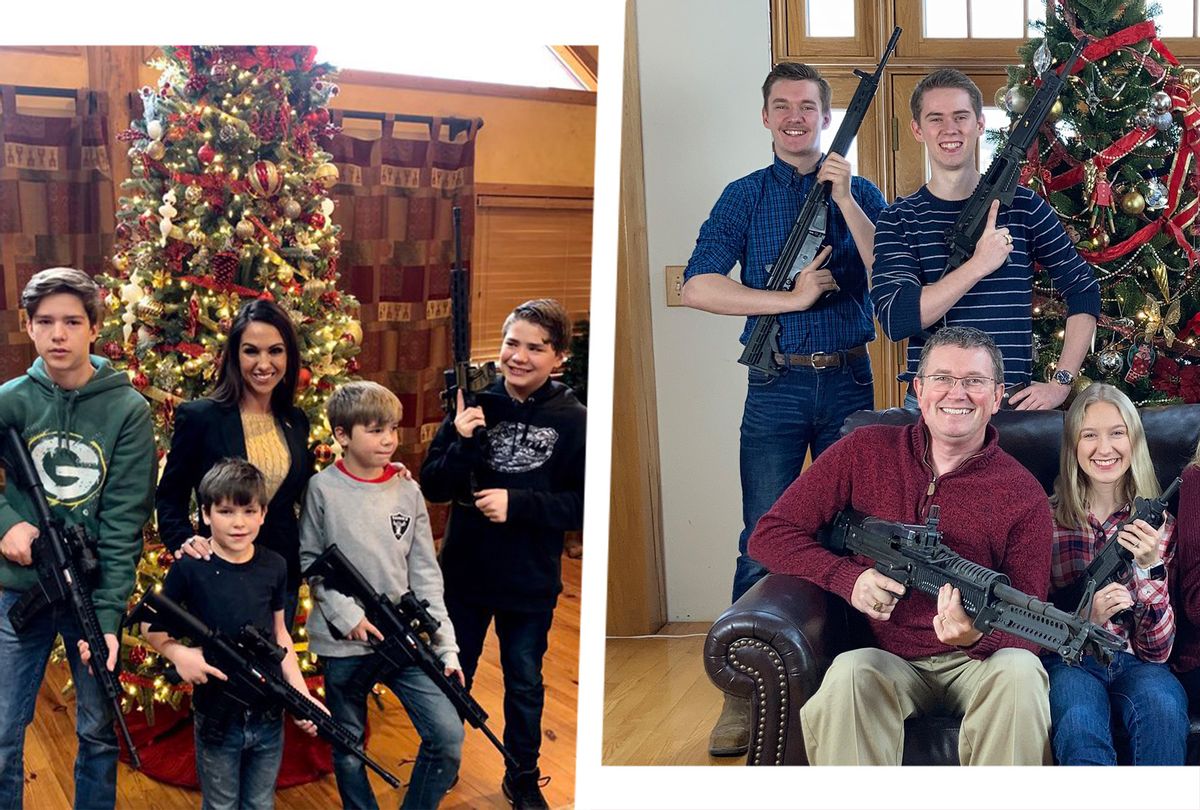 From left to right: Gun-toting Reps. Lauren Boebert and Thomas Massie with their families. (Photo illustration via Twitter/Salon)
--

Rep. Lauren Boebert, R-Colo., sparked a new firestorm on Tuesday after tweeting a photo of her young children armed with rifles in front of a Christmas tree.

Boebert, who along with her husband has a history of domestic violence charges, published the photo in response to a similar Christmas-themed snapshot from Rep. Thomas Massie, R-Ky., just days after a teenage gunman killed four schoolmates and wounded seven others in Oxford High School in Michigan.

"The Boeberts have your six, @RepThomasMassie!" Boebert tweeted along with a photo showing her young children holding rifles. "No spare ammo for you, though," she added.

Rep. Alexandria Ocasio-Cortez, D-N.Y., mocked Boebert for posting the photo after "all the years Republicans spent on culture hysteria of society 'erasing Christmas and its meaning' when they're doing that fine all on their own."

"Tell me again where Christ said 'use the commemoration of my birth to flex violent weapons for personal political gain?'" she tweeted.

Massie was roundly condemned for publishing the photo just days after the Michigan school massacre.

"I promise not everyone in Kentucky is an insensitive asshole," wrote Rep. John Yarmuth, D-Ky.

"This is a tragedy waiting to happen, and we should all be concerned for the Boebert kids," tweeted Shannon Watts, the founder of the gun safety group Moms Demand Action. "There is a history of domestic violence in their home, and the Congresswoman has bragged that her guns are unsecured. This photo is exactly why we must keep fighting for stronger gun laws."

Boebert's husband Jayson, who was not included in the photo, was once arrested on a domestic violence charge for attacking Boebert while they were still dating and served seven days in jail. Boebert, who was 17 at the time, was charged with assault herself just months later when police said she attacked Jayson. Jayson earlier that year pleaded guilty to public indecency and lewd exposure after he allegedly exposed his penis to two young women at a bowling alley. The congresswoman has also had a long history of brush-ins with the law.

Boebert, one of the most far-right members of Congress, currently faces potential sanctions by the Democratic-led House over anti-Muslim comments she repeatedly made about Rep. Ilhan Omar, D-Minn.

"I was getting into an elevator with one of my staffers and I see a Capitol police officer running to the elevator," Boebert said at an event last month. "I see fret all over his face … I look to my left, and there she is: Ilhan Omar. And I said, 'Well, she doesn't have a backpack, we should be fine.'" Boebert also said Omar was part of the "jihad Squad."

Omar said the story was made up and said it was "sad she thinks bigotry gets her clout."

Rep. Ayanna Pressley, D-Mass., plans to introduce a resolution backed by nearly a dozen House progressives on Wednesday to strip Boebert of her committee assignments over repeated anti-Muslim comments.

"For a Member of Congress to repeatedly use hateful, anti-Muslim rhetoric and Islamophobic tropes towards a Muslim colleague is dangerous. It has no place in our society and it diminishes the honor of the institution we serve in," Pressley said in a statement to the Washington Post. "Without meaningful accountability for that Member's actions, we risk normalizing this behavior and endangering the lives of our Muslim colleagues, Muslim staffers and every Muslim who calls America home."

It's unclear whether House Speaker Nancy Pelosi, D-Calif., who criticized Republicans for not disciplining their own members, will put the resolution to a vote. More than 400 congressional staff members signed a letter on Tuesday calling for House leaders to "categorically reject the incendiary rhetoric" from Boebert.

"As passionate public servants, we each have chosen to pursue a career in public service to work towards a better future for our country," the letter says. "However, the recent remarks by Rep. Boebert have heightened the climate of Islamophobia on the Hill, creating a feeling of anxiety and fear for many Muslim staff, our families, and communities, and leaving many of us to look to our congressional leaders for support."