CPAP nation: Why millions of Americans willingly go to sleep with a hose strapped to their face 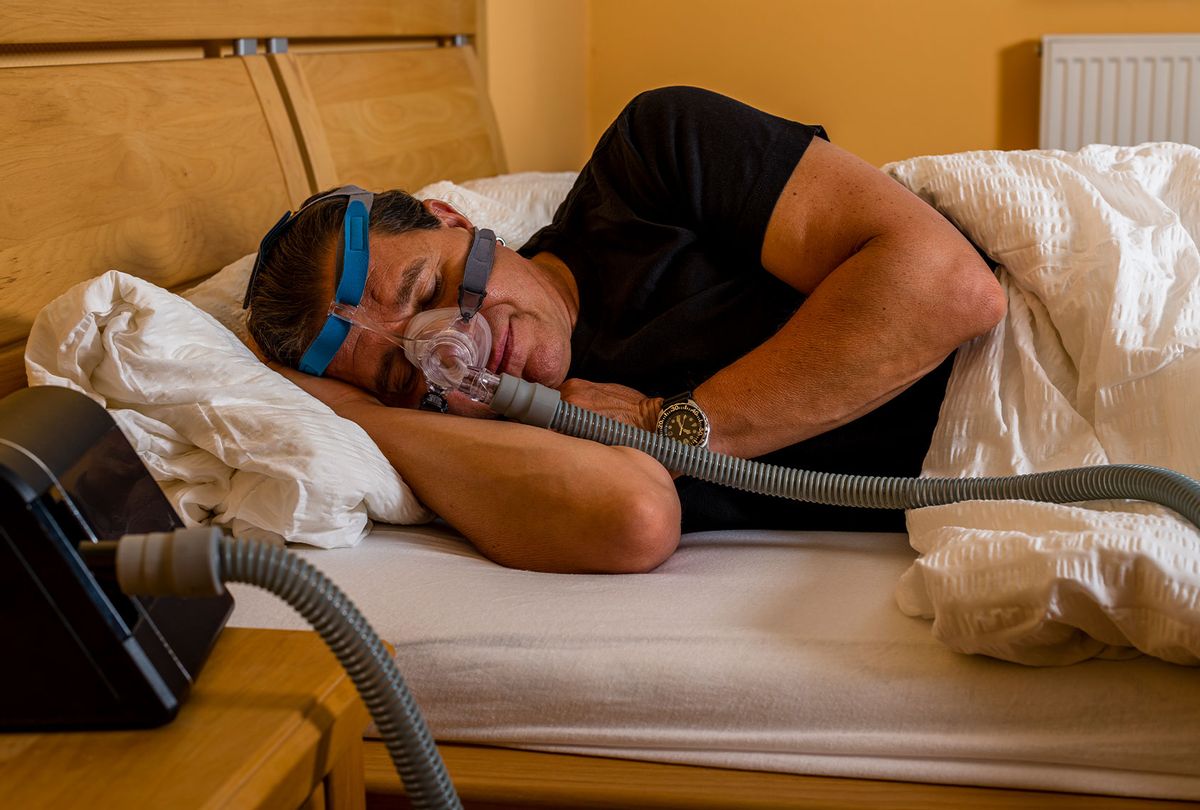 The only way I can fall asleep is if I look and sound like Darth Vader, at least in my mind — and my doctor supports that.

This is not some strange cosplay fantasy. I'm merely one among millions of Americans who needs to use a machine known as the CPAP (short for Continuous Positive Airway Pressure) in order to sleep. After being diagnosed with obstructive sleep apnea — a condition in which your trachea collapses when you try to breathe while lying down, making it impossible to attain quality sleep — my doctor explained that a CPAP could keep my throat open. Naturally I was excited at the prospect of not feeling exhausted all day, but that joy quickly turned to dread once I strapped on my CPAP mask.

CPAPs work by forcing a constant level of air pressure greater than atmospheric pressure into your upper airway. The machine includes a small device roughly the same size as a radio alarm clock, albeit with a water chamber on one side (to limit daytime feelings of dryness). The main device is attached to a hose and that, in turn, is connected to a mask which is strapped to your head. There are different types of masks to cover your nose, mouth or some combination of the two; patients are encouraged to choose whichever one feels most comfortable. I went with a nasal mask, but for the first few nights I couldn't resist the urge to rip it off of my face. Other CPAP users had complained to me of feeling constricted and unable to toss and turn while attached to the machine; or having dry mouth when waking up; or hating the feeling of the straps against their skin. For me the problem was visceral: That nasal mask triggered an instinctive fear of suffocation.

"There are two common complaints I hear from people that have recently been prescribed a CPAP machine," Bruce D. Forman, PhD, a psychologist practicing in Weston, Fla. who specializes in treating insomnia, told Salon by email. "The first is that the mask itself feels uncomfortable. The second is the sense of being suffocated."

Despite these concerns, Forman and other doctors urge patients who were prescribed a CPAP after a sleep study to not give up on them. Obstructive sleep apnea is more than an inconvenience; sufferers are at a high risk of elevated blood pressure, heart disease, strokes, diabetes, Alzheimer's disease and a number of mental illnesses. While some people can correct their apnea with lifestyle changes like weight loss or surgery (one method, an "Inspire" implant that moves the obstructions out of the way, is garnering increased attention), most will be prescribed a CPAP because the machines improve health outcomes despite their drawbacks. This puts many patients in the difficult position of struggling to sleep while feeling physically and psychologically uncomfortable with their appliance.

For patients who dislike the "tactile sensations" of feeling the straps or mask against their face, Forman suggests that patients practice wearing their mask so they can grow accustomed and be desensitized. (He also has found meditation and relaxation can increase their sense of comfort.) Sometimes patients need to switch their masks; each nose and mouth has a distinct shape and size, so your discomfort may simply mean you haven't found the right fit. Similarly, if a patient feels they are suffocating, it could mean their machine is not ramping up the air pressure quickly enough, and that can be corrected by adjusting the CPAP machine. (Forman noted that he hasn't heard complaints about being suffocated for a while, which he attributes to how "the older CPAP machines had to have pressure set based on sleep study results.  The newer machines are self-regulating.")

Patience also helps. Thomas Fasham, a 63-year-old male and retired government worker, told Salon in writing that he has had his share of troubles with his CPAP. At first he struggled to get used to it and learn to breathe correctly while wearing it. Traveling is still a problem, as they take up space in luggage and "TSA agents give them a long look." Obviously they are rendered ineffectual on nights when Fasham loses power.

Yet after about a month, Fasham was able to make the necessary adjustments to his breathing, meaning that least the CPAP has been able to do its main job. Now he has been using it for 10 years and describes himself as "addicted." He doesn't fall asleep during the day and gets restorative rest at night.

Forman, who also uses a CPAP, found that he struggles with the feeling of the straps on his face. To acquire the mentality that he would have to use to beat this, he applied his knowledge of horses to his own predicament.

"Part of breaking horses involves putting a bridle on the horse and leaving it there till the horse is comfortable with it," Forman explained. "At first, it drives the horse kind of nuts, but in time gets accustomed to it being there and eventually is not even noticeable."

Michelle Strauser, a 61-year-old woman in Westerville, Ohio, told Salon by email that she probably owes her life to the fact that she was able to overcome her initial difficulties and get used to a CPAP. Before she started her therapy in 2011, she felt constantly exhausted and would try to nap whenever possible. After waking up in the morning, she had terrible headaches. No amount of sleep ever helped her feel rested. Yet that does not mean she immediately embraced the CPAP.

"I will admit that using a standard CPAP machine for the first two years was a nightmare," Strauser explained. "I'd wake up to find that I'd taken the mask off in my sleep. Have you ever blown (gently) in a baby's face? I felt like that – like it was stealing my breath and I'd start to panic. I couldn't use it spring or fall during allergy season at all, due to my congestion. It was awful and I really struggled with wanting to just give up."

Strauser said that things turned around when started using an auto-CPAP, which automatically adjusts to a person's breathing needs as it changes throughout the night, and became more adept at changing the settings of her machine. Now she is done with the raccoon eyes that used to beset her, and morning headaches and weekend fatigue are rare. That does not mean she loves the CPAP, though.

"I can't say that I 'love' my CPAP therapy – who really wants to sleep wearing a mask, with air blowing in your face all night long?" Strauser wrote. "Struggling with the placement of the hose every time you roll over, and dealing with the leaks because changing your position changes how the mask sits on your face? Blech."

Not everyone has to make those adjustments. The first patient to ever use a CPAP — a man who did so because the alternative was a tracheotomy, in which doctors would have punched a hole in his throat — was overjoyed after his maiden voyage. There are also people like Steve Ogden, a 66-year-old male who works as a financial advisor in a small town.

"I was very lucky, no issues at all," Ogden wrote to Salon, adding that he only experienced "a little discomfort" in the beginning and hasn't missed using his CPAP in over a year. "While it took a while (a few weeks, not months) to sleep through the night, the 45 events per hour going away was more than a good trade off." He described how he used to feel so lethargic that he would require naps throughout the day. After a sleep study revealed that he had been deprived of restorative sleep for at least a couple decades, Ogden found that the CPAP "changed my life. Today, I wake with energy, feel more motivated and alive, and don't need the naps as I used to. My productivity has improved dramatically and so has my mental health. Now, instead of struggling to get through the days, I enjoy working again. It's truly amazing."

Since I was closer to Fasham, Forman and Strauser than Ogden in my CPAP experience, I did have to learn to get past the psychological angst of wearing the mask. My trick? I channeled my inner "Star Wars" nerd. If you listen carefully while breathing with a CPAP, it almost sounds like Darth Vader's iconic inhales and exhales. By concentrating on seeing if I could match my breathing to the sounds of the character, I distracted myself from my CPAP anxiety and managed to drift off to sleep. Now it has became a routine.

Since it works, my doctor has no complaints.