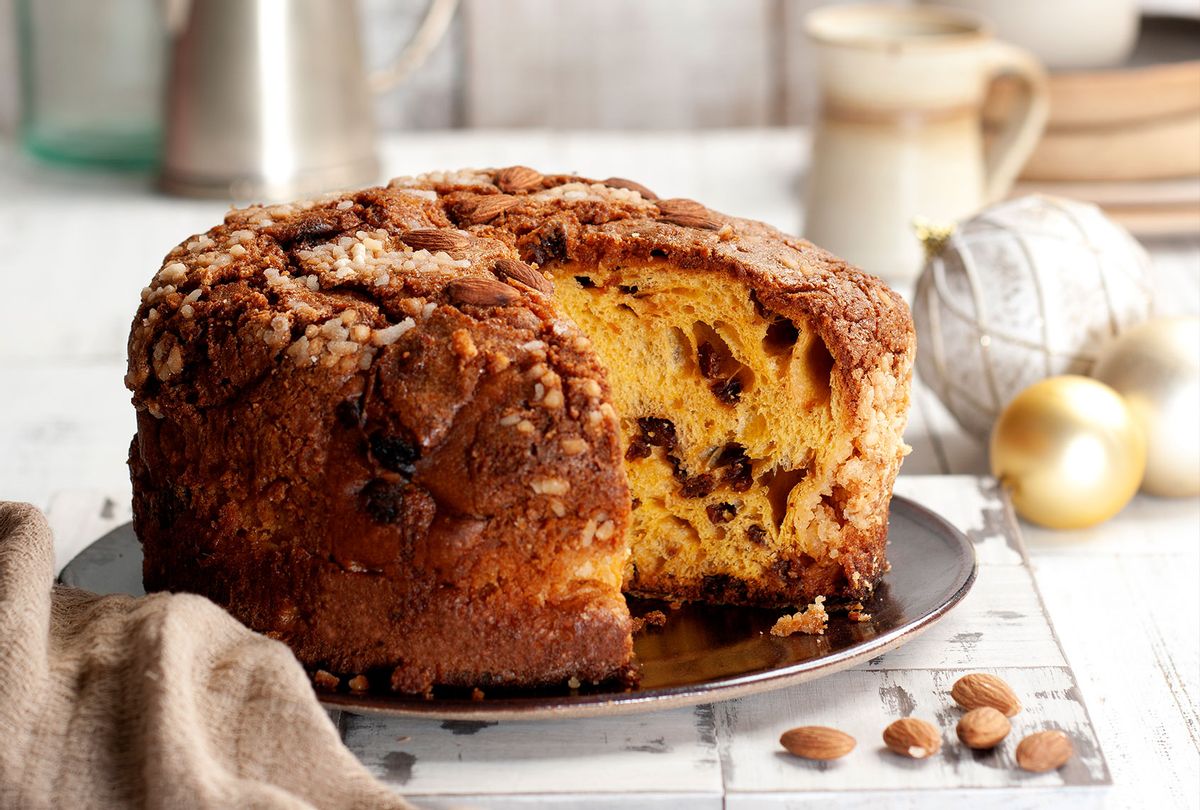 As a child of the Midwest suburbs, my first introduction to panettone, a traditional Italian holiday bread, was definitely within the aisles of a T.J. Maxx. Starting in early November, tall boxes, often in jewel or metallic tones with a little ribbon affixed to the top as a sort of handle, begin to pop up on the department store's shelves. They remain there in the holiday rotation until they're slowly pushed out for Valentine's Day candy.

While panettone of this provenance has its fans, there are inevitable detractors — and they've got jokes. "Moist and fresh is a bit of a stretch," one Twitter reviewer wrote, referring to a slogan on the bread's packaging. Some provided riffs on Johnny Carson's classic "There's only one fruitcake in the world" bit, while one blogger described it as tasting like air freshener.

I wouldn't go quite that far, but there is something artificial-tasting about the department store (and even some of the supermarket) varieties. I would hear and see people rave about their annual panettoni, but the few that I had purchased off the shelves had a dry exterior and a crumb that flaked into cardboard-like strips when cut. "Just must not be for me," I thought.

This year, I enjoyed a pair of fresh panettoni — made in Arzignano, Italy, and imported within two days — and I'm a complete convert. Bring on the panettone-themed earrings, sweatshirts and OPI nail polish. This is the Christmas dessert for me. The two that I had — a classic panettone packed with dried fruit and a chocolate chip-studded variety — were incredibly light and pleasantly sweet like an airy brioche. The aroma of candied citrus, butter and gently caramelized vanilla was immediately apparent upon opening the boxes. There was nothing heavy or artificial (read as: air freshener-like) about them.

RELATED: Lidia's chocolate chip cookies are an easy Italian spin on the classic

I spoke with lead pastry chef and bakery owner Nicola Olivieri of Olivieri 1882 about his process for making panettone and how his product differs from many of the shelf-stable versions found in the U.S.

"The first and most important part of the panettone process is taking care of the lievito madre (mother yeast)," Olivieri said. "This is the base of our dough, and by extension, the base of our panettone. We have an entire team completely dedicated to taking care of it — it takes almost a full day to be ready for the panettone dough, and we mix it three times per day at a very specific temperature."

Once it is ready, Olivieri said, the first batch of dough is mixed. It then rests for about 14 hours in a fermentation room until it triples in volume. The dough goes back into the mixer with the remaining ingredients, such as dried fruit or chocolate. Once everything is well-mixed, it is allowed to rest. Then it is shaped and placed into a paper mold.

"Then we let it rest again in the fermentation room at a low temperature for a full 24 hours," he said. "This is followed by the scarpatura, a typical artisanal work which involves scoring the superior part of panettone in four parts as a cross. Then they go directly to the oven to bake. Once baked, they rest for 14 hours upside down to avoid collapsing due to the high amount of butter and the presence of only mother dough as a yeast."

According to Olivieri, since his panettone has that long fermentation time, it has a "really soft, fluffy texture that is completely different from the dense and often dry ones you find in department stores."

The difference in taste is immediately noticeable, as is the difference in price. You can sometimes find season-old bargain panettone at stores for as low as $1.99; Olivieri's are around $75 each. Customers also need to plan on eating them within a few days of their arrival. Since they aren't packed with preservatives, they won't last forever.

And indeed, after a few days, the lingering few slices began to slightly harden around the edges. No worries, though — that's your cue to make panettone French toast, the ideal day-after-Christmas breakfast.