The meaning of words: Orwell, Didion, Trump and the death of language

Orwell wrote that political speech was "largely the defense of the indefensible" — in 1946. Little did he know 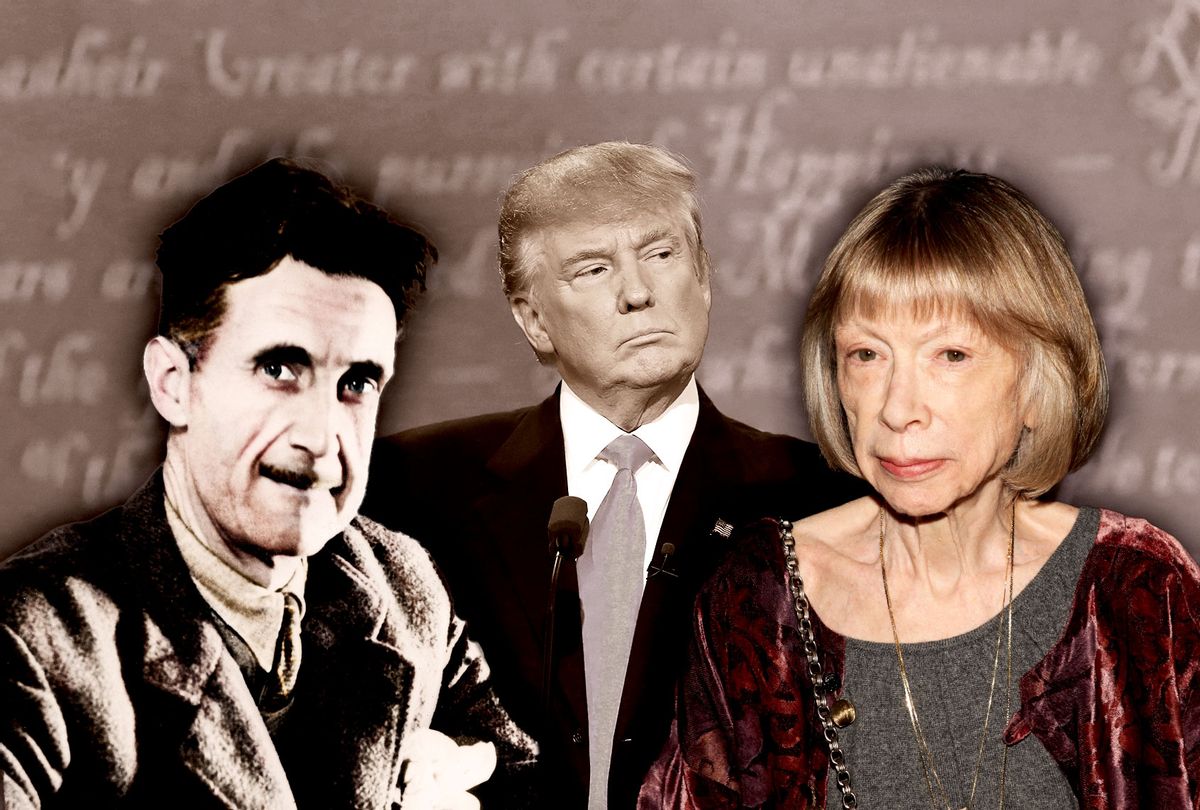 The death of Joan Didion, the most profound essayist about language since George Orwell, comes at a time when one of her most astute observations — that words have meaning and consequences — is being ignored more than ever before.

Nowhere have words lost their meaning more than in social media, where, for instance, a respondent to a story on the Breitbart "news portal" can without consequence accuse Dr. Anthony Fauci, one of America's most distinguished public servants, of having "aided in engineering this bioweapon (Covid-19)" and then claim, in fittingly garbled syntax, that Fauci "financially gains from it, is now dictating the societal and economic aspects of people [and] is beyond disgusting. This little man has far too much unelected power to even be."

Fauci factually has done none of these things, nor, as other conspiracy theorists have claimed, is there a basement under a pizza parlor in Washington where politicians can drink the blood of children, a proposition that would be obvious nonsense to anybody who has ever actually tasted a fair amount of real blood.

"We welcome thoughtful responses and inputs," Breitbart's editors say at the top of their comments section. "Comments with personally identifiable information, harassments, or other violations will be removed."

"Now, it is clear that the decline of a language must ultimately have political and economic causes: it is not due simply to the bad influence of this or that individual writer," Orwell wrote in his 1946 essay "Politics and the English Language." But, he continued,

an effect can become a cause, reinforcing the original cause and producing the same effect in an intensified form, and so on indefinitely. A man may take to drink because he feels himself to be a failure, and then fail all the more completely because he drinks. It is rather the same thing that is happening to the English language. It becomes ugly and inaccurate because our thoughts are foolish, but the slovenliness of our language makes it easier for us to have foolish thoughts. The point is that the process is reversible.

No one has contributed more to this than the former president of the United States, Donald Trump, whose every pronouncement seemingly took wing from reality. The Washington Post fact checker on Jan. 21, 2021, the day after his presidency ended, reported that Trump had accumulated 30,573 verifiable untruths during his presidency, averaging about 21 erroneous claims a day.

But the twice-impeached ex-president of course is not alone. Far too many politicians accuse Democrats of wanting to unleash felons onto the streets. Far too many others accuse Republicans of fascism, although the ominous rhetorical tilt seems to go to the Republicans. It was Newt Gingrich who, from the time he was elected to the House of Representatives, called the rather dull speakership of Democrat Jim Wright of Texas "the most corrupt in history" when it was no such thing. He continued to pound away at supposed corruption in the administration of Barack Obama when not a single indictment occurred during the eight years of Obama's presidency.

The result of the tsunami of untruths was not only a ferocious and specious defense of an administration that began in 2016 and ended in 2020 and turned disasters into triumphs with nothing more than words. It was to debase the language to make it lose its meaning. If thought can corrupt language, Orwell said, language can also corrupt thought. There seems no better example of that phrase than the Trump administration. It was, and still is, possible for the man to sit in his castle in Mar-a-Lago and say he won the 2020 presidential race when he lost it by 7 million votes, a loss that was verified in 61 courts of law, and to have 30 million-odd people believe him.

"In our time, political speech and writing are largely the defense of the indefensible," Orwell wrote:

Things like the continuance of British rule in India, the Russian purges and deportations, the dropping of the atom bombs on Japan, can indeed be defended, but only by arguments which are too brutal for most people to face, and which do not square with the professed aims of political parties. Thus political language has to consist largely of euphemism, question-begging and sheer cloudy vagueness. Defenseless villages are bombarded from the air, the inhabitants driven out into the countryside, the cattle machine-gunned, the huts set on fire with incendiary bullets: this is called pacification. Millions of peasants are robbed of their farms and sent trudging along the roads with no more than they can carry: this is called transfer of population or rectification of frontiers. People are imprisoned for years without trial, or shot in the back of the neck or sent to die of scurvy in Arctic lumber camps: this is called elimination of unreliable elements. Such phraseology is needed if one wants to name things without calling up mental pictures of them.

It was that kind of euphemism that Washington Post correspondent Craig Whitlock wrote about in "The Afghanistan Papers: A Secret History of the War," derived from secret Pentagon documents and published in August, which documents the 20 years of "euphemisms" successive U.S. governments used to gull their citizenry. It was that kind of euphemism that was used in Iraq by three presidents. The "renditions" have stopped, but there is still "collateral damage" and troops are still "drawn down" instead of retreating, as when they recently fled Afghanistan. The missile strike that killed a family of 10 in Kabul, including seven children, "was taken in the earnest belief that it would prevent an imminent threat to our forces and the evacuees at the airport, but it was a mistake."

"I have not here been considering the literary use of language, but merely language as an instrument for expressing and not for concealing or preventing thought," Orwell wrote. "Since you don't know what Fascism is, how can you struggle against Fascism? One need not swallow such absurdities as this, but one ought to recognize that the present political chaos is connected with the decay of language, and that one can probably bring about some improvement by starting at the verbal end."

The latest linguistics expert, of course, is Jared Schmeck, an Oregon father who in a Christmas call for his children with the president of the United States, ended the conversation with "Merry Christmas" and the words "Let's go Brandon," which has become a right-wing euphemism for "Fuck Joe Biden." Schmeck is now offended because he received threatening messages from people who were displeased. His free speech rights, he said, allowed him to tell the president of the United States to fuck himself.  That he used one of the most offensive insults in the English language to exchange Christmas greetings with the nation's highest elected official didn't even strike him as incongruous.

Read more on the decay of language and its political effects:

John Berthelsen is editor of the Asia Sentinel, which covers economics, politics, business and social issues in 23 countries across Asia.