Fascism in America: It's nowhere near as new as you might think

As America draws near the tipping point into fascism, it's important to remember that it's happened before 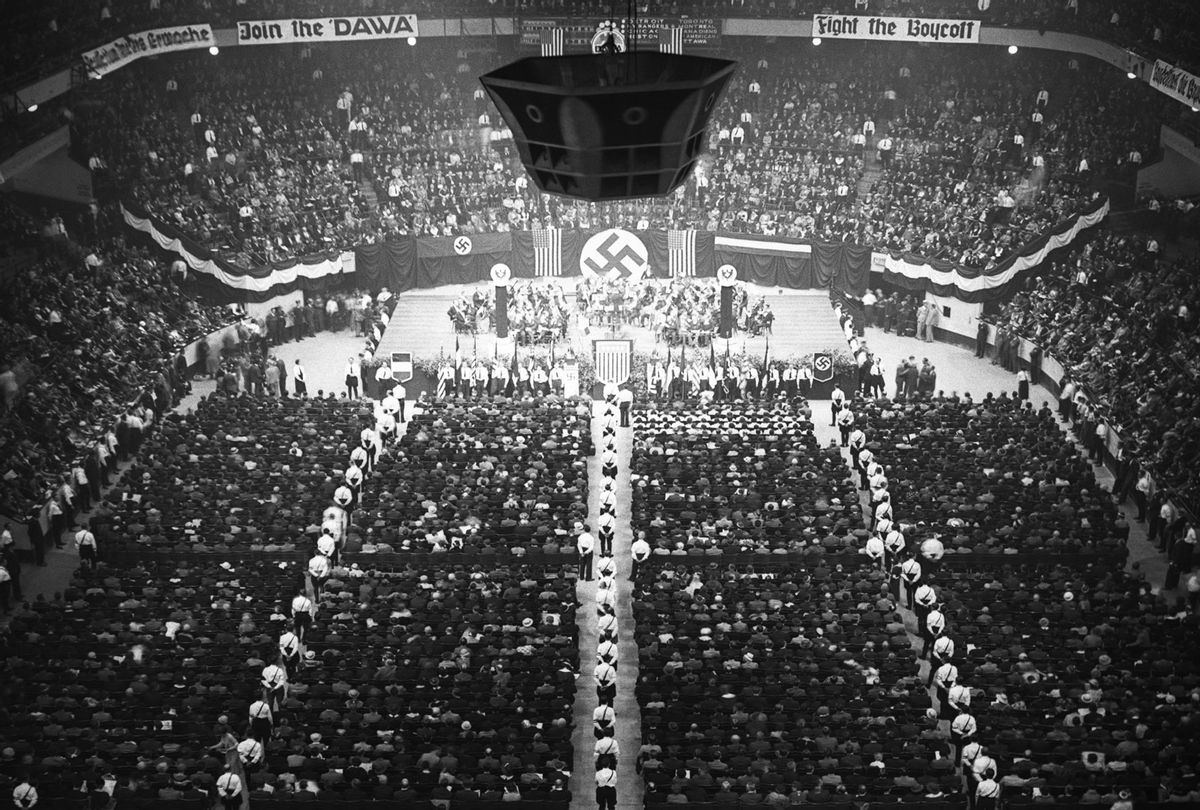 View of a mass meeting of 20,000 members of the League of the Friends of the New Germany, which was held in New York's Madison Square Garden. (Bettmann/Getty Images)
--

When my siblings and I were growing up and we did something untoward that got us into trouble my mother would say, "Let that be a lesson to you!" I've remembered that line whenever someone thinks I'm overreacting when I say the Trump administration has opened the way to a functioning autocracy, rapidly morphing into full-blown fascism.

I think about the truism that "history is prologue." We should be taking that truth more seriously.

A chilling December article in the Guardian by Jason Stanley revealed why. "America is now in fascism's legal phase," Stanley posits.

His article begins with a 1995 quote from the Nobel-winning novelist Toni Morrison. "Let us be reminded," she said, "that before there is a Final Solution, there must be a first solution, a second one, even a third. The move toward a Final Solution is not a jump. It takes one step, then another, then another."

Morrison recognized the connection between racism, anti-Semitism and fascist movements propagated by and aligned with oligarchs, as Stanley does. His compelling article lays out the various ways in which Donald Trump led us to the tipping point "where rhetoric becomes policy."

RELATED: If America really surrenders to fascism, then what? Painful questions lie ahead

Among the issues Stanley discusses are the takeover of our courts by Trump appointees, right-wing attempts at voter suppression, increasing corporate influence, the crackdown on reproductive rights and enforced gender roles, Jim Crow laws and controlled school curricula, increased political and police violence, mass incarceration, particularly directed at Black people, vigilante and militia groups, and punitive actions towards journalists and those seen as "disloyal." It's a gobsmacking portrait of where we are now: a country on the brink.

This isn't the first time America has had to confront insurrection and political violence, but it is a time to consider history, and to remember that this isn't America's first fascist threat.

The lessons of history include a close look at all dictatorships. In this moment, it is urgent that we consider Adolf Hitler's rise to power. As Stanley and others make clear, Hitler and his minions were adept at using propaganda and lies to create a narrative that led to his winning an election — without anything close to an electoral majority! — and his subsequent hideous policies. Citing the Big Lie that the last election was stolen, Stanley notes that "we have begun to restructure institutions, notable electoral infrastructure and law" and that "the media's normalization of these processes encourages silence at all costs."

German fascism didn't arise overnight. Germany's National Socialist Party began small, but from the beginning was extremely right-wing and anti-democratic. Masked in nationalist rhetoric, its agenda resonated with people who felt worried and humiliated. They welcomed scapegoats. Stanley put it this way: "The central message of Nazi politics was to demonize a set of constructed enemies, an unholy alliance of communists and Jews." Nazi leaders "recognized that the language of family, faith, morality, and homeland could be used to justify especially brutal violence against an enemy represented as being opposed to all these things."

Sound familiar? We've already heard talk of book burning, people spying on each other, and Jewish people (and members of other marginalized groups) altering their behavior as precautionary measures. We've witnessed racist violence, attacks on peaceful protesters and acts of white supremacy grounded in the claim that we are a "Christian nation." Congress has its share of pro-autocracy politicians, and our local and state governments have all been infiltrated. Vigilante groups prowl the streets, often armed with both guns and hate.

What more do we need to wake up?

This is not the first fascist threat to American democracy. The pro-Nazi movement of the 1930s and early 1940s was perhaps the most frightening to date. It culminated in an infamous 1939 rally at Madison Square Garden, when 22,000 members of the German American Bund delivered Nazi-style salutes before large banners — which depicted George Washington surrounded by swastikas.

The Bund's pro-Nazi movement included summer camps for children, billed as family-friendly venues, where Nazi indoctrination took place. At one of them in upstate New York, an annual German Day festival attracted 40,000 people. An entire generation of such brown-shirted camp kids became SS thugs, the elite troops of Hitler's army and enforcers of the Holocaust.

The American Nazi movement, with which Charles Lindbergh sympathized, only ended after Hitler's invasion of Poland later in 1939. By the time the U.S. entered the war in 1941, the Bund had been outlawed. All of this is captured in Philip Roth's semi-autobiographical novel "The Plot Against America," more recently an HBO series.

Nevertheless, America has continued to witness Nazi-inspired acts. In 1978, a proposed Nazi rally in Skokie, Illinois — then a predominantly Jewish community, with thousands of Holocaust survivors — repeated the language of the Third Reich. Donald Trump coopted Lindbergh's slogan "America First" to describe his nationalist, anti-immigration sentiments. Now white supremacist rhetoric is being spewed, as it was on the streets of Charlottesville in 2017. A year ago, a massive crowd of insurrectionists stormed the U.S. Capitol, some wearing T-shirts or flaunting banners with overtly Nazi or white supremacist memes and slogans.

In her speech at Howard University, Toni Morrison asserted that fascism relies upon media to convey an illusion of power to its followers. Now, at long last, the media is listening to the resonating alarm bell, and military and law enforcement officials are preparing for an all-out coup, which could happen in 2024 — or even sooner.

We hardly need to ask for whom the bell tolls. As Ernest Hemingway knew, it tolls for all of us.

Read more on the resurgence of fascism in America: