Right-wing media and the pandemic: A toxic feedback loop that nurtured fascism

American ignorance and paranoia were already there. Then Trump, Fox News and the virus exploited them to the max 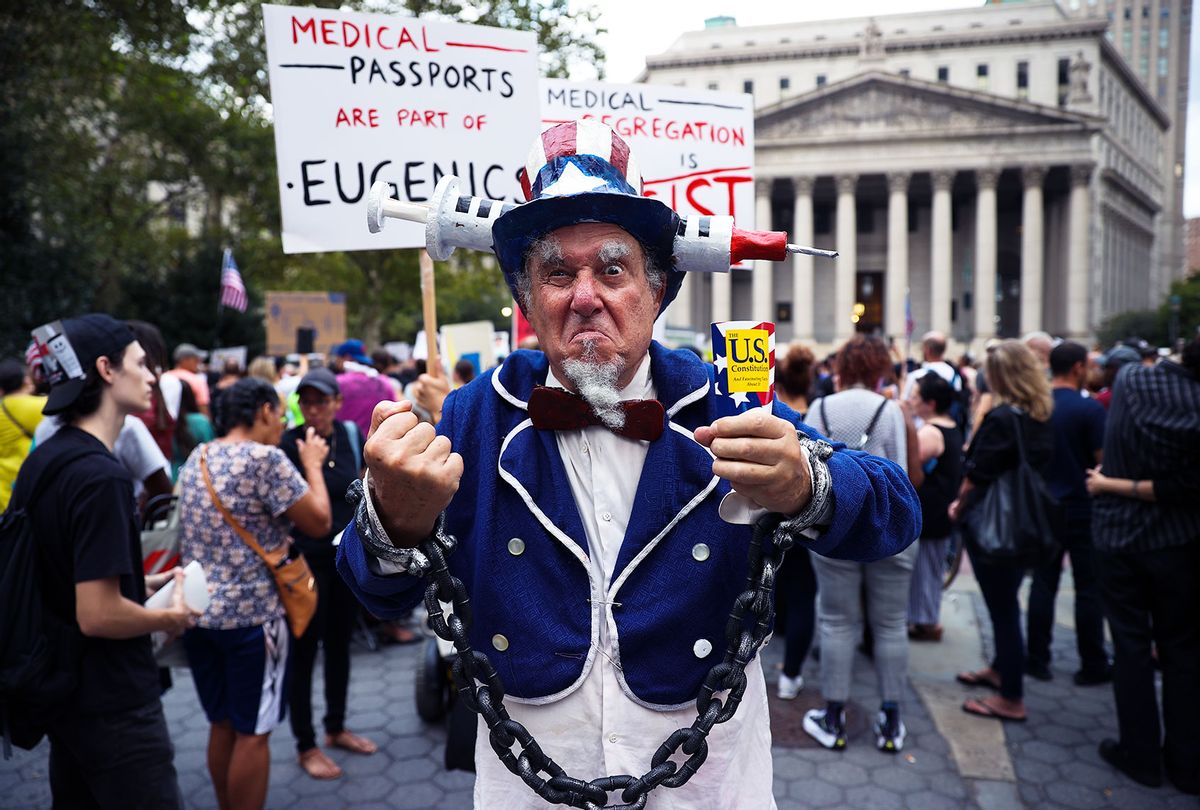 Years ago, when I was in high school, my friend's older brother purchased a copy of "The Anarchist Cookbook" from the local Army-Navy store. He told everyone he'd gotten the book from the owner in some type of illicit backroom deal. That book had totemic power: Supposedly it was illegal, and even possessing it was some type of crime. Of course that wasn't true. But for teenage boys who grew up during the 1980s, socialized into a fake military ideal of masculinity by movies like "Rambo," "Delta Force" and "Red Dawn," the facts didn't really matter.

My friend told me that his brother learned how to make napalm from "The Anarchist Cookbook." I and a small circle of friends were invited to a "secret" test after school on a Friday, near the running track of a local trade school that had been closed for renovations. Using the military language we were so obsessed with, my friend commanded me and the others to maintain "OPSEC" (for "operational security") telling us that all this was on a "need to know basis."

In the early evening, a dozen or more of us gathered to watch the detonation — OPSEC only goes so far in high school. My friend's brother had a small drum filled with a mixture of gasoline and other substances he refused to divulge. He told us to stand back and lit some type of fuse. Nothing happened. He was obviously frustrated as the crowd teetered on the verge of mockery and laughter. Regaining confidence, my friend's brother then threw a entire pack of matches into the drum.

I began to back away. I was the only Black person there and didn't want to end up being mentioned in the newspaper, burned alive or otherwise injured. What a joke I would have been among the Black folks in the community: "Damn fool got burned up hanging out with white people, doing stupid things. We thought he was smarter than that."

This time the drum full of "napalm" started to burn, producing acrid black smoke that stunk like rubber, plastic and petrol. The crowd scattered in terror, people screaming and convincing themselves that the toxic brew had exploded. The "explosion" was more smoke than fire. My friend's brother feigned pride that his test had gone so well. But his slumped shoulders revealed his true disappointment.

That next week my friend was absent from school. Rumors circulated about the his brother, the authorities and another "napalm" test. That following Monday my friend was back, looking emotionally spent and physically exhausted. He told me in a low, flat voice that his brother had made more of his toxic concoction and started a terrible fire at their house. His brother's arms were badly burned. The fire department had to come put out the fire. My friend's brother was "sent away," he vaguely suggested, to some kind of reform school or youth bootcamp.

I don't know what really happened to my friend or his family. It was nearly the end of the school year, and not long after that they abruptly moved away. No one at our school talked about him or his brother anymore.

That homemade napalm, with its mixture of foul-smelling ingredients and its noxious smoke, is something like America in this moment of democracy crisis.

RELATED: Jen Senko on how Fox News brainwashed her dad — and is now prepping its audience for fascism

America's fascist brew contains many ingredients. There is the white supremacy, gangster capitalism, consumerism, extreme wealth and income inequality, anti-intellectualism, a news media that cares more about "balance" than the truth, a societal crisis of existential meaning and value, anti-rationality, collective narcissism, a culture that rewards and fetishizes violence and cruelty, sexism and misogyny, widespread corruption, a broken commons, a bloated and dying empire, a corporate oligarchy, paralyzed and dysfunctional political and social institutions, the surveillance society, general loneliness, nihilism and despair. Nearly everyone in American society knows that something is fundamentally wrong, even if we lack the language to explain it.

America's fascist brew was already highly unstable, and then even more dangerous accelerants were added to the drum of political napalm: Donald Trump and his movement, the right-wing propaganda machine, "Christian" nationalism and other right-wing religious extremism, a Republican death cult with its attack on reality and truth, white anxiety about "demographic change" and, not least of all, the coronavirus pandemic.

New research by Dan Romer and Kathleen Hall Jamieson, featured in the December 2021 edition of the journal Social Science & Medicine, offers further insights into the combustible relationship between the right-wing propaganda and the "news" media, the spread of conspiracy theories and the coronavirus pandemic. As the site PsyPost summarizes, the research found "that conservative media in the United States is particularly appealing to people who are prone to conspiratorial thinking. The use of conservative media, in turn, is associated with increasing belief in COVID-19 conspiracies and reduced willingness to engage in behaviors to prevent the spread of the virus."

Romer, who is research director at the Annenberg Public Policy Center of the University of Pennsylvania, explained: "We have found that belief in conspiracies about the pandemic is related to lower levels of social distancing and personal hygiene behaviors recommended by the CDC, as well as mask wearing, and intentions to vaccinate. Given the importance of these behaviors to ending the pandemic, we are interested in understanding the factors that encourage these conspiracies."

Participants were asked to indicate how strongly they agreed or disagreed with the statements "The coronavirus was created by the Chinese government as a biological weapon" and "Some in the U.S. Centers for Disease Control and Prevention, also known as CDC, are exaggerating the danger posed by the coronavirus to damage the Trump presidency."

Romer and his colleagues found that the use of conservative media (including Fox News, Rush Limbaugh, and The Drudge Report) was related to increased belief in both pandemic-related conspiracy theories. Users of conservative media also exhibited greater conspiratorial thinking in general, agreeing more strongly with statements such as "Much of our lives is controlled by plots hatched in secret places."…

Some of the study's conclusions should come as no surprise. Romer told PsyPost that conservative media is "particularly engaged in entertaining and supporting conspiracies about the pandemic," and deliberately caters to "a segment of the population that is prone to accepting these conspiracies. ... We find that those followers increasingly accepted pandemic conspiracies over the course of 2020 and that the increase in those beliefs was associated with less reported mask wearing, lower intentions to vaccinate, and reduced confidence in the authority of the CDC."

This offers yet more evidence of how effective the right-wing propaganda machine has become in shaping public opinion, as well as the public mood at large and the personal identities of its most loyal audience.

What explains the right-wing propaganda machine's power? Various things: It is highly coordinated and self-contained. Its messages are repeated. It uses emotional appeals to target the fear center of the brain — there is considerable evidence that right-wing authoritarians and other conservatives are highly susceptible to such strategies.

Today's Republican Party and the larger fascist movement function as a type of political religion where faith and loyalty — and specifically belief in Donald Trump as a type of civic deity — takes the place of reason and empirical reality. In that sense, right-wing media functions as a type of a church chorus and community-building space for the faithful.

Instead of making reality more legible — the supposed responsibility of the free press in a healthy democracy — right-wing media deliberately circulates lies and disinformation that are understood by its target audience as gospel truth.

It's important to note that right-wing media would not be so nearly so effective in confusing and misleading its audience if the latter were more informed to start with about real facts, real knowledge and real expertise. In that sense, this is about a much larger cultural problem in America. Conservative media has become highly adept at using the Dunning-Kruger effect to manipulate its public into believing they are better informed, and less purely ignorant, than they actually are.

One can crudely summarize the Dunning-Kruger effect, as I did not long ago, as the self-reinforcing process where "stupid people don't know that they are stupid."

In a 2017 essay for the Pacific Standard, psychologist David Dunning explained the concept:

In many areas of life, incompetent people do not recognize  —  scratch that, cannot recognize  —  just how incompetent they are, a phenomenon that has come to be known as the Dunning-Kruger effect. Logic itself almost demands this lack of self-insight: For poor performers to recognize their ineptitude would require them to possess the very expertise they lack. To know how skilled or unskilled you are at using the rules of grammar, for instance, you must have a good working knowledge of those rules, an impossibility among the incompetent. Poor performers  —  and we are all poor performers at some things  —  fail to see the flaws in their thinking or the answers they lack. What's curious is that, in many cases, incompetence does not leave people disoriented, perplexed, or cautious. Instead, the incompetent are often blessed with an inappropriate confidence, buoyed by something that feels to them like knowledge.

Right-wing media also gains immense power — to the point where some in its audience will literally follow commands to hurt themselves and other people — because of the long-term educational crisis in the United States. More than 50% of Americans cannot read at a sixth-grade level. A public so intellectually hobbled can be easily compelled towards the simple solutions, promises and feelings of power offered by fascism, and by demagogues like our former president.

The American people feel understandably exhausted by the Age of Trump, when the many crises besieging the country have come to seem insurmountable. That outcome is at least partly by design: Right-wing elites and other anti-democratic forces — especially the gangster capitalists at the top of the economic pyramid — have spent decades destroying the commons and undermining social democracy. Widespread despair is an excellent way to weaken public resolve and grease the downward slope into dystopia.

America's failing democracy and the ascendant fascist movement are complex and interlinked problems that defy any simple solution. There is no one cure for what ails America because the problem is cultural and societal, not simply "political" in the narrow sense. Like the "napalm" fire I saw all those years ago, the United States is currently smoldering, and on the verge of exploding.

Saving American democracy will require hard work — and not just by political elites, activists and journalists, but also by ordinary people. Here is the paradox: Fatigue is understandable, but it also marks the moment when we must work hardest to push toward victory. The fascist onslaught is not over. It is only beginning.

More from Salon's extensive coverage of how right-wing media has reshaped American politics: