Amazingly, "Abbott Elementary" finds laughter in the challenge of teaching in underfunded schools

Mockumentary-style sitcoms may be common. This one stands out by making scarcity and mismanagement its stars 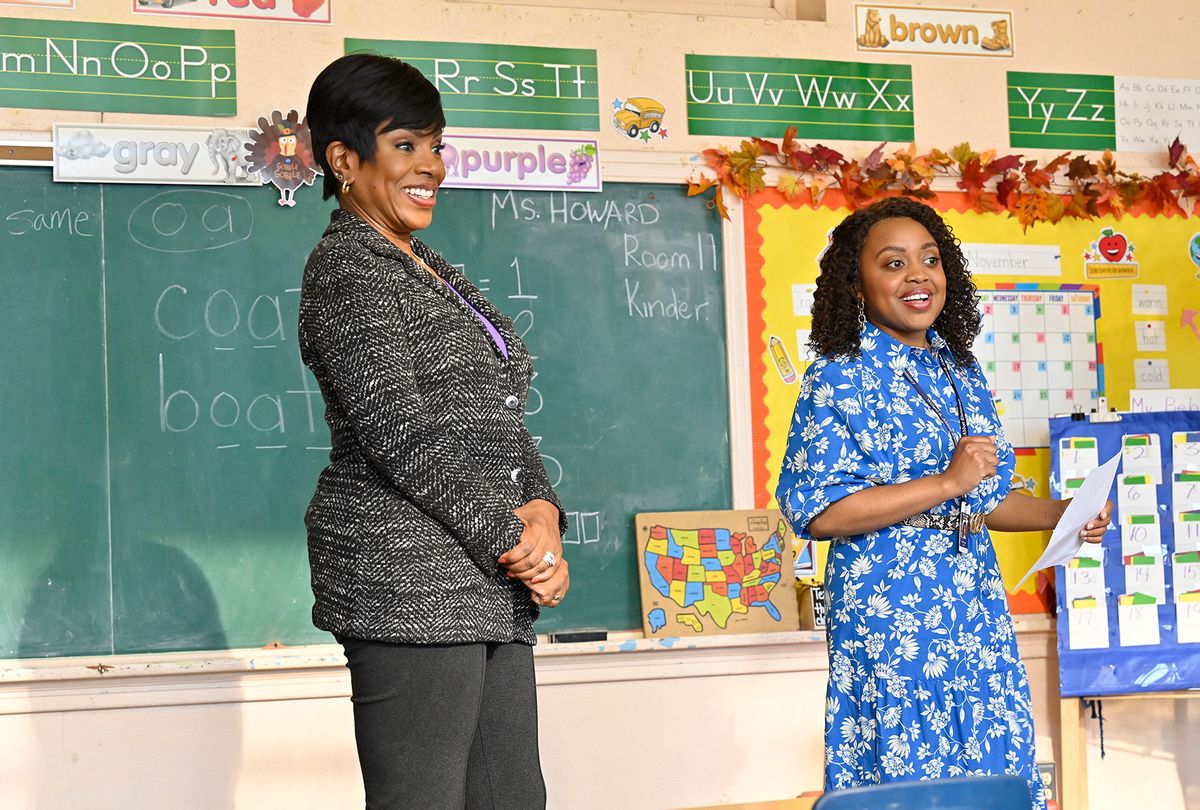 Four days after "Abbott Elementary" debuted a sneak peek episode in December, 10 South Dakota teachers made headlines by scrambling on their hands and knees to grab their share of $5,000 in cash as local hockey fans cheered them on. Footage of the stunt, which took place during a half-time break, went viral . . .  but not in the way its sponsor expected.

Randi Weingarten, president of the American Federation of Teachers, rightly called it "demeaning." "…[T]eachers shouldn't have to dash for dollars for classroom supplies," she tweeted. "No doubt people probably intended it to be fun, but from the outside it feels terrible."

That's because the players in this scene are real people – teachers who are hideously underpaid, emotionally overwhelmed and eternally underappreciated, not actors in a dark sitcom. A writer might have figured out a way to make this scenario more ridiculous than hideous; nevertheless, I cannot fathom any from "Abbott Elementary" subjecting its teachers to such an indignity.

The best comedies discover their magic somewhere along that fine line dividing stark reality and absurd honesty, often taking a few episodes to get there. But from its very first episode, Philadelphia native Quinta Brunson's show takes a magnifying glass to a scenario that objectively is not funny – that is, the deplorable underfunding of public schools in lower income communities – and finds a vein of inspired humor within that adversity.

The list of TV shows set in schools could wrap around the walls of a classroom, but "Abbott Elementary" stands out by making systemic scarcity and deprivation an invisible main character. By itself, this is a tragic situation. But the teachers at Abbott, tasked with doing the most with nothing and keeping their places afloat by any means necessary, find levity in the wreckage because they have no other choice. They're the ones tasked with educating the next generation with tools that are decades out of date.

Although her school is falling to pieces around her – making it the perfect subject for the invisible documentary crew covering underfunded, poorly managed public schools in America – Janine brims with a can-do outlook she tries to model for her second-grade class.

When a hallway light bulb goes out, and there's nobody around to fix it, she takes it upon herself to at least try.

When a simple request to replace a ruined rug is laughed off before she can even put in the paperwork, she and her fellow second grade teacher Melissa Schemmenti (Lisa Ann Walter) figure out how to source one themselves.

When her students need school supplies, Janine must rely on the kindness of strangers won over by her entertaining social media posts. (Melissa, a South Philly girl through and through, sources her classroom by tapping into her expansive web of criminal underworld connections.). She can't even count on money for new textbooks and must resort to taping in photos of recent American presidents to her social studies tome, which dates to the George W. Bush era.

Despite her efforts, Janine struggles to get her children to listen to her, as does fellow second-year teacher Jacob Hill (Chris Perfetti), the progressive white guy who obviously grew up elsewhere and can barely relate to his predominantly Black students. At least Jacob strives to have more of an emotional connection with his kids than incoming substitute teacher Gregory Eddie (Tyler James Williams), who views his time at Abbott less as a calling than a stepping-stone on a path to achieving greater ambitions.

Occasionally their personal frustrations become part of the A-plot, alongside the burgeoning crush Gregory has on Janine, affection that fails to register since she lives with a boyfriend dressed head to toe in red flags.

Abbott is a fictional representation of every inner-city public school that receives less funding (to the tune of get $23 billion, according to a 2019 report from the nonprofit EdBuild) than its counterparts in wealthier, predominantly white communities.

Of course, this being a broadcast TV series marketed to the widest audience possible, race never explicitly enters the script's dialogue. But it's impossible to ignore that the student body at Abbott is almost entirely made up of Black and brown children who the teachers bend over backward to understand, including the ones making their lives hell.

Most of the core ensemble is Black too, with everyone deferring to the wisdom and experience offered by veteran kindergarten teacher Barbara Howard (Sheryl Lee Ralph). Barbara constantly reminds her colleagues and the audience of the extent to which America's public school educators are undervalued, unusually devoted and certainly not in their profession for the money.

At a school where the average teacher lasts for two years, and where Janine and Jacob are the only rookies remaining from the group of 20 hired at the same time, Barbara is the teacher who has at this for long enough to be instructing the children of some of her former pupils.

She's also familiar enough with school district's bureaucracy to know what level of support to expect from the local government – which is to say, little to none.

"Abbott Elementary" may not break new ground in terms of format; its breezy mockumentary style is reminiscent of "Modern Family," ABC's most successful recent comedy, with a workplace comedy hierarchy modified from "The Office" blueprint.

But this show uses its motif and the platform to distinctly make a statement about the grotesquely lopsided priorities of local government bureaucracies honors teachers as witty, resourceful and stalwart servants. Each challenge they face doubles as a critique of a system that constantly fails educators, represented by a useless, self-serving school principal (Janelle James) who got her job based on connections instead of experience.

Every episode juggles these actualized anecdotes we've seen in newscasts, documentaries and read about in coverage of education disparities – and the great feat of "Abbott Elementary" is that it starts and stays funny through to the end credits. Brunson (formerly of "A Black Lady Sketch Show") and Ralph are outstanding, and Walter is the queen of deadpan delivery in every appearance.

But the child actors working in this show are gift, not only due to their acting abilities but because of the conscientious way that they're written.  Where other shows exploit the teacher-student relationship purely for the laughs and build moppets into joke machines, "Abbott Elementary" highlights the ways unequal allocations of resources impact children. Janine losing her classroom's rug also means her kids lose a safe space to gather. For one of her pupils who has a tough home life, it's a more comfortable place to sleep than his own bed.

Threading everything back to the humanity of what these teachers do keeps "Abbott Elementary" sharply antic, humane and kind. "You can't teach the kids right unless you respect where they're from," Ms. Schemmenti tells Jacob, speaking to a certain situation while also speaking aloud the tenet of the show that makes it special.

Much of our conversation about teachers and education revolves around respect, specifically the lack of it. We know that teachers don't make enough and are burned out, but tend to accept that this is just the way it is.

Worse, people treat helping underserved teachers as opportunities to create a spectacle, a fact the show lampoons in an upcoming episode where a (mostly white) gaggle of social media influencers storm the school to film the moment a teacher receives their donation of school supplies. They're not there to celebrate the teacher. They want to burnish their own do-gooder reps with a one-time prize offer.

We live in impatient days when parents attack school boards and rally to get teachers fired for striving to give their students the best education possible. The first five episodes of "Abbott Elementary" doesn't bring any of that ugliness into the mix, and it probably never has to.

Those developments relate to partisan politics, while the show focuses on the people who simply want to teach their kids how to read and write, and send them off into the world with the best base of knowledge they can provide with the tools they have available.

It also helps us comprehend why, after being made to crawl on ice to get funds for their classrooms, the teachers quoted in the Sioux Falls Argus Leader had nothing but positive quotes about the experience. Honestly, look at Janine. "I'd say the main problem in the school district is yeah, no money," she explains at one point, her smile never losing its cheerfulness. "The city says there isn't any, but they're doing a multi-million-dollar renovation to the Eagles stadium down the street from here. We just make do."

"Abbott Elementary" airs Tuesdays at 9 p.m. on ABC. Past episodes are available to stream on Hulu. Watch a trailer for the series below, via YouTube.