Are we normalizing the "death of democracy" by talking about it so much? Definitely not 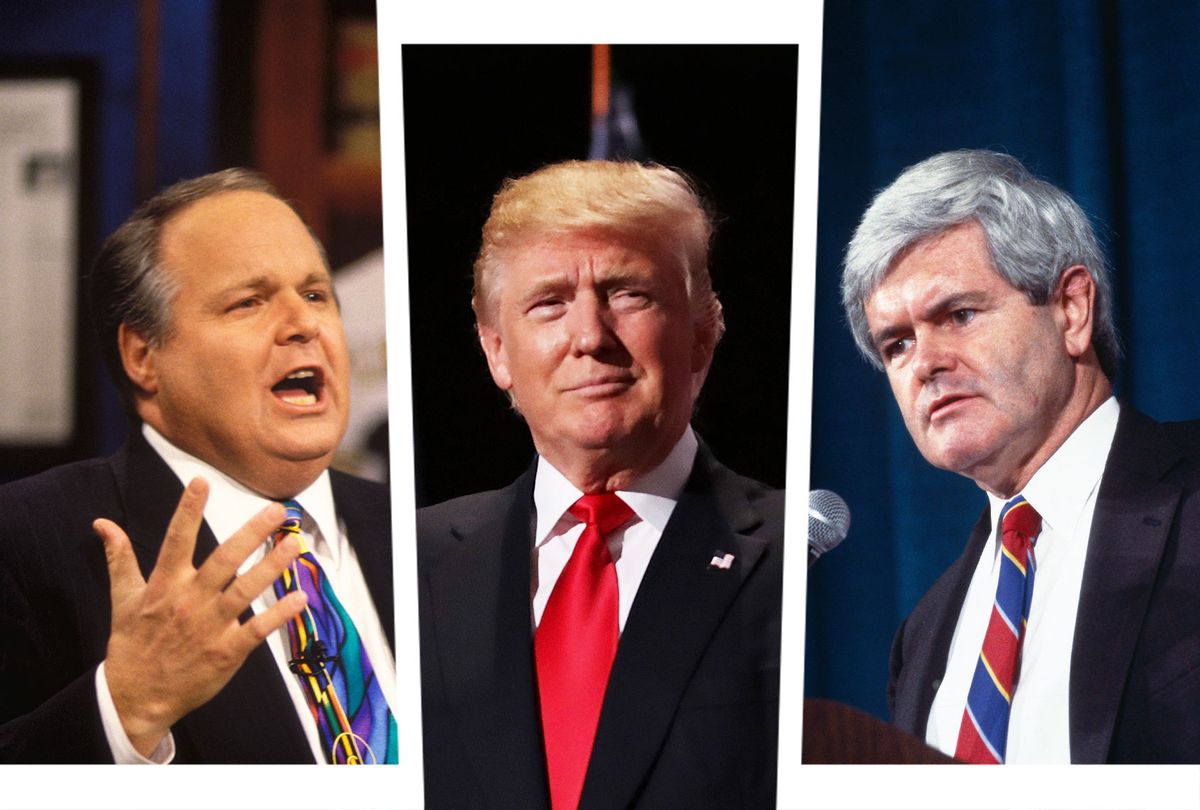 With Donald Trump's Big Lie about the 2020 election, his followers' insurrection at the Capitol and the ongoing attacks on voting rights in GOP-controlled states across the country, most people should now recognize that our democracy is in real peril. The undoing of the U.S. democracy is being carried out slowly, in stages, to wear down opponents and normalize what would otherwise be outrageous.

According to the detailed reporting of the late Village Voice journalist Wayne Barrett, this has been the modus operandi of Donald Trump from the beginning of his public career, after he was born on third base and then began whining that the public was not applauding his mighty triple — to obfuscate, obstruct, lie, manipulate, cajole, gaslight, demand loyalty, sue and repeat, ad nauseam, to wear down those trying to expose his misdeeds. He learned most of his underhanded tricks from his father, Fred, and his mentor, the lovely Roy Cohn.

We find ourselves living in a country where the traditions of political discourse were systematically destroyed, over a number of decades, by the likes of Rush Limbaugh and Newt Gingrich, who taught Republicans to always be aggressively aggrieved and to treat political opponents as enemies; where the norms of presidential behavior were turned on their head during Trump's years in the White House; where Republicans in Congress now compete with each other to see who can reach the next new low; and where a far-right media empire profits most when it spews out disinformation and trades in conspiracy theories.

And all this despicable behavior — from demonizing political opponents to praising white supremacists to passing laws that hinder voting rights and even harm public health — is being done in the name of making America "great again."

In such a hostile environment, how can a democracy best defend itself? Benjamin Franklin famously remarked, when questioned by Elizabeth Willing Powel of Philadelphia about the form of government that had been devised, that we had "a republic, if you can keep it." (We can speculate as to whether Powel, a well-connected and politically astute upper-class woman, wondered at that remark, given that she didn't have the right to vote.)

Matters are, of course, more complicated now. We live in an extremely large republic with a diverse population, and our government has long faced serious issues with representation. Because every state, despite its population, gets two senators, North Dakota, South Dakota and Wyoming (with a collective total population of about 2 million) have triple the clout of New York (20 million) or California (39 million). The 50 Democratic senators now represent 41.5 million more people than the 50 Republican senators. If population trends continue, by 2040 it is estimated that 70% of Americans will be represented by only 30 senators, while the other 30% will be represented by 70 senators.

Even in the House of Representatives, where population is supposed to count for fair representation, congressional districts are heavily gerrymandered to ensure one party has more representatives in the House and at the state level than they otherwise would. In the past couple of decades, the Electoral College has allowed Republicans to win the White House twice (Gore v. Bush in 2000 and Clinton v. Trump in 2016) when they've lost the popular vote.

Still, a broken democracy might be fixed. A slide into theocracy or autocracy would mark the end of the American experiment of freedom of speech — especially press freedom — separation of church and state and the rule of law. Grifters and oligarchs would have free play.

RELATED: Can American democracy escape the doom loop? So far, the signs are not promising

We should all sound warnings about it, but this creates an apparent dilemma: Does it help that more people are speaking about it, or does having this issue in the news so often simply normalize the idea, giving sustenance to those who plan to subvert it? The warnings have been crystal clear:

And of course everyone in the country saw with their own eyes the "Stop the Steal" protest that was followed by the brutal, deadly, feces-smeared assault on the Capitol. Those people had just heard their president exhort them for more than an hour with clear directives: "We want to go back, and we want to get this right, because we're going to have somebody in there that should not be in there and our country will be destroyed, and we're not going to stand for that."

Trump told them to go to the Capitol to "fight like hell, and if you don't fight like hell you won't have a country anymore." We all knew he was unwilling to call the attack off, and now the House committee investigating the events of Jan. 6 wants records of his calls to allies at the so-called war room at the Willard Hotel the day before.

The rest of us had already heard Trump pressuring Georgia Secretary of State Brad Raffensperger to "find" him the 11,780 votes he needed to prevail in that state.

Citizens of good faith naturally wonder: How much does it take to get charged with tampering with an election? Are certain crimes no longer crimes if you are white and wealthy, and you commit them brazenly?

Sometimes it seems like the kid's game of Chutes and Ladders: People who stormed the Capitol are prosecuted, pulling us closer to a seeming level of justice and a discouragement of continued acts of insurrection, but then Kyle Rittenhouse gets a standing ovation at a right-wing conference, and we find ourselves sliding down again, back to where we began. In the meantime, the true instigators — those who planned and funded and exhorted the insurrection — slip off the hook, time and again, pointing a toddler's finger back at those who charge them with anti-democratic actions, stamping their feet and saying, "No, you are the insurrectionists."

In this the bully-is-really-the-one-getting-bullied world (which apparently now has a name), the coup took place on election day and the tyrant is Joe Biden. Oh, and Democrats are pedophiles who hate their country and are trying to destroy it, and they must be stopped—which is not only psychological projection, as we are all tired of pointing out, but also quite politically useful in creating the sub-human enemy one needs to justify the use of violence.

Thanks again, Rush. Thanks, Newt.

RELATED: The conservative urge to be a victim: Why right-wing victimhood is spreading so fast

So, what can one do with this? How does one warn people about the distinct possibility of the United States becoming a Putin-like dictatorship when Trump's fans seemingly adore Putin (remember "I'd rather be a Russian than a Democrat" T-shirts during the Obama years?), talk up autocrats like Hungarian strongman Viktor Orbán and are themselves normalizing the idea of a violent insurrection on Trump's behalf?

As Salon columnist Amanda Marcotte noted in a recent piece about how Fox News hosts follow the Trumpian method of coupling shamelessness and belligerence to spew out disinformation, it is all about flooding the information zone, wearing opponents down, and further indoctrinating their cult-like following:

In a sense, it's not even really lying. Lying is an attempt to deceive. Gaslighting, however, does not try to convince anyone of anything, except their own powerlessness. Trump's incessant insistence that the election was "stolen" convinces no one. But, by grinding at it day and night, Trump has indoctrinated his followers into parroting the lie, not because they believe it, but as a means to demonstrate loyalty.

Trump's fans are now so tribal, and so deeply steeped in his demagoguery about Democrats and "elites" and experts in general being the enemy, that they even boo him if he strays from the message — in admitting that he got the vaccine and then the booster — in a belated attempt to promote public health or, more likely, try to seize personal glory from the vaccines.

With despotic leaders working together despite competing ideologies, as Anne Applebaum wrote recently in the Atlantic, and the far right apparently now collaborating to create a global think tank to push its oligarchic or autocratic ideology in Steve Bannon style, how should democracies respond?

In the first Summit for Democracy, held in early December 2021, President Biden laid out three key areas for action: strengthening democracy and defending against authoritarianism, fighting corruption and promoting respect for human rights. Fighting corruption must of course begin at home, not only by stopping the money-laundering operations of oligarchs but by getting money out of our own politics.

To get back to my original question: Are our constant warnings about the rise of autocracy and fascism only serving to normalize it, in effect to talk it into being? I think the question hardly matters. More than 70% of Republicans already believe that democracy in this country is facing a "major threat" — not because of the Big Lie about the election and the insurrection, but because they've swallowed Trump's lies about the election. Only 35% of Democrats, on the other hand, feel democracy is facing such a threat. A Harvard poll of voters aged 18 to 29 shows that a majority (52%) feel our democracy is in trouble or failing.

You're not crying wolf if the wolves are all around you — and even roaming the floor of Congress.

Will our democracy become a pretend one, backsliding into "competitive authoritarianism"? As Christopher Sabatini and Ryan C. Berg wrote in Foreign Policy last February, the autocrats have a playbook; those who want to keep their democracies — as imperfect as they may currently be — need a playbook too. We need to learn from other countries where democracy has been challenged, and we need to let the wannabe dictators know that we see their slow-motion coup game and are ready to fight it — by exposing it to the light of day, by strengthening the rule of law and by insisting on the right to vote and then exercising it.

Are we talking about this too much? No; that's not possible.

From the left, we often hear that we really don't have a true democracy. That is undoubtedly true: It is a republic, and one that is dangerously unfair in terms of representation, for reasons noted above. How can the rights of citizens be protected by a Congress that continues to operate through bribery? Still, the underlying message of such analyses may be that such a "democracy" is not worth saving. Such arguments end up being uncomfortably akin to the "whataboutisms" perfected by dictators like Putin.

As much as we may critique the democratic system in the United States for not living up to its name, or the Democratic Party for not getting enough done, what we now face is dire. Trump himself may not precisely fit the "classic" definition of a fascist leader — we can quibble about that around the edges — but he's close enough for many experts. More to the point, he is a nonstop liar, a conman and a sociopath. He doesn't care about his own followers, only about himself. No such person should be in a leadership position at any level.

Democrats are at least trying to save our democracy by proving it can works for the average person. Trumpists? To paraphrase the presidential candidate who went on to become the first twice-impeached president, in one White House term: They're bringing ultra-nationalism, they're bringing white supremacy, they're spreading COVID, but we assume some of them are good people. Those "good people," if they still exist, need to step back from the brink and help us save our democracy.