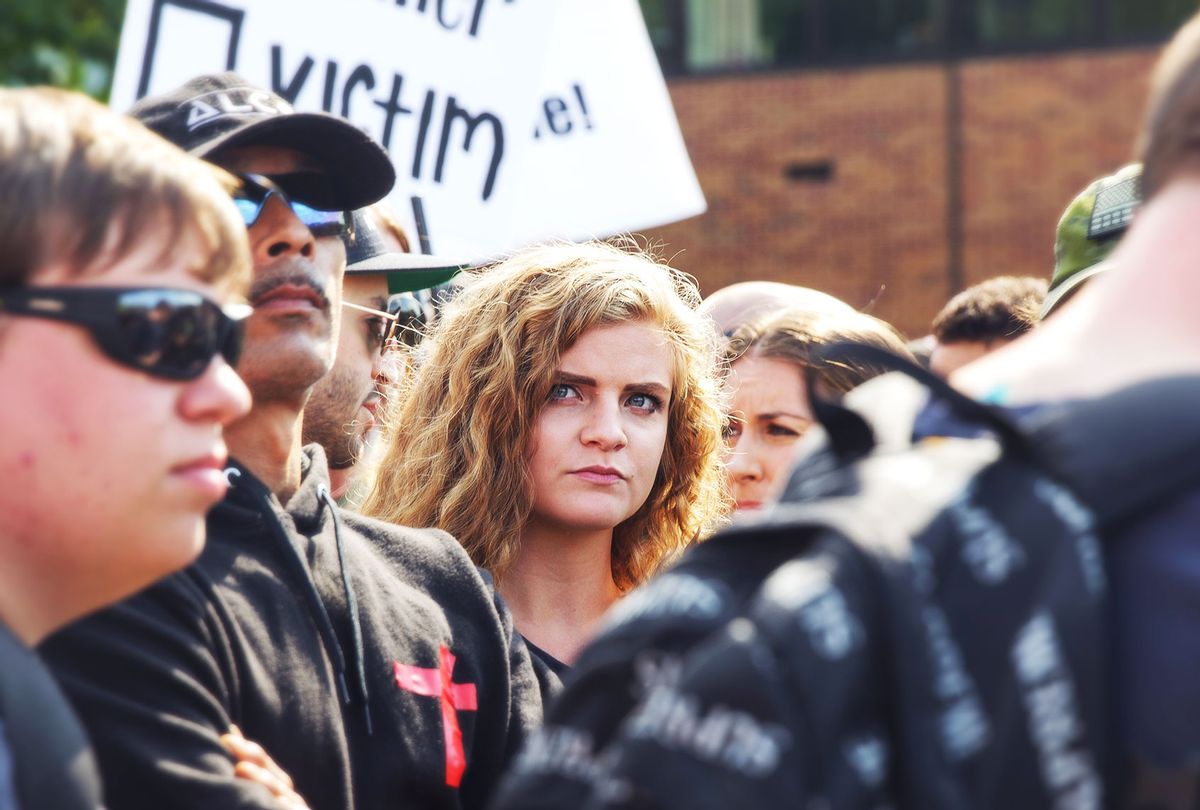 Kaitlin Bennett's Open Carry Rally was halted and ultimately diverted after left wing protesters blocked their path.Kaitlin Bennett, a former student of Kent State University, lead an open carry protest on her former campus. The Three Precenters came in as bodyguards for Bennett and her group Liberty Hangout. On September 29, 2018 in Kent, Ohio, USA. (Shay Horse/NurPhoto via Getty Images)
--

In early December, Kaitlin Bennett, the 20-something far-right provocateur known as "Kent State Gun Girl," who has made a career out of recording herself antagonizing liberal college students, issued a new set of self-mythologizing images. In a wordless four-minute video that begins with the sound of a fetal heartbeat, a series of slow-motion shots juxtapose Catholic iconography with a pregnant Bennett caressing her belly in front of altars, sitting in pews, holding rosary beads, and smiling gently at the camera. The final shot pans slowly up Bennett's body — from feet to form-fitting dress to waist-length blond hair — before ascending into an identical pan over a statue of the Virgin Mary.

The pregnancy announcement video was posted on Liberty Hangouts, a right-wing website and YouTube channel founded by Bennett's husband, which bills itself as "the official home of Kaitlin Bennett." But this was just part two of another big reveal several days earlier, when Bennett announced she was no longer an atheist, but had converted to Roman Catholicism, thanks to various factors: her husband's devout belief, her cat getting sick, and a liberal protester she tangled with who expressed hostility toward religion.

Days later, a pop-religion website owned by Catholic media giant EWTN, the largest religious media network worldwide, covered the news like a breathless tabloid "baby bump" watch. Bennett began appearing on right-wing Catholic shows, like that of LifeSiteNews, to discuss her conversion and her conviction that LGBTQ Pride Month was a manifestation of the worst of the seven deadly sins. She tweeted a picture of herself in a white lace mantilla after attending her first Traditional Latin Mass, and her husband, Justin Moldow, told Catholic-right YouTuber Timothy Gordon that filming his wife being jeered off college campuses had "truly felt like I was witnessing the Passion of the Christ in that moment."

In an era of deeply silly fame-seeking internet personas, Bennett's performance as a stuntwoman of the far right manages to stand out. As president of Kent State's Turning Point USA chapter in 2017, she oversaw a "diaper protest" mocking the notion of campus "safe spaces" that managed to embarrass the national TPUSA, ultimately ending her relationship with the group. The next year, she became internet-famous for posting a graduation picture of herself wearing a short dress, heels and an AR-10. She briefly worked with Alex Jones's conspiracy theory outfit Infowars, shot up a paper sign reading "Happy Holidays," and marketed an endless array of "gun girl" merch. (As Ruth Graham noted in a Slate profile after Bennett was run off Ohio University's Athens campus, Bennett's own social media accounts declare her intent to "monetize the haters.")

But beneath the lib-trolling spectacle, there's a deeper pattern at work. For one thing, Liberty Hangout, run by Bennett and Moldow, has a long history of hard-right politics, advancing conspiracy theories like "White genocide," making reference to the white supremacist "14 words," and polling its readership on whether the Holocaust really happened quite the way they were taught in school. ("It doesn't seem possible six million were killed," the group's Twitter account argued.) On its podcast throughout the early years of the Trump presidency, the group hosted a string of "alt-right" celebrities, including some of the people found liable this past November for inciting violence at the 2017 Unite the Right protest in Charlottesville, Virginia. But over the last couple of months the account has transformed into such a uniform stream of Catholic imagery that followers complained they'd gone "from being all about America and liberty to being all about the Vatican and Mexicans" (the latter apparently in response to a post featuring a Mexican saint).

In this, Liberty Hangout and its combative star were retracing a path taken by a number of other far-right activists associated with remnants of the alt-right and the movements jockeying to take its place. After Canadian white supremacist personality Faith Goldy was fired from her position at the right-wing outlet Rebel News for appearing on a podcast of the neo-Nazi Daily Stormer, she made a very visible return to Catholicism, and has found a warm welcome in some corners of the Catholic right. A year ago, Stop the Steal founder Ali Alexander made a splashy announcement of his own conversion to the Catholic Church only days before he helped direct a mob of protesters to the U.S. Capitol. Several months later, in mid-March, disgraced former Breitbart writer and alt-right star Milo Yiannopoulos told LifeSiteNews that returning to the Catholic Church had helped him become "ex-gay."

They were joining a number of other far-right figures who have conspicuously intertwined their political advocacy with right-wing Catholicism, including Jack Posobiec, the Pizzagate promoter turned right-wing commentator, and Nicholas Fuentes, the youthful founder of the America First or "groyper" movement, who has built a massive online following. When the various factions of the alt-right decided to gather in Charlottesville in the summer of 2017, they did most of their pre-rally organizing in chat rooms online. One of the most popular, named the "Nick Fuentes Server," was dedicated to Catholics seeking "to explore the connections between their church" and Unite the Right. Hundreds of posters in that room talked about traditionalist Catholicism and posted memes with Crusades-era imagery and rhetoric alongside overtly antisemitic and pro-Nazi posts.

"Once the alt-right disintegrated in 2018 and 2019, a number of them turned inward, toward religion, now that they've been de-platformed and their first attempts to change society have been rebuffed," said Ben Lorber, a research analyst at Political Research Associates who has studied Fuentes' movement. "It seems like a way to get a foot back into the mainstream for people like [Yiannapoulos] who were excluded during the years of the alt-right."

For moderate or liberal Catholics concerned about the extreme political divides within their church, these were worrying developments — part of the increasing entanglement of American Catholicism with ever-more right-wing U.S. politics, which over the last five years has included large swaths of the far right using Catholic imagery or appending phrases like  "Deus Vult" and "Viva Cristo Rey"  to their tweets.

To Tablet Vatican correspondent Christopher Lamb, author of a papal biography, "The Outsider: Pope Francis and His Battle to Reform the Church," which details the growing political polarization within the world's largest religious denomination, this was evidence of the far right's efforts to infuse their movement with spiritual purpose. When you already trade in the politics of identity, Lamb asked, "How do you deepen that tribalism? You do it through religious imagery. In a sense, you empty the content of the religious and use the externals — the rosary beads, the crucifix, some words, perhaps some prayers — but you use it as an identity marker to give your movement a sense that it has a soul or deeper intensity at a moral level."

David Lafferty, a writer at Where Peter Is, a moderate Catholic website that tracks the influence of the Catholic right within the church. offered a similar analysis. "I think there's a broader pattern here, where a lot of people who are part of the larger populist right, or MAGA movement, or what used to be called the alt-right, are willing to use any opportunity to find a new audience," he said. "When you tap into the ecosystem of online Catholicism, you've got a built-in audience with big traditionalist or ultra-conservative Catholic sites, all of which have very devoted followers and fan bases. If you're coming from the populist right into the church, you're going to be able to walk right into that world and become a sort of instant celebrity."

That influence trading works in both directions. This past week, as LifeSiteNews hosted Bennett to detail her conversion story, Bennett's former employers at Infowars hosted LifeSite's cofounder for a long interview about vaccine disinformation, Catholicism's "civil war," and what Jones described as an "Antichrist system" composed of "mass surveillance, transhumanism [and] the Great Reset agenda."

"It shows that this movement has no limits. There is no cutoff point," said Lamb. "The way they're operating is that anyone who agrees with their ideology is an ally, regardless of anything else. You can deny that children were murdered at the Sandy Hook massacre, as long as you agree with me on COVID. If you agree with me, anything goes."

"I pray that maybe there's something genuine in there, and she'll drop off the radar and become a humble person trying to be a good Catholic," Lafferty said of Bennett's conversion, and others by prominent far-right figures. "Somehow, I doubt that. I think there are larger forces here, ready to use anything that's available to spread the right-wing populist message, gain more followers, cause more controversy."

Read more on the religious right's rising power in the Trump era: