After the Storm: A year after Jan. 6, Trump supporters still lost in blizzard of conspiracies 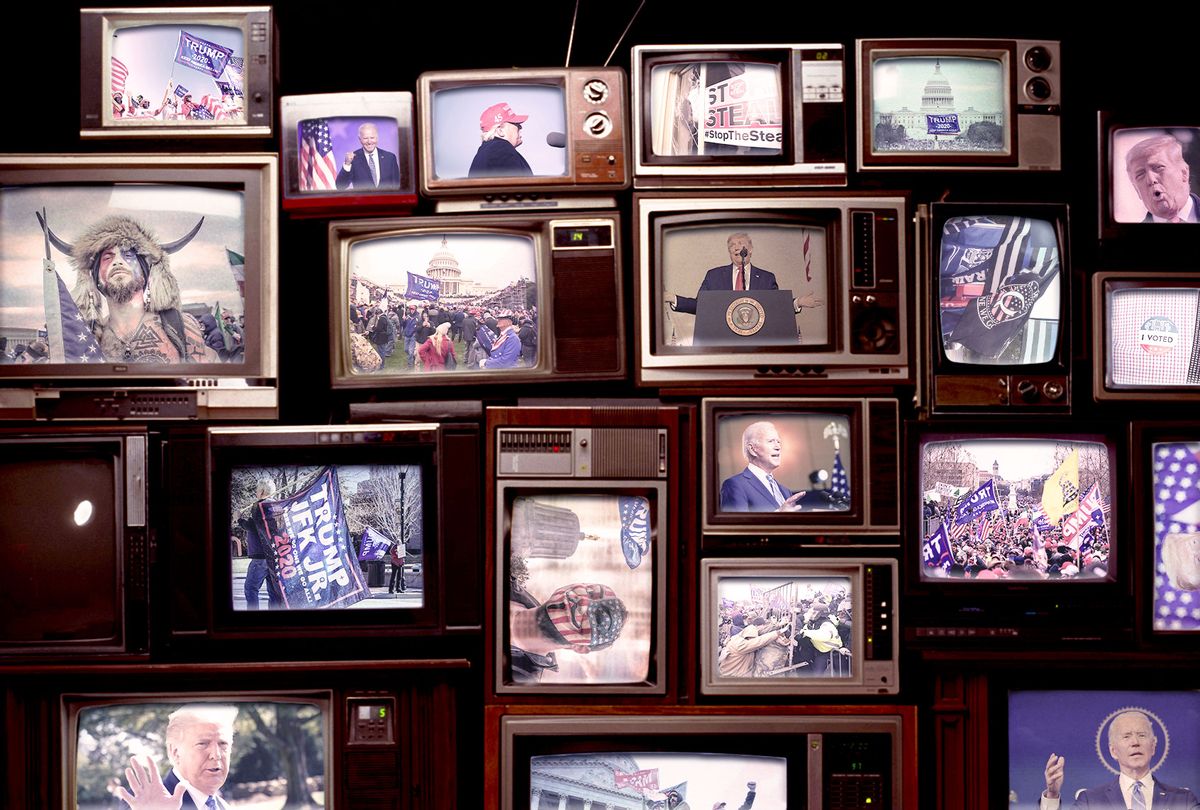 WASHINGTON, D.C.—On January 6, 2022, the first anniversary of the storming of the Capitol, the one thing Trump loyalists could agree on was everyone else was to blame for the carnage that day but them.

Jim Griffin, who was outside the Capitol last January, claimed FBI infiltrators were all "over the entire event and they were telling people to go inside the Capitol."

Griffin, who handed out business cards calling himself "The True Captain America" with photos in costume parading a 20-foot-tall American flag on the Capitol grounds, knew who the infiltrators were.

"QAnon is FBI. … FBI infiltrators is QAnon. They're the ones who organized the event," referring to the failed coup. Griffin said it was QAnon who broke into "Nancy Pelosi's and all their offices and all that crap." At the same time, the infiltrators "was only two of them [among] at least 4 million people" at the Capitol last Jan. 6.

Griffin spoke as he held a lit candle shielded in a clear Starbucks cup during a nighttime vigil outside of D.C.'s Central Detention Facility, which holds the remaining band of hardcore insurrectionists as they await trial. His millions at the coup had dwindled to a dozen at the vigil.

Griffin said antifa and BLM were also responsible for Jan. 6. "There were four busloads of … antifa and they were in Trump outfits. And the guy who got paid $75,000 admitted it," he said.

Griffin was apparently referring to John Earle Sullivan, who sold footage of the shooting of Ashli Babbitt to news outlets for $90,000 but was stripped of the money as ill-gotten gains after the government indicted him for allegedly participating in the insurrection.

Accompanying Griffin last year and this one was "Big John." He blamed militias, not QAnon or antifa for violence on Jan. 6. "The FBI had people that were infiltrated into the Proud Boys, into the Oath Keepers, who were actually leading people up to the steps to doors that were thrown open in front of them and to barricades that were pulled away in front of them."

Big John was more modest in his estimates of the Jan. 6 crowd than Griffin, putting it at "well over a million." He said of Trump supporters who entered the Capitol, "Nobody got into that building that wasn't allowed into the building."

Wilma Ward claimed antifa stirred the pot as well. She said videos show "people pointing out antifa in the crowd and some of them were saying, 'Yeah.'" Ward was one of the few at the vigil who wasn't there in 2021. She came from San Diego "to keep Ashli's name alive and hopefully the prisoners get some justice." Babbitt was killed by a Capitol Hill officer who claimed he warned her repeatedly as she climbed through a broken window that was the last barrier between the insurrectionists and members of Congress.

When asked if there were members of antifa in the jail, Ward said, "Yes, there are. There are. At least that's what we're being told when we write the prisoners … who to trust, and who not."

These conspiracies could have come from Newsmax, "the Trumpiest channel on TV," known for hiring journalists previously fired for sexual harassment. Its daily viewership has plunged to 93,000, a drop of more than 70 percent since briefly surging post-election after feeding its audience a steady diet of the Big Lie that the election was stolen from Trump. Newsmax's bootlicking has earned it a spot in lawsuits seeking billions of dollars from individuals and outlets promoting "baseless election fraud claims."

Michael, a correspondent for Newsmax, was among the journalists outside the D.C. jail who outnumbered conspiracists about five to one. He asked, "Was there any evidence that showed President Trump asked people to break through windows or doors," an allegation he seemed to have invented, and answered his own question, "There hasn't been any evidence."

Following a testy exchange, with Michael asking me, "Are you larping as a conservative," he gave his take on Jan. 6. He did blame Trump supporters while trying to spin the day as MAGA gone wild, "I think it was a celebration of President Trump's candidacy of his time as president that got out of hand and mob mentality took over."

RELATED: From the Bundys to the Rotunda: How allowing far-right terrorism to fester led to the Capitol riot

His opinion might put his colleagues at Newsmax in a tizzy. Even as the insurrection was in full swing, they were already blaming antifa and BLM "infiltrators." By the night of Jan. 6 Newsmax declared the mob innocent, "Trump supporters don't do these things" — as supporters partied at hotels across the city, defied mask mandates and curfews, abused staff and guests, and declared, "We won."

Since Jan. 6, Newsmax has left no conspiracy behind. It called it a "false flag operation." It speculated that Michael Fanone, the D.C. cop pummeled and Tasered by the Trump crowd until he had a heart attack and a traumatic brain injury, was "mistaken for antifa." It has amplified Matt Gaetz histrionics that the FBI organized and participated in the insurrection.

One Jan. 6 participant seemed to have learned the error of his ways. Keith Scott said he survived Trump's "Election Fraud Cult." Before Jan. 6, "It consumed my life." A resident of Corpus Christi, Texas, Scott said, "If a Tweet came from Stop the Steal that there was a rally in Lansing, Michigan, I would drop everything and go there." He crisscrossed the country, listening to testimony about voter fraud, but he was disillusioned by Jan. 6.

Scott says, "Trump didn't go far enough." Scott didn't want the insurrection to go further, but rather, "It was just political theater. Was [Trump] just trying to get eyeballs that day on Jan. 6 for his speech or was he trying to really show everyone there was fraud and expose the fraud?"

Scott wanted Trump to appoint Sidney "Release the Kraken" Powell as special counsel. He said Trump "could have gotten rid of the head of the FBI and CIA. There are things that he could have done to really dive in and look into" election fraud.

Scott's faith was unshakeable: the election was stolen. He walked away when asked for evidence of voter fraud other than verbal claims. Scott's problem wasn't the cult. It was the cult leader. A publicity-hungry Trump had abandoned him and the true cause of election fraud.

Julie, a D.C. native, shared Scott's delusions. She watched on election night as "The machines couldn't keep up with Trump's votes. They shut down all at once in six states: Nevada, Georgia, Nevada, Michigan, others."

In the cult that may prove stronger than the leader, Micki Witthoeft has a special status. She is the mother of their martyr, Ashli Babbitt. Earlier in the day outside the Capitol, Witthoeft embraced Marjorie Taylor Greene and the falsehood that the election was stolen.

Outside the jail, she said, "Patriots are scared to show up in numbers now and who can blame them they're still being hunted down." Insurrectionists in jail "did little more than carry a flag." Ashli "had every right to be in the building."

"Where are our leaders," Witthoeft pleaded, expressing appreciation for the Representatives from Jewish space lasers, child sex trafficking, and palling around with Holocaust deniers.

But being mesmerized by conspiracies is like thinking the sun is nothing more than the gaseous eruptions bursting from it rather than understanding the fury on the surface is powered by the incendiary core.

RELATED: How Unite the Right paved the way for Jan. 6 — and helped launch some of riot's biggest players

On the anniversary of Jan. 6, there were glimpses of the white-hot core.

Scott said he favored picture I.D. laws for voting and to "get rid of all this mail-in voting."

Jim Griffin, upset at my questions, said, "You're not one of us," pointing at my Gadsden hat. That's the one with a coiled rattlesnake reading "Don't Tread On Me." I had disguised myself. When interviewing Trump cultists, friendly apparel elicits more honest responses and fewer assaults.

Micki Witthoeft said, "This country's not lost. Know that in your heart, we're not lost."

The sentiments fit together seamlessly. Beneath flights of deadly fancy is a sense of searing loss. America is being lost, but in their mind, it's a romanticized vision that never existed. Hard work isn't respected anymore. Manly virtue, cop and soldier, aren't respected. Voting, the one rare system free of fraud, is thoroughly corrupted.

And they are right that America is dying, but they can't recognize the disease or the symptoms. It's dying from oligarchs, climate chaos, gun culture, racist policing, a pandemic without end, infotainment, misery for the proles, welfare for the fat cats.

The Trump cultists have convinced themselves they are superheroes saving the nation when in fact they are wielding the knives, killing America with a thousand cuts.

Witthoeft's plea, "We're not lost," is kin to Tucker Carlson's "Great Replacement" conspiracy that whites are being replaced by diseased barbaric hordes pouring across our borders.

Griffin's rant, "The people that work hard and sacrifice," is producerism. It's the ideology of President Andrew Jackson. White Americans are the producers, the hard workers who sacrifice and create the wealth. But they are beset by parasites above and below. Trump loved Jackson so much he put a portrait of the genocidaire of Native Americans in the White House.

Trump and Tucker have convinced the insurrectionists that America is dying because of "illegal aliens" and Blacks on welfare on the ladder right below them and sneering liberals and arrogant experts on the ladder right above them. The Trump cult refuses to blame or even idolizes those at the top of a ladder so tall it is being stretched into the heavens by men racing to be the first trillionaire and the first to colonize space.

To reconcile the harsh reality that America is dying with the demented fantasy that blame falls on immigrants, Black people, public-school teachers, Muslims, public-health experts requires a con game so elaborate that even if QAnon disappeared today, new insane conspiracies would appear tomorrow to bridge the chasm between the far-right bizarro world and actual reality.

The Trump cult is no joke. The fanatics are a small portion of the country, perhaps 15-20 million voters. But they are the malevolent heart of a party that sees a winning formula in conspiracism, voter suppression, Democratic incompetence, manufactured outrage that teaching racism is the real racism (otherwise known as CRT), and a propaganda machine that would make Joseph Goebbels envious.

If the fascistic right gains power then the deranged mythology that the 2020 election was stolen and FBI and antifa were behind the insurrection becomes our reality. We will be dragged into a world where "Anyone who can make you believe absurdities can make you commit atrocities."