Trump's troops: The far-right has a tight grip on too many in uniform

What if Trump leads another insurrection? How many military and law enforcement members will stand firm? 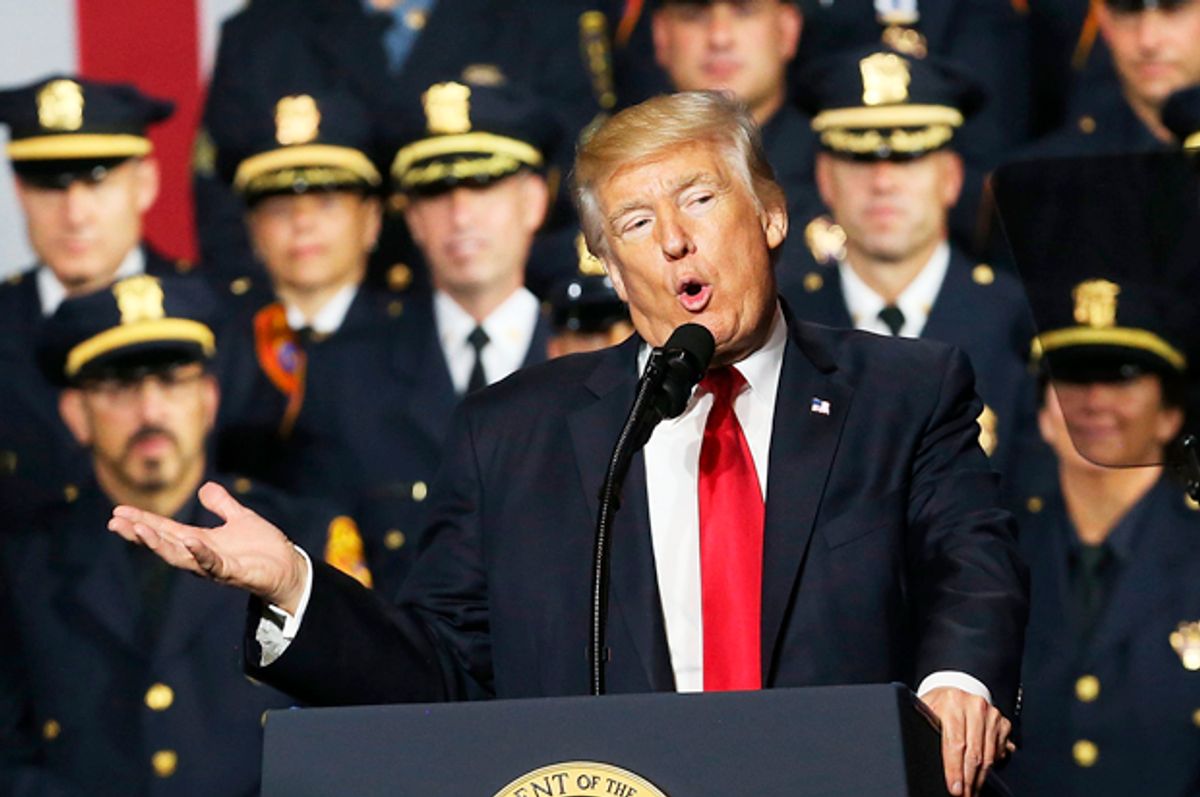 Everyone surely remembers Donald Trump's appeals to "law and order" going all the way back to his infamous full-page ad condemning the (innocent) Central Park Five titled "Bring Back the Death Penalty, Bring Back Our Police." When he ran for office he sought out law enforcement at all levels as a discrete constituency, promising to let them take the gloves off and encouraging them to not "be so nice" to suspects. During the George Floyd protests during the summer of 2020, he told federal law enforcement and military leaders he wanted them to "crack skulls" and "beat the shit out of" the protesters. At one point he said, "just shoot them." Luckily, they didn't do that. It took a devoted Trump-loving vigilante named Kyle Rittenhouse to execute that order.

Until the January 6th insurrection, Trump was the nation's most vociferous defender of police. But on that day he was strangely reserved, tepidly tweeting that the rioters should be respectful but pretty much remaining hands-off for hours as his rabid followers stormed the U.S. Capitol and assaulted hundreds of police who were trying to keep the mob from attacking members of Congress. That night he said the violent horde that did the following was very special and that he loved them.

You would have thought that this abject betrayal of Trump's supposed fealty to the men in uniform would have shaken their faith in him. But according to this new profile of former D.C Metropolitan police officer (and Trump voter) Michael Fanone by Molly Ball of TIME, most of his former colleagues on the force remain devoted to Trump. Fanone came forward to publicly speak out about what happened in order to stand up for the police who were attacked that day. It didn't occur to him that the police themselves wouldn't back him:

Maybe officers like him and Dunn, who wanted Trump held accountable, were the exception. Watching the body-cam footage again, he noticed how many cops were standing around, kibitzing with the rioters. He thought of his MPD colleagues: out of more than 3,000 on duty, about 850 had responded to the Capitol. What about all the others?

Where was his backup? Where was the police union, which rushed to the defense of any officer criticized by left-wing politicians? The Fraternal Order of Police (FOP), which endorsed Trump in 2016 and 2020, had issued a lukewarm statement on Jan. 6 urging "everyone involved to reject the use of violence and to obey the orders of law enforcement officers to ensure that these events are brought to a swift and peaceable end." Numerous active-duty FOP members have since been charged in connection with the riot. In at least one case, the union is trying to keep an accused rioter from being fired by his department...

Colleagues he's known for decades don't talk to him anymore. Guys who never called to check in when he was in the hospital send him taunting memes about his liberal-darling status.

Fanone thought he was speaking for his fellow officers. But he wasn't. And he asks himself today, "the vast majority of police officers—would they have been on the other side of those battle lines?"

That is the question, isn't it? The police on duty that day were protecting members of Congress from a violent mob that was trying to stop the transfer of power. And there is ambivalence among cops about whether that was the right thing to do? That's chilling.

And it isn't just the police. Trump's love for men in uniform wasn't confined to law enforcement. He saw the military as a constituency too and was very popular among the troops. In fact, he was so popular that a number of active duty military were among the rioters on January 6th. Many are also members of the Oath Keepers, a far-right group of former and current military and law enforcement.

Last month the Pentagon released new guidelines on how to deal with extremism in the ranks, which they now realize is a growing problem. The Washington Post reported that the University of Maryland consortium "released a report last month showing that since 1990, 458 crimes tied to extremism involved veterans or active-duty U.S. troops." In fact, the worst terrorist attack on U.S. soil before 9/11, the Oklahoma City bombing, was carried out by a military veteran who had been radicalized while on duty and later joined a far-right militia group.

The military really doesn't have any idea how widespread this problem is.

When you consider that someone like former Gen. Michael Flynn, a far-right conspiracy theorist and Trump's first national security adviser was in charge of Military Intelligence just a few years ago, it's clear this problem is not confined to the rank and file. There are probably quite a few extremists among the active duty brass as well.

So once again this raises the question, what if it happens again? Three retired generals wrote an op-ed recently asking that very question. They note the participation of active duty and retired personnel in the January 6th insurrection as well as a number of retired flag officers who have signed on in support of Trump. And they offered this hair-raising scenario as a possibility:

The potential for a total breakdown of the chain of command along partisan lines — from the top of the chain to squad level — is significant should another insurrection occur. The idea of rogue units organizing among themselves to support the "rightful" commander in chief cannot be dismissed...

All service members take an oath to protect the U.S. Constitution. But in a contested election, with loyalties split, some might follow orders from the rightful commander in chief, while others might follow the Trumpian loser. Arms might not be secured depending on who was overseeing them. Under such a scenario, it is not outlandish to say a military breakdown could lead to civil war.

The prospect of members of law enforcement agencies and the military breaking off into rogue commands seems like something out of a political thriller. And it's probably not very likely. But then the election of Donald Trump was unlikely as was the insurrection of January 6th. I would have thought it unlikely that police officers would defend a vicious mob beating other cops with flagpoles or that active duty military would boldly participate in it. We all should recognize by now that anything can happen.