Where we are now: The dire state of America in 2022 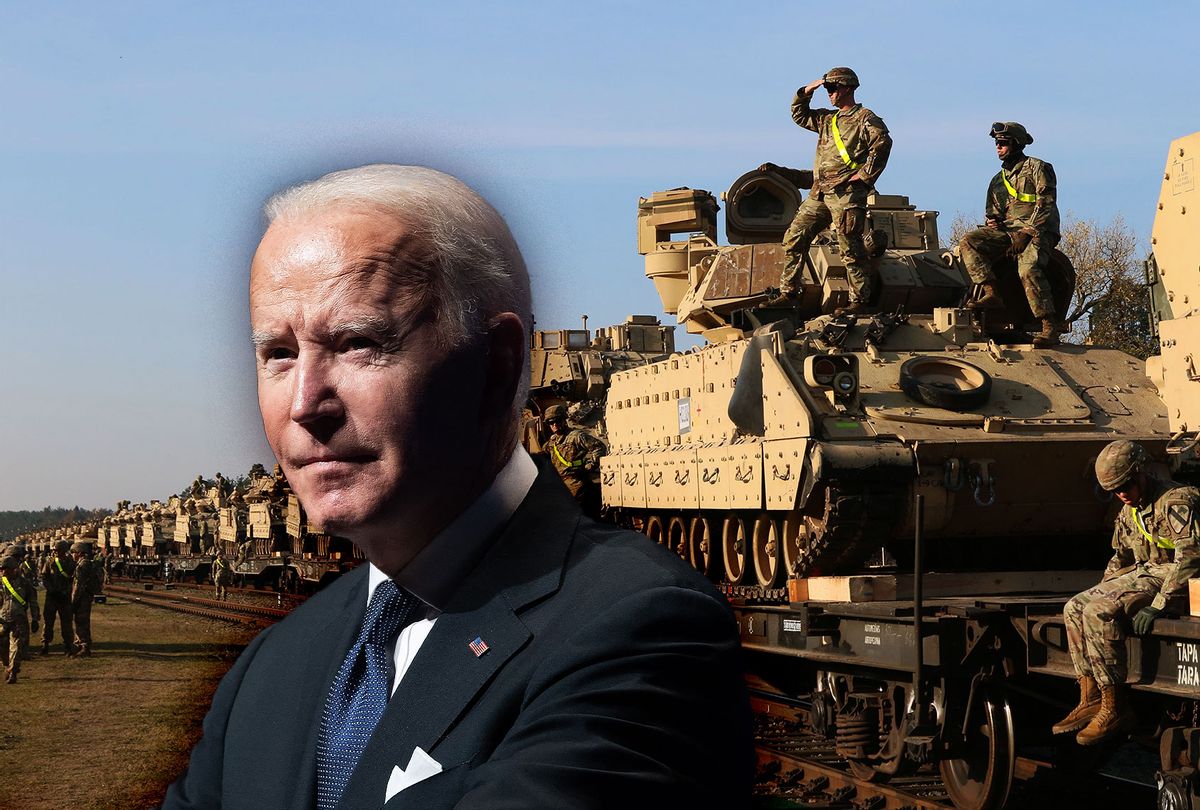 Joe Biden | Members of the US Army 1st Division 9th Regiment 1st Battalion unload heavy combat equipment including Abrams tanks and Bradley fighting vehicles at the railway station near the Pabrade military base in Lithuania, on October 21, 2019. (Photo illustration by Salon/Getty Images)
--

This article is adapted from the new edition of Norman Solomon’s book “Made Love, Got War,” being published this week as a free e-book.

The final big legislative achievement of 2021 was a bill authorizing $768 billion in military spending for the next fiscal year. President Biden signed it two days after the Christmas holiday glorifying the Prince of Peace.

Dollar figures can look abstract on a screen, but they indicate the extent of the mania. Biden had asked for "only" $12 billion more than Donald Trump's bloated military budget of the previous year — but that wasn't enough for the bipartisan hawkery in the House and Senate, which provided a boost of $37 billion instead.

Overall, military spending accounts for about half of the federal government's total discretionary spending — while programs for helping instead of killing are on short rations at many local, state and national government agencies. It's a nonstop trend of reinforcing the warfare state in sync with warped neoliberal priorities. While outsized profits keep benefiting the upper class and enriching the already obscenely rich, the cascading effects of extreme income inequality are drowning the hopes of the many.

Corporate power constrains just about everything, whether health care or education or housing or jobs or measures for responding to the climate emergency. What prevails is the political structure of the economy.

Class war in the United States has established what amounts to oligarchy. A zero-sum economic system, aka corporate capitalism, is constantly exercising its power to reward and deprive. The dominant forces of class warfare — disproportionately afflicting people of color, while also steadily harming many millions of white people — continue to undermine basic human rights, including equal justice and economic security. In the real world, financial power is political power. A system that runs on money is adept at running over people without it.

The words "I can't breathe," repeated nearly a dozen times by Eric Garner in a deadly police chokehold, resonated for countless people whose names we'll never know. The intersections of racial injustice and predatory capitalism are especially virulent zones, where many lives gradually or suddenly lose what is essential for life. Discussions of terms like "racism" and "poverty" too easily become facile, abstracted from human consequences, while unknown lives suffocate at the hands of routine injustice, systematic cruelties, the way things predictably are.

An all-out war on democracy is now underway in the United States. More than ever, the Republican Party is the electoral arm of unabashed white supremacy as well as such toxicities as xenophobia, nativism, anti-LGBTQ bigotry, patriarchy and misogyny. The party's rigid climate denial is nothing short of deranged. Its approach to the COVID pandemic has amounted to an embrace of death in the name of rancid individualism. With its Supreme Court justices in place, the "Grand Old Party" has methodically slashed voting rights and abortion rights. Overall, on domestic matters, the partisan matchup is between neoliberalism and neofascism. While the abhorrent roles of the Democratic leadership are extensive, to put it mildly, the two parties now represent hugely different constituencies and agendas at home. Not so on matters of war and peace.

Both parties continue to champion what Martin Luther King Jr. called "the madness of militarism." When King described the profligate spending for a distant war as "some demonic, destructive suction tube," he was condemning dynamics that endure with a vengeance. Today, the madness and the denial are no less entrenched. A militaristic core serves as a sacred touchstone for faith in America as the world's one and only indispensable nation. Gargantuan Pentagon budgets are taken for granted, as is the assumed prerogative to bomb other countries at will.

Every budget has continued to include massive outlays for nuclear weapons, including gigantic expenditures for so-called "modernization" of the nuclear arsenal. A fact that this book cited when it was first published — that the U.S. had 10,000 nuclear warheads and Russia had a comparable number — is no longer true; most estimates say those stockpiles are now about half as large. But the current situation is actually much more dangerous. In 2007, the Doomsday Clock maintained by the Bulletin of the Atomic Scientists pegged the world's proximity to annihilation at five minutes to apocalyptic midnight. As 2022 began, the symbolic hands were at 100 seconds to Midnight. Such is the momentum of the nuclear arms race, fueled by profit-driven military contractors. Lofty rhetoric about seeking peace is never a real brake on the nationalistic thrust of militarism.

With the withdrawal of U.S. troops from Afghanistan, the third decade of this century is shaping up to unfold new wrinkles in American hegemonic conceits. Along the way, Joe Biden has echoed a central precept of doublethink in George Orwell's most famous novel, "1984": "War is Peace." Speaking at the UN as the autumn of 2021 began, Biden proclaimed: "I stand here today, for the first time in 20 years, with the United States not at war. We've turned the page." But the turned page was bound into a volume of killing with no foreseeable end. The U.S. remained at war, bombing in the Middle East and elsewhere, with much information withheld from the public. And increases in U.S. belligerence toward both Russia and China have escalated the risks of a military confrontation that could lead to nuclear war.

A rosy view of America's future is only possible when ignoring history in real time. After four years of the poisonous Trump presidency, the Biden strain of corporate liberalism offers a mix of antidotes and ongoing toxins. The Republican Party, now neofascist, is in a strong position to gain control of the U.S. government by mid-decade. Preventing such a cataclysm seems beyond the grasp of the same Democratic Party elites who paved the way for Donald Trump to become president in the first place. Realism about the current situation — clarity about how we got here and where we are now — is necessary to mitigate impending disasters and help create a better future. Vital truths must be told. And acted upon.

More from Norman Solomon on inequality and the struggle for global justice: