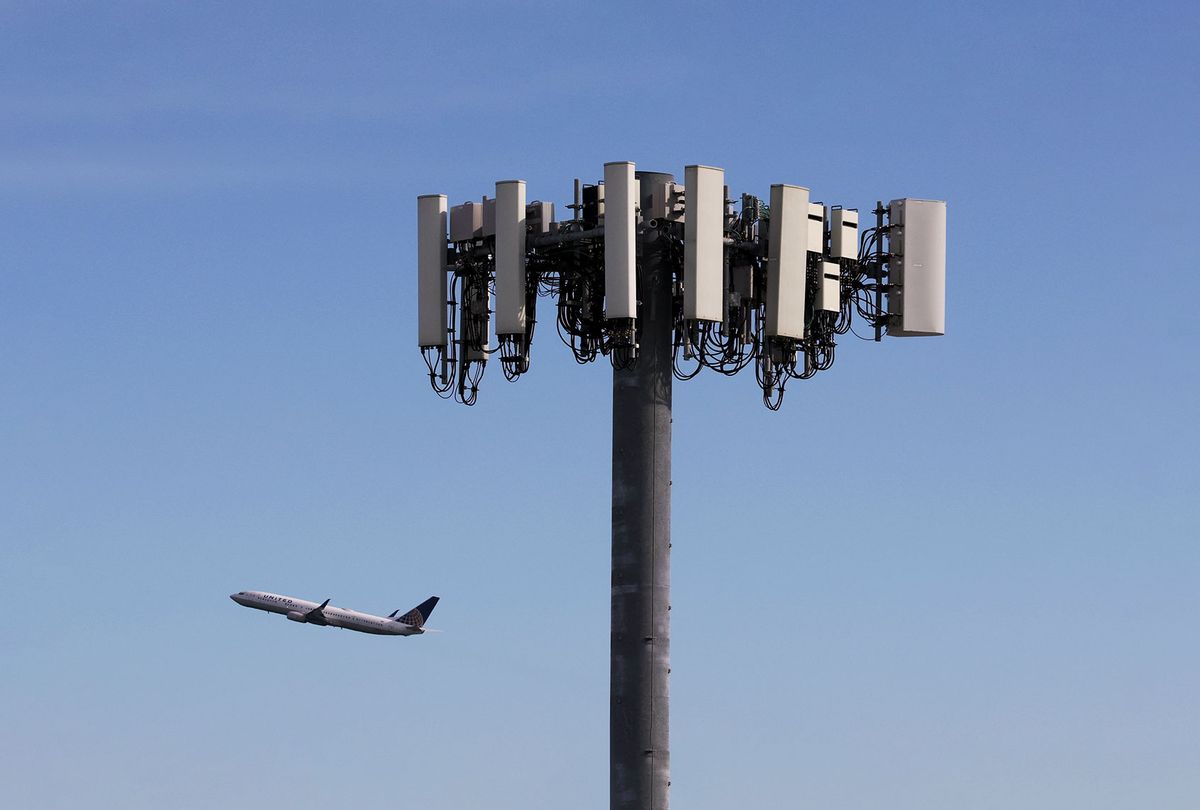 A United Airlines plane flies by a cellular tower as it takes off from San Francisco International Airport on January 18, 2022 in San Francisco, California. Verizon and AT&T announced that they will proceed with plans to activate 5G cellular service across the nation on Wednesday with the exception of near airports and runways after the Federal Aviation Administration and major airlines warned that the signal could interfere with navigational systems on some planes and cause flight disruptions. (Justin Sullivan/Getty Images)
--

Among the more physically nonsensical conspiracy theories that have emerged from the pandemic is one that connects the spread of the SARS-CoV-2 virus — a physical object comprising of millions of atoms — with fifth-generation broadband cellular technology (5G) currently being implemented in the form of towers broadcasting radio waves (massless photons).

Despite having no basis in physics, the notion that the pandemic is somehow connected to 5G cellular networks has repeatedly gained traction on social media. Though such conspiracy theories are self-evidently absurd, any negative press about 5G implementation typically causes a resurgence in the confidence of the conspiracy theorists that there is something wicked about the cellular broadband system. Hence, such rumors swelled this week, after Verizon and AT&T announced on Tuesday that, in response to concerns that the 5G technology will interfere with the safety equipment that determines an airplane's altitude, they would delay expanding the cellular service near specific airports.

The term 5G applies to the new generation of cellular broadband technology that began being deployed worldwide in 2019. Cellular infrastructure for wireless communications needs to be upgraded roughly every ten years, and the new generation of technology is designed to be faster than its predecessor, 4G, as well as containing better bandwidth and a superior ability to quickly transmit large amounts of information. In addition, as usually happens when there are advances in forms of radio communication, the technology for 5G had to move up the electromagnetic spectrum in frequency. This is what makes it possible for this type of wireless signal to transfer such large amounts of data, though the trade-off is that such signals are not as able to travel as far without degrading as their lower frequency predecessors.

In addition — and unfortunately for airlines — 5G also uses a section of the radio spectrum that sits very close to the one assigned for vital aircraft operations. The spectrum overlap means that 5G towers, which in practice are smaller and less bulky than their predecessors, won't be deployed near airports for the time being.

Although more than 90 percent of the planned 5G expansion will continue as anticipated, the announcement is still a setback for telecommunications companies. It reflects continued tension between airlines companies and regulators on one hand, and cellular companies on the other.

It does not, however, have anything to do with 5G technology actively spreading COVID-19.

RELATED: Why public health experts are worried about 5G, the next generation of cell network

Indeed, there is no evidence that 5G towers are linked to COVID-19 in any way.

Writing for The Conversation, University of Amsterdam professor Marc Tuters and University of Manchester professor Peter Knight likens misinformation to viruses, explaining that there are "several different strains" of conspiracy theories. Some internet commentators insist that 5G technology was launched in Wuhan (which is not true) and is therefore somehow linked to the start of the pandemic. Others explicitly accuse 5G of directly transmitting the virus, although some say the bad guys use a more circuitous route: Releasing the virus to force people to take "vaccines" that get "activated" by 5G. There are people saying that the SARS-CoV-2 virus was created to force people to stay home while engineers installed the technology, or that both it and the pandemic are part of some larger plan to "depopulate" the planet.

There is no evidence of any conspiracy involving the telecommunications industry and the COVID-19 pandemic. Perhaps more importantly, diseases can not be spread through radio waves. Meanwhile the vaccines, including those using the new mRNA platform technology, are as safe as any of the other common inoculations that people take. Yet despite concerted efforts by public health authorities to disseminate this information, conspiracy theorists everywhere from The Netherlands to Bolivia have destroyed 5G towers based on these beliefs.

The conspiracy theories are themselves a pandemic of information, which some experts have dubbed an "infodemic."

The 5G conspiracy theories are simply mutations of longstanding fringe beliefs about technology. In the 1990s, for instance, many people claimed that the military's High Frequency Active Auroral Research Program (HAARP) was being used for weather and mind control. In actuality, the program was merely conducting experiments in the ionosphere. The challenge in fighting conspiracy theories is that, even though their purveyors often say they are keeping an open mind, they are most attractive to mindsets that are closed to persuasion.

"Conspiracy theorists usually have a complete worldview, through which they interpret new information and events, to fit their existing theory," Tuter and Knight explained in The Conversation. "Indeed, one of the defining characteristics of conspiracy thinking is that it is self-sealing, unfalsifiable and resistant to challenge. The absence of evidence is, ironically, often taken as evidence of a massive cover up."

Tom Phillips, the editor of a British fact-checking organization called Full Fact, told Vox that this phenomenon is not linked to political ideology.

"This really crosses the spectrum — lots and lots of political leanings and different types of conspiracy theory can find something in the 5G theory," Phillips explained, adding that similar theories circulated when 3G and wifi were first introduced. "A lot of those fears were just transplanted onto 5G when the rollout of that began."

Writing for Media International Australia, three professors from Queensland University of Technology described how organizations that have ideological, political or financial motives to promote misinformation have benefited from platforms like Facebook. When the pandemic broke in early 2020, they managed to "swiftly retro-fit" their views and gain popularity among people disinclined to want to accept the scientific facts about COVID-19. Fact-checkers were at a disadvantage because conspiracy theorists tend to reject information that contradicts their preferred beliefs; companies could only do so much to take down misleading posts, and when they did so it was often characterized by conspiracy theorists as proving their point. The misinformation was also spread by celebrities, who through their name recognition had a natural advantage in gaining attention for their views even if their opinions proved controversial.

"It is already evident from our present analysis, however, that the COVID/5G conspiracy theory is a product of the collision of long-standing conspiracist beliefs about the supposed health dangers of 5G, as well as about vaccines, global elites, China and other well-established targets of suspicion, with the emerging coronavirus crisis," the authors write.

Of course, as the issue with airplane radar sharing bandwidth with communications reveals, there are certainly legitimate concerns about 5G. Just not the ones that the conspiracy theorists talk about. Indeed, there are health experts who believe that the part of the electromagnetic spectrum associated with 5G could have mild effects on human health.

"Even though the radiation associated with 5G technologies hasn't been investigated as extensively as that associated with current cell phone technologies, there is a substantial body of literature and evidence to indicate a significant impact of exposure on human health and development," Dr. Jerry Phillips, a professor at the Department of Chemistry and Biochemistry at the University of Colorado, told Salon by email in 2018. "Of concern here are not just the potential effects of 5G-associated radiation, but what might result from the combined impact of 5G-radiation with other sources of non-ionizing radiation in our environment. Certainly, a more careful and thorough assessment of the risks to human and environmental health are warranted."

And, of course, there are the pilots and airline companies who note that it interferes with important equipment — namely, their radio altimeters.

"The radio altimeters on our aircraft determine not only the height above the ground in real terms, not just pressure and altitude, but in real terms above the terrain, as we come in for a landing or we're taking off," Joe DePete, president of the Airline Pilots Association, told Yahoo Finance earlier this month. "But they're tied to many other systems in our aircraft."