Like previous COVID waves, omicron has largely bypassed much of Africa — or has it? 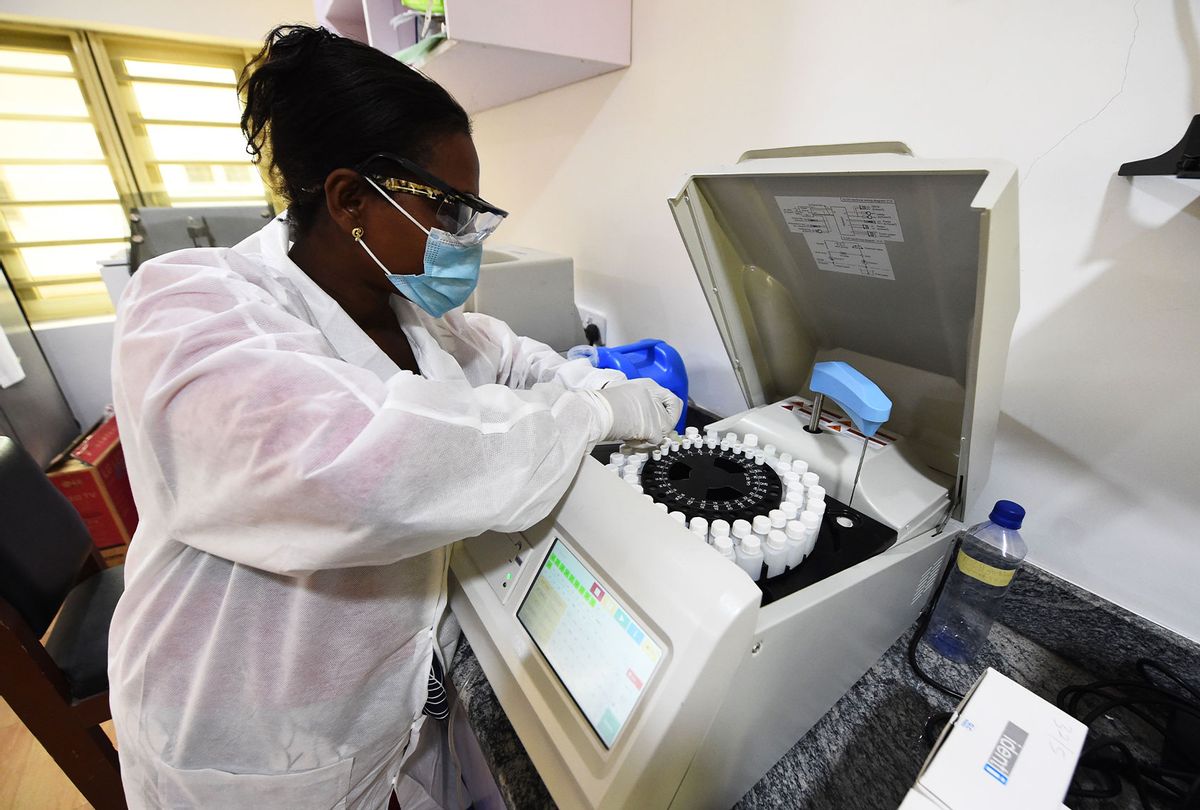 Laboratory assistant director Stella Atewe analyses chemistry profiles at the Lagos State Isolation Centre in Yaba, Lagos, on January 22, 2021. - The number of confirmed COVID-19 cases in Nigeria is increasing rapidly following daily reports by the Nigeria Centre for Disease Control (NCDC) even as Lagos, Nigeria's commercial capital, accounted for the highest number of cases in the country. (PIUS UTOMI EKPEI/AFP via Getty Images)
--

On November 11, 2021, four international travelers in Botswana tested positive for COVID-19, nearly four days after they entered the country. Per protocol, the virus samples were genetically sequenced, which is when scientists discovered a variant they had never seen before — what we now know as omicron.

Around the same time in November, in the South African province of Gauteng — where Johannesburg is located — fewer than 1 percent of the population was testing positive for COVID-19. A couple weeks later, COVID-19 cases skyrocketed. Scientists subsequently sequenced a few positive cases and found that omicron became the dominant strain in Gauteng in less than two weeks, not long after the region had been devastated by the delta variant. Omicron has now rapidly spread across the world, and is the cause behind an increase in surges, lockdowns and hospitalizations. According to data analyzed by the New York Times, the United States, France, India, Italy, Brazil, Spain, Argentina, Germany and the United Kingdom are the countries currently experiencing the highest number of daily average cases thanks to Omicron.

In South Africa, as Salon previously reported, COVID-19 case numbers in South Africa fell fast nearly a month after they spiked. But omicron, according to data maps, didn't appear to spread across other parts of Africa, like in sub-Saharan Africa. In December, Uganda confirmed its first omicron case—yet with only 4.1 percent of the country vaccinated, according to data the country is averaging 302 cases a day. Similarly low spread appears to be happening in Ghana, Kenya, and Malawi, too, all countries that have very low vaccination rates. Did sub-Saharan African countries dodge omicron? And if so, how?

Related: In South Africa, COVID cases fall as fast as they rose — suggesting the omicron wave could be brief

Since the pandemic's inception, the infection pattern across the continent has not followed the same pattern as elsewhere in the world. Back in August 2020, less than a year into the global pandemic, scientists were struggling to figure out why cases and mortality was so low in sub-Saharan Africa. One theory turned on the relative youthfulness of the population in many countries, noting that age is inversely correlated with COVID-19 mortality rate. Another theory posited in Science magazine was that the African population in general had previous exposure to related coronaviruses, which had primed the population's immune system against SARS-CoV-2.

Almost a year and a half later, however, cases in sub-Saharan Africa continue to be low compared to the rest of the world (although Nigeria is a slight outlier among those countries). Yet now, scientists are less convinced that the reason relates to any innate immunity or demographic situation, and perhaps more due to the lack of testing — meaning case counts are actually high, they're just not tested.

In other words, the appearance of low COVID cases in sub-Saharan Africa may merely be a mirage.

"Testing is a lot less and, because [omicron] is a milder variant people are having milder-like symptoms and then they don't test," said Dr. Monica Gandhi, an infectious disease doctor and professor of medicine at the University of California, San Francisco. "What's usually alerting people in low-income countries to something really bad happening with a surge was hospitalizations — for example in India, it wasn't just that they were idling testing in the beginning of March, they basically started seeing people coming into the hospital, and then they ramped up their testing."

"In sub-Saharan Africa, if you don't see your hospitalizations going up, you're not going to just test within a low income setting," Gandhi said, adding that the reason could be funding. "What I think is happening in sub-Saharan Africa is that they are going through omicron, but it's more mild, maybe they have enough population immunity around and they're not testing as much."

Motaze and colleagues published a study showing that climate factors, like temperature and humidity, have very little effects on epidemic peaks — defying any theories that the climate has anything to do with the appearance of few cases in sub-Sahara Africa.

"This idea should be dropped," said Fidisoa Rasambainarivo, another one of the paper's authors. "Modelling work clearly indicates that climate does not constitute the protective factor we were hoping for."

Scientists called for vaccine equity, and access to care.

"Following the many variations in risk factors revealed in our article, vaccination coverage and protection will likely be heterogeneous within and between countries," Rasambainarivo said. "Scientists need to work with authorities to minimize those differences, because they will have consequences for the pandemic globally."