In South Africa, COVID cases fall as fast as they rose — suggesting the omicron wave could be brief 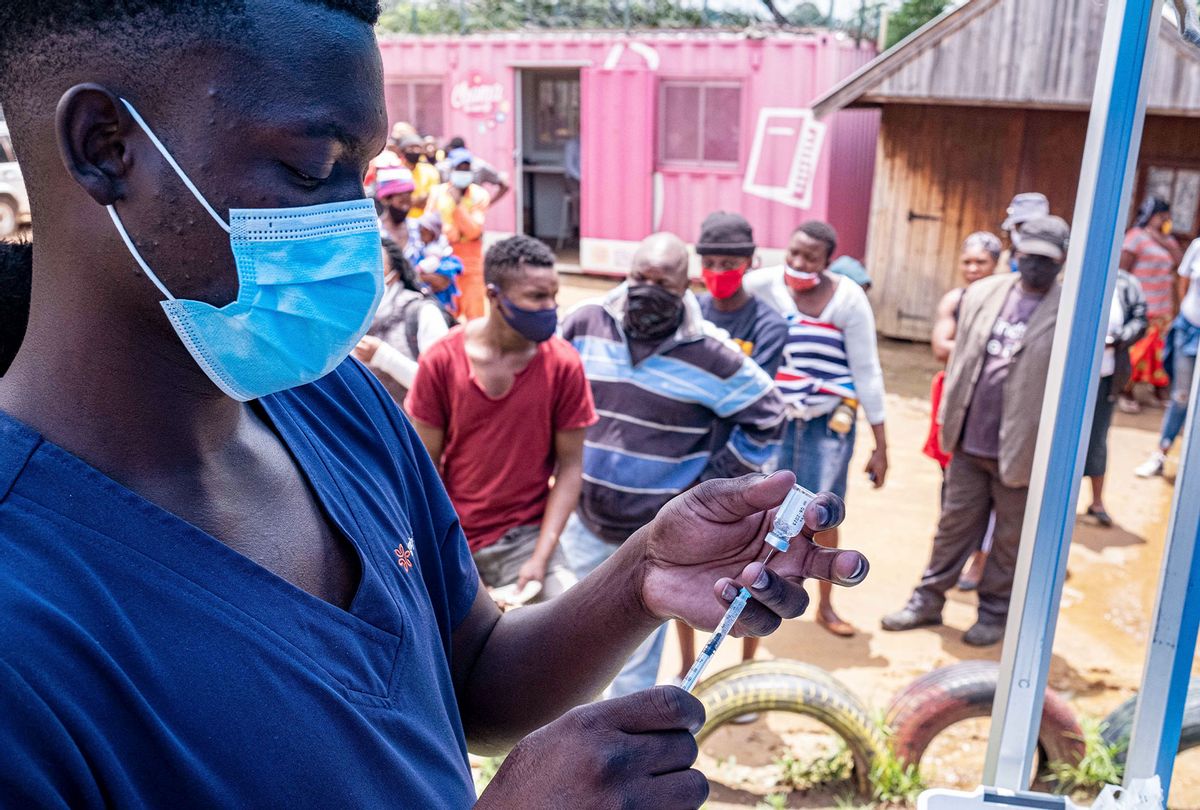 A health worker fills up a syringe with a vaccines dose against COVID-19 as people queue at the Kya Sands informal settlement to be vaccinated by the Witkoppen clinic in Johannesburg on December 8, 2021. - Anti-Covid vaccines may lose effectiveness against Omicron, but one more dose could remedy this. Initial elements, notably given by the Pfizer laboratory, shed light on the capacity of the new variant to resist vaccination. Omicron is "probably not sufficiently neutralized after two doses", admitted Wednesday the groups Pfizer and BioNTech, whose anti-Covid vaccine is given in two injections. (EMMANUEL CROSET/AFP via Getty Images)
--

As goes South Africa, so goes the rest of the world.

That sentiment might capture the hope of the health care community as they observe the infection pattern of omicron variant in the Southern Hemisphere nation of nearly 60 million people. When cases of the newly discovered COVID-19 mutation skyrocketed in South Africa in November and December 2021, the world took notice, fearful that it would soon reach the shores of all nations. After scientists learned that the SARS-CoV-2 strain was more transmissible than other viruses which cause COVID-19, political leaders like President Joe Biden began preparing their nations for the worst.

Now, as South Africa emerges from the other side of its omicron wave, observers hope that the rest of the world will also find itself in better shape at the end of this chapter of the pandemic than it was during other variant phases.

Experts in the country believe the omicron surge there has already peaked, with the government issuing a statement on Dec. 30 explaining that there had been a 29.7 percent decrease in the number of confirmed new cases for the week ending on Christmas Day, compared with the number from the previous week (from 127,753 down to 89,781 cases).

"All indicators suggest the country may have passed the peak of the fourth wave at a national level," the statement added, noting that there were only two provinces that reported increases in cases (the Western Cape and Eastern Cape). Officials also noted that, although the variant remains highly transmissible, hospitalizations have not increased as much as during previous COVID-19 waves. "This means that the country has a spare capacity for admission of patients even for routine health services," they pointed out.

As a result of the rapid decline in COVID-19 cases, the South African government has loosened some of its earlier restrictions. This includes allowing establishments that serve alcohol to revert back to full license conditions, lifting all curfews and allowing gatherings of up to 1000 people indoors and up to 2000 people outdoors (or no more than 50 percent capacity if a venue is too small for those restrictions to be practical).

This does not mean that the news from South Africa is entirely auspicious. The government still warns that the virus is highly transmissible and has led to both severe hospitalizations and death. Because the South African population has a lower vaccination rate than the United States and has endured previous dramatic COVID-19 spikes, the likelihood is that much of the population already had some level of pre-existing immunity due to previous exposure. Omicron may lead to more severe cases among populations that have had less exposure, including in the United States.

Despite these concerns, experts agree that the situation in South Africa offers hope to the rest of the world. If the omicron variant is less harsh than initially anticipated where it was first discovered, they think, this could be a good sign for everyone else.

"When you start to see different kinds of data all pointing in the same direction, you begin to feel more confident that it's going to hold up," Dr. Jessica Justman, a Columbia University Medical Center epidemiologist, told Fortune Magazine. Dr. Monica Gandhi, an immunologist at the University of California, San Francisco, told the publication that "we're now in a totally different phase. The virus is always going to be with us, but my hope is this variant causes so much immunity that it will quell the pandemic."

Gandhi expressed similar views to Salon last month, explaining that although she expected omicron to cause a new wave of infections because of its high transmissibility, "there is now evidence that Omicron is less severe than previous strains." What scientists do not yet know, she added at the time, is "if this is because of increasing cellular immunity in the population in December 2021 versus an inherent property of the strain that makes it less virulent."

One of the most puzzling details about omicron is that its origins remain mysterious. Though it was first detected in Botswana, the earliest direct relative that scientists were able to locate is a SARS-CoV-2 virus that existed in mid-2020. This means that it could have incubated in an immunocompromised patient, reinfected humans after an earlier SARS-CoV-2 antecedent infected an animal, or that it arose in one of the many areas of the world where COVID-19 vaccines and treatment have been sub-standard due to poverty. Regardless of its origins, its very existence strongly suggests that there will be future SARS-CoV-2 strains that similarly emerge from left field.

The rise of the omicron variant: