In historic address, Biden tells unvaccinated they are playing with "life or death" 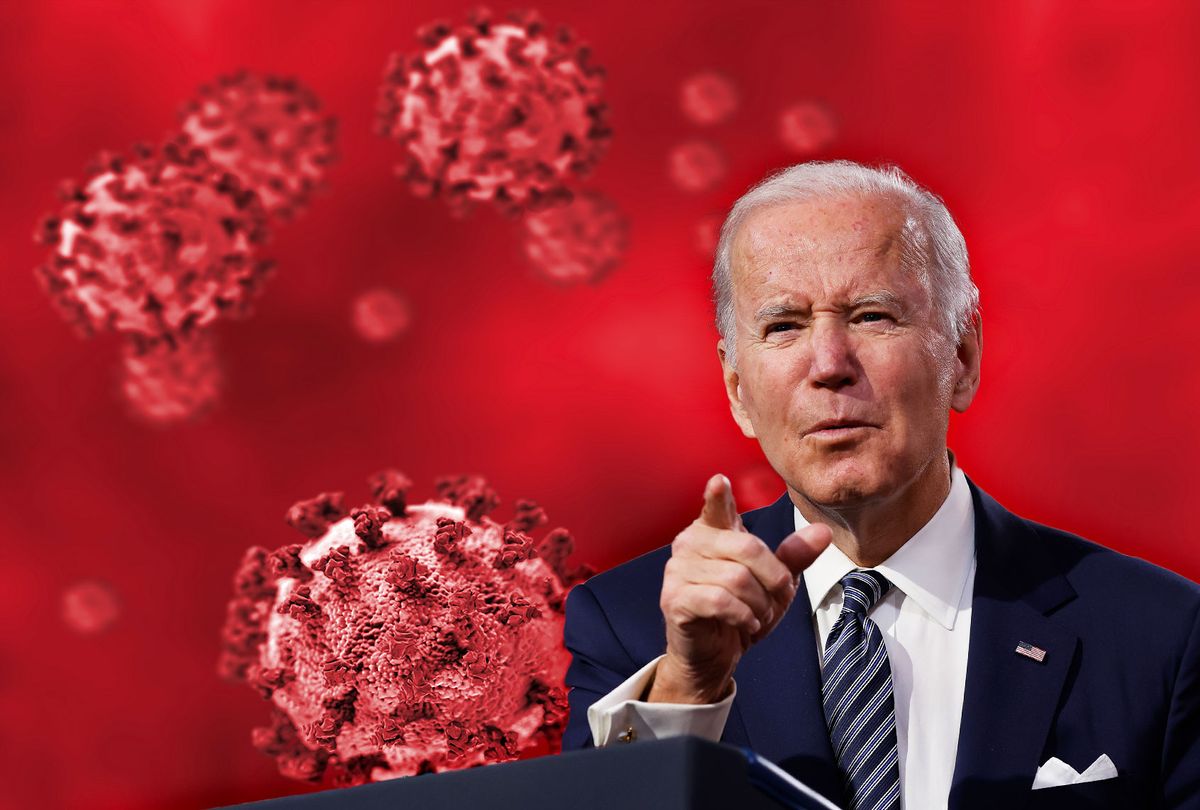 In a historic public address, President Joe Biden spoke on Tuesday about new measures for fighting the omicron variant — a mutant strain of the SARS-CoV-2 virus that now accounts for nearly three-fourths of new COVID-19 infections in the United States — and specifically announced that the government is purchasing 500 million at-home COVID-19 tests for free distribution.

While delivering these remarks, Biden echoed back to one of the main themes from his September national address, in which he said that the COVID-19 pandemic had become "a pandemic of the unvaccinated." Recalling that speech, Biden stated plainly that those refuse vaccination are only hurting themselves and others.

"I promised when I got elected that I would always give it you straight from the shoulder," Biden opened, explaining that he felt it was necessary to answer questions about the omicron variant as Americans head into the Christmas weekend. "If you are not fully vaccinated, you have good reason to be concerned," he warned.

"It's free. It's convenient. I promise you it has saved lived. And I honest-to-God believe it is your patriotic duty," the president told the American people. He later observed that individuals who are unvaccinated are playing with "life or death" not only for themselves, but for the people around them — both by spreading the infection and by overwhelming hospital systems that need to care for them and those they infect. The president characterizing getting vaccinated as "the only responsible thing to do."

Biden also tried to strike an optimistic tone, stating that there are "three big differences" between where America was when the pandemic reached out country in March 2020 and the present day. One is that 200 million Americans have received COVID-19 shots, meaning that if they get infected they are unlikely to present severe symptoms. In addition, Biden pointed out that "we are prepared today for what's coming," which was not the case when the virus first reached the United States. Finally, Biden said that "we know a lot more today than we did in March 2020," such as by having more resources to keep schools open and making it possible to vaccinate children over the age of five.

"We should all be concerned about omicron, but not panicked," Biden explained.

The president also mentioned a COVID-19 action plan that his administration had already developed for the winter months, adding that it is being revised to account for new conditions. This includes sending hundreds of additional vaccinators to sites throughout the United States and ordering FEMA to create vaccination sites in areas where there is high demand. Biden also gave credit to President Donald Trump's administration (while not mentioning the former president by name) for having the government invest in the programs that helped America develop COVID-19 vaccines. (It is unclear if Biden mentioned this because Trump was booed by his own supporters on Sunday for saying that he had received a booster shot.)

Biden also told the American people that, starting next month, the administration will make sure that Americans have access to free rapid at-home COVID-19 tests by purchasing half a billion of those tests to be distributed to those who request them online. He also said that, as of this week, the federal government will set up emergency testing sites in areas that desperately need them, such as in New York City (where there has been a surge of omicron cases). Biden promised that the government will send PPE (personal protective equipment) to people who need it and send more doctors, nurses and media to underserved areas. Finally, he mentioned a recent court decision that reinstated his vaccine mandates, which he characterized as necessary for protecting public health and keeping businesses open.

Salon spoke to public health experts and doctors who characterized the president's measures as welcomed and "appropriate."

"What the president has described is an appropriate and much needed intensification of vaccination, boosters, masking and at-home testing," Dr. Russell Medford, Chairman of the Center for Global Health Innovation and Global Health Crisis Coordination Center, told Salon by text message. "The commitment of the federal government to 500 million at-home tests, free of charge, delivered directly to peoples homes, is a critically needed first step."

Medford added that it was "notable" that Biden did not call for lockdowns and said he was "somewhat surprised" that Biden "did not re-iterate and emphasize his administration's plans to make Paxlovid [a new anti-COVID-19 pill] available to the American public and globally."

Dr. Monica Gandhi, infectious disease doctor and professor of medicine at the University of California–San Francisco, also critiqued Biden for not mentioning Paxlovid. Gandhi characterized Paxlovid as "a very exciting option to prevent hospitalizations and deaths among the unvaccinated by 88%, [which] still works against variants." She said she wished Biden "would have given a timeline for the approval of this medication."

That said, Gandhi also had praise for Biden's speech, arguing that "the emphasis on increasing testing is a good one in light of the Omicron variant." She also praised his emphasis on the importance of getting boosters.

Dr. Alfred Sommer, dean emeritus and professor of epidemiology at Johns Hopkins Bloomberg School of Public Health, told Salon by text message that he agrees with Biden's message about getting three doses of the vaccine as being "the most important thing we can do." He felt that Biden encouraging people to vacation with their family is "acquiescing with what everyone is going to do anyway and is 'probably' right," although Sommer added that he does not know why the Centers for Disease Control and Prevention (CDC) and other relevant agencies have yet to release preliminary data on the vaccination status of omicron patients.

Sommer said such data would be helpful in deciding what kinds of gathering were safe.

"If I knew that 80 percent of people in an area were fully boosted, and none of them were hospitalized, or only 10 percent of the hospitalized had been boosted, there would be some good evidence that family gatherings were indeed safe for the boosted," he added.

While Biden's speech was scientifically sound, it remains to be seen whether it will be rhetorically effective. In other words, will it have the galvanizing effect on unvaccinated Americans that the president seems to hope for?

One political historian was marginally hopeful.

"By telling it straight about omicron, President Biden presented a needed contrast to the gaslighting of the pandemic and the peddling of quack cures that we heard from the previous president," Dr. Allan Lichtman, a political historian at American University, told Salon by email. "He delivered a down-to-earth, practical message. The president told Americans what they need to do to say as safe as possible and explained what his government is doing to help them say safe. He issued a needed warning to the purveyors of misinformation, although it is unlikely that they will heed his words."

Lichtman added, "Ultimately, however, the success of any message is dependent on actual progress on the ground for the American people. As Robert Straus, the campaign chair for President Jimmy Carter, said in explaining Carter's loss in 1980: 'The real world is all around us.'"

This story was updated at 5:19PM to add additional comments from Dr. Monica Gandhi.