This is "how the space for nonmilitary options gets slowly closed off," congressional aide tells The Intercept 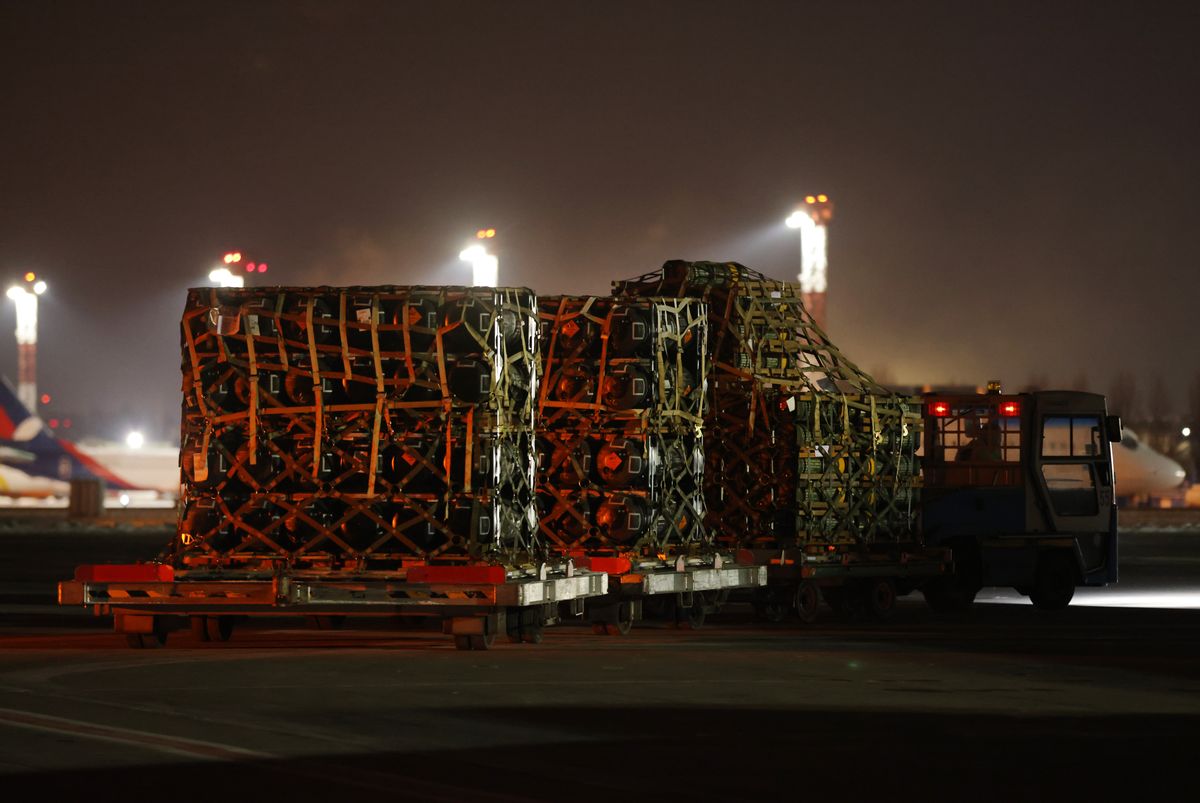 An airport vehicle pulls a shipment of weapons that include Javelin anti-tank missiles and other military hardware delivered by the U.S. military at Boryspil Airport near Kyiv, Ukraine, on Jan. 25. (Sean Gallup/Getty Images)
--

Despite warnings that a dangerous war with Russia could soon be unleashed if diplomatic efforts fail, House Democrats are reportedly looking to bypass typical procedures and fast-track a vote on legislation that would send $500 million in military aid to Ukraine — a move that critics say only adds fuel to the fire.

The Intercept reported Tuesday that "Democrats in the House of Representatives are planning to expedite a massive bill that would dramatically increase U.S. security assistance to Ukraine and lay the groundwork for substantial new sanctions on Russia — hastening a war-friendly posture without opportunity for dissent as concerns over a military invasion abound."

"House Speaker Nancy Pelosi (D-Calif.) told members on a caucus call Tuesday that she's looking to skip marking up the bill and move it straight to the House floor, setting up the possibility of a vote as soon as early next week," The Intercept reported, citing two unnamed congressional sources.

Formally known as the Defending Ukraine Sovereignty Act of 2022, the legislation is co-sponsored by 13 Democrats in the House and 41 in the Senate, including Majority Leader Chuck Schumer, D-N.Y.

News of the push for speedy passage of the bill comes just one day after President Biden put 8,500 U.S. troops on standby to deploy to Eastern Europe and as antiwar voices increased their warnings against military action.

One senior Democratic aide told The Intercept that the House leadership's plan to rush a vote on the Ukraine measure "is how the space for nonmilitary options gets slowly closed off in Washington, without any real debate."

If passed, the bill would authorize $500 million in "supplemental emergency security assistance to Ukraine" if Russia invades the country. The legislation would also green-light $3 million in "international military and education training" for Ukraine and ramp up U.S. sanctions against Russia.

"Is Pelosi insane, fast-tracking massive weapons transfers to Ukraine and ginning up a new war with a nuclear-armed Russia? Don't these Democrats get it?" Medea Benjamin, co-founder of the anti-war group CodePink (and a frequent contributor to Salon), told Common Dreams in response to the news of House Democrats' plans. "The American people don't want more war!"

"We can think of a lot better uses of $500 million than weapons to Ukraine that only intensify the conflict and feed the war machine," Benjamin added. "What we desperately need is de-escalation and vigorous diplomacy, including guarantees that Ukraine won't join NATO."

It's unclear how much opposition the attempt to provide Ukraine with more U.S. arms will spark within the Democratic caucus, which has struggled to pass legislation that would confront pressing domestic and global crises, from child poverty to climate change.

No Republican has co-sponsored the Ukraine legislation, which is led by Rep. Gregory Meeks, D-N.Y., in the House and Sen. Bob Menendez, D-N.J., in the Senate.

Warren Gunnels, staff director for Sen. Bernie Sanders, I-Vt., tweeted an antiwar quote from the late rapper Tupac Shakur in response to the Intercept story on House Democrats' plan. Sanders is not among the Ukraine bill's Senate co-sponsors.

Even without action from Congress, the U.S. is currently pouring arms into Ukraine, as evidenced by Ukrainian Defense Minister Oleksii Reznikov's tweet Sunday hailing the arrival of "80 tons of weapons" from "our friends in the USA."

As the New York Times reported Tuesday, the U.S. "has authorized Estonia, Latvia, and Lithuania to send Stinger anti-aircraft missiles to Ukrainian forces, augmenting the Javelin anti-tank missile deliveries to Ukraine that Britain began this month."

Such developments in recent days have intensified concerns that the U.S. is on the verge of embarking on yet another military intervention that could have devastating human consequences.

Warning against military action and pressing all parties to engage in diplomatic talks, Bridget Moix of the Friends Committee on National Legislation said Tuesday that "war represents a calamitous failure of governments to do their most basic job of keeping their people safe."

"President Joe Biden and members of Congress, expanding NATO any further would constitute an unnecessary provocation as well as an unwise military obligation," she continued. "Taking such expansion off the table would address Russia's primary security concern and reduce the likelihood that U.S. troops will be sent to yet another unwinnable war. Simply by acknowledging this, you could save thousands of lives and billions of dollars."

Read more on the Russia-Ukraine crisis and the threat of war: