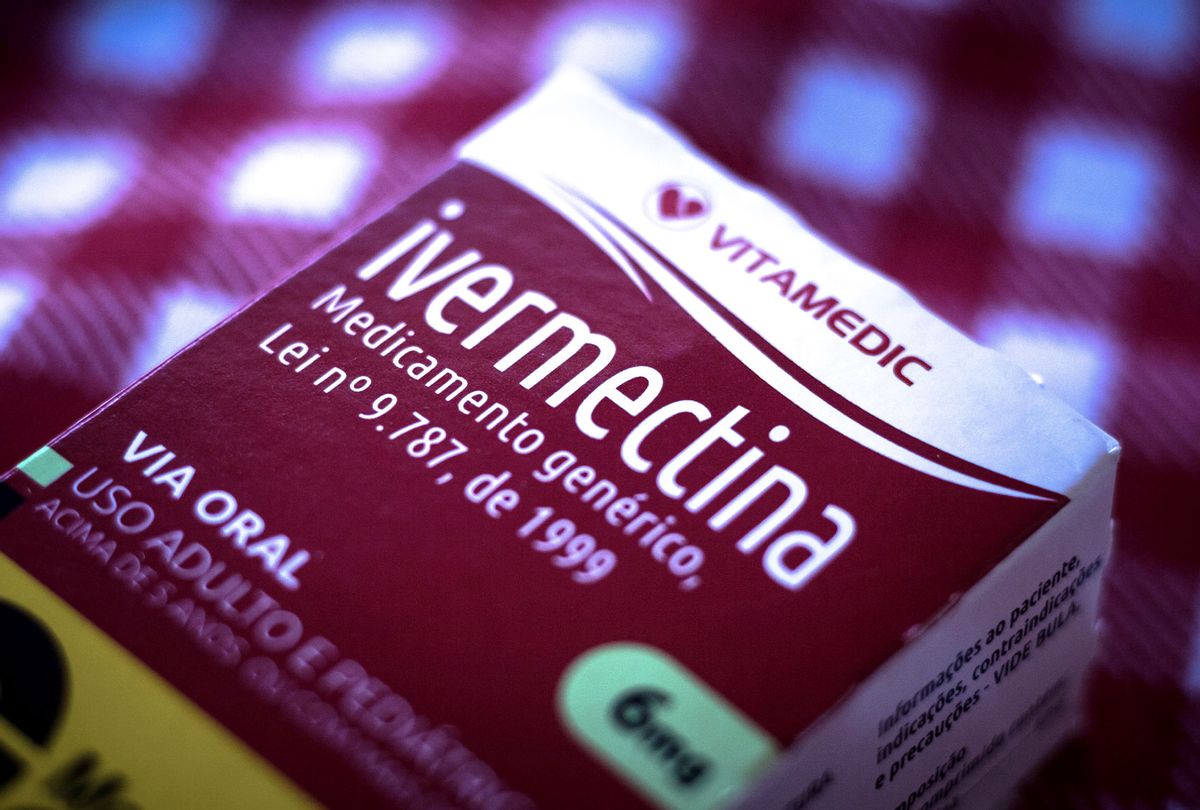 In this photo illustration a box of Ivermectina medicine seen on display. Manufactured by Vitamedic in Brazil Ivermectin has attracted global controversy as a potential COVID treatment. The World Health Organisation has advised against widespread use of the drug as a treatment for Covid 19. (Photo Illustration by Rafael Henrique/SOPA Images/LightRocket via Getty Images)
--

GOP state lawmakers throughout the nation are backing bills that would bar medical boards from disciplining doctors who promote and prescribe hydroxychloroquine and ivermectin – anti-parasitic drugs that are falsely being touted by far-right pundits as a COVID-19 wonder drug, according to BuzzFeed News.

Hydroxychloroquine first started to gain ground as a COVID-19 treatment back in the Spring of 2021, when Donald Trump heaped praise on the drug over repeated pushback from Dr. Anthony Fauci, the director of the National Institute of Allergy and Infectious Diseases. By May, Trump had announced that he was on a steady regimen of Hydroxychloroquine, even though there was no substantial scientific evidence of its efficacy in treating COVID-19. Ivermectin, by contrast, began making headlines shortly after Trump left office, when numerous right-wing advocacy groups – like America's Frontline Doctors and the Front Line COVID-19 Critical Care Alliance – began hawking it to the public.

The FDA has firmly advised against the use of hydroxychloroquine or ivermectin as treatments for COVID. Nevertheless, hundreds of doctors across the country are being sued for refusing to treat patients for the drug, as Salon reported in October.

RELATED: The conservative group using the courts to push ivermectin on COVID patients

According to BuzzFeed News, at least eleven states have proposed measures that would strip medical licensing boards of their powers to reprimand doctors who write prescriptions for the two drugs. Among them are Colorado, Florida, Idaho, New Hampshire, Pennsylvania, Mississippi, Indiana, Virginia, and West Virginia.

Two states, North Dakota and Tennessee have already signed such bills into law. Republicans control the legislatures in every state named, with the exception of Virginia and Colorado.

Many of the state bills differ by a matter of degree. Some bills, BuzFeed noted, "limit medical boards' authority to reprimand a doctor, dentist, or pharmacist publicly discussing COVID treatments," while others "[allow] doctors to prescribe drugs that aren't approved by the FDA to treat COVID."

RELATED: Did this virus come from a lab? Maybe not — but it exposes the threat of a biowarfare arms race

A BuzzFeed News investigation from September found that medical boards have "so far taken few steps to remove the credentials" of doctors who baselessly promote hydroxychloroquine and ivermectin.

Still, some of the measures have been met with significant pushback from medical associations, pharmacies, and other lawmakers throughout various states. Last month, a Maine medical board suspended the license of physician Meryl Nass over her promotion of COVID-10 falsehoods.

Even politicians aren't immune to the backlash: U.S. Rep. Andy Harris, R-Md., an anesthesiologist by trade, is under investigation for pushing the unproven treatment. A medical board in Kansas is likewise investigating a doctor, Republican state Sen. Mark Steffen, who prescribed ivermectin to treat COVID.