Beef stroganoff signals comfort like nothing else. Combine it with nachos — and you've got a guaranteed home run 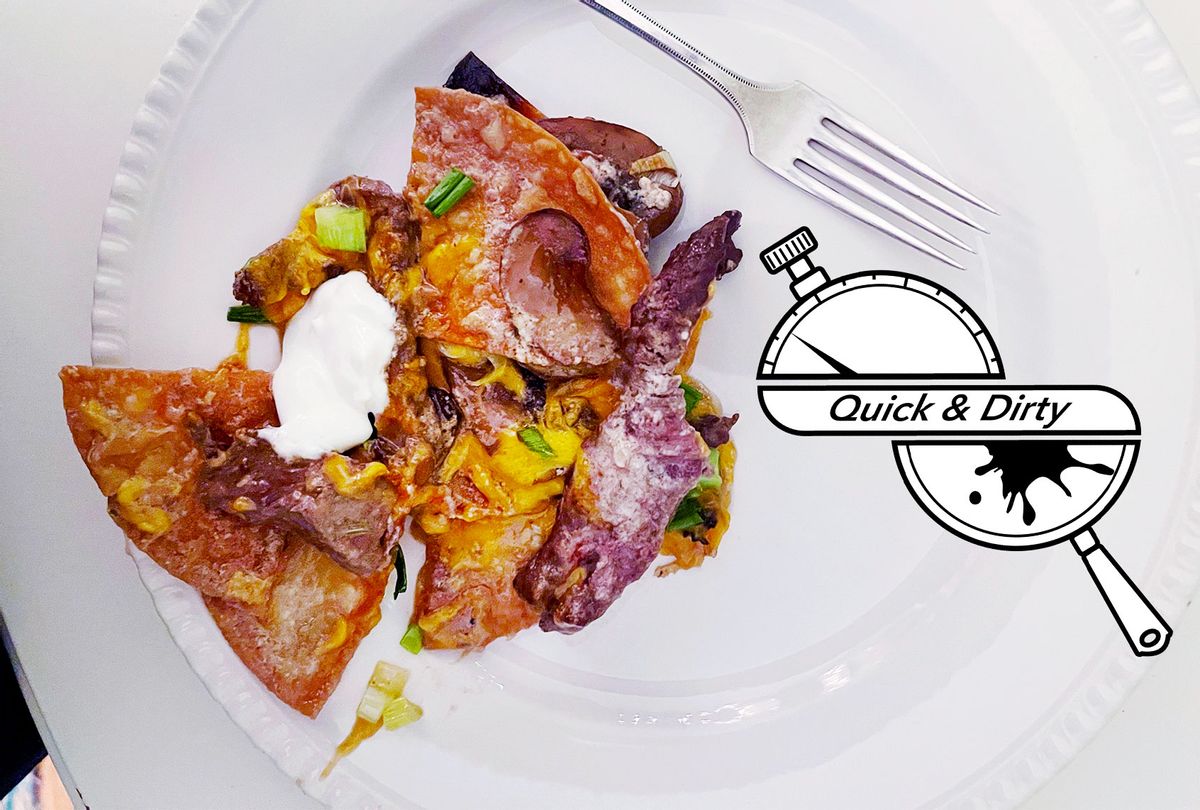 After the pandemic began, it wasn't too long before I realized that I was going to have to rethink some of the pleasures I previously considered to be specific to restaurants. Want a handmade cocktail? Better learn how to make one at home. Want a big plate of classic apps to share? Time to develop a whole new respect for the construction of the blooming onion, the basket of garlic bread and the humble but mighty platter of nachos.

Food writer Dan Whalen's "Nachos for Dinner" arrives at exactly the right moment — when quarantining fatigue and winter doldrums conspire to create a simultaneous, conflicting desire to socialize and to hibernate. Whalen takes the familiar classic and shows off its inherent versatility, as he's done in his previous books like "S'mores!" and "Tots!"

"Nachos were the first thing I ever learned how to make," Whalen says during a recent phone call. "As a young kid, I would come home from school in the afternoon and put some chips on a plate and put the cheese on top, microwave it — and that was like my afternoon snack most days. It's those little dishes like that that really informed me as a cook and made me pursue this in my life."

RELATED: This cheesy, no-tear French onion soup is ready in under 30 minutes

"Fast-forward to many years later, being a blogger and loving the idea of doing mashups — and nachos are such a great thing to mash up with," he continues. "There're so many things out there that you can 'nachofy,' or convert into nachos. And it's a great idea for that sheet pan dinner for easy suppers for the whole family. It's customizable, and you can make it how you love it."

There's nothing wrong with putting cheese on chips and calling it dinner, but Whalen's imagination sends the nacho on a trip around the world with creations such as bánh mì nachos, poke bowl nachos, tikka masala nachos, and more.

"It has always been interesting to me to be able combine all these different things and come up with new things, while making sure to shine a light and be super respectful of the places that they came from," he says. "I'm not trying to necessarily make nachos 'better' in any sense but just more sort of dinner-focused."

The clever name didn't hurt, but it was Whalen's genius "stroganachos" that made a true believer out of me. Rich and old-fashioned, there's something about beef stroganoff that signals comfort like nothing else. Combine it with cheesy, crunchy, salty nachos — and you've got a guaranteed home run.

I tweaked Whalen's recipe ever so slightly for the Quick & Dirty version, cooking the mushrooms longer and using his lime crema as both a filling and a topping. Serve these nachos at the dinner table, or eat them under a blanket on the couch. Either way, they're absolutely perfect.

Preheat your broiler to high heat. Meanwhile, over medium heat, melt the butter in a large frying pan.

Add all of the chips to a large sheet pan, spreading them out as evenly as possible.

In a medium bowl, mix the sour cream with the juice of the lime. Add a pinch of salt. Stir well.

Add the mushrooms and sauté until browned, about 5 minutes.

Add the steak to the pan and cook, stirring occasionally, until medium rare, another 4 minutes or so. Turn off the heat and stir in half of the sour cream and lime mixture.

Sprinkle half of the shredded cheese over the chips. Evenly add the steak and mushroom mixture, then the other half of the cheese.

Broil for 3 to 5 minutes, until the cheese is melted and the chips are just starting to brown. Keep a close eye on the pan.

Remove from the oven and top with the rest of the sour cream and lime mixture, plus the green onions. Serve immediately.

If you're feeling ambitious, "Nachos for Dinner" includes a recipe for homemade fried tortilla chips that are next-level good.