"It's about workers rising up saying, ‘You know what? This just isn't worth my life today’” 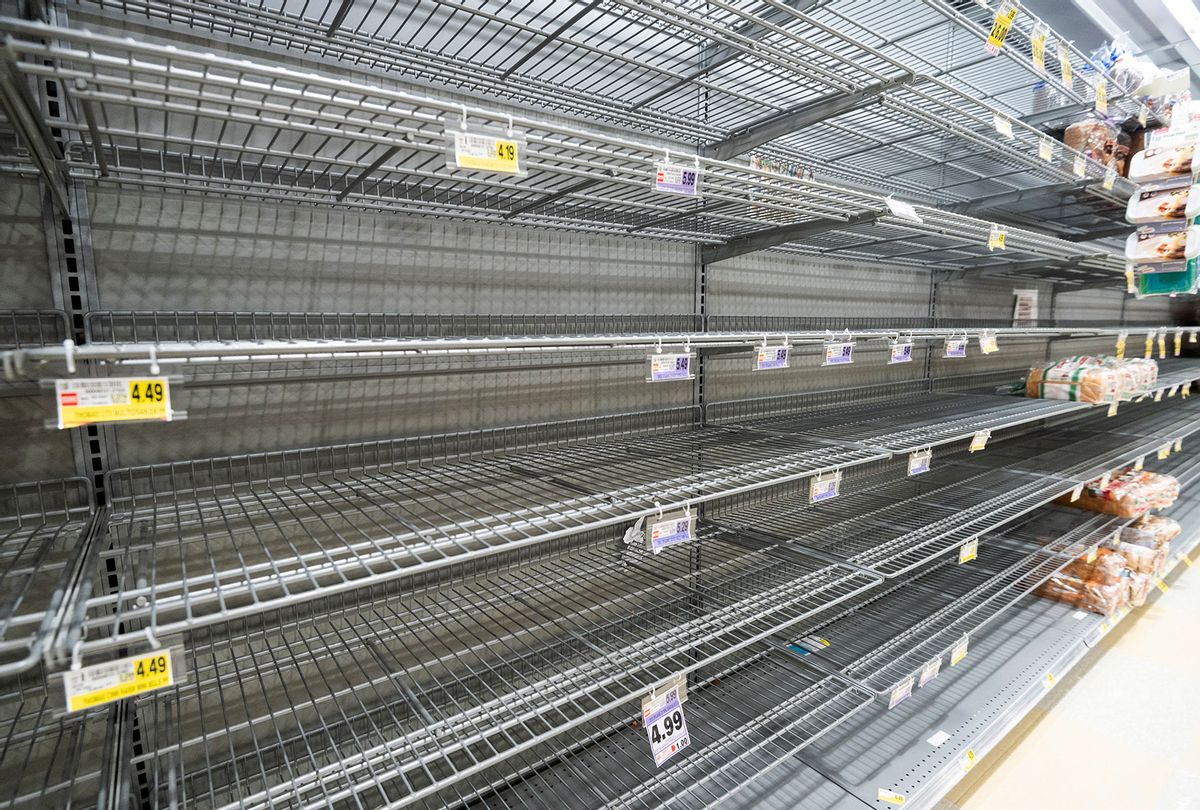 Two years into the pandemic, viral posts showing empty grocery store aisles across the nation are continuing to capture our collective attention. On the right, some blame President Joe Biden, misleadingly linking the phenomenon to socialism. From local chains in small towns to Trader Joe's in New York City, there has been an undeniable disruption in the ease at which Americans are accustomed to showing up at the store and walking away with exactly what they want, regardless of season or scarcity.

Since the early, meme-filled days of the Suez Canal blockage, explanations of how everything is related to a severely backed-up supply chain have permeated the news and social media. This is with good reason, as there are still millions of dollars of goods held up in shipping ports, trapped for the time being due, in large part, to a shortage in workers.

What has not been included in the conversation is how that shortage of workers has rippled from the coastal ports to nearly every industry that relies on in-person labor. Amid the Great Resignation, where hundreds of thousands of American workers have decided to move on from their employers and onto better opportunities, there has been a vast gap left behind. That gap has only widened due to inconsistent messaging and safety standards among the omicron wave, which has quickly become the prominent strain of COVID-19 in the US and forced many workers to take time off to recover.

The market is being reclaimed by the worker, and employers are being forced to offer better wages and benefits as they compete to fill record vacancies. Without acknowledging this shift in power, many companies run the risk of not having anyone to run their stores at all.

It's a stark new reality for so many powerful corporations that have relied on the desperation of entry-level minimum wage workers for so long. And it is far more to blame for the current disruption of your local store's shelves being out of the items on your grocery list than almost anything else.

The King Soopers and Kroger strike held by members of the UFCW Local 7 in Colorado over the last few weeks is a perfect case study of the larger labor issues impacting grocery shortages in the US.

Union members say they organized for many reasons, including demanding liveable wages, expanded healthcare benefits, and a less exploitative workplace culture. The main concern for many, however, has been safety. Kim Cordova is the current president of the UFCW Local 7 and has been leading workers throughout their efforts. She expressed fears for employee safety.

"More than 2,400 people quit on them [King Soopers] last year, and they have not been able to fill those spots," Cordova said. "And every day those numbers were growing."

In addition to making less than $15 an hour, hourly employees encounter safety hazards presented by customers who are anti-maskers or drug users, Cordova added.

"So, this supply issue is really a workers issue," she said. "And it's about workers rising up saying, 'You know what? This just isn't worth my life today.'"

(Representatives from King Soopers and Kroger did not immediately respond to a request for comment.)

King Soopers employees in Colorado have consistently asked for increased safety and security measures since the start of the pandemic. This came to a head in March 2021, when 10 people — three of whom were employees — were killed after a gunman opened fire in a mass shooting at a King Soopers in Boulder, Colo.

Though the shooter has since been deemed mentally incompetent to stand trial, employees have continued to advocate for enhanced security at stores. It was announced yesterday that the King Soopers where the shooting occurred was set to reopen.

Andres Becerril is a head clerk at a King Soopers in Aurora, Colo., and has witnessed the dramatic shift in the public perception of essential work.

"Finding out how expendable we were is what it really came down to," Becerril said. "We get told that they care about us. That they have our safety in mind — and then we asked for these things in regards to safety, like security guards or hand sanitizer, and it just kind of falls by the wayside. So, it's been pretty frustrating to get told that someone cares about you and then having to live with the opposite of that."

Since the beginning of the strike, workers made slow but steady progress towards reaching an agreement for a new contract that honors some of their demands for an improved workplace.

Finally, at the end of January, Denver-area King Soopers workers voted to ratify an updated three-year contract. More King Soopers stores in other regions of Colorado have yet to vote, and Ms. Cordova explained the pressure businesses like King Soopers face to meet workers' demands.

"If you go into grocery stores — like, if you crossed the line and went in — they have no product," Cordova said. "They're not operating any of their departments, you can only buy center of store stuff, no customer service. They're not even selling fuel in most of these stores, because by law, you have to have a worker there."

The struggle that these workers in Colorado face is not unique; in fact, there have already been several efforts to organize with other Krogers locations across the country. This all seems to work in tandem with a new type of worker that you can find everywhere: one that does not value a paycheck over their wellbeing.

With their historic victory, the members of the UFCW local 7 could help determine the fates of other similar jobs that historically do not come with strong work protections and liveable wages. Until then, those thousands of job openings will likely stay vacant, much like the shelves at your local grocery store.