Journeying through New Orleans for the best vegan king cakes 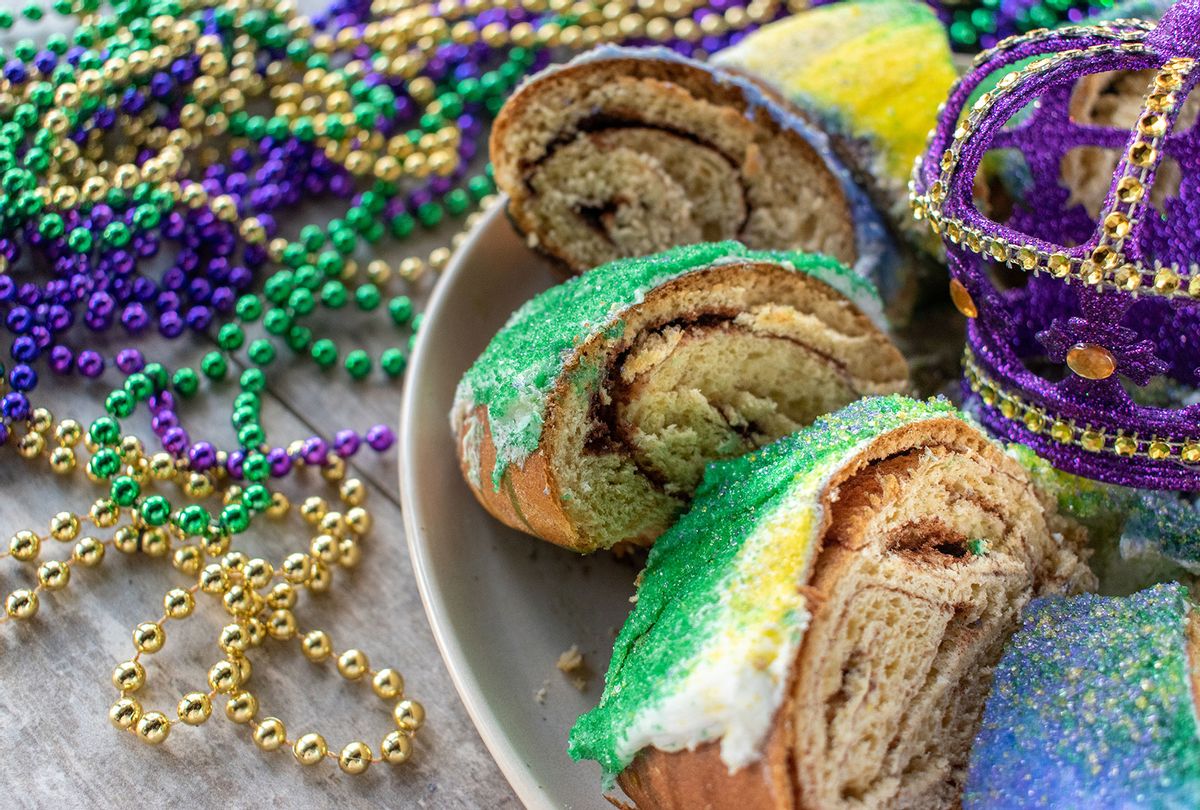 Carnival season is upon us, and with it comes a variety of pleasures specific to the holiday. One such pleasure is the king cake, a New Orleans staple this time of year that, in its simplest definition, is a ringed pastry topped with colorful sprinkles containing a small plastic baby hidden inside. Beyond that base-level definition comes a vast array of preferences and specificities that differ based on personal taste and regionality. Some people prefer the standard king cake, which has cinnamon baked into the pastry and purple, gold, and green sprinkles on top. While others may go for king cakes filled with cream cheese, fruit, or chocolate. Regardless of which flavor or style is your favorite, and whether you buy your king cake from a small beloved bakery, or the local grocery store, they're pretty hard to beat.

Part of the fun of making your way through a king cake is the fact that they're not available year round, or shouldn't be. King cake season kicks off on Twelfth Night (12 days after Christmas), also referred to as Epiphany, and ends shortly after Mardi Gras day (AKA, Fat Tuesday) which is the day before Lent. If you're finishing off the remaining slices of your cake after Ash Wednesday, we won't judge you. But you may get a side-eye or two from New Orleans natives if you're seen eating king cake beyond that week. Just sayin.'

Related: We tasted 10 vegan butters in the name of science

About a year or so ago a combination of getting a dog that I fell obsessively in love with, and watching a terrifying documentary on modern animal agriculture called "Dominion" led me to convert to veganism cold turkey. Well, I guess now I should say "cold Tofurky." That quick change left me scrambling to find vegan substitutions for every day food items, as well as seasonal items like king cake. Necessity to continue living the snack-attack lifestyle I've been accustomed to put me in a position to do a lot of investigative taste tasting into where to get the best vegan king cakes here in New Orleans, where I live, and where many are finding themselves vacationing this time of year for Mardi Gras. Happy to share my findings with you here. Laissez les bon temps rouler, fellow vegan sweet tooths!

Located at 8640 Oak St in New Orleans, Breads On Oak offers organic, plant-based food that is addictively delicious. During carnival season, they make a variety of vegan king cakes offering a flavor for every palate. The standard flavors of vegan king cakes they offer include:

They also offer "adult" flavors, which have a little extra kick to them. Those flavors include:

I can't speak to the "adult" flavors, but I've tried most of the standard flavors and they're amazing. If being able to say "you'd never know they're vegan" is a selling point, you can definitely say that about these cakes. To top it all off, they offer online ordering/delivery of their cakes, and an option for a "mystery slice" which led me to try a new favorite, their Chocolate Tiramisu king cake. I just paused writing this to pick up my phone and order a a couple mystery slices for the house, but they're closed today. Sad! Well, moving on. Let's talk about more cakes!

This 100% Vegan & Plant-Based shop supplies vegan king cakes and other vegan treats like cookies, and even jambalaya via online ordering and local delivery to New Orleans, or from a number of local spots they do drops at such as the New Orleans Food Cooperative and the Mandeville Trailhead Market. The flavors of vegan king cakes they offer include:

I've only tried the traditional and cream cheese flavors, because they seem to be the most widely available, but always have my eye out for the others. I can think of no better review here than to say that I've put on actual pants, actual shoes, and left the house just for the sole purpose of getting a couple slices of their cake from the co-op. It's an instant mood boost, and their cakes have never let me down. Well, aside from the days they're sold out!

In a recent interview with Gambit, House of Slop owner Kora Jansen explained the backstory for her vegan shop's unusual name.

"That started with making savory food. My partner and I made food together a lot during the pandemic. This was before I started selling food. So I made this soup that was really tasty, a cabbage and sausage soup with a vegan sausage that I seasoned with fennel and paprika and all sorts of goodies, but (the soup was) really splashy. We were joking that it made that slop sound when you poured it in a bowl, and it took off as the House of Slop."

House of Slop specializes in vegan comfort food, and I've been making special trips for months to a local coffee shop here in New Orleans called Pagoda that carries her vegan donuts, which are the best vegan donuts I've ever had. When she started posting about her king cakes on Instagram, I placed a special order for a full-sized cream cheese king cake, which she personally delivered to my house. Let me just tell you that that cake did not last long. This is a beloved local pop-up and delivery option that I hope and pray will open a brick and mortar shop one day. Kora's stuff is almost too good. The vegan king cake flavors offered by House of Slop include:

So there you have it. A handy list for the best of the best when it comes to vegan king cakes if you live in New Orleans, like me, or are traveling here for Mardi Gras. With the variety in which bakers are now able to make healthy and tasty substitutions for animal byproducts, it's easier to be vegan than you'd think. Even in a city like New Orleans where the Mississippi River is half melted butter.