Trucker tantrum fizzles out: How the Supreme Court's anti-vaccine overreach backfired on the GOP

The right wants to import Canada's anti-vaxx truckers to the U.S. — but there's nothing for them to protest now 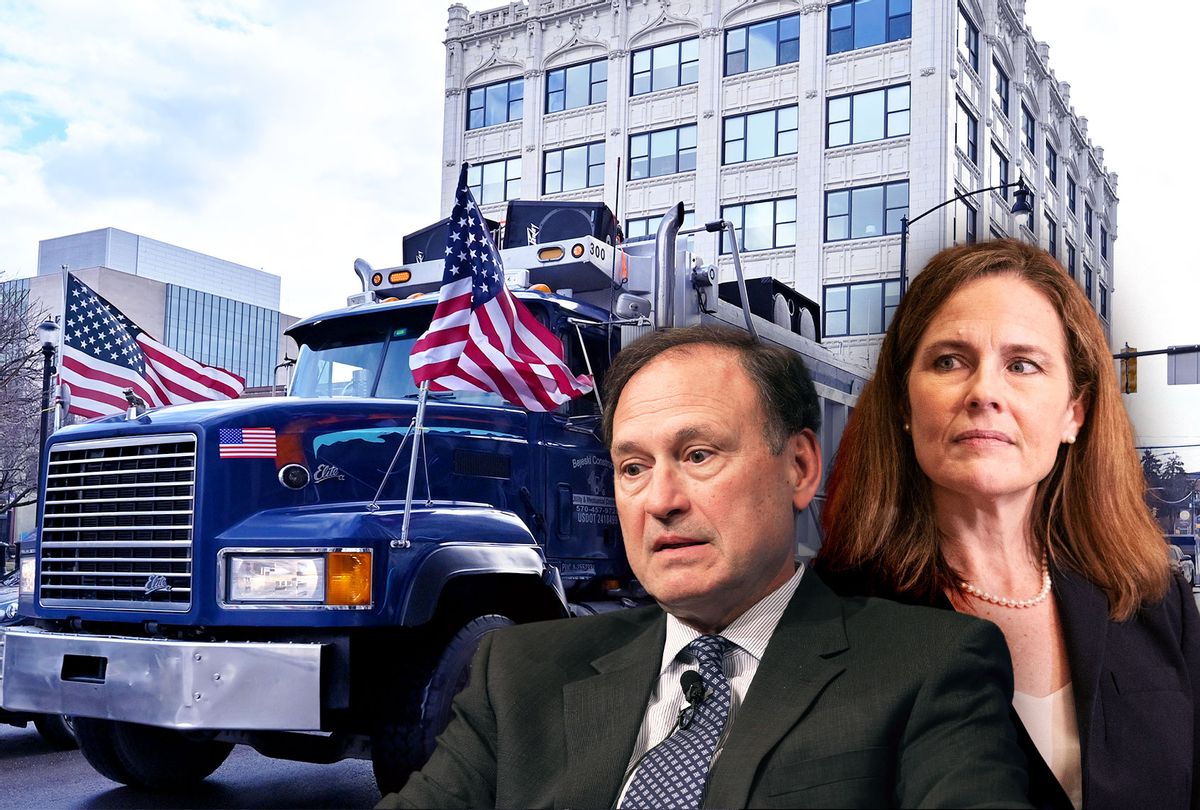 Fox News and Donald Trump desperately wanted to import Canada's tantrum of truckers to the U.S. The Ottawa occupation — which purported to be a protest against COVID-19 mitigation policies, but was mostly just a fascist shindig — didn't just receive endless, breathless coverage praise from the GOP's main propaganda outlet. Nor were conservative media voices intent on importing the "protest" to the U.S. Trump and Sean Hannity were openly fantasizing on-air about anti-vaccine protests turning violent in the U.S. It was going to finally be the national MAGA uprising the right has been unsubtly longing for since the January 6 insurrection failed.

Well, the anti-vaccine truckers have finally come to the U.S. and the whole display has been underwhelming, to say the least. On Tuesday, a "Stage of Freedom" event that was supposed to draw 3,000 anti-vaccine protesters only saw 12 show up. Another, larger protest may happen on Saturday, as groups of truckers from around the country drive to D.C. under the alternately named "Freedom Convoy" or "People's Convoy." These convoys are certainly drawing out some supporters as they drive through red state America. But notably, Fox News is mostly ignoring the truckers winding their way to D.C. now. And the reason is not mysterious: No one can explain what the hell they're supposed to be protesting.

The press release for the "People's Convoy" declares "it is now time to re-open the country" and "Americans need to get back to work in a free and unrestricted manner." Very high-minded rhetoric! But they can't explain who, exactly, is stopping them.

Despite the popularity of "Let's Go Brandon" signs at the protests, it certainly isn't President Joe Biden. In his State of the Union address Tuesday, Biden declared "We have the tools we need" to "end the shutdown of schools and businesses." And frankly, even his rhetoric is outdated, as most businesses and schools have been open, but for a few temporary and sporadic snow day-style closures in January. Last week, the CDC revised its mask guidelines so that 70% of the country is not asked to mask up any longer. On Wednesday, the White House released its formal plan that codified Biden's remarks, creating a blueprint for the end of most of the lingering restrictions. The mask mandate for planes and trains is likely going to end on March 18. Even the biggest and bluest cities in the country are following Biden's lead and winding down most mask mandates.

What is most ridiculous is all the whining about vaccine mandates, which, in a saner society, would be the restriction that lingers long after the mask rules and school closures have ended. But most Americans simply aren't beholden to anything resembling a vaccine mandate. Only 36% of Americans work for an employer that requires vaccination. Having your shots isn't required to get on a plane or a train or to enter public buildings in most of the country. Even cities like Philadelphia and New York City, which had vaccine mandates for some public spaces, are dropping them.

The petering out of vaccine requirements can, in turn, be laid at the feet of the Supreme Court. Biden had signed an executive order requiring large employers to implement vaccine mandates, but the conservatives who dominate the court overruled the order in January, even though it clearly adhered to the letter of the law regarding federal authority. All, mind you, in service of a supposedly sacred "right" not to be vaccinated that Republicans only discovered around the time that Biden became president.

RELATED: The radical right's takeover of the Supreme Court is complete

Here's the irony: In their mad dash to stick it to Biden, the Supreme Court may have deprived Republicans of their most potent political weapon going into the 2022 midterms — frustration with pandemic restrictions.

For the past year, once vaccines started to become more widely available, the GOP's strategy to undermine Biden became clear: Convince their followers to refuse vaccination, needlessly prolong the pandemic, and then campaign in the fall of 2022 by appealing to the public's weariness of mask mandates, school closures and other COVID-19 restrictions. This is a classic GOP strategy of undermining a Democratic president and then blaming him for the problems they cause.

In theory, the Supreme Court throwing out vaccine requirements would support this strategy by keeping vaccination rates low and therefore keeping transmission rates high. What the conservatives justices didn't count on, however, was that this decision would be the beginning of the end of pandemic politics. It's not just that the omicron variant tore through the population so fast that it led to the rapid decline in cases. It also signaled the end of much of the political interest among Democratic voters to keep fighting the right on this front, since the court is clearly just going to vacate any further efforts.

It helps that vaccines don't just reduce the chances of catching COVID-19 — they dramatically reduce the chance of getting much more than a standard cold from it. The research shows that vaccinated people are 14 times less likely to die of COVID-19 and boosted people are 97 times less likely to die. Most people are fairly well protected, and have lost interest in protecting those who refuse vaccines.

The anti-vaccine movement in the U.S. is a victim of its own success. The whole point of propping up the bad faith arguments against vaccine mandates was to put a gloss of "freedom" and "liberty" on what was clearly an effort to keep the country hamstrung by cumbersome pandemic protocols. The hope was that voters who were sick of masks and school closures would take it out on Democrats in November.

Unfortunately for Republicans, those restrictions are disappearing, in no small part thanks to the Supreme Court. It's hard to have a backlash when the thing you're supposed to be outraged about isn't happening. To sum up how a lot of Democrats, if not most, are feeling these days: If Republicans want so badly to get COVID-19, let them. Everyone else, to use the standard trucker lingo, is moving on.