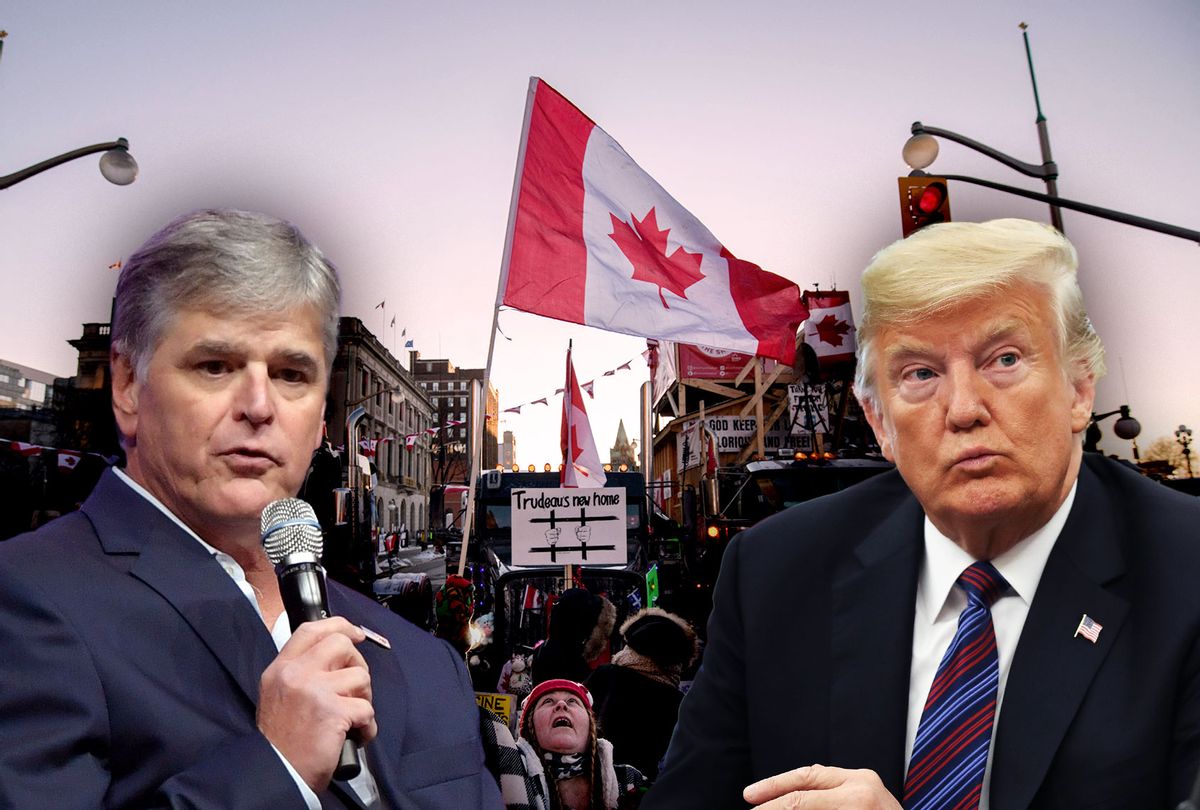 Sean Hannity, Donald Trump and demonstrators during a protest by truck drivers over pandemic health rules and the Trudeau government, outside the parliament of Canada in Ottawa on February 15, 2022. (Photo illustration by Salon/Getty Images)
--

It was already thin and porous — the line between Republican members of Congress and the domestic terrorists who stormed the Capitol at Donald Trump's bidding on January 6 — but it only got more so this week, when an anti-vaccine activist embraced by Sen. Ron Johnson of Wisconsin went on "The Alex Jones Show" and unsubtly encouraged the enormous, conspiracy theory-addicted audience to commit acts of violence.

"The job of soldiers during war is to arrest and/or kill the enemy," ranted Ben Marble, who Johnson hosted at an anti-vaccine panel in the Russell Senate Office Building on January 24. "Well, first you have to know who the enemy is. And I'm clearly stating who the enemy is. The enemy is Nazi Klaus Schwab, Bill Gates of Hell, George Sore-ass, Dr. Death Fauci, Dementia Joe, Kamala Whore-is."

Marble is technically a medical doctor, but his main job these days appears to be grifting gullible Trump supporters by telling them he's got some formula to stay safe from Covid-19 without being vaccinated. (He does not.) At Johnson's panel of anti-vaxxers, Marble was invited to hype his website, where he peddles fake treatments like ivermectin to people foolish enough to reject the vaccine.

RELATED: Insurrection by other means: The far right is using anti-vax sentiment to radicalize Republicans

The panel was just one of the more recent attempts by Johnson to push  "inject bleach" levels of fake Covid-19 cures. But by putting a veneer of respectability on creeps like Marble, Johnson also, wittingly or not, is contributing to an increasingly dangerous atmosphere of political violence and domestic terrorism. And this is not an outlier, unfortunately. The anti-vaccination movement is increasingly being used by fascists and other authoritarian groups to radicalize everyday Republican voters. Enthusiasm for violence, unfortunately, goes hand-in-hand with far-right ideologies, for a very simple reason: They know they can't get their way through peaceable means. The majority of the public rejects these views, and so the only real way to win, for the far-right, is through force.

Unsurprisingly, then, the right-wing media — and Trump himself — are exploiting this Canadian trucker situation in Ottawa to inject more fantasies of political violence into the heads of their followers.

The protest is ostensibly about vaccine mandates, but really, it's much broader than that, as Vice journalist Mack Lamoureux explained on the "Fever Dreams" podcast. In sum, it's an anti-democracy movement of people who believe a tiny fringe of far-right extremists should rule instead of the duly elected government. Basically, it's the same mentality that drove the January 6 insurrection — which is why Trump and his media allies see so much potential in using it to stoke more violence like the kind Trump instigated at the Capitol.

On Fox News, they've been doing everything they can to encourage the Ottawa trucker situation to happen in the U.S., because they're impressed by the way this unpopular fringe has held the city hostage. Trump joined in over the weekend in an interview on the network, saying, "you can push people so far and our country is a tinderbox too, don't kid yourself." He repeated the "tinderbox" language while fantasizing about the trucker blockade being replicated in the U.S., saying, "our country, I think, is far more of a tinderbox than Canada." On his Fox News show, Sean Hannity engaged in the same violent fantasizing, threatening that if Canadian Prime Minister Justin Trudeau sends law enforcement "in there directly to confront them, I can't guarantee that at that point people won't defend themselves."

RELATED: The Bundy takeover is now complete: How the GOP has embraced pro-terrorist politics

Both Trump and Hannity are more clever than Marble is at adopting the passive language, so they can pretend that they're not pushing violence, when that is, in fact, what they're doing. This is a standard authoritarian rhetorical tactic: Pretending to be "peaceful" by trawling for a fight, and then pretending your violence is mere "self-defense." Of course, there is nothing "peaceful" about what Hannity and Trump are envisioning here. The truckers have been blocking traffic, honking horns at all hours of the night, and making life a living hell for the residents of Ottawa. That's an act of aggression, and if they are arrested for it, they are not actually entitled to shoot police in "self-defense." Certainly, actual practitioners of non-violent protest know that, if you get arrested for breaking the law, the point is to go peacefully to jail.

Again, we see the same passive construction ("it's coming for them") paired with a violence-justifying conspiracy theory ("reeducation camps"). That allows these propagandists to float the idea of violence while pretending not to have responsibility for it, even as they construct the justifications for why it's necessary.

Unsurprisingly, Tucker Carlson also joined in on his Fox News show in his usual way: Pushing baseless conspiracy theories. On Tuesday, Carlson floated a claim that "state intelligence agencies" are behind the hacking of a site that the truckers are using to fund themselves. (Something the site itself does not claim.) And on Wednesday, Carlson escalated, accusing the Washington Post of "incitement to violence" for a piece revealing the identities of Americans who have been giving the truckers money.

This sort of rhetoric, like Hannity and Trump's, pretends at violence but is actually the opposite. By framing the truckers and their supporters as victims of "violence," Carlson is propping up a justification of actual violence as mere "self-defense."

So far, there hasn't been much violence at the Ottawa blockade, but that doesn't mean the threat isn't very real. Canadian law enforcement exposed a plot from some of the protesters this week "to use force against the police if any attempts were made to disrupt the blockade."

Two of the three men arrested in Coutts and charged with conspiracy to commit murder are connected to a shit-posting, far-right, anti-government community.

And it's absolutely true that, if Fox News succeeds in spreading this Canadian situation to the U.S., it will likely get violent. Not because of Trump's passive language about the U.S. being a "tinderbox," however, but because Trump and his allies have spent years nurturing the growth of far-right extremist groups like the Proud Boys and Oathkeepers, who were a big part of organizing the Capitol storming of January 6.

So far, the anti-vaccination movement in the U.S. has been more focused on dying than killing. Indeed, unvaccinated people are 97 times more likely to die of COVID-19 than those who are vaccinated and boosted. Still, the fact that so many Americans are willing to risk death in order to stick it to President Joe Biden is alarming. People who are willing to die for a cause, however idiotic, are often willing to do violence for it. We saw that on January 6. And the people who stoked the violence that day are now using anti-vaccine rhetoric to stoke it even further.