Don't bleach it away: Remembering the day Trump turned the GOP into a death cult 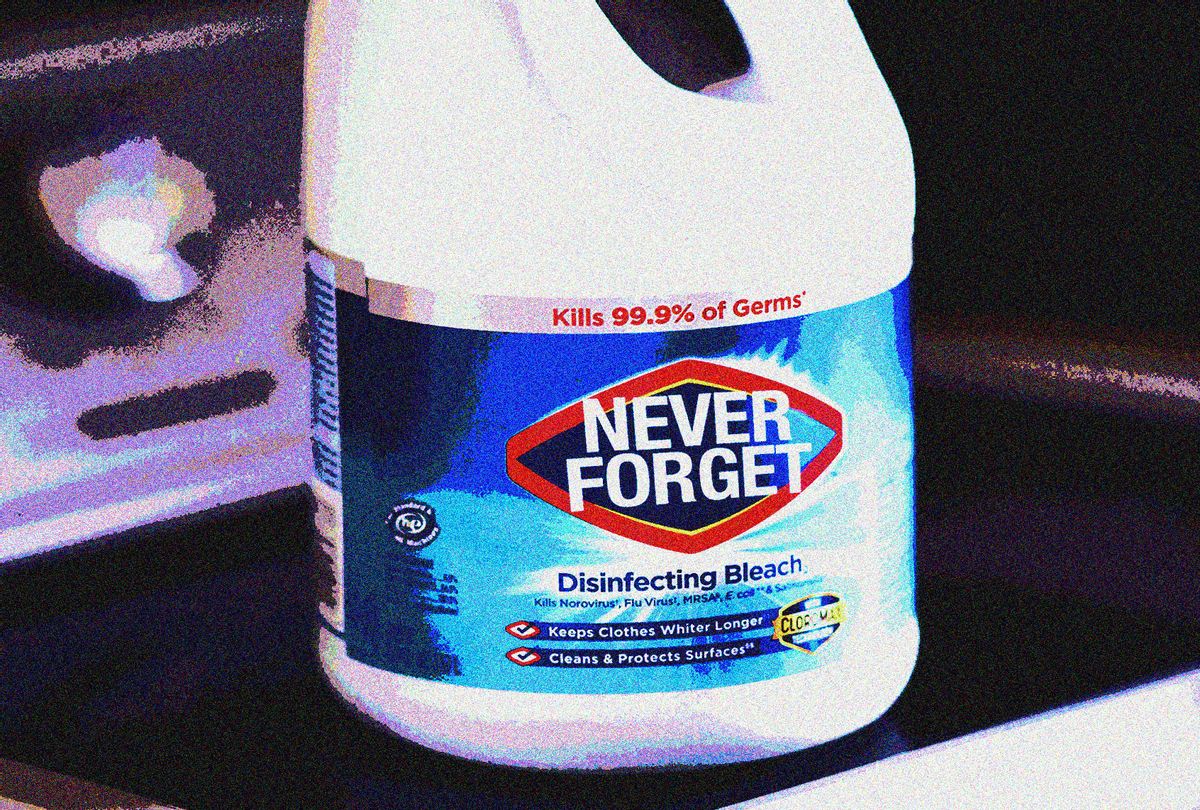 April 23: It's Shakespeare's birthday. It's the day that Beyoncé released her instant 2016 classic "Lemonade." It's, uh, the day that Anne Stuart was crowned queen of England. And — much to the chagrin of those who care about things like facts, human decency, and not letting hundreds of thousands of people die to serve the pathetic ego of a sociopathic narcissist — it is also the anniversary of the day that Donald Trump, technically elected president of the United States of America, stood up on national television and suggested he had found the cure for coronavirus that those silly doctors hadn't considered: bleach injections.

And before a sea of conservatives start saying "nuh-uh" and "fake news," let's go ahead and roll the tape:

I see disinfectant, where it knocks it out in a minute, one minute, and is there a way we can do something like that by injection inside, or almost a cleaning. Because you see it gets in the lungs and it does a tremendous number on the lungs, so it'd be interesting to check that.

Standing at a podium in the White House briefing room, Trump also insisted — and this always stuck with me because he was just so sure that he had figured out something that medical science had overlooked — "I'm like a person who has a good you-know-what" while pointing to his head. He also threw out the idea of cracking people open and letting sunlight clean them out.

The moment wasn't just the end of any remaining dignity for the U.S. It was the end of the last remaining hope beating in liberal hearts that there was anything that Trump could say or do that would cause his followers to un-cleave themselves from the bosom heaving under that weirdly overlong tie. No, on the contrary, it was proof that the worst Trump acted, the more his supporters clung to him, determined to stick it to the liberals who kept laughing at them for voting for the wannabe fascist reality TV "billionaire" in the first place.

For the one-year anniversary of what will likely be remembered as the stupidest day in American politics, Politico did a very Politico thing and published an "inside baseball" piece allowing anonymous and self-congratulatory Trump aides to claim that they did try to stop him before he unleashed the ignorance kraken. Naturally, not a one is asked the deeper question of why they would even work for a man who was a known threat to do something so thunderously stupid.

More important, however, than the self-serving narratives of people with more ambition than sense is what this moment really ended up foretelling about the next year. No doubt it was pretty funny, this new level of cretinism reached by this known moron whose unearned privileges allowed him to fail upwards right into the White House. But Trump's toxic combination of stupidity wed to the self-assurance of a terminal narcissist also ended up being the catalyst for months of mounting trauma inflicted on a nation where most voters really had done their level best to elect Hillary Clinton instead.

From the very beginning of the pandemic, Trump's narcissism led him to believe that he not only knew better than all the scientists of the world combined but that they were probably only saying COVID-19 was a problem as some sort of plot against him. By giving him a daily press briefing at which he could rant mindlessly at cameras every day, his staff was able to trick him, for a time, into reluctantly pretending to take the virus seriously. Still, he was able to communicate to his followers — by refusing to wear a mask, by acting like a pouty child, and by encouraging anti-lockdown protests — his true feelings about the virus, and about his irritation at scientists for thinking they know more than him just because they read and study.

The results were deadly. Refusal to take the pandemic seriously became a badge of honor among Republicans, leading to red states falling short on quarantine measures and conservatives rejecting even the most basic precautions. Trump encouraged this by holding maskless, crowded rallies. The death toll quickly mounted, spiraling way past the early worst estimates of 100,000 or 200,000 to where we are today, with over 570,000 dead on this grim anniversary.

Trump's leadership in framing belligerent ignorance as a right-wing virtue is still wreaking havoc. Over 40% of Republicans refuse to get vaccinated, ready to see this rejection of science until the very end. Even just this week, Trump's former HUD Secretary, Ben Carson, was still hawking hydroxychloroquine, one of the many failed "miracle cures" that Trump hyped in his efforts to deny that scientists know what they're talking about.

The bleach presser crystallized another important aspect of Trump's personality that turned out to be not funny at all: His stalwart belief that there's always some easy way out. Trump was a man who spent his whole life being bailed out of trouble by rich and powerful people, but the pandemic was not something that could be made to disappear with a quick phone call to Roy Cohn or a check written to buy someone's silence. Still, Trump did not abandon his hope that there must be a way to make this whole pandemic business go away, and, in his grasping for such a thing, he landed on "disinfectant injections".

Unfortunately, that same attitude of Trump's came into play after he lost the 2020 election. His failed coup that played out over the next two and a half months was driven by his hunt to find some legal trick, some cheat code available only to him, that would allow him to sail in and seize the lost election from Biden. And when that didn't pan out, as we all saw, he instead sent an unruly mob to storm the Capitol and try to steal it for him.

On the left, the bleach-injector moment really was the death knell for the liberal faith that conservative minds can be changed with a steady application of facts and reason. That faith had been eroding for years, in the face of research exposing the endless capacity of conservatives to rationalize their worst impulses. But the plain idiocy of the moment and the widespread coverage it got made it indisputable. Conservatives will stand by anything — no matter how blatantly moronic — in the name of "owning the liberals."

If anything, Trump's stupidity in that moment only made the situation worse. Liberals laughed at him, and by extension, anyone dumb enough to vote for him. That made conservatives defensive and even more determined to stick it to the liberals by voting for Trump even harder. Concepts of "good governance" don't stand a chance against the childish hyper-defensiveness of the average GOP voter.

So yes, it was funny. I still laugh when thinking of that moron pointing at his head and saying, "I'm like a person who has a good you-know-what." But everything that's happened in the past year — the half a million dead, the violence against protesters at the hands of cops and right-wing vigilantes, the racist violence, and, of course, the attempted coup — has been a sobering reminder that the same ugly urges that caused conservatives to defend Dr. Bleach-Injector also caused them to not care how many people this minority of Americans hurts or kills in their quest for cultural and political dominance. Even David Brooks is starting to get it:

What's happening can only be called a venomous panic attack. Since the election, large swathes of the Trumpian right have decided America is facing a crisis like never before and they are the small army of warriors fighting with Alamo-level desperation to ensure the survival of the country as they conceive it.

We have a new president, Joe Biden, who takes science seriously and has captained what, despite a few bumps, has been a remarkably successful vaccination effort. But we're barely just beginning to deal with the fallout from having that 43% of Trump loyalist Americans prove that there is nothing that can be said or done that will make them see sense. That's an illness no vaccination can prevent.