Tarot helped me take advice from my mother

Our relationship hasn't always been easy. For a long time, tarot was one more thing I didn't understand about her 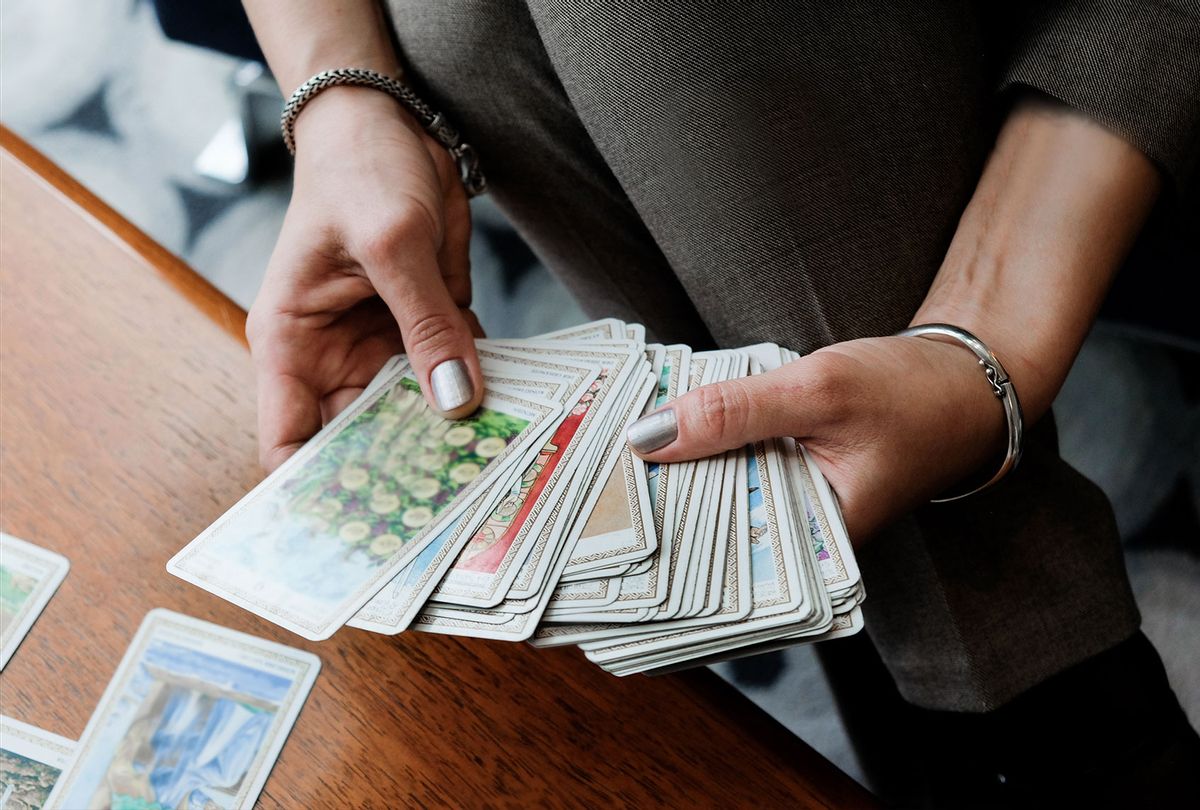 My mom deals out the next three months of my life from a stack of blue cards. She flips over the line of cards one by one revealing five of cups, ace of cups, eight of wands, the Emperor, two of cups, the World upside down, and three of pentacles upside down. She examines the cards, pausing on the upside-down World. Her fingers trace the wreathed oval. She picks it up. "That's what you have to know about the cards," she said. "If it's upside down it doesn't necessarily mean it's negative."

We all have hobbies, habits and routines we guide our lives by. My mom reads tarot cards. She started reading cards about 10 years ago when she was volunteering at a yoga retreat where tarot and astrology were widely used. They made sense to her intuitively because she considers herself a spiritual person.

RELATED: Why business is booming for psychics during the pandemic

My relationship with my mom hasn't always been easy. For the longest time, tarot was one more thing I thought I would never understand about her. Tarot is a mystical guiding system that has been used throughout history for fortune telling. The cards first emerged in Europe in the 15th century and were used simply for card games. The use of tarot cards in divination came into usage during the 1700s and have since been connected to the occult and mysticism around the world. Recently, tarot and astrology have become popular with millennials, along with other New Age spiritual practices. Co-Star, an app that provides users with their astrological charts and daily horoscopes, has gained 5.3 million users since launching in 2017. This rise in popularity may have more to do with the opportunity these pursuits offer for self-evaluation than beliefs grounded in the validity of mystical divination.

When my mother first got into tarot, I kept my distance. I believed there was no realistic explanation for predicting someone's life through a deck of cards. Then one day, during the pandemic, driven half out of boredom and half out of the certainty nothing could be weirder than what we were already living through, I asked my mom to give me a reading. It was startlingly accurate. Over the course of the next year and a half, I asked her for readings on a regular basis. She predicted the outcome of various periods of time in my life and gave me advice based on her readings, which were not only accurate but insightful.

In a tarot reading, the participant asks a question, and the reader will flip over a series of cards, interpreting an answer based on each card's meaning. Usually, I ask for a three-month overview of what is in store for me. My mom examines the cards, pointing out their meanings as she works to build the overarching message in response. After reading the cards and evaluating the relationships they have with each other, she fits the message into the context of my life.

RELATED: What a skeptic learned from consulting psychics — and astrologers, tarot readers, empaths and more

My mom doesn't believe in fortune telling. For her, that's not what tarot cards are about. She uses tarot to offer insight, understanding, new perspectives, or renewed hope on challenges the person she is reading for may be facing. The cards provide a space for deeper self-reflection and give the participant an opportunity to ask questions about situations they are currently struggling with. She says it's like a fun way of doing therapy — instead of talking to a medical professional, you're playing a card game.

For me, it's given me a way to open up to my mom again. When I moved away to college a few years ago, we grew apart. Sometimes we wouldn't talk for a couple of weeks. One time a whole month flew by with no communication. When we did talk, I often felt like she couldn't offer me the support or the advice I needed because my life had taken its own course. During my sophomore year I felt overwhelmed, juggling my role on the school newspaper with sports, work and classes. Over the phone, my mom advised me to drop some unpaid work with the newspaper so I would have more time to manage everything else. I told her that was ridiculous. She didn't understand how important the newspaper was to me. I didn't even consider the possibility of scaling back on anything after that. Her advice made me resistant to examining my problem from a new perspective, even if it could have been helpful, because I felt she didn't understand what my priorities were anymore. So I forged ahead with everything still on my plate. It did not turn out well.

Some of that overwhelming busyness came to a halt during the pandemic, and tarot became a way for us to re-connect while quarantined. Throughout the year, we would convene regularly to puzzle out the future, and I began to develop an understanding of how the cards worked as well as where her interest in them came from. It was reassuring, during a time when nothing seemed normal and predictable about the world, to feel we could see possible outcomes of situations.

When the pandemic cost me my on-campus jobs, I became stressed about paying for school. It was a terrible period of uncertainty; I didn't know how I would pay my upcoming bills. In our tarot readings, my cards kept telling me to be patient — I had pentacles (the money card) coming my way. Even though I'm usually extremely impatient, I took her advice and held off on making impulsive financial decisions. Then I received some educational support grants from my school, which helped take care of my tuition expenses.

As the cards continued to provide me with unsettlingly accurate predictions, I tried to piece together explanations on how they worked. I considered multiple theories. They present situations and patterns you recognize in your life only because you are primed to see them. They could simply be self-fulfilling prophecies. The readings could also be so general they could apply to anyone's life and could fit any situation.

I also considered how the existing relationship I have with my mom could be influencing the readings. She knows more about my life then a stranger would so would have more of an insight into how the readings could apply to my life making the reading seem more accurate. But a lot of what she has read in the cards dealt with situations or relationships she didn't know about.

In the absence of explanations, we seek to fill in the blanks. To cope with uncertainty, we often develop our own stories about the world around us. Like upside-down cards, any situations we face in life can be turned around if we reorient how we think about it.

If my mom had simply told me to be patient about money, I probably wouldn't have taken her advice the same way. Through reading tarot we were able to establish a relationship that took some of the pressure off both of us. I wasn't asking my mom a question; I was asking it from the cards. She wasn't giving me a mother's advice; she was reporting what she had decoded in front of us. The intermediary allowed me to be more accepting of her wisdom and support. It also allowed me to develop a new kind of relationship with my mom — one where we could share the same experience and learn more about each other's lives through this process of self-evaluation.

Despite our personality differences and the challenges we have faced in our relationship, my mother probably knows me better than anyone else in the world. And thanks to tarot, now I know her better, too.