Ukrainian children are suffering amid the invasion. A psychological toll will follow 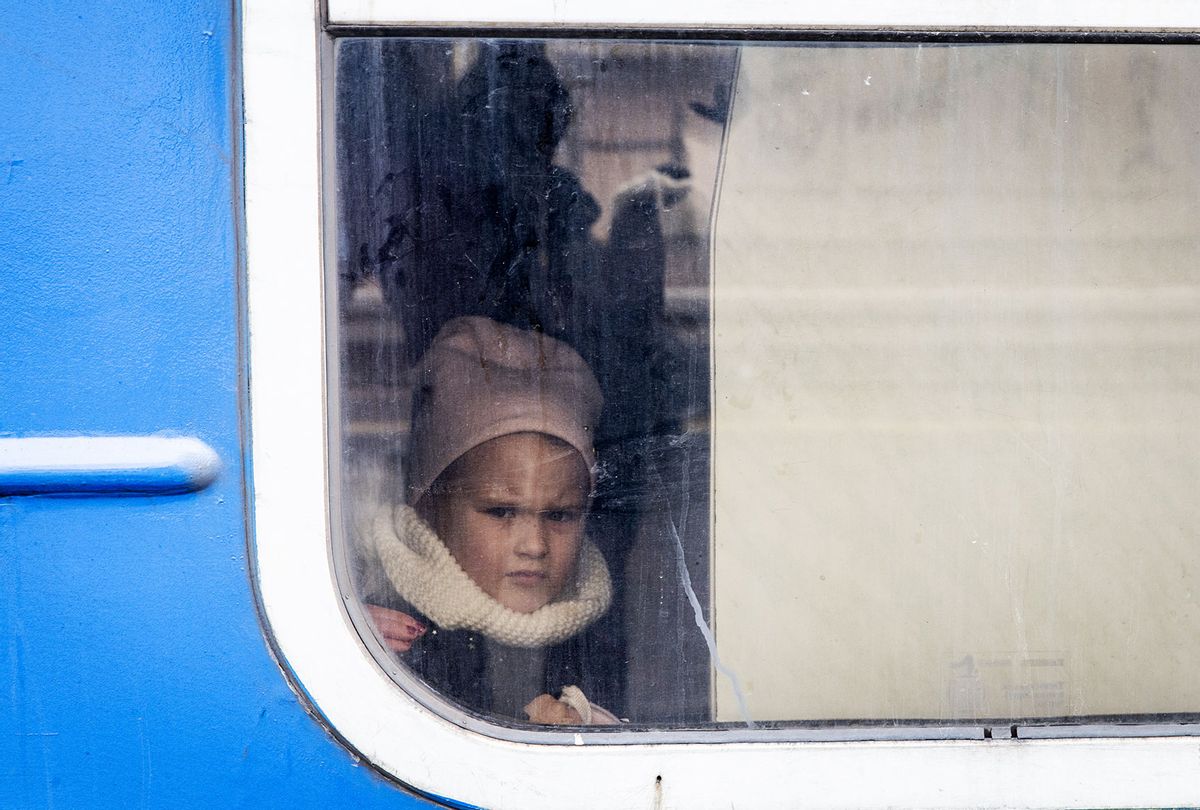 A girl looks out the train window as an evacuation train departs carrying women and children that fled fighting in Bucha and Irpin from Irpin City to Kyiv that was scheduled after heavy fighting overnight forced many to leave their homes on March 04, 2022 in Irpin, Ukraine. Russia continues assault on Ukraine's major cities, including the capital Kyiv, a week after launching a large-scale invasion of the country. (Chris McGrath/Getty Images)
--

As of Wednesday, reporting says that 14 Ukrainian children have been killed and 116 have been injured due to the Russian invasion. This is after only six days of aggression.

Over 10 million children under the age of 19 live in Ukraine. With Russian tanks and armies speeding across the country, millions of children are being exposed to the brutal and grim realities of war. They are facing down missiles, bombs, tanks, ground troops, destroyed homes, bloodied people, and frenetic attempts at evacuation. Their parents, siblings, grandparents, friends, and neighbors are all at risk of being harmed or killed. Some have been killed already. Children themselves will be killed at an alarming rate, whether intentionally or not.

Research tells us that children's direct exposure to the trauma of war leads to internalizing psychiatric disorders, such as major depression, PTSD, panic attacks, separation anxiety, and more. After 9/11, for example, 15% of New York City school children surveyed developed symptoms of agoraphobia, 12% developed separation anxiety, 10% developed generalized anxiety disorder, and 9% developed panic attacks. Externalizing psychiatric disorders, such as substance abuse and oppositional defiant disorder, are also seen in children who are directly exposed to war. Most concerning, exposure to war increases a child's risk for both psychiatric and medical problems in adult life.

We know that war can annihilate a child's parents, family, and community. Parents will be injured or killed. Families will be torn apart. Schools and health care facilities will be decimated. Hundreds of thousands of refugees will be fleeing to nearby countries. Children's natural support systems—parents, extended family members, friends, schools, churches — will be destroyed. The result will be scared, lonely, confused children whose lives will be changed negatively forever.

All civilized countries in the world must band together to stop this war as quickly as possible for the sake of the Ukrainian children. Their safety and preservation must be a top priority. A protracted war for purely political and expansionist reasons is anti-human and anti-children in its essence. And the most vulnerable group of all — children — will pay the highest psychological price.

The devastating effects of war call for a multilayered approach to supporting communities, families, and individuals. Once a cease fire is in place, the first interventions should target communities to promote safety, connectedness, and hope. Priority should be given to reuniting families and restoring infrastructure. Schools should have emergency plans. Health care clinics must be up and running. Churches need to be open.

The next step should be community-wide screening to identify children and families at high risk for psychiatric disturbance. This screening is critical since many adults often have difficulty recognizing children in distress. Screenings can be delivered in clinic or school settings.

Finally, children and families who manifest psychiatric symptoms will need mental health care. While research supports the use of psychotherapy, there is little specific data on the use of medications for psychiatric disorders associated with war-related trauma.

The American Psychological Association and the American Psychiatric Association have taken a stand as to the extreme harmfulness of this outrageous war on all Ukrainian children and their families. Have all other mental health organizations issued similar statements? They must do so.

The faster this war stops, the quicker these children and their families can resume some semblance of their pre-war lives. With each passing day, more and more of the children will be put in harm's way and the life-changing consequences of their trauma will be unavoidable.

All psychologists and other mental health professionals should speak out about the ongoing atrocities in Ukraine. It is our responsibility individually and collectively to make a difference. We cannot turn a blind eye. We cannot stick our heads in the sand. We cannot just shrug our shoulders.

Silence is not an option.

Read more on the situation in Ukraine: