A "Freedom Convoy" we can all support: Send the truckers to Russia!

It's a win-win: Send the faux-truckers, insurrectionists and COVID fanatics to the motherland of their true Daddy 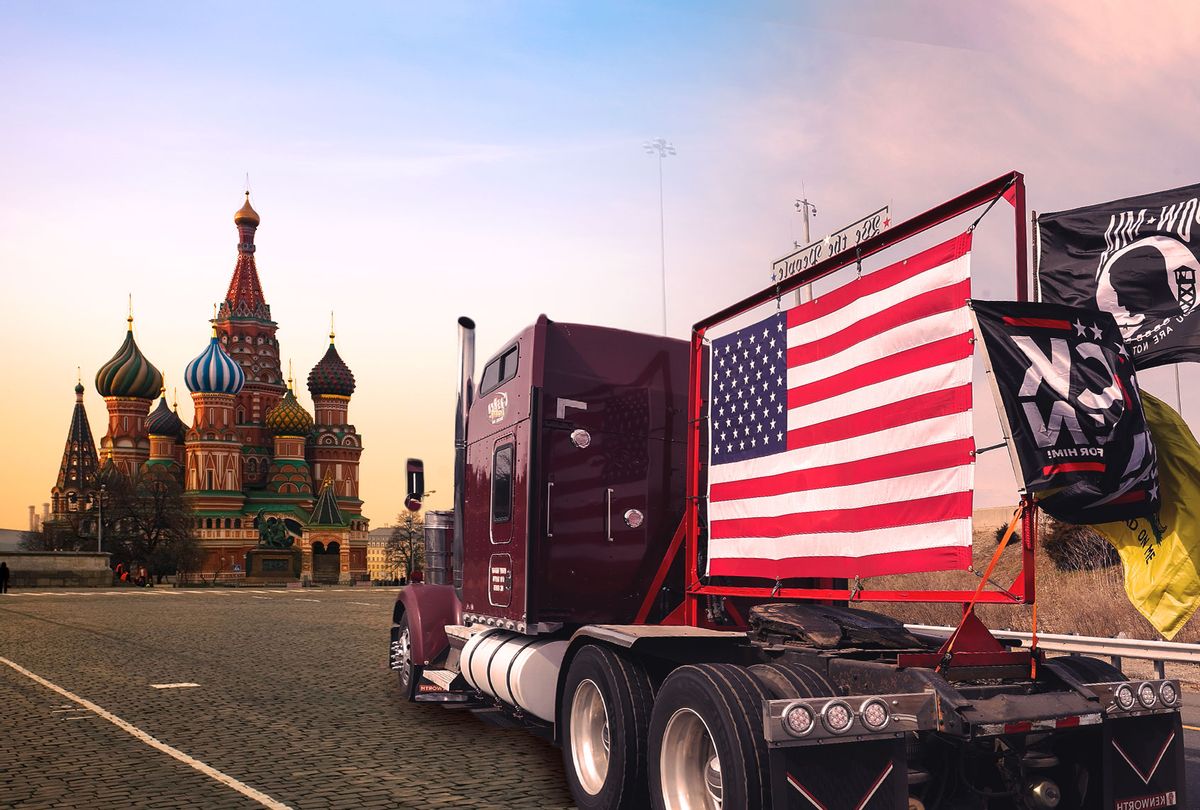 In any negotiation to stop Vladimir Putin's unprovoked terror war against the Ukrainian people, may we add one small demand — that he open his borders to anti-Americans here at home?

I think he would be good with that.

I know I would.

I'm talking about the gun-toting, flagpole­-wielding insurrectionists, those faux-truckers with their faux demands for faux freedom from wearing masks they weren't wearing anyway — at least not over their noses — and all those folks who want to push their religious beliefs or unbelievably idiotic conspiracy theories on the rest of us, the reasonably educated "elite."

Anyone who (at least until very recently) has openly praised Putin as being a stronger leader than their own president.

A jury just reached the first conviction of a Jan. 6 insurrectionist, and he will be sentenced in June. Given that there are something like 750 cases coming up for the Justice Department to deal with, some have suggested that the judge in that case will hand out a severe sentence to encourage others to make a plea deal.

It's nice to see Republican support for Ukraine's struggle against Russia's war — after a fair amount of initial hedging — and polls show a vast majority of Americans say they are willing to deal with increased gas prices to support the overall effort. But there is no doubt that Republican leadership will start blaming President Biden for rising gas prices the moment they think they can get away with it — oh wait, they never stopped—as if he, or any president, has any control over the price at the pump.

But to all true-red Putin fanboys, like Fox News "personality" Tucker Carlson, and those who, like him, see in Russia or Hungary a model for our future, I say: Go. Democracy makes you feel very uncomfortable, like reading some generally beloved literature. And lots of science. And a good deal of history. And, now, gender studies.

The problem with you is that your oft-stated desire to "be free" is mostly about imposing your religious beliefs on others and curtailing your fellow citizens' freedom to life, liberty and the pursuit of their own happiness — including the liberty and happiness one feels as a citizen in casting a ballot, exercising democratic responsibility and feeling that fundamental sense of agency in the world.

Your idea of freedom is that everyone is free to think like you do. (How Putin-esque!) Are your antidemocratic impulses a good fit for living in the increasingly diverse United States of America in the 21st century? Let me put it in a way you'll comprehend: Nyet.

Perhaps the AARP magazine should include Russian Federation states and allied countries in upcoming features on the best places to retire. You know, the AARP staff could provide additional categories for aging Americans with pro-Putin leanings to consider. Along with the standard categories of taxes, recreation and health care, they could include how adeptly officials in the region suppress protesters, women and journalists, or how helpful they are to folks who want to launder money in the West. Some wealthy Americans might choose to retire to, say, Belarus or Kyrgyzstan instead of Florida (and not go through the current endless hassle of turning Florida into Belarus or Kyrgyzstan). For less affluent Russia lovers, "Borscht-ing on a Budget" and "Surviving — and Thriving — in a Siberian Winter!" are a couple of feature story ideas that immediately come to mind.

Here at home, we would also love to be free of your endless trolling — which is an impulse, come to think of it, that could stand you in good stead in the Russian Federation or its allied states. As would that strong desire you seem to have lately to suppress the vote, rat on your neighbors and turn them in to the authorities (which, OK, can sometimes backfire).

You would have the freedom to live in a land where books don't need to be banned or burned, because they simply aren't published in the first place; where LGBTQ rights are unknown, partly because such acronyms, as well as human rights in general, remain unworkable in Russian; and where women and people of color know better than to raise their voices as full human beings.

We can save the nation, and the union, while not breaking it up by states or counties — or ceding our reddest counties to the protectorate of Putin's lame alt-NATO, the CSTO. You and your fellow Putin admirers, along with evangelicals (who don't comprehend the First Amendment), gun fetishists (who don't comprehend the Second Amendment) and white supremacists (who don't understand the 14th, the 15th and — well, any number of amendments, as well as the life and message of Jesus) can live in a country much better suited to your zealotry and fervent beliefs.

As Christian historian Jemar Tisby, author of the bestselling "The Color of Compromise" and "How to Fight Racism," has extensively discussed, American white Christians being hellbent on white nationalism is nothing new. Writer, farmer and philosopher Wendell Berry called our deep reluctance to acknowledge our racist history America's hidden wound, and the right is very busy now further covering it up.

But fear not, Republicans — Putin has your back. His form of Christianity is said to be more about power and ideology than theology. And many Americans on the right, who have been encouraged to fear an "elite" left and to hate their political opponents for advocating diversity and inclusion in our pluralistic, multicultural democracy, greatly admire any "strongman" who might make it all go away, with a big assist from a like-minded Supreme Court.

The horrific human scenes of devastation we are witnessing from cellphone and amateur video coming out of Ukraine may be momentarily silencing most Putin aficionados and apologists in the United States, but don't think for a moment that they don't still love him.

Watching courageous Ukrainians pushing back against the little Russian tyrant, with their lives and homeland on the line, and an empathic and competent American president methodically working with the leaders of a strengthened NATO against him, should make us appreciate the strength inherent in the American promise — which is painfully slow, yes, but still a promise, a worthy aspiration — of greater justice for all, as well as the creative energy that comes from our blessed diversity of thought and cultures.

I want to feel as proud of my homeland as the Ukrainians obviously do theirs.

That trucker convoy was an AstroTurf bogus protest, but a "freedom convoy" of insurrectionists and QAnoners and authoritarian-loving Putin-stooges in Congress and the media packing up and heading straight out of this country would be the real thing.

Let's forge a moment of rare bipartisan consensus and make your freedom convoy — and ours — a reality.

Read more on the Ukraine conflict and how we got here: