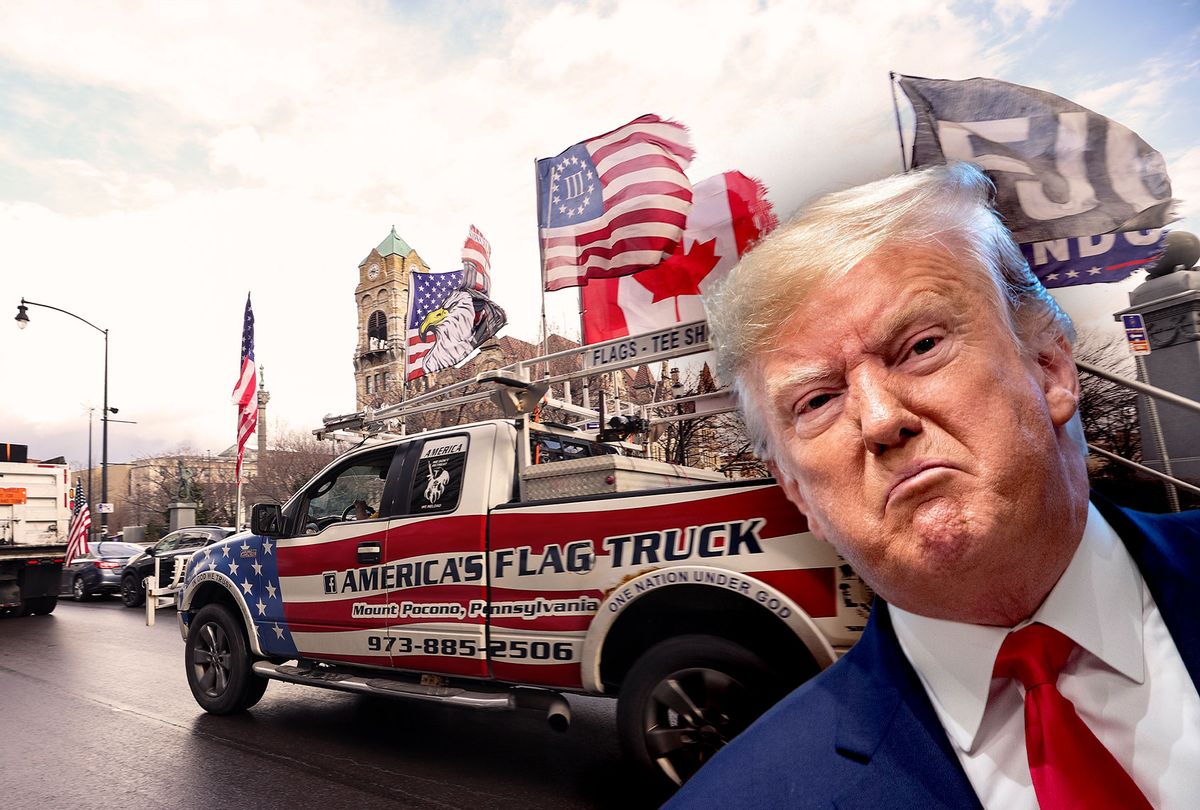 Donald Trump | A group of truck convoy headed to Washington D.C. to from Scranton, Pennsylvania, United States on February 23, 2022 to protest vaccination mandates and in solidarity for Canada. (Photo illustration by Salon/Getty Images)
--

Fox News willed the "People's Convoy" into being. For weeks, the network hyped the "trucker" protest in the Canadian capital of Ottawa, spinning it as a grassroots uprising of ordinary Canadians angry about vaccine mandates and other Covid-19 mitigation policies. In reality, however, it was organized by far-right activists — almost none of whom are actually truckers — whose goal was to exploit pandemic anxieties to recruit more people towards a fascist cause. And that is, of course, why Fox News loved it. And that's why the network spent weeks not only glamorizing the occupation that made life hell in the city for weeks but openly begging their viewers to throw together their own version in the U.S. —except with more violence.

It's a testament to the network's power over its audience that soon there was a "People's Convoy" in the U.S., even though there aren't many vaccine or mask mandates for right-wingers to protest. A growing group of angry right-wingers, led by some big rig trucks, took road trips across the country, in theory to converge on D.C. to send this anti-mandate message. Without actual mandates to protest, however, it swiftly became clear that the real purpose of the convoy was to troll liberals and get attention. Quite literally, organizers declared their intention to be a "huge pain" to the residents of D.C., who have long been demonized in barely coded racist terms in the right-wing press.

Ultimately, however, the "People's Convoy" didn't have the courage of their flimsy convictions.

Despite massive amounts of self-aggrandizing hype and a fairly large, nearly all-white rally in Hagerstown, Maryland on Friday, the trolling truckers chickened out at the last minute when it came to actually entering Washington D.C. Instead, they're staying inside their trucks and circling around the Beltway before hiding out again in Hagerstown. The whole thing couldn't be a funnier symbol of the modern right, which likes to talk a big game about how tough they are, but in the end, are such scaredy cats that even being out of their cars in a bona fide city frightens them.

RELATED: Trucker tantrum fizzles out: How the Supreme Court's anti-vaccine overreach backfired on the GOP

This debacle isn't even the only example from over the weekend of how much right-wing politics is built on fakery and empty promises, all of which exploit the prime directive of the modern American conservative: irritate liberals.

On Saturday, Ruby Cramer of Politico published a devastating look at TRUTH Social, Donald Trump's new Twitter knock-off. The app's supposed appeal is that Trump's team won't be as hostile to spreading Covid disinformation and inciting right-wing violence. This, in turn, means Trump can tweet on it — or "truth" on it, to use their parlance, showing that the actual investment into this app is so meager that they didn't even bother to find a verb of their own. But, as I argued last summer, that's exactly why these right-wing social media silos are doomed to irrelevance — precisely because they don't have liberals on them.

When the main motive is triggering the liberals, you need some liberals around to trigger. If Trump supporters want to experience a bunch of racists saying racist stuff to each other, happy hour with their friends is more fun and also has booze. And sure enough, Cramer reports that "inside the app, digital tumbleweeds blew through my feed."

Part of it is due to incompetence, deliberate or otherwise. The app is slow and buggy and people who try to sign up find that there's a massive backlog in account verifications. (Google Trends show the top searches regarding the app are "when will truth social work" and "truth social waitlist number not changing.") But even if someone manages to get on, all they find is the usual Republican trolls in Congress — like Reps. Matt Gaetz of Florida and Marjorie Taylor Greene of Georgia — simply copy-pasting their messages from Twitter. Otherwise, Cramer reports, "there isn't much happening on the site."

So I ask: If a troll is trolling no one, can it really be considered trolling?

To be certain, it's not entirely clear that TRUTH Social is actually meant to be successful. Reports over the fall showed that the company, which is run by Trump lackey and former California congressman Devin Nunes, barely had a business plan. It looked very much like so many of Trump's other ventures, which involve a lot of hype to attract investment money and then not a lot of delivery, leaving Trump richer and his investors feeling defrauded. The company needs to produce something app-shaped, to protect itself from lawsuits and criminal charges of deliberately defrauding investors. But it doesn't actually need to work.

Similar questions linger over the People's Convoy, which reportedly raised over a million dollars and is still fundraising now, even as attendees are starting the process of slinking away and pretending none of this ever happened. Sure enough, the Washington Post reported on Saturday that the organization that is taking in the money, American Foundation for Civil Liberties and Freedom, is run by a woman who pled guilty to felony fraud and exploitation in 2020. Currently, her arrest is sought "by authorities who allege she violated the terms of her community supervision."

Right-wing politics in America has always been half ideological commitment and half about separating fools — almost always fellow conservatives — from their money. But in the Trump era, this ugly grifter streak on the right has become more pronounced. Part of it is because their leader, Trump, has built his entire career as a con man and a criminal, making it easier for his followers to be more blatant about their own fraudulent intentions. Part of it is because the right is increasingly devoid of any values or beliefs outside of simply hating liberals and whining. The result is empty and fake protests like the "People's Convoy" or Trump's empty and fake social media network.

The problem, unfortunately, is that the desire to trigger liberals is seemingly endless and getting harder for the right to satisfy.

This seemingly insatiable appetite on the right is a big part of the reason why figures like Tucker Carlson of Fox News or congressional newcomer Marjorie Taylor Greene are finding so much success by upping the ante with overt white nationalism and buddying up to Holocaust denialists. No doubt their racism is sincere, but their popularity on the right is deeply rooted in the perception that they are willing to do or say anything to offend the left. The failure of the "People's Convoy" suggests that anti-vaccine rhetoric is running out of gas as a way to troll the left. What they will move on to get that same high is, unfortunately, likely to be even more repugnant.