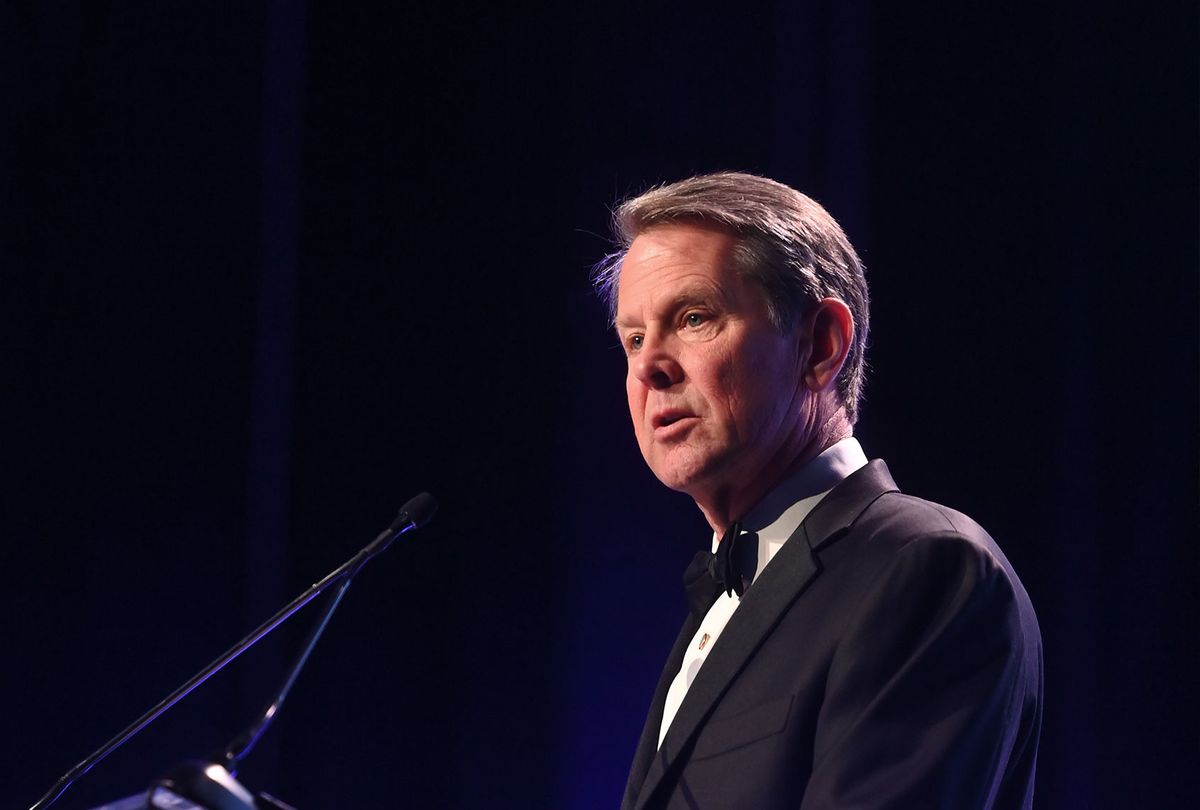 Georgia Republicans last year passed Senate Bill 202, a far-ranging 98-page law that restricted ballot access and opened the door to potential election subversion by the Republican-led state legislature, leading to corporate boycotts and comparisons to Jim Crow-era voter suppression laws. The state House voted down party lines on Tuesday to approve House Bill 1464, yet another 40-page voting omnibus bill  introduced just hours before it advanced through a committee vote last week. That came despite Gov. Brian Kemp's vow that the state would not implement any new voting laws after last year's bill.

The new legislation would, among other things, empower the Georgia Bureau of Investigation to investigate election issues, restrict outside funding to election offices and open voters' paper ballots for public inspection.

State Rep. James Burchett, who sponsored the bill, said it was intended to "address issues that we've seen in the elections process." But voting rights advocates say the new legislation, just like SB 202, is motivated by former President Donald Trump's repeatedly-debunked claims about election fraud. Multiple recounts and investigations have found no evidence of widespread voter fraud or irregularities that could have impacted the outcome of the 2020 election.

The bill seeks to "intimidate" voters and election administrators, while doubling down on "anti-voter tactics" that particularly harm voters of color, Fields said at a press conference on Tuesday.

The broad bill would touch on numerous aspects of election administration, which critics worry will create new barriers to voters and overburden local election officials.

For instance, the new law would open original paper ballots for public inspection, a measure sought by Trump allies searching for fraud in the 2020 election. The state already publishes digital ballot images online but voter fraud conspiracy theorists argue that the only way to investigate potential fraud is by reviewing paper ballots, which currently require a judge's order to unseal. This provision would "make it easier for Big Lie pushers to open up sham ballot reviews, putting even more work on our election officials who are already strapped with resources," tweeted Hillary Holley, organizing director for the voting rights group Fair Fight.

The legislation could further strain local election budgets, banning outside organizations from giving money directly to county election offices. Republicans in multiple states have complained about millions of dollars in donations that election officials received from the Center for Tech and Civic Life, a nonprofit funded by Facebook founder Mark Zuckerberg that helped counties administer elections during the pandemic. The organization donated to both Republican and Democratic-led election offices, but Republicans have alleged partisan bias because Democratic areas, which tend to be more urban and populous, received a greater share of the funding.

County election offices received more than $43 million in outside funding for election administration during the 2020 election cycle. Under the bill, any outside funding would have to first be approved by the Republican-led State Election Board. Voting rights advocates say the measure would undermine local control over election administration and creates new hurdles for election offices that could lose vital funding if their requests are denied. The bill would also ban third parties from donating food or water to counties and polling stations, going even beyond the restrictions on distributing food and water to voters in long lines in SB 202.

The legislation also includes a number of unfunded chain-of-custody rules and ballot seal requirements that could cut into local election budgets as well.

"Instead of giving counties the resources they need, Republicans are pushing a bill to appease conspiracy theorists, dramatically undermining confidence in our elections while doing nothing at all to make them more secure," Fields said.

Georgia has already seen an increase in ballot application rejections as a result of SB 202 and states like Texas have seen the number of rejected ballots skyrocket since they passed a similar set of restrictions.

Fields joined lawmakers and other advocates from a growing coalition of voting rights groups in protest of HB 1464 on the state Capitol steps Tuesday, where the coalition announced a seven-figure ad buy to oppose the bill.

"This bill further restricts our voting rights and access to the ballot box," Hannah Gebresilassie, the executive director of Protect the Vote Georgia, told reporters. "This bill takes us backward, not forward."

Some advocates are particularly concerned about a portion of the bill that would give the Georgia Bureau of Investigation (a state police agency) the power to subpoena election records in fraud investigations. Most election investigations are currently led by Secretary of State Brad Raffensperger's office, though the GBI assisted with probes into the 2020 election and found no evidence of wrongdoing. The state legislature previously stripped Raffensperger of his role as the head of the State Election Board after he repeatedly pushed back on Trump's attempts to overturn Georgia's election results.

Voting rights advocates raised concerns that voters may be targeted for innocuous behavior, like helping others vote, if the GBI has the authority to investigate new election crimes created in SB 202, such as assisting other people submit their ballots.

"It's wrong for politicians in Georgia to force voters to worry about being investigated by the GBI for actions as simple as helping their neighbor vote," Isabel Otero, the Georgia policy director with the Southern Poverty Law Center Action Fund, said in a statement. "Any misinformation Gov. Kemp and politicians in the legislature may use to defend their maneuvers represent nothing but a Trojan horse for their real goal, to hijack state agencies and use them to undermine democracy and diminish the voices of Georgia voters."