Won't someone, anyone stand up to protest Tucker Carlson, Putin's biggest fanboy?

Marina Ovsyannikova stood up against Putin's war propaganda. Won't someone do the same to Putin's No. 1 fan? 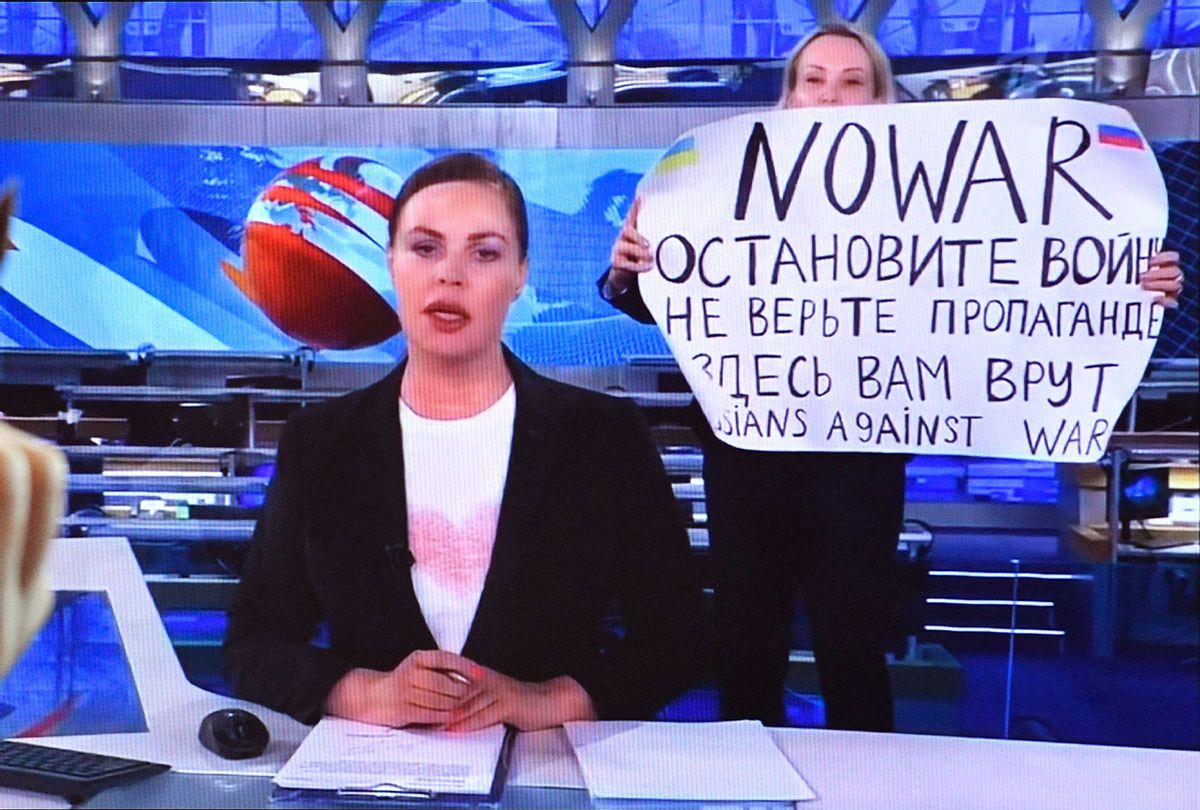 A woman looks at a computer screen watching a dissenting Russian Channel One employee entering Ostankino on-air TV studio during Russia's most-watched evening news broadcast, holding up a poster which reads as "No War" and condemning Moscow's military action in Ukraine in Moscow on March 15, 2022. - As a news anchor Yekaterina Andreyeva launched into an item about relations with Belarus, Marina Ovsyannikova, who wore a dark formal suit, burst into view, holding up a hand-written poster saying "No War" in English. (AFP via Getty Images)
--

This article originally appeared at Medium. Used by permission.

Recently, the world watched with a mixture of astonishment, delight and concern as an employee of Russian state television Channel One interrupted the evening news program by coming onto the set, shouting "Stop the war! No to war!" while holding up a large handmade sign that said: Don't believe the propaganda. They're lying to you here.

News editor and producer Marina Ovsyannikova rushed out behind a female anchor (reportedly a Putin favorite), who was presenting the national state-sanctioned "news," with a sign decrying the lies being told there about Putin's war against Ukraine.

She also released a pre-recorded video, in which she opens by saying, "What is happening right now in Ukraine is a crime, and Russia is the aggressor. And the responsibility for this aggression lies on the conscience of only one person. This man is Vladimir Putin." She then notes that her father is Ukrainian and her mother is Russian and calls what Putin is doing a "fratricidal war."

She movingly calls on her fellow Russians to follow her, to stand up for what is right. Many have already been doing just that.

For her courageous act, Ovsyannikova said she was interrogated for 14 hours and has been fined. She faces an unknown fate — conceivably years in a Putin prison.

Ukrainian President Volodymyr Zelenskyy praised her for the brave act of defiance, for telling the truth in the face of Putin's demand that his war against Ukraine be called a "special military operation" in support of Ukraine.

My question is, who will stand up for journalistic integrity here at home behind Tucker Carlson, the most vocal Putin cheerleader on Fox News? It immediately became a meme, but who will actually do it?

You know, Master Tucker Swanson McNear Carlson, pretend populist, who grew up rich because members of the actual proletariat were eating his stepmother's TV dinners; Tucker-of-the-Inevitable-Bowtie Carlson, who somehow manages to get U.S. males whipped up by strategically fretting about men being emasculated; Tucker of the Perpetually Confused Expression, who happily weaponizes stupidity; the Fox News "host" who, with a lot of competition among his colleagues, has stepped up as Putin's No. 1 apologist in the United States — so much so, that the Kremlin has noted how important it is for their propaganda efforts to showcase Carlson's work as often as possible.

I planned to give some examples of Carlson's fawning for Putin, but where does one begin? So many times has Tucker lavished praise on Putin or attempted to undermine Putin's critics that he is being called the "TuckyoRose" of his generation, and some call for him to be investigated by the Department of Justice.

A recent personal favorite of mine was his whining, dexterous double-pandering of "Has Putin ever called me a racist?" (Hm. That he was whining may mean that it was actually a triple pander. Let's enumerate: one, to his main man, Vlad; two, to white supremacists in his viewership; three, to the generally aggrieved viewership of Fox nation, for whom whining — especially by white men — elicits a Pavlovian response.)

Speaking of which, suffice it to say that when it comes to all things Vladimir, Tucker — much like our former president — is like that squirmy little dog that rolls onto its back (occasionally going so far as to pee itself) to show the dominant dog due obeisance. (Imagine that dog wearing a spiffy bow tie.)

No one feels animosity for such a dog, only pity. In the human realm? Well, the feelings may vary.

The question of the moment is this: How can democracies defend themselves against all the weapons utilized by authoritarians? Weapons like relentless propaganda and disinformation campaigns, attacks on journalists and the free press in general, and lawless oligarchs laundering their money in London, Amsterdam and New York while cozying up to officials with charitable giving and political donations.

Atlantic writer Anne Applebaum, author of "Twilight of Democracy: The Seductive Lure of Authoritarianism," who also wrote "The Autocrats Are Winning" last December, will testify to the Senate Foreign Relations Committee about what must the world's democracies must do to fight back against what she calls "Autocracy Inc," the loose but potent affiliation of autocrats who want to stay in power. What is needed, she writes, is a complete rethinking of our approach.

First among Applebaum's suggestions is to do a much better job of fighting disinformation. Which naturally brings us back around to the case of Tucker Carlson and his ever-growing ilk.

The founders of our republic knew that democracy had to have an informed citizenry to survive. How can it survive the massive dose of misinformation, disinformation, outright propaganda and bizarre conspiracy theories spewed by Fox News, Newsmax and OAN every day?

Should the First Amendment protect those who constantly muddy the waters — and steal the very possibility of citizens becoming better informed — with blatant lies?

And, yes, Fox does have real journalists in its employ — veteran video journalist Pierre Zakrzewski, who was working for Fox, and freelance journalist Oleksandra Kuvshynova were recently killed covering Putin's war in Ukraine, while British reporter Benjamin Hall was seriously injured — but the journalism practiced at Fox provides cover for the network's true work, that of Carlson and Laura Ingraham and Sean Hannity and Maria Bartiromo, who, as Salon's Amanda Marcotte recently noted, launder conspiracy theories in the Fox News­–QAnon feedback loop, through seemingly innocently bringing the theories up, trusting their viewers will then go online to dig in the garbage.

It is all so over-the-top treasonous that SNL recently cold-opened with a "Fox News Ukrainian Invasion Celebration Spectacular, from Mar-a-Lago," hosted by cast members playing Carlson, Ingraham and Donald Trump.

Comedians, including the truly heroic Zelenskyy, are doing their utmost to save democracy. Can our leaders do as much? And who will step up to be America's Ovsyannikova before the cameras at Fox News?