UPDATED: The Congressman's campaign now says he doesn't know how he was listed as a guest at the April 20 gathering 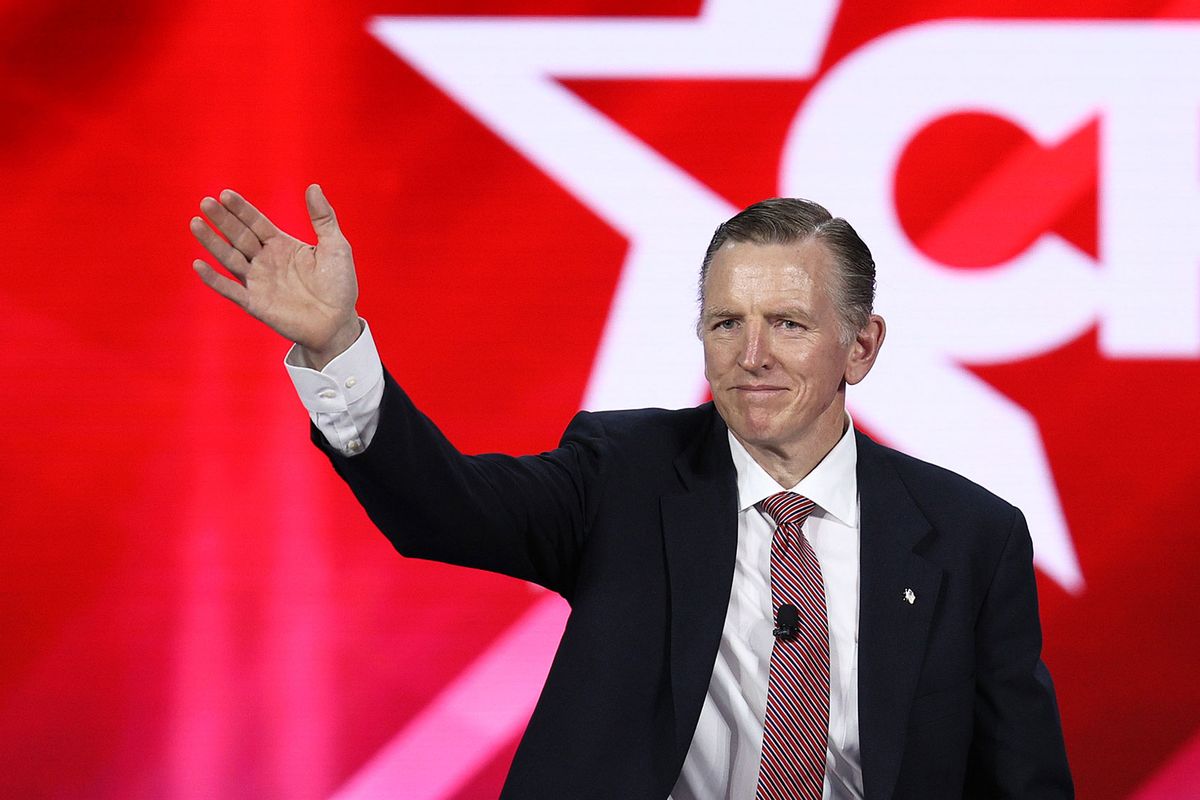 Rep. Paul Gosar (R-AZ) arrives for a panel discussion on the Devaluing of American Citizenship during the Conservative Political Action Conference held in the Hyatt Regency on February 27, 2021 in Orlando, Florida. Begun in 1974, CPAC brings together conservative organizations, activists, and world leaders to discuss issues important to them. (Joe Raedle/Getty Images)
--

UPDATE: A representative of Congressman Paul Gosar's campaign spoke with the Arizona Mirror after publication of their story to say the congressman would not be attending the white nationalist group's event on April 20. According to the Mirror, Rory McShane said American Populist Union never contacted Gosar, who did not respond to the paper's requests for comment before publication, or his campaign. McShane did not immediately respond to questions from the Mirror about why Gosar promoted his planned appearance at the American Populist Union event on his official Instagram account. This story has been updated.

Republican Congressman Paul Gosar was announced as a guest at a white nationalist event set for April 20, Hitler's birthday. Gosar promoted this event on social media, but his campaign office told the Arizona Mirror after publication of their initial report that he is not scheduled to attend and doesn't know how he was listed as a guest of honor.

Recently Gosar made the press rounds claiming that his attendance at white nationalist Nick Fuentes' AFPAC conference was due to a "miscommunication" of some sort, which he credited to his staff.

Related: Who is Nick Fuentes? A young white nationalist who hopes to pull the GOP all the way to Hitler

The details of the night's event is broken down as such:

The Social will be served with dinner and a chance to meet some of the best legislatures, best people running for office, and media personalities in the country! The night will also include addresses from our special guests!

There will be dinner served at the price of a ticket!

What will be served:

According to the AZ Mirror, the American Populist Union is aligned with a group of white nationalists known as "groypers" whose main goal is for their ideals to become cemented within the "Republican mainstream" way of thinking. Doyle, a listed guest at the event, is a known ally of "groypers," and has promoted their agenda in the past. According to AZ Mirror's report Doyle has previously organized a "Stop the Steal" rally with Fuentes, has spoken negatively of the life and work of Martin Luther King, and believes that "liberalism is linked to satanism."

Arizona state Sen. Warren Petersen, R-Gilbert was initially tied to the April 20 event, but has since backed out.

"When they first contacted me, I thought it was a County Young Republican event," Petersen said in a quote used by AZ Mirror. "After I realized it was an organization I was unfamiliar with, I respectfully declined to speak."