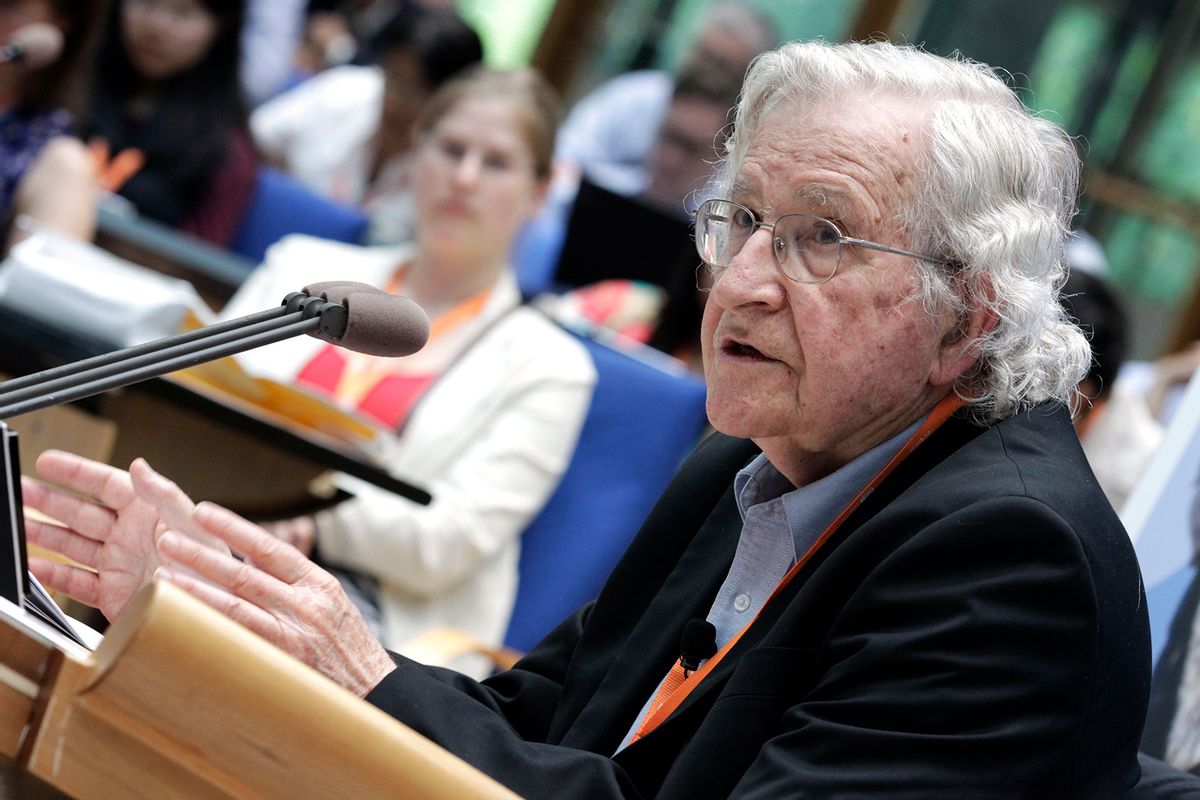 Renowned linguist, philosopher and Salon contributor Noam Chomsky issued a dire warning on Wednesday that humanity is at a crucial point in its history — largely due to the twin threats of climate change and nuclear war.

"Because of Trump's fanaticism, the worshipful base of the Republican Party barely regards climate change as a serious problem. That's a death warrant to the species," Chomsky said in an interview with The New Statesman. The American scholar, who is currently a professor at the Massachusetts Institute of Technology and the University of Arizona, also warned of Russian President Vladimir Putin's "monstrous" war in Ukraine. Chomsky explained that Putin has set off a chain of events which could lead to an apocalyptic global war.

RELATED: Noam Chomsky discusses the path to a livable future

"We're approaching the most dangerous point in human history," Chomsky concluded. He recalled an article he wrote as a child in 1939 about how the cloud of fascism was gradually overtaking the world and ominously added, "I haven't changed my opinion since. It's just gotten worse. The doomsday clock of the Bulletin of Atomic Scientists — under Trump they abandoned minutes, moved to seconds. One hundred seconds to midnight. That's where it is now because the threats are accumulating."

Chomsky has previously expressed sympathy for Putin's policy positions toward Ukraine, although he has never supported acts of unprovoked war such as the one currently being waged by Russia against Ukraine. In a 2015 interview with Salon, Chomsky noted that throughout the 1990s NATO expanded to the borders of Russia even though Mikhail Gorbachev, who was then the leader of the Soviet Union, had been verbally assured that in return for supporting German reunification NATO's sphere of influence would not go past East Germany.

"And now it's gone further, even to Ukraine which is right at the heart of, apart from historical connections, of Russian geo-strategic concerns," Chomsky argued. "That's very serious." He later added that the media coverage was "all about what a lunatic Putin is" and claimed that "you can like him or not, but his position is perfectly understandable."

Chomsky has been a consistent proponent of taking aggressive measures to address climate change. In a 2020 Salon interview, he drew attention to a document by President Donald Trump's Transportation Department in which they admitted that global temperatures will exceed four degrees centigrade above pre-industrial levels by 2100 but only proposed reducing car and truck emissions.

"This is the most extraordinary document in human history," Chomsky told Salon. "I can't think of anything like this. The thing that comes closest is the Nazi Wannsee declaration in 1942, which was the formal decision of the Nazi party to wipe out all the Jews of Europe. Not even that said, 'Let's race ahead to make some money while destroying the prospects of all human life on Earth.' Why isn't this the headline everywhere?"

In December Chomsky told Democracy Now that he believes America is moving toward a "proto-fascism, where many of the symptoms of fascism are quite apparent — resort to violence, the belief that violence is necessary."

He added, "A large part of the Republican Party, I think maybe 30 or 40%, say that violence may be necessary to save our country from the people who are trying to destroy it, the Democrat villains who are doing all these hideous things that are fed into their ears."