The Hubble telescope turns 32: Here are some of its greatest hits

The renowned space telescope has taken thousands of historic images in its life. Here are some of the best 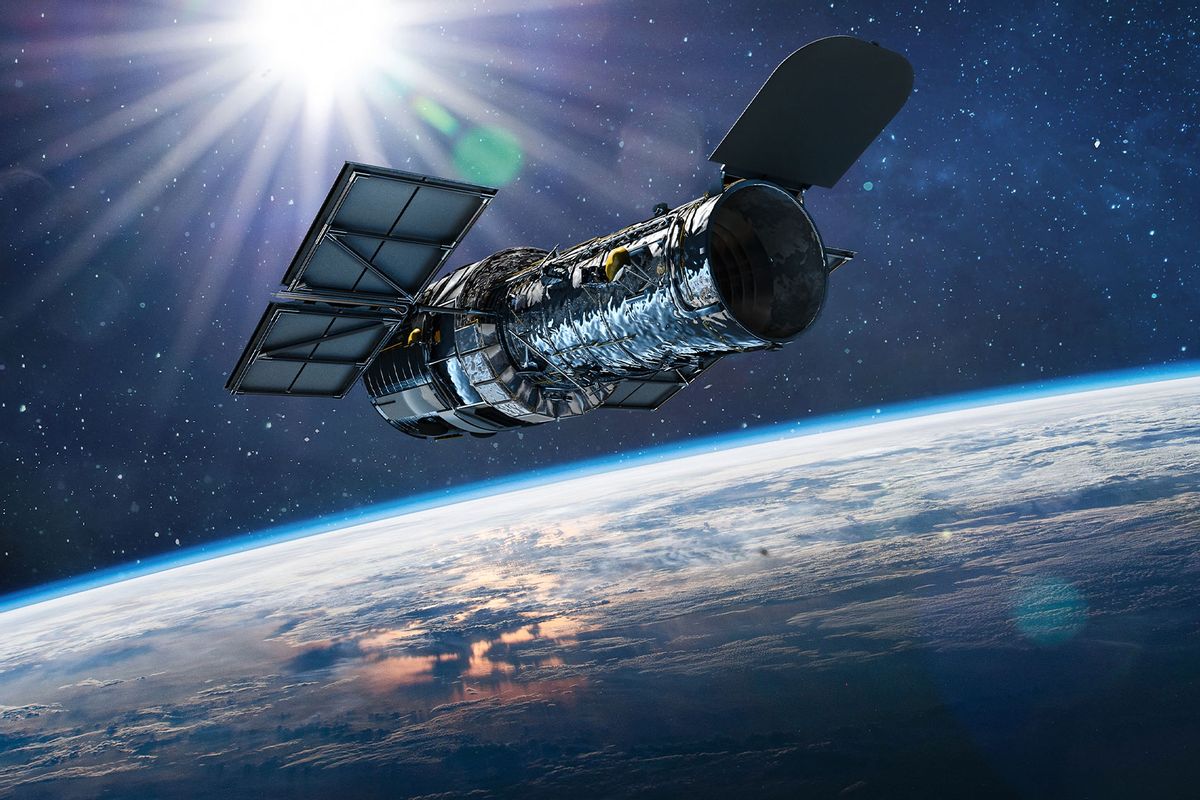 Between 1990 and 2003, NASA scientists launched a series of technologically advanced telescopes into space. Dubbed the Great Observatories, these four astronomical telescopes were designed to observe areas of space with equipment that could monitor the range of frequencies on the electromagnetic spectrum.

The first of those telescopes, the Hubble Space Telescope, is perhaps the most famous of the bunch. (The other three are the Compton Gamma Ray Observatory, the Chandra X-ray Observatory and the Spitzer Space Telescope.) For one thing, it alone among the group can be actively maintained in space by astronauts.

RELATED: James Webb Space Telescope: When to expect the first images from the state-of-the-art observatory

It has also been the source of breakthrough discoveries about black holes, helped scientists learn more about the age and expansion of the universe, and provided unprecedented detail about the features of various objects in our own solar system.

As the Hubble Space Telescope turns 32 on April 24th, 2022, it is a fitting moment to reflect on some of its most breathtaking finds. 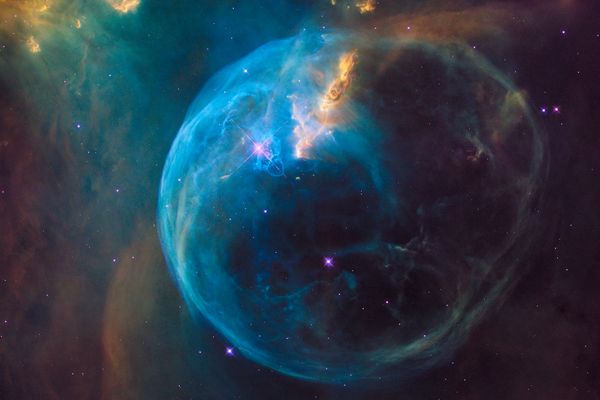 When the Hubble Space Telescope celebrated its 26th anniversary during the historic year of 2016, it managed to capture an image that seemed right out of "2001: A Space Odyssey." Known as the Bubble Nebula, or NGC 7635, it is an emission nebula located 8 000 light-years away; emission nebulas are interstellar clouds which are comprised of ionized gases. These, in turn, produce light in various wavelengths, all of which can show up in this image in a particularly beautiful way. 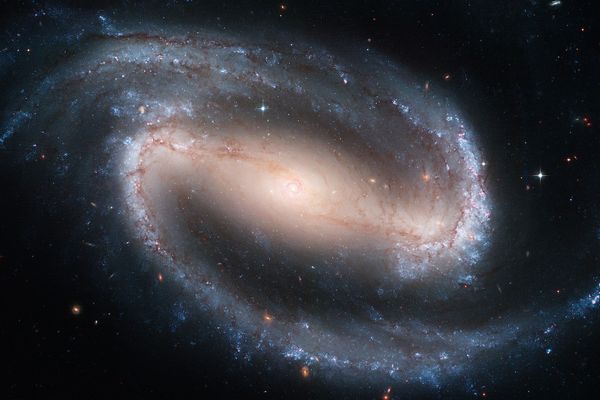 NGC 1300 is considered to be prototypical of barred spiral galaxies. (NASA, ESA, and The Hubble Heritage Team (STScI/AURA))

Astronomers have long struggled with the fact that, despite advances in optical technology, you can really only see so much from the ground. The Hubble Space Telescope, freed from the tethers of gravity and the blurriness of the atmosphere, can produce images of especial clarity. This one is of a galaxy similar to our own. Galaxy NGC1300 is a barred spiral galaxy, meaning that it is shaped with a spiral but has a bar-like structure at its core composed of stars. We live in a barred spiral galaxy of our own, the Milky Way Galaxy, where our solar system is located, but because we are stuck inside it, we'll never get a great look at our own. This image might be relatively close to what it would look like if we could somehow look at the galaxy as reflected through a giant mirror. 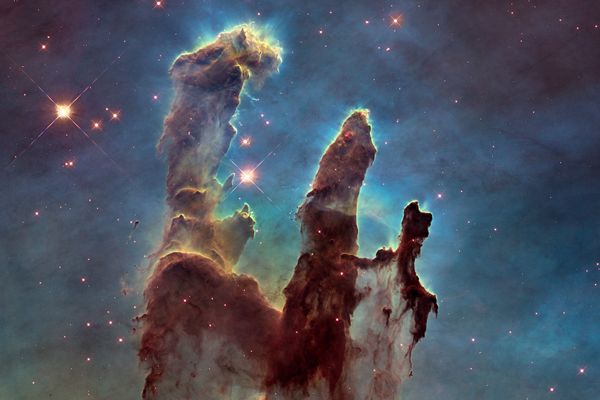 This image shows the pillars as seen in visible light, capturing the multi-coloured glow of gas clouds, wispy tendrils of dark cosmic dust, and the rust-coloured elephants' trunks of the nebula's famous pillars. (NASA, ESA/Hubble and the Hubble Heritage Team)

3 The Pillars of Creation

This is one of the most famous of the Hubble Space Telescope's images, and for a good reason. The Pillars of Creation exist in the Eagle Nebula (part of our Milky Way Galaxy) and is comprised of interstellar dust and gas. They are magnificent not only because of their murky and otherworldly beauty, but because they are literally stars being born. The Hubble has been able to monitor how these structures have evolved over time, to the fascination of astronomers. It is one of the most famous Hubble images ever, and is often printed on posters and fine art prints. The processing of the photo also helped restore the telescope's image in the public eye after the public lost faith in the expensive project due to its cost and expensive repair mission in 1993. This was the first major photograph to come out after the repairs, and as an astronomer who worked there at the time later recalled, "I think for the public, there was the realization that, 'Wow, Hubble really has been fixed' and 'Wow, look what Hubble can show us.'" 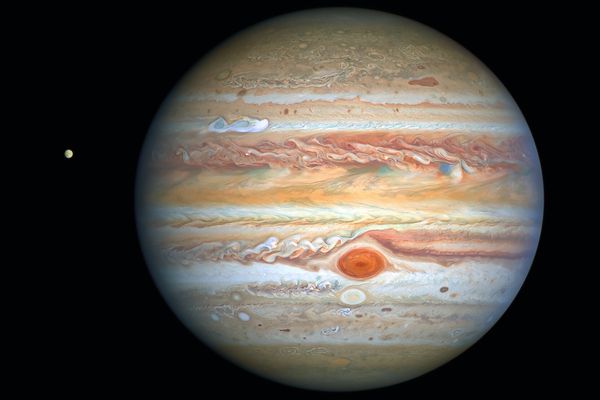 This image of Jupiter, taken by the NASA/ESA Hubble Space Telescope on 25 August 2020, was captured when the planet was 653 million kilometers from Earth. (NASA, ESA, A. Simon (Goddard Space Flight Center), and M. H. Wong (University of California, Berkeley) and the OPAL team.)

Jupiter is the largest planet in our solar system, but is also believed because of the swirling gases once can see churning at the top of its atmosphere. The most famous structure of all is, of course, the Great Red Spot, which is 40 times as deep as the Mariana Trench (the deepest point on Earth). This photograph was captured by the telescope in August 2020, when Jupiter was 653 million kilometers from Earth. Even more fascinating, you can spot the Jovian moon Europa in the background on the left side. Scientists believe that Europa, with its briny surface, could potentially harbor life. 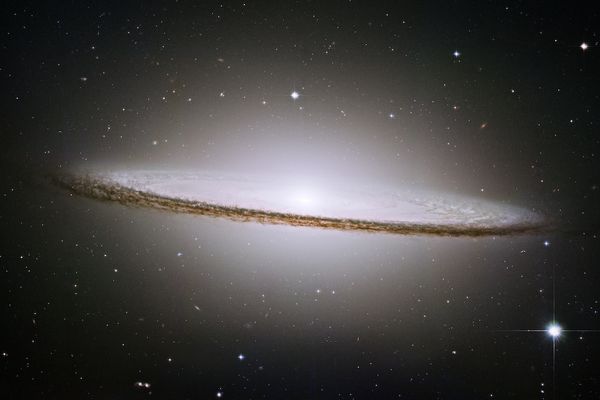 The Sombrero lies at the southern edge of the rich Virgo cluster of galaxies and is one of the most massive objects in that group, equivalent to 800 billion suns. (NASA/ESA and The Hubble Heritage Team (STScI/AURA))

The so-called Sombrero Galaxy earned its cheerful moniker by resembling the famous wide-brimmed Mexican hat. Officially given the much less exciting name of Galaxy NGC 4594, this galaxy exists in the constellation Virgo roughly 28 million light-years from Earth. The halo surrounding it is comprised of dust, and this particular 2017 image is noteworthy because it is also one of the largest mosaics ever created based on Hubble images. 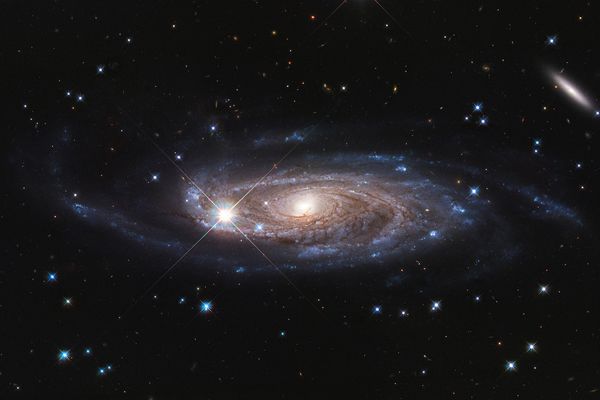 Galaxy UGC 2885 may be the largest one in the local universe. (NASA, ESA, and B. Holwerda (University of Louisville))

Giant galaxy UGC 2885 is notable because, as its name indicates, it may very well be the largest known galaxy in the local universe. It is also a barred spiral galaxy, located in the Perseus constellation, and contains 10 times as many stars as our own galaxy. At the same time, it is relatively inactive compared to other galaxies, only producing new stars at roughly half the rate as new stars in the Milky Way Galaxy. Thanks to the Hubble telescope, scientists learned that this galaxy has a small bar in the ring structure of its core. As a result, its classification was changed from unbarred spiral galaxy to barred spiral galaxy. 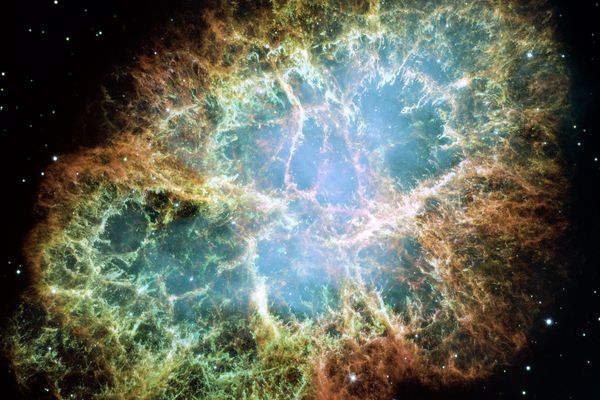 In the 19th century, an English astronomer and aristocrat known as William Parsons, 3rd Earl of Rosse, spotted something in the Taurus constellation that reminded him of a crab. It turned out that what he observed was a supernova remnant and pulsar wind nebula, but the crab image clearly left a lasting impression. The so-called Crab Nebula has since become one of the most well-studied celestial objects in all of astronomy, and this image from the Hubble Space Telescope is the largest and most detailed ever captured of it. Yet despite all of their observational power, astronomers are still unsure of the nebula's precise distance from Earth. 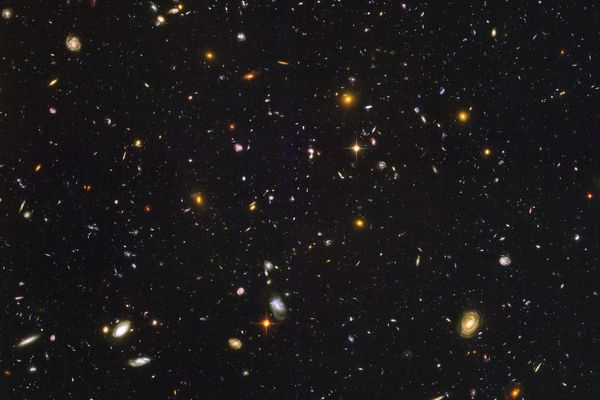 This view of nearly 10,000 galaxies is the deepest visible-light image of the cosmos. (NASA, ESA, and S. Beckwith (STScI) and the HUDF Team)

We saved the best for last.

In 2003 and 2004, the Hubble Space Telescope stared at a region of space that appeared empty. Yet after a long exposure, Hubble revealed that the segment of space was far from it — rather, it was full of thousands of points and smears of light, all of which were entire galaxies with billions of stars.

This remarkable image, known as the Hubble Ultra Deep Field took nearly four months to put together, from late 2003 to early 2004, and required 400 Hubble orbits around Earth to do the job. It includes almost 10,000 galaxies: The closest ones are well-defined ellipticals and spirals, while the more distant galaxies are red dots that could date back to earlier in the universe's history (i.e., when it was roughly 800 million years old). It was the follow up to the Hubble Deep Field, a similar image with a shorter exposure which had been taken over a period of 10 days in 1995.

The Ultra Deep Field image may well be one of the most important images ever taken by humans. It illustrates the incredible vastness and size of our universe, and how even in the seemingly empty regions, there are actually trillions of stars. It is humbling to think that there is probably not merely one intelligent civilization like ours in that image, but perhaps hundreds or thousands.

"As the images have come up on our screens, we have not been able to keep from wondering if we might somehow be seeing our own origins in all of this," Robert Williams, director of the Space Telescope Science Institute in Baltimore, Maryland during this period, said at the time.