Now that my mother's dead, we're closer than we've ever been 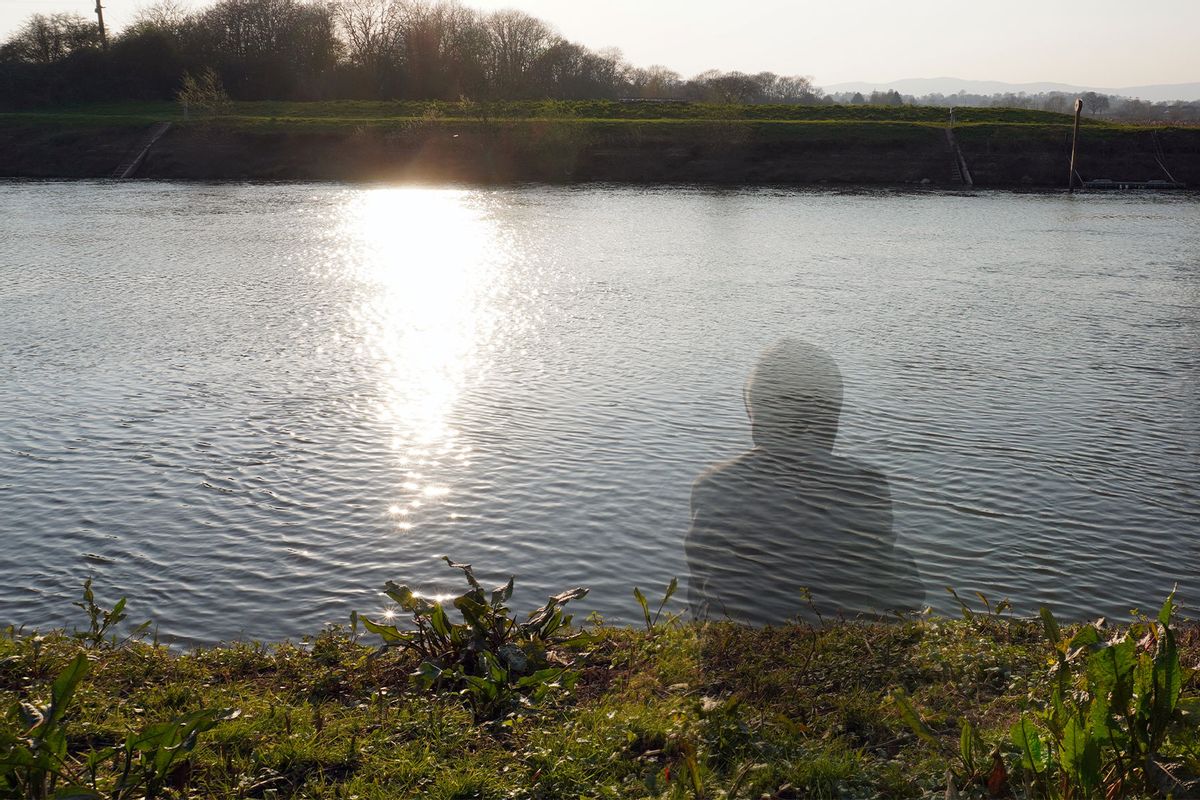 There will come a time in my life where I'll stop to think about the fact that I've lived longer without my mother than I have with her; and that's only if I'm lucky enough to live longer than she did.

I just googled to see exactly how long it's been, but accidentally typed "how long ago was October 31, 2013?" Rather than what I intended to type, which was "how many years ago was October 31, 2013?" The answer revealed two things that I found amusing: 1) Yes, I really am that bad at math; and 2) 3,100 days. The answer to that question I typed into Google is 3,100 days, which looks so much worse than eight years, or even nine, or even ten.

My mother and I were never close. She probably would have told anyone who asked that we were, but that just lends itself to the point that I've been trying to make with everything I say, everything I write, and everything I do since well before my dad found her dead on the couch in their living room early one Halloween morning, eyes still open, as though holding on to that last glimpse of the squirrels playing at the base of the tree in their front yard. I have a picture of her that I look at more often than I should. Red pants, weird mom hat, digging into a bag of dried corn to feed those squirrels. A snapshot of a backward view. Me seeing what she saw. Minus her. 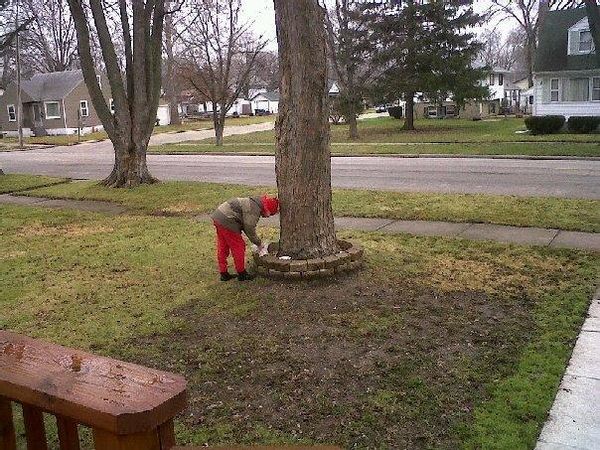 Here she is, feeding the squirrels (Robert McClure)

She looked like sunshine itself but could level you with a sentence.

We weren't close, and that became more and more obvious the longer we had to not get to know each other. She was the head cheerleader in high school and looked like a young Cybil Shepherd during her formative years, a privilege that I couldn't imagine having the relief of being my own reality even if I sat and focused on it all day, like a meditation. She grew up on a farm in rural Illinois. She was blonde, and bouncy, but also really mean and really funny; a combo that almost everyone who walks this earth can't help but love. Whereas I, her only child — though she probably assumed I would grow up in her mirror image — am often told by internet trolls that I look like a combo of Richard Ramirez and Cindy Lou Who. She looked like sunshine itself but could level you with a sentence. Whereas I spend a great deal of energy trying to look outwardly intimidating but have, in almost 45 years, not figured out how to keep my eyes from watering or my throat from locking up when I speak to a crowd of more than two.

Related: Tarot helped me take advice from my mother

My mom died when she was 62. We didn't see it coming, but also we did. The night before my dad called to tell me she sent me a message while I was smoking a cigarette in the kitchen of my studio apartment in Brooklyn. This sounds super woo woo, but I swear it's the truth: I had my leg bent and rested up on the edge of the kitchen sink I was ashing into when all of a sudden I heard her in my mind saying, "When I was your age you were almost a teenager." Or something like that. I'm paraphrasing — it's been a while — but I'm sure that's close. It didn't seem strange to me. I took it as a dig just like all the little digs I received from her my whole life. I brushed it off as her finally teaching herself how to mentally transmit them from thousands of miles away without the use of a visit, pen or phone.

But when my dad called me the next morning, ruining my Halloween plans to watch "The Exorcist" and see a band called, in perfect gallows irony, THE BODY, I realized that her message was the last conversation we'd ever have while she was still alive. She still sends me messages sometimes — little motherly prompts and nudges which I am way more receptive to now than I ever would have been before. 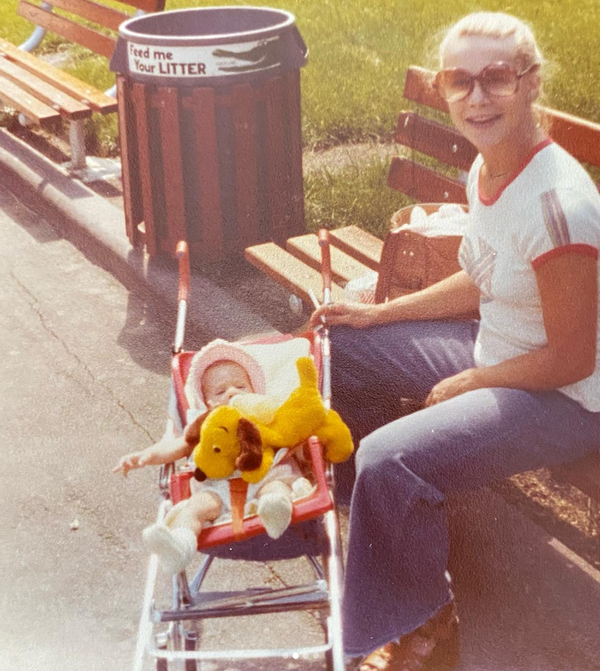 This about sums it up (Robert McClure)

When my mom died, not counting her message to me the night before, we hadn't spoken in two years. From right around the time I learned to talk, right up to the end, we spent every year finding new and creative ways to do the exact opposite of what we should have been doing all that time as a mother and only child. Rather than make new good memories together, we ruined the memory of any we'd already made. Rather than her teaching me motherly wisdom that I'd absorb like vitamins, "Gilmore Girls"-style, she taught me how to endure mental and physical pain, as they say, "the hard way." She taught me how to be alone, where it was safe. And instead of "I love you" being the last thing she ever heard me say to her in person, it was "bitch," which I muttered just loud enough for her to hear before being driven to the airport by my dad after the last Christmas we'd all ever spend together.

Mothers and daughters have been abusing their time together since the dawn of time itself, and I certainly beat myself up for being a part of that nasty cycle for many years after my mom's passing. But then something started to shift. There's a strange gift to death, and that's the softening of memory. With every year that passed after losing her, the process of grieving my mother brought me closer to her than I'd ever been when she was alive. Before I'd get maybe one good interaction out of every 20. In her absence — made precious because it's forever — I can make her into anything I want her to be. I can navigate my days carrying her with me, infusing myself with the kind of warm exchanges I always wanted but never got. This all sounds depressing as hell, but it's been very healing for me.

Mothers and daughters have been abusing their time together since the dawn of time itself.

When I flew from Brooklyn to Illinois to help my dad with my mom's service I spent some time going through her stuff. She was a hoarder, which will maybe be another whole essay down the line as I don't want to fully drag this lady through the mud for Mother's Day. But yeah, let's just say there was a lot of stuff to go through. In doing so I'd make piles. Piles to throw away. Piles to donate. And a small pile of things to keep, which I wish now had been much bigger.

RELATED: I was a hoarder until I became a parent. Here's what I'm glad I kept

In many ways going through her things felt like reading a really interesting book for the first time and it was then and there that I began to form a story of her in mind. The story of the mother I always wanted. And now, together, we have all the time in the world. In her death, we're given a second chance.

My mom told me, many many years ago, when I was still little, of a nightmare she once had. This stuck in my head since the day she told it and I've always thought of it as kind of an odd thing to tell a kid, but now it, like her, has taken on a more positive meaning. In her dream, we were flying in the small airplane my papa owned. It wasn't unusual for farmers to own planes at that time, but we would still feel fancy and special flying in it. In this dream of us in the plane my mom was holding me in the back seat as he flew and we suddenly and violently crashed. My mom said she looked down to check on me in her dream and saw that her arm had broke in the accident and a bone from it had pierced through her skin and into me, killing me. I treated her like a true psycho for telling me that but now I see it differently. She cared about me. She was checking on me. And she never let me go. She loved me with an inconvenient tenderness in her subconscious that she just couldn't find a way to wring out into the waking hours we shared. I can carry out that dream for her. I can turn it from a nightmare into something re-written as a good relationship. And together, in our losses and vapors of shifting memory, we can make new peace.