The Johnny Depp and Amber Heard verdict: A victory for the war on free speech

The GOP's dystopian vision comes into view: Free speech only for the anti-woke, socks in mouths for everyone else 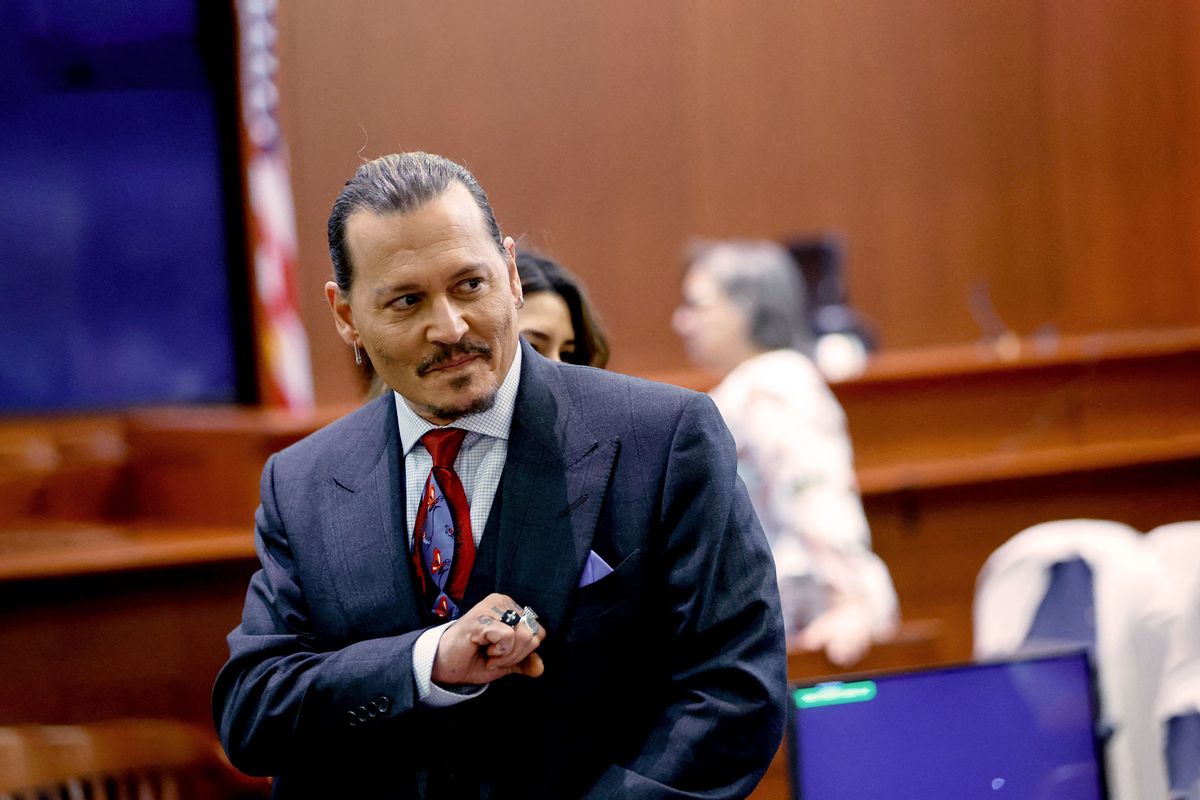 Actor Johnny Depp gestures as he stands in the courtroom during a recess amid his defamation trial against his ex-wife Amber Heard, at the Fairfax County Circuit Courthouse in Fairfax, Virginia, on April 27, 2022. (JONATHAN ERNST/POOL/AFP via Getty Images)
--

On its surface, the verdict in the Amber Heard and Johnny Depp trials makes no rational sense. Not just because the jury clearly ignored the actual evidence at hand when finding Heard guilty of defamation and rewarding Depp for his frivolous lawsuit with an eye-popping $15 million. But also because the jury awarded Heard $2 million in her countersuit against Depp for defaming her with a conspiracy theory accusing her and her witnesses of lying and her photographs and her other documentation of all being fake. How can the jury both believe her and not believe her?

Part of the problem is that it's likely that the jury, which was notably not sequestered, was influenced by the incoherent but robust pro-Depp sentiment heavily peddled online and throughout right-wing media. Because of this, as many commentators pointed out, this verdict should be viewed not just as a reaction to the facts at hand. It's part of a larger backlash to the #MeToo movement and other movements like Black Lives Matter, which are increasingly under fire for making people feel bad about the widespread injustices that persist in our society. That's why it's not quite right to argue that the debate is over whether or not we "believe" women. Opponents of #MeToo believe women just fine. They're just sick of hearing about it.

RELATED: Depp defamation verdict excites the right: "A win for all men who have been wrongfully accused"

The mixed verdict reflects the sentiment driving our current anti-feminist backlash: Yes, we believe victims of gendered violence, we just want them to shut the hell up.

Depp may not personally identify as right-wing, but Republicans are eager to adopt him, as evidenced by the official party taunting #MeToo supporters online after the verdict.

The popularity of Depp's frivolous lawsuit with Republicans should be understood as part of a larger and nationwide trend of conservatives trying to stomp out any speech they find annoyingly "woke." They would like to stay asleep, thank you very much, and feel increasingly entitled to stomp out any speech or writing that might trouble their unwoke minds with facts.

Consider the raft of book bannings and educator silencing laws being passed by Republicans across the country. Materials and ideas aren't being banned by Republicans because they are inaccurate or unfactual. On the contrary, the more truth there is to an idea, the more likely Republicans are to target it for censorship. The "Stop WOKE" bill in Florida, for instance, bans ideas because they may cause "guilt, anguish, or other forms of psychological distress." Learning that slavery and Jim Crow happened can be distressing, of course, so materials that include these facts are being censored across the country. Similarly, the "don't say gay" bill in Florida is openly geared towards forcing educators to lie to children by penalizing them for acknowledging the fact that LGBTQ people exist. In Texas, the bans on factual information about race are so stringent that teachers are afraid to correctly identity the white supremacist motive of the recent mass shooting in Buffalo, New York.

What we're seeing with the GOP war on free speech is a belief that they are entitled to erase any information, no matter how true, as long as it makes them feel bad. Donald Trump escalated this attitude with actions like flinging the term "fake news" at any news that reports actual facts. Recently the Supreme Court struck down a law in Texas that banned social media companies from removing posts based on "the viewpoint of the user or another person." This law was justified with disingenuous "free speech" arguments, with Republicans waxing poetic about free exchange and the supposed dangers of "cancel culture." In reality, however, this law was a full-blown attack on free speech.

The court found that forcing social media companies to host content against their will is a violation of free speech rights. Additionally, anyone who has actually been on the internet could see how this law attacked free speech in an even more insidious way. The law would have made it impossible for social media networks to curb the troll problem that is a direct threat to free and robust discourse online. This law would have handed social media platforms over to COVID-19 denialists, white supremacists, men threatening to rape any woman with an opinion, etc. No one else would get a word in edgewise, and would largely leave these platforms rather than deal with non-stop lies and abuse. It's only "free speech" for the most repugnant people in our society. For everyone else, it would be censorship through relentless harassment.

The vast majority of what gets decried as "cancel culture" is not actual censorship, but anger at people on the left who use their own free speech to criticize bigoted opinions.

Republicans love to claim they're for "free speech" and against "cancel culture." But the vast majority of what gets decried as "cancel culture" is not actual censorship, but anger at people on the left who use their own free speech to criticize bigoted opinions. Actual censorship is what the right is really championing. Just look at their book bannings, attacks on educator freedom, and frivolous defamation suits to silence stories of abuse.

It's tempting to characterize the conflict between GOP claims to be for "free speech" and their actual censorship efforts as hypocrisy. But it's not, really. The right's actions are entirely consistent with the belief that conservatives and bigots get to say whatever they want, and liberals have to shut up about it. It's "free speech" for anti-woke, and socks in mouths for everyone else.