As I discovered, there is no way to quantify the toll of all this gun violence — not even in a math class 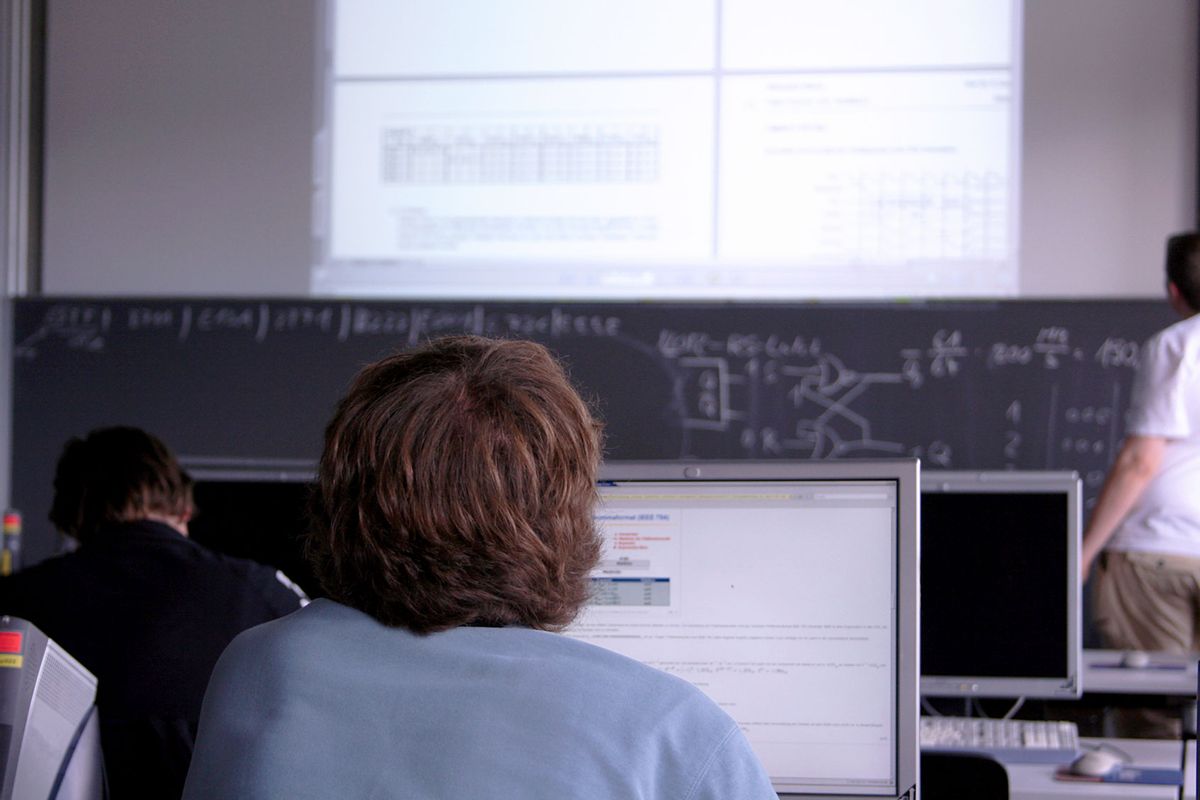 I've known a lot of fourth-graders in my life. Three quite intimately.  Fourth-graders running about and tugging at my arms and legs no matter what else might be going on to "watch me do this" or to "play with me". They're all about the interruption and the attention. They probably would want us now to take a moment and at least "watch" what has happened, don't you think?

But the world continues to spin. From the sublime to the ridiculous, things go on. This means that despite the numbing and enveloping sorrow, this morning I had to think about linear algebra for a class I was teaching.

Linear algebra is the math of making sense of a cloud of points, which do double duty — serving not only as locations in space, but also as vectors. Vectors are characterized by having both magnitude and direction, like force or velocity. It's not just how hard you push or how fast you are going, but toward what end? For many purposes and in many settings we are each lists of numbers — we're not meat puppets, we're data puppets — so we're all vectors. We've all got magnitude and direction.

It's all a big mess in my mind this morning. Perfect equations drift about a broken world and heartbroken families.

There is a famous theorem about vectors from the Dutch mathematician L.E.J. Brouwer. Among other things Brouwer was known for founding the intuitionist school of mathematics, a movement that declared that the only true mathematics was mathematics that was careful with its infinities and didn't  prove theorems through the use of the law of the excluded middle. The law of the excluded middle is a technique of logical argumentation that most famously rears its head in "proofs by contradiction", wherein you show a statement is true by assuming otherwise and use this contrary assumption as a starting point of an argument that leads to a known mathematical falsehood, like 0=1. Once you arrive at that blatant falsehood, you know that first step was a misstep and that the original statement must be true.

For many purposes and in many settings we are each lists of numbers — vectors.

At that point, most mathematicians would declare QED. No construction required – a direct argument would be nice, but unnecessary – for everyone except Brouwer and his followers.

But, despite Brouwer's objections, math is a world of either/or a world of sharp divides, a world of excluded middles, a stripped-down version of experience. And as I'm preparing, I'm thinking about that world and our world.  I'm thinking there is maybe another form of the law, a meta-form, that storytelling and sense-making either use math or they don't.  Like the aphorism attributed to Stalin, "one death is a tragedy, one million deaths is statistics." The story of a single death can worm its way into your soul in a way that one million deaths can't, that at that scale, at that altitude, the heart is left behind and the brain kicks in. But another reading is that when death becomes statistics, when death intersects mathematics, tragedy is side-lined. We're either talking feelings or we're talking fractions and never the twain shall meet.

When, last week, my students walked into class, still mourning last week's tragedy – since when did teaching require training in grief counseling? –  I felt I couldn't just jump into our discussion of high-dimensional spaces. I — we — had to deal with the reality of what had happened in the low-dimensional space – three, or four dimensions if you include time, and, well, we've got to include time.

This is about something that happened – space around us. It's more difficult to work in this smaller more intimate space, but we tried. Eventually we brought it back to linear algebra and its place as the engine of the internet, the web, and thus a part of the dark energy that drives social media. Its place in the online architecting of the virtual dark corners of radicalization. We talked about the idea of linear algebra for good, and that maybe they might be a part of that kind of radical move. We explored the middle. Eventually we just talked about linear algebra.

And here we are again. Once more I find myself stuck in the excluded middle and this time I'm thinking about Brouwer's Theorem. It's about vectors and alignment. I'm thinking about people all around the world, each with magnitude, each with direction. It's the direction that's bugging me, the misalignment, which when amplified or enabled with tools that give some people disproportionate magnitude to create places of pain and sadness. It's because I've got to go teach this class, but I'm a lousy compartmentalizer and I'm thinking about tragedy in terms of vectors and I feel like I need to have another moment — that this moment requires its own moment of recognition everywhere, that we should all be aligned in sadness and anger – and at least a moment in our class so that we can air it all out before entering the safe place of Platonic objects.  I need a space as much as they do. Grief counseling goes both ways in my classroom.

Brouwer's discovery sometimes goes by the cringeworthy name "The Hairy Ball Theorem" (I kid you not). It's about a field of vector on a perfect sphere, like the surface of a cue ball, and where each vector, one for each of the infinity of points on the sphere, has the further stipulation that it  be tangent to the sphere, meaning that if at that point you placed a playing card (if there is a pool table around can a deck of cards be far away?) then the vector must lie on the card. Replace all those vectors by stray strands of hair and you've got your hairy ball. Brouwer's Theorem says that there is no way to comb those glancing locks to get them all aligned while keeping them tangent, that no matter how carefully you nudge them like the balding man carefully arranging his combover, you'll always end up with a cowlick, a place where suddenly the flow goes the other way.  Mathematically, it's the necessity of a singularity. So as I was preparing for class, I was thinking about vectors and matrices and how we are a vector field glancing off the surface of the ball that is the Earth. That we can't align is a mathematical fact. If only the singularity were singular.

Read more on gun violence statistics in the United States:

Dan Rockmore is the William H. Neukom 1964 Distinguished Professor of Computational Science at Dartmouth College, and an External Professor at the Santa Fe Institute.  In addition to his technical work he has a broad portfolio of science outreach work. He is the co-producer of the mathematics documentary The Math Life as well as three other  mathematics/computer science documentaries.  His writing for the general public has appeared in The New Yorker, Slate, and the Atlantic. His most recent books are two edited volumes, "What are the Arts and Sciences? A Guide for the Curious" (UPNE), and "Law as Data: Computation, Text, and the Future of Legal Analysis" (Santa Fe Institute Press), co-edited with Professor Michael Livermore of the UVA School of Law.