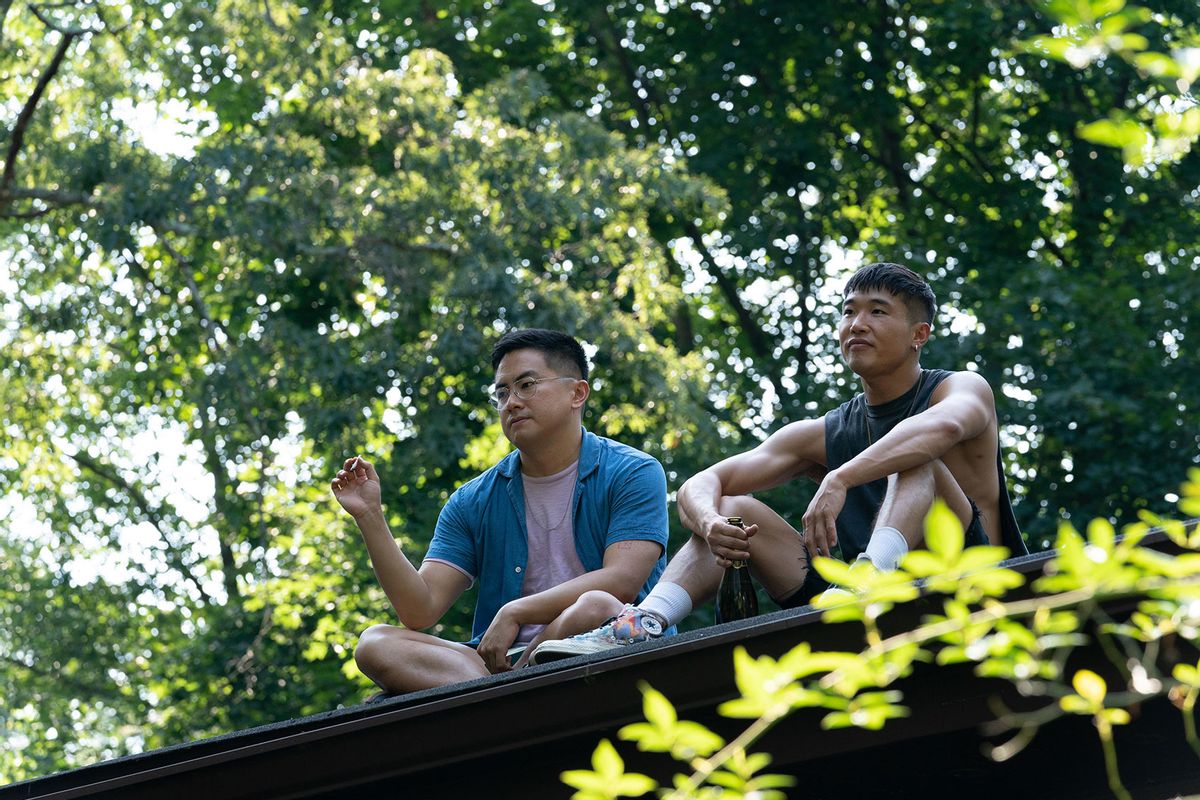 On Monday, in a now-deleted Tweet, writer Hanna Rosin criticized Hulu's popular new film "Fire Island" for its so-called failure of the Bechdel test. Rosin wrote that the movie "gets an F- on the Bechdel test in a whole new way. Do we just ignore the drab lesbian stereotypes bc cute gay Asian boys? Is this revenge for all those years of the gay boy best friend?"

By the next day, the Tweet was gone and a whole new string of Tweets had appeared, with an apology. Rosin wrote: "My tweet was careless and thoughtless. Truly. The movie was telling a story about queer AAPI [Asian American Pacific Islander] men, whose experiences don't show up enough in movies or anywhere else … What I had to say was beside the point, not to mention a buzzkill on a fun summer movie."

The "fun summer movie" in question was written by its star, Joel Kim Booster, and centers the experiences of queer Asian men. In doing so, it's a rarity in Hollywood where the majority of stories are still told by and about straight people, especially cishet white ones. When characters are queer, they're usually white. In 2019, GLAAD found that only 34% of queer characters were characters of color, a small percentage that kept decreasing, down from 42% the year before and 57% in 2017.

But Rosin focused her Tweet on the film's lack of women characters and cited a long-standing measurement of women's roles in cinema: the Bechdel test. What is the Bechdel test and what does the person it's named for have to say about all this?

RELATED: How "Fire Island" puts the Pride in "Pride & Prejudice"

The Bechdel test comes from the comic "Dykes to Watch Out For" by Alison Bechdel, MacArthur Fellowship winner and author of the graphic memoir "Fun Home," which was turned into a 2015 Tony Award-winning musical. Bechdel and friend Liz Wallace created the test in 1985 (sometimes it's called the Bechdel-Wallace test) when a character tells another she only goes to see a movie if it features two female characters who talk to each other about something other than a man.

Easier said than done. In the comic, it's only "Alien" that fulfils those qualifications. The website bechdeltest.com has included a database since 2013 of movies that pass and movies that fail miserably. Recent movies that fail to complete three components of the Bechdel test (two female characters, talking to each other, not just talking about a man) according to the website include "Ambulance," "Fantastic Beasts: The Secrets of Dumbledore" and "The Northman."

Does "Fire Island" pass? Well . . . the Hulu film, a loose updating of Jane Austen's "Pride and Prejudice," is focused on a found family of queer friends determined to have one last wonderful summer on Fire Island, New York's famed gay mecca. All the friends are male except one, Erin (Margaret Cho). Her role is not the largest or most developed: Erin is older, partner-less and losing her home. The movie's only other woman? A very minor, very angry lesbian on a boat.

But the film is a showcase for queer Asian men and those specific experiences that have been hugely absent from popular fiction. Objecting to one missing story is not taking into account the other marginalized stories it does bring to light. D.R. Medlen of The MarySue wrote: "Instead of being excited about a mainstream movie providing a platform for a traditionally underrepresented group, we get a hot take from the school of white feminism that no one asked for . . . White feminism has a long history of making arguments about inclusion or visibility only if specifically white women are included."

So, the short answer is no, it doesn't pass. However, perhaps it's time for other, different measures. Valid criticisms can be made about the film, including about its portrayal of Black queer characters. But as for its lack of women, it's not about them. Actor and producer Emerson Collins tweeted, "'FI' fails [the Bechdel test] rather intentionally . . . gay Asian men are rarely/never centered this way."

And the answer could be simple: we need more movies. As Rebecca Sun writes, "Stories about one historically excluded identity do not have to be about all of them." It's past time for more, different and diverse stories by and about multiple kinds of communities and underrepresented experiences.

The definite response? From the test creator herself, Alison Bechdel, who tweeted: "Okay, I just added a corollary to the Bechdel test: Two men talking to each other about the female protagonist of an Alice Munro story in a screenplay structured on a Jane Austen novel = pass." The movie's official Twitter feed expressed excitement in a reaction worthy of a "Fire Island" summer: