How "Fire Island" puts the Pride in "Pride & Prejudice"

From commentaries on class and wealth to a dastardly modern-day Wickham, the Hulu film does Jane Austen proud 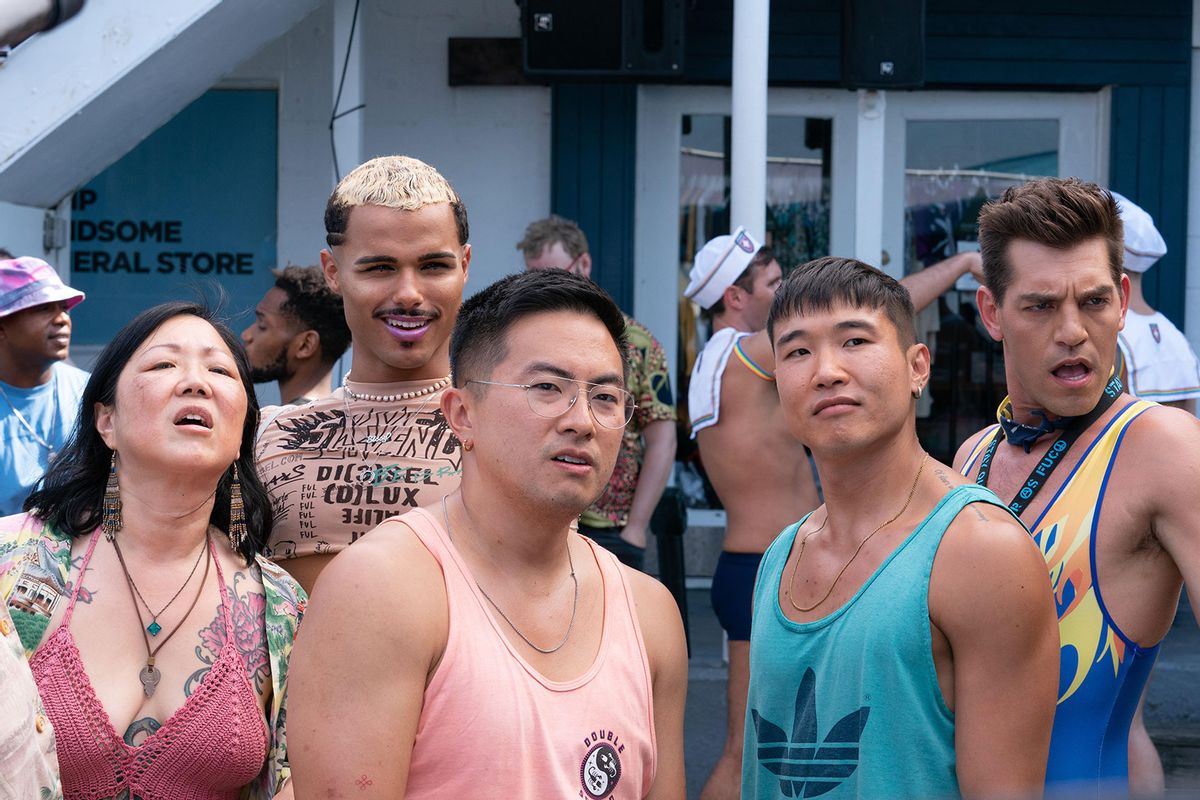 At the beginning of "Fire Island," Hulu's film about a group of queer friends determined to have the best summer week of their lives on New York's Fire Island Pines, Noah (Joel Kim Booster) quotes from Jane Austen, the writer he calls "the queen." Noah is a big reader, including reading Austen, Yann Martel and Alice Munro, among others. Booster wrote the film after doing just that: reading "Pride and Prejudice" and wanting to create an LGBTQI spin on the tale.

But "Fire Island," directed by "Spa Night" helmer Andrew Ahn, is more than a simple updating. Along with spotlighting queer, Asian American experiences, at a time of increasing anti-Asian discrimination and violence, specific elements of Austen's classic show up in the film in unexpected ways, including the best Mr. Darcy since Colin Firth.

RELATED: The best new movies to watch at home soon, from "Everything Everywhere All at Once" to "Fire Island"

In "Fire Island," Noah and a large group of friends, including "Saturday Night Live" cast member Bowen Yang, stay for the week at the Fire Island home of another friend, the film's only major female cast member: Erin (Margaret Cho). The friends met a decade ago when they worked at the same terrible, NYC brunch spot, shown in a cringing scene of racism by the café's awful patrons. The group lives separate lives now but they all come together for one week of sun, fun, drinking and hookups.

The family in "Fire Island" is found family, a bedrock of queer experiences as many youth may lose or be estranged from biological family.

This may not sound particularly Austen-y, but think of the balls of the classic novel, the preparations for the parties and the time spent in the country. Instead of balls, we have dances at clubs. Instead of Jane Bennet catching a bad cold, we have Howie (Yang) drinking too much. Instead of rain . . . well, we have rain here too and a romantic moment caught in the weather reminiscent of Elizabeth and Darcy in their own storm.

As Austen's novel centered around a family and their many sisters, we have a family here too. The family in "Fire Island" is a found family, a bedrock of queer experiences as many youth may lose or be estranged from biological family members due to lack of support or outright hostility, abuse or violence. Noah describes the island as "gay Disney World," and says it's "fun for the whole family." By family, he means his friends, whom he calls "sisters." 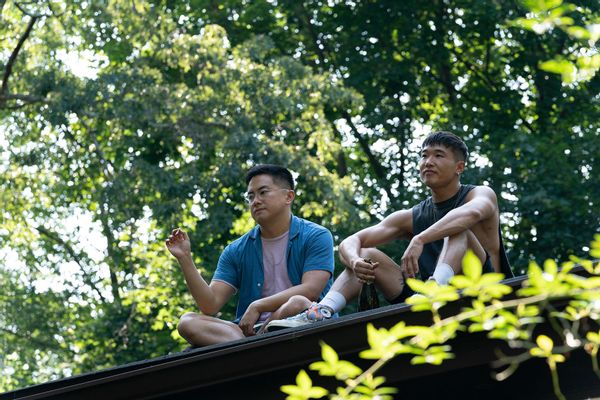 Fire Island (Jeong Park/Searchlight)The close friendship of Noah and Howie certainly mirrors that of Austen's Elizabeth and her sister Jane and the two fulfill similar roles. Noah is more confident, wry and guarded while Howie is a sweet-natured romantic and feels burdened by responsibility, while Noah looks out for him, to the point of neglecting himself.

In "Fire Island," Erin refers to herself as the mother of the group. Slightly older than the men, she cooks for them, worries over them and like Austen's Mrs. Bennet, stays back when they go onto some parties. In Erin's case, she's going to do a skincare mask at home. But she's also a bit of a matchmaker and can't help but exclaim with joy upon finding out that Howie's crush is a doctor, which is "almost like having health care."

The "Fire Island" crew is not wealthy by Austen standards, but remember the main family of "Pride and Prejudice," the Bennets, were struggling too, their patriarch resisting marrying off his daughters for money, to save the family home. The family home is threatened here too. Erin was able to buy her house after winning a law settlement, but she's having difficulty keeping it. It's older and shabbier, covered in pine needles, small compared to the beach-front mansions others on the island have. Multiple characters express disbelief it doesn't even have a hot tub. But the house is wooded, cozy and home. 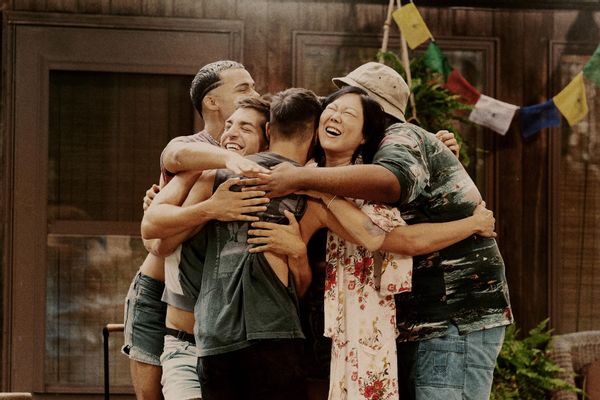 The impending end of tradition and their group house gives the film an urgency. Now, enter the love interests. Many characters in "Fire Island" have Austen counterparts. Some of the most striking include James Scully as Charlie, an updated version of Charles Bingley. Like Austen's Bingley, Charlie is friendly, kind and seemingly curious about the world and a little innocent about it (he's never seen "Gays in Space"). He's also not the sharpest shell on the beach. He's wealthy to Bingley standards and takes an immediate interest in Howie.

Like Wickham, we don't know for awhile why Dex is bad, we just know that he is. Also, his Instagram is terrible.

Another memorable Austen love interest is George Wickham. Presented initially as a foil to Darcy, the army officer is a gambler and went after Darcy's young sister. He's forced to elope with Elizabeth's young sister, Lydia, after running off with her.

The "Fire Island" counterpart is Dex (Zane Phillips). Like Wickham, we don't know for awhile why Dex is bad, we just know that he is. Also, his Instagram is terrible. Our Darcy stand-in here deplores him, as Darcys do. After earnest and somewhat naïve Luke ("I Love That for You's" Matt Rogers) hooks up with him, Dex's ickiness is revealed. He doesn't have Wickham's tendency to run off with teenagers, but he doesn't really care about getting consent.

Luke was too intoxicated to remember having sex with Dex, certainly too drunk to say yes to him. He's the representation here of Austen's Lydia: young, immature and flirty. Rogers is all of those things, plus he has a sad innocence about him; he wants things to work out. He's ashamed when they don't. Dex also filmed their sexual encounter and posted it on his website without permission.

Darcy helps save the day and punish the rogue, as Darcys also do.

We've saved the best for last. With so many characters, it takes a while to parse out who the Darcy character is, but once you see it, it's impossible to unsee it. In Austen, Mr. Fitzwilliam Darcy Esquire is an aloof dashing hero, the eventual (it takes some time) love interest of Elizabeth and the only one who can match wits with her. On "Fire Island," Conrad Ricamora is Will, a friend of Charlie's, a wealthy, stuffy lawyer: the Darcy of the island and the bane of Noah's existence. They keep running into each other. Then they run to each other. 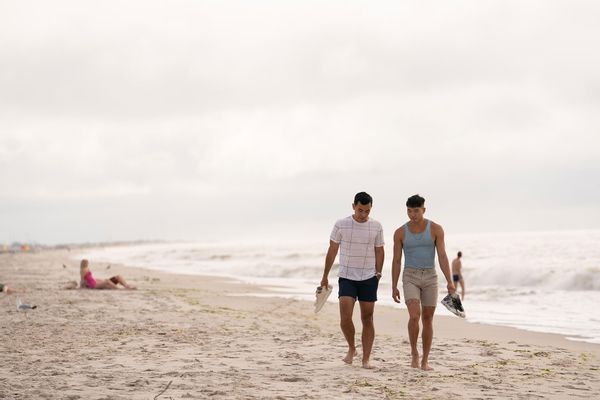 Though appearing prickly at first, Will is smart and he sees Noah — like Darcy sees Elizabeth — for who he is: also brilliant, beautiful and special. The slow build-up of the enemies to lovers storyline is as satisfying as a sunset. It might be a summer to remember, after all.