“The security issue is related to Supreme Court justices," McConnell argued, "not nameless staff that no one knows" 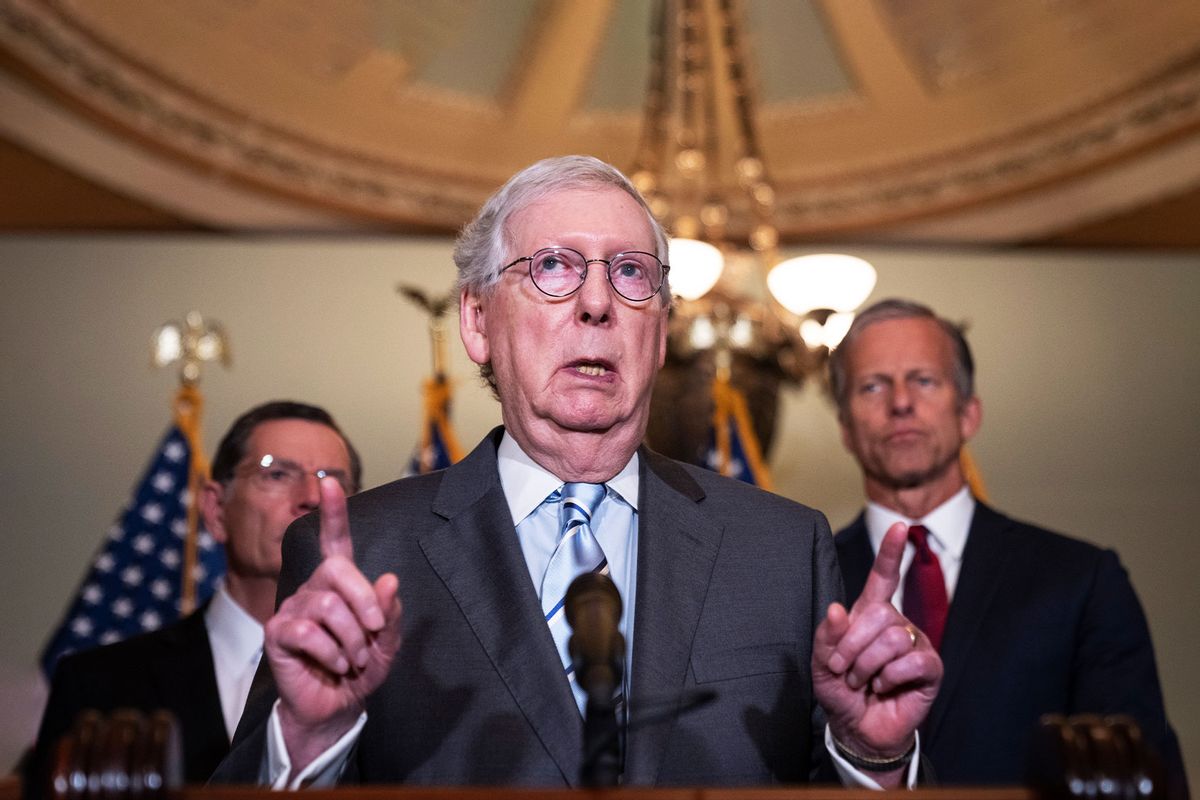 Senate Minority Leader Mitch McConnell, R-Ky., on Monday expressed outrage at the House's unwillingness to pass a Senate-approved bill designed to shore up security for the Supreme Court after a failed assassination attempt against conservative Justice Brett Kavanaugh.

"The version of the Supreme Court security bill that apparently [the Democrats are] going to try to pass on suspension tonight is not going to pass the Senate," McConnell told reporters this week. "The security issue is related to Supreme Court justices, not nameless staff that no one knows."

McConnell's comments come weeks after the Senate passed a bill in May to enhance the Supreme Court's security detail amid pro-choice protests in the wake of a report that the court would vote to overturn Roe v. Wade, the 1973 landmark law establishing America's constitutional right to abortion.

On Monday, the Senate-backed bill did not appear on the House's schedule, leaving Republicans frustrated by the delay.

"All we're trying to do is give the justices the very same protection that is available to members of Congress," said Sen. John Cornyn, R-Texas, who chairs the Senate Judiciary Committee. "Capitol police can provide protective details for people who are under imminent threat, but they don't have the authority in the Supreme Court to do the same thing, and I think this is playing with fire."

The holdup appears to stem from a Democratic effort to extend the bill's security provisions to Supreme Court staff as well.

"This issue is not about the justices; it's about staff and the rest," said House Speaker Nancy Pelosi, D-Calif. "The justices are protected; you saw the attorney general even double down on that."

McConnell, for his part, has threatened to block Pelosi's version of the bill, arguing that its scope is unnecessarily large.

House Minority Leader Kevin McCarthy, R-Calif., has likewise said that Pelosi's reasoning "makes no sense" because it was only Kavanaugh – and not his staff – who was unsuccessfully targeted by 26-year-old Nicholas John Roske last week. Roske, who turned himself into police outside of Kavanaugh's residence with a gun and a tactical knife, has been charged with the attempted murder of a federal judge.

On Tuesday, Pelosi indicated that the House would approve the Senate-backed bill, a move that would officially end the legislative standoff, according to CNN. At present, Supreme Court justices already have personal security details, but the bill would extend that protection to their immediate families. Supreme Court staffers, meanwhile, are currently under increasing scrutiny from right-wing media and internal investigation to find the source of the Alito leak.

"The place sounds like it's imploding": SCOTUS insiders spill more dirt as court hunts for leaker

Anti-abortion zealots target Sotomayor aide as source of leak: Their threats are no joke