Is it safe to use homemade tampons?

In light of the tampon shortage, doctors don't advise turning to this dangerous internet trend 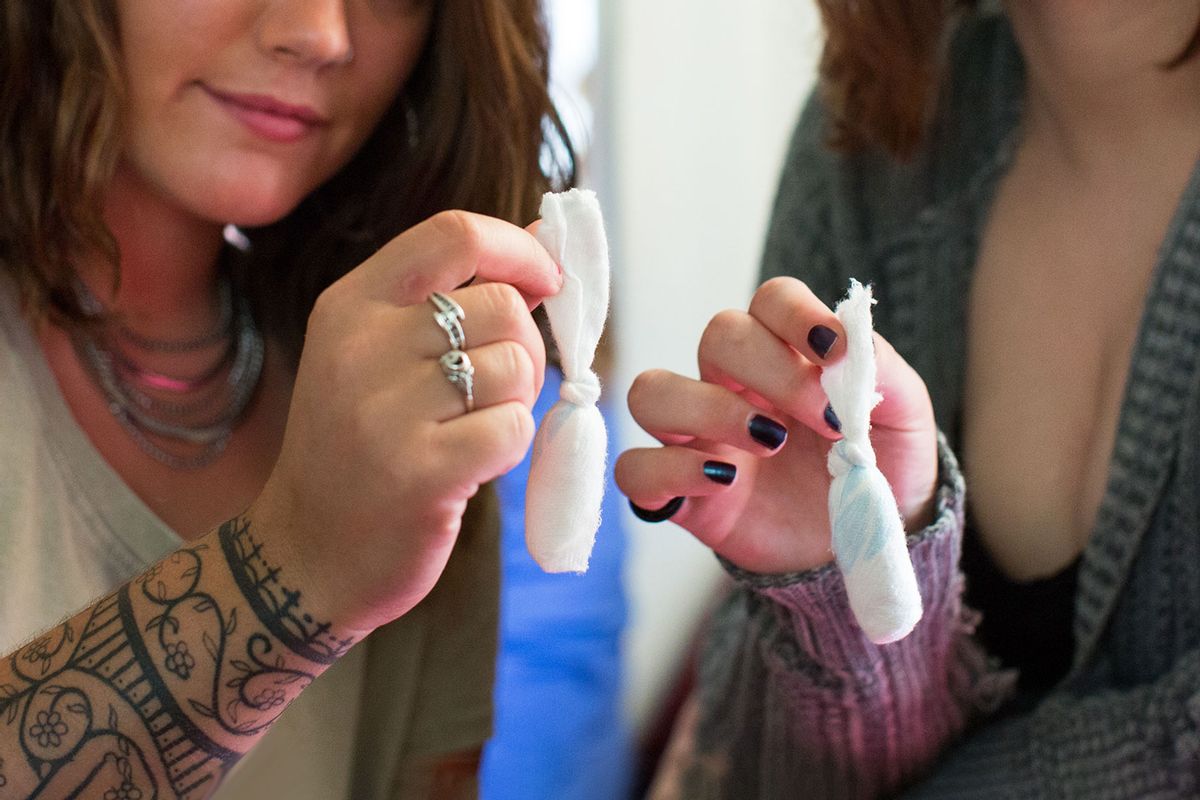 Two young women show tampons they made out of menstrual pads similar to those they would make while incarcerated at the Northwestern Regional Adult Detention Center in Winchester, VA, from their temporary home at Friends of Guest House, a residential re-entry program for female non-violent offenders, in Alexandria, VA, Tuesday, July 11, 2017. (Allison Shelley/For The Washington Post via Getty Images)
--

People who menstruate might not only be struggling to feed their infants due to a national baby formula shortage — but they also can't get proper period care because of a national tampon shortage.

Despite Marjorie Taylor Greene erroneously blaming the shortage on transgender people, or Tampax linking the shortage to an Amy Schumer commercial, supply chain breakdowns have come for tampons adding yet another challenge for essential female health care in 2022.

In April, Procter & Gamble, who owns Tampax and Always, revealed in an April earnings call that sourcing and transportation of the materials needed for tampons have been "costly and highly volatile," according to a Bloomberg report. Procter & Gamble recently told CNET the shortage is a "temporary situation" and that the Tampax team is producing tampons "24/7" to meet demand.

RELATED: Why it's not safe to make your own baby formula

"We are working with our retail partners to maximize availability, which has significantly increased over the last several months," P&G told CNET.

Russia's invasion of Ukraine is also partly to blame for the tampon shortage, as reported by CNN. Since both nations are major exporters of fertilizer, which is needed to grow cotton, the availability of absorbency materials for tampons has been in short supply. The shortage first came to light as people started posting photos on social media of bare shelves that used to house tampons and posting on internet forums wondering where all the tampons went.

As people who menstruate come to terms with this shortage and post about it on social media, they might be searching for alternatives online, too. Indeed, YouTube, TikTok and Instagram are rife with instructional videos on how to make homemade tampons. Some suggest any kind of fabric, even ripping up a t-shirt; while other instructional videos promote a method used by female inmates who have been forced to make their own tampons out of pads because of inaccessibility to proper menstrual care. Etsy made headlines in 2020 for retailers selling crocheted tampons. There are still some retailers on the marketplace who provide instructions on how to make DIY tampons.

Dr. Jen Villavicencio,  an obstetrician-gynecologist (OBGYN) and lead for equity transformation at The American College of Obstetricians and Gynecologists (ACOG), told Salon via email that the current tampon shortage is "a reminder that the internet can be a highly unreliable source of medical information."

"We do not recommend to anyone that they try to make their own tampons as the risk of infection would be grave compared with store-bought tampons," Dr. Jen Villavicencio,  an obstetrician-gynecologist (OBGYN) and lead for equity transformation at The American College of Obstetricians and Gynecologists (ACOG), told Salon via email

"The current tampon shortage is unsettling and places people at risk of discomfort and even harm," Villavicencio said. "We do not recommend to anyone that they try to make their own tampons as the risk of infection would be grave compared with store-bought tampons."

Dr. Melissa Simon, an obstetrician gynecologist at Northwestern Medicine, explained to Salon via email that making your own tampons isn't advised because the material used for these makeshift tampons is not tested for vaginas. The U.S. Food and Drug Administration (FDA) regulates tampons as medical devices. These tampons are made of cotton, rayon, or a blend of both ingredients. According to the FDA, "the absorbent fibers used in FDA-cleared tampons sold today are made with a bleaching process that is free from elemental chlorine, which also prevents products from having dangerous levels of dioxin (a type of pollutant found in the environment)."

In order to evaluate the safety of tampons, manufacturers submit data from testing the safety of the materials. As part of this process, the levels of growth of certain harmful bacteria in the vagina is measured. Without this process, people could be at a higher risk of developing an infection from an unregulated tampon.

"As the materials used to make these types of tampons may cause the production of more bacteria (specifically staphylococcus aureus) in the vagina that could lead to TSS," Simon said. "Also, homemade tampons may not be thoroughly cleaned, which could introduce more bacteria (staph a.) back into the vagina with re-use and thus create the perfect storm for toxic shock syndrome to develop."

Unfortunately, the tampon shortage is yet another reminder of period poverty in America.

One study published in Obstetrics & Gynecology found that one-third of low-income women who were interviewed for the study— more than half were unemployed — used strips of cloth, rags, tissues, or toilet paper during their periods. Some reported using children's diapers or paper towels taken from public bathrooms. Sixty-four percent of the women reported having trouble affording menstrual products in their lifetime. In the same study, 21 percent reported they were unable to afford menstrual products every month.

"It is also important to highlight that lack of access to affordable menstrual hygiene products is not a new issue and impacts marginalized populations such as those with housing instability, people who are incarcerated and those without access to clean, safe bathrooms," Villavicencio from ACOG said.

Jhumka Gupta, an associate professor in global and community health at George Mason University, published a study in 2021 that found that 14% of 471 college women surveyed in 2019 had experienced period poverty within the last year.

"We found that populations that were disproportionately impacted by period poverty were Black and LatinX students, students who were considered first gen, and students who were born outside of the U.S.," Gupta said. "On one hand, there's the products themselves, and on the second hand there's the stigma, and it's not just a matter of coincidence that the tampon shortage is not really talked about, or period of poverty in general."