Could ending period poverty be the secret to world peace? 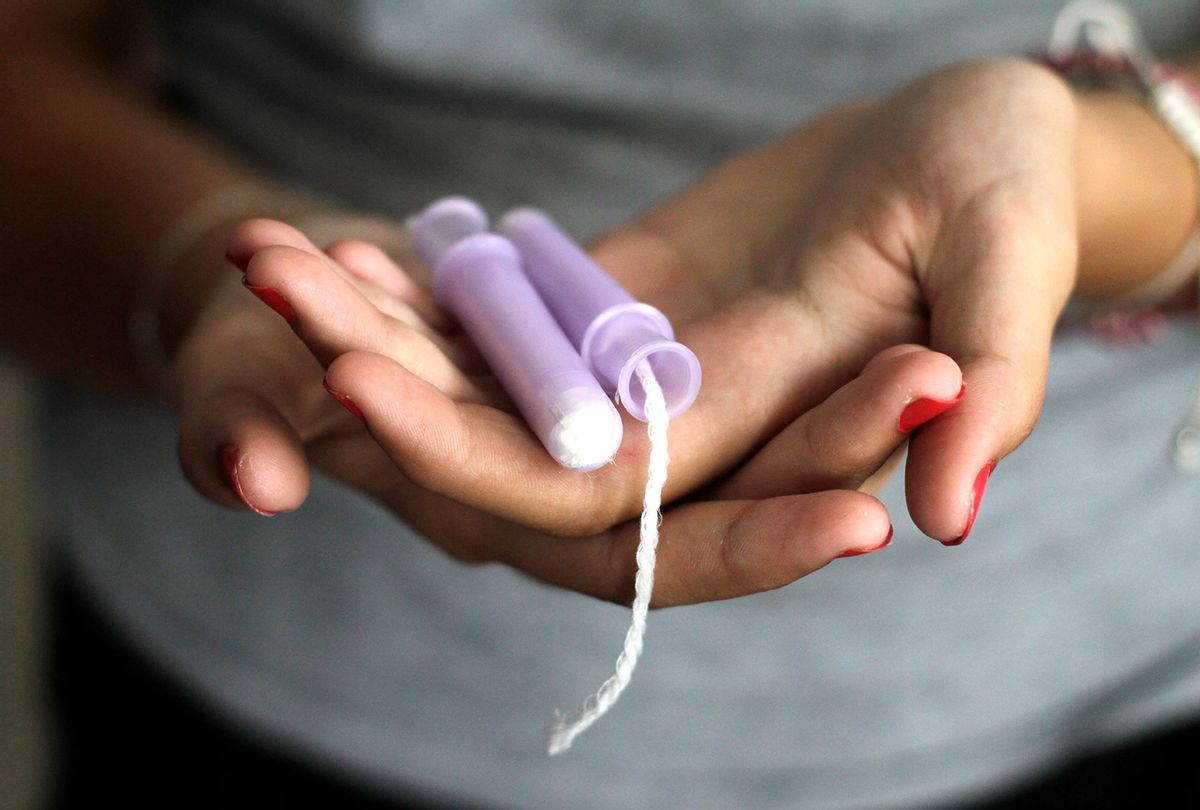 For a few days there this past fall, I thought maybe I had the secret to world peace all figured out. It has to do with tampons. It's a little more complicated, though.

Back in October, United Nations Secretary-General António Guterres was moved to speak after viewing a UN photography exhibition by female photographers showcasing the "diverse experiences, knowledge and expertise" of women in peacekeeping around the world. "Too often, women remain on the periphery of formal peace processes, and they're largely excluded from rooms where decisions are made," he told a group of ambassadors. "We can no longer exclude one half of humanity from international peace and security."

I was at the time taking a course in Peace and Conflict Studies, and Guterres's remarks set me thinking about all the reasons why women are excluded from those rooms where decisions are made — and about all those other rooms they're excluded from along the way. It's hard to make it to the corridors of power when you can't even go to school. It's hard to go to school when you can't even leave your home.

Lack of access to clean, safe period products is a staggering problem in every corner of the world. Advocacy group Global Citizen estimates that "500 million people live without adequate menstrual hygiene." The repercussions are immense. (Of course, not everyone who menstruates identifies is female and not every cis female menstruates, but the majority of those affected by period poverty are female-identifying.) In a 2018 survey of girls funded by Always maxi pads, one in five said they had at some point "either left school early or missed school entirely because they did not have access to period products."

A 2020 UNICEF and the World Health Organization study, meanwhile, found that "significant proportions of women in many developing countries are still struggling to safely manage their periods, lacking access to menstrual products, water and private places to wash and change." The report found, for example, that "One in five girls and women in Ethiopia, Samoa and Laos, and one in seven in Niger and Burkina Faso used no suitable menstrual products during their periods, putting them at risk of infection and other health problems. More than half of women in Bangladesh said they are not participating in everyday activities while menstruating. In Chad and the Central African Republic, one in three said they were missing out."

What's striking isn't just the difficulty so many women and girls face in managing their periods. It's that, as CNN noted back in July, this study was "one of the first to collect and analyze data on menstrual health across a number of countries." The very real and constant challenges of period management are often made all the more difficult because of silence, shame, ignorance and willful disinterest. As Amy Smith of Penn Nursing's Center for Global Women's Health observed about "The State of Period Poverty in the US" in 2019, "Without these items, women's movement and ambitions are tampered. During these times, they may not feel able to leave their homes, go to work, or participate in civic life." That's a terribly wasted opportunity.

RELATED: More women are giving birth after uterus transplants — and experts say they could even be put in men

In 2020, the World Economic Forum noted that while "Girls are more likely than boys to miss out on school…. Every $1 spent on girls' rights and education would generate a $2.80 return — equivalent to billions of dollars in extra GDP." And as the Institute for Economics & Peace reports in turn, "Economic performance and peace are often mutually reinforcing. Better economic performance assists in building peace and vice versa."

If you want further evidence of the potential here, just look at the significant overlap between the places where women are succeeding the most — like the global "Female Empowerment Hotspots" identified by UK company William Russell — and assessments like the Global Peace Index. It can't be a coincidence that nations like Iceland, Ireland, Denmark, Finland, Norway, and Sweden and Canada place highly in both.

In the past several years, there's been a stronger, more public push to fight period poverty. In India, "sanitary pad revolutionary" Arunachalam Muruganantham's pad-making machine has helped create jobs for rural women, as well as delivering clean supplies to them. Resources like Days for Girls send kits for making washable, reusable pads all around the world. It stands to reason then that anything that helps girls and women attend school and go to work, to do all the things they need to get done in their lives, makes a better world for everybody. Here's where it gets strange, though. When I started to look for evidence, I found almost zero hard data on the long term effects of these improvements.

I looked for reports from organizations that work on bringing menstrual supplies to communities in need, and their information about results was scant. Where was the proof that dropout rates were lowering, that grades were improving, that women's incomes were rising in places where menstrual health had become a priority? When NEA News reported in 2020 that "In New York City, a pilot project showed attendance increased by 2.4 percent at schools with free period products," that small uptick was viewed as evidence of success. Menstrual advocate Nancy Kramer, founder of Free The Tampons, told the publication at the time that "When they saw that, they voted to make it citywide, and then the state followed suit."

I reached out to public health experts. Plenty of them had powerful stories of the negative impacts of period poverty, but almost nobody could tell me what got better once those gaps began to close. I had a chief medical officer for one organization tell me, "If more places provided these items, we could lessen this health crisis and offset preventable health conditions caused by period poverty," but she couldn't get more specific than that.

Finally, a representative for one menstrual health organization explained why I couldn't find their data on metrics like school attendance or achievement. It's because the don't collect it.

They have good reasons not to. First of all, it's challenging, especially in places with strong taboos around menstruation, to get people to talk about their periods. Beyond that, "If you measure this and your data is positive, the criticism of it is, what about other factors that contributed?" the representative explained. "How do you know it was the intervention? If the data is not as positive, there are so many factors that would contribute to a girl not being able to attend school or how she performs academically that it can't solely be tied to an intervention." As she told me, "It's not just about menstrual health."

I also talked to Amaia Arranz, COO & Social Impact Director of Ruby Cup, a European menstrual cup brand that has a buy one, give one imperative that has helped distribute 100,000 cups around the world. She told me that "The reports we have say that girls say they feel more confident in class. They are less scared of getting up and say, 'I know the answer to this.'" But she acknowledged, "It seems to be very difficult to get any hard data on whether they stay in a school longer, if they married later in life, they avoid teenage pregnancy." She explained that there are often many other compelling, systemic issues like poverty at play. "There's so many obstacles stopping them from staying in a school and thriving that I think it would be too much of an ask to expect one thing to overcome all the other obstacles."

Then she said the one thing I needed most to hear. "I also think that being able to manage one's own period safely," she said, "is a good outcome in itself. Sometimes I think, why do we need to show that these girls are getting better results in a school or they're marry later? Isn't the fact that they don't have to be using socks from their sneakers every month a good results enough? Do they also have to do something else to get their dignity respected?"

I'd been looking at this all wrong, all along. I still believe firmly that helping girls and women exist in a safe and healthy way makes the world a better place for all humans. But I also have a new appreciation now for the simple idea that girls and women shouldn't have to plead their case so hard on this front either. What if every person who menstruates, regardless of their academic or vocational potential, could just bleed in peace?

Encouragingly, it's getting better. In 2020, Scotland became first nation in the world to make period products free to "anyone who needs them." Here in the US, in 2021, Ann Arbor became the first American city to "require by law the providing of menstrual products in public restrooms," while Oregon schools enacted the Menstrual Dignity Act, "requiring free menstrual products" in schools. Similar bills are cropping up all over the country. Also in 2021, for the first time, the Joint Monitoring Program for Water Supply and Sanitation presented "emerging national data on menstrual health," citing data collected from 42 countries as part of its goal of achieving "adequate and equitable sanitation and hygiene for all."

More of these initiatives are in the pipeline, though there is opposition in some quarters.

"I don't think the state of New Hampshire should be micromanaging schools regarding how and where to provide these products," Republican Representative Judy Aron, a sponsor of a bill to undo her state's requirement to provide free menstrual products in public schools, said in a House Education Committee hearing earlier this year. Voting against a bill to provide free menstrual products in her state's public schools, Connecticut Republican representative Nicole Klarides-Ditrea similarly said, "I spoke to my superintendents and they said students all have access in the nurse's office whenever they need to get them."

Regardless of setbacks and pushback, though, menstrual rights are finally becoming a signifiant priority in communities all across the globe. Because they're human rights. And as California Assemblymember Christina Garcia said after her state passed its own The Menstrual Equity for All Act in October, "Having convenient and free access to these products means our period won't prevent us from being productive members of society."