Parents are being exploited by unscrupulous individuals, often in online spaces 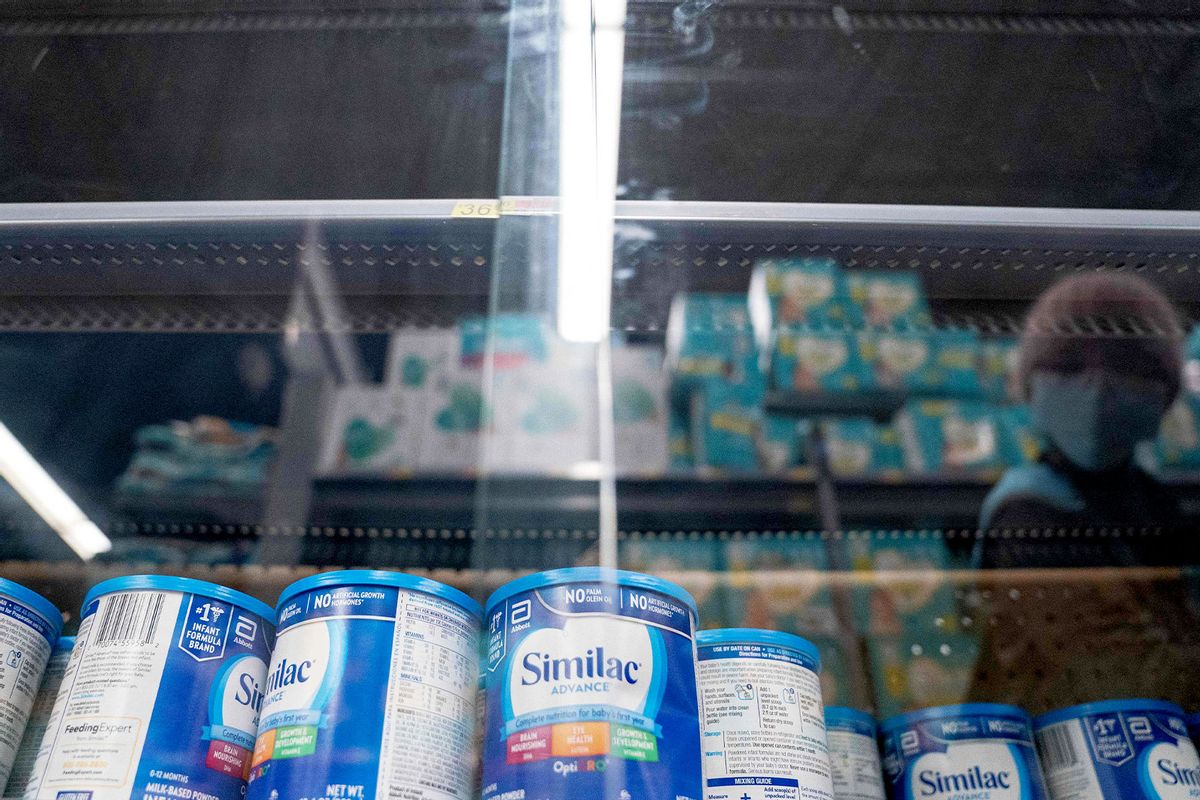 A shopper is reflected in a glass case while looking at baby formula at a grocery store in Washington, DC, on May 11, 2022. The United States is in the grip of a severe shortage of baby formula. (STEFANI REYNOLDS/AFP via Getty Images)
--

Just as Terri Bair's second son was born, baby formula maker Abbott Laboratories issued a huge recall of its baby formula products. The recall, which occurred in February of 2022, included several lots of Abbott's Similac, Alimentum and EleCare formulas, and occurred after two infants died and some reported bacterial infections.

When Bair heard about this, she was disappointed, but didn't fret too much: she preferred Similac, but didn't mind a more generic brand, which was in stock.

Until two weeks ago.

The supply shortage of baby formula has put many parents in similar positions as Bair: desperately scouring Facebook groups for formula-dealers, or in some cases, buying breast milk on online platforms.

"They didn't have any on the shelf," Bair said.

She returned next week; the shelves were still empty. The much-talked about baby formula shortage had finally reached her sleepy town of Narvon, Pennsylvania.

Bair turned to a Facebook group called Moms Helping Moms: Formula Shortage Donations, specifically designed to help parents find formula during this shortage, where she came across a post from a man selling extra formula cans he had in his possession. She paid him the shipping fee, and within an hour she had the tracking number. The transaction worked: a couple days later, she had the formula in her hands.

Then she saw another post  from a woman who claimed to lived in a small town whose stores were well-stocked with formula. Bair asked her if she'd seen any Enfamil Gentlease.

"I don't care if it's generic brand or name brand, I'll take one," Bair told the woman. "She writes back and says 'Oh girl, I'm at Walmart, they have all the sizes of the Enfamil.'"

Bair sent her money on PayPal for formula, and later another PayPal payment for shipping costs, which totaled $22.32. The woman sent Bair a tracking number. Later when Bair checked the status on her delivery, the update only said that a label had been created. The status didn't change the next day, nor the next, nor the next. Other members of the group connected with Bair, put the pieces together, and realized that they were being scammed. When Bair repeatedly asked for her money back, the seller blocked her on Facebook Messenger.

The supply shortage of baby formula has put many parents in similar positions as Bair: desperately scouring Facebook groups for formula-dealers, or in some cases, buying breast milk on online platforms. And Bair is not alone among parents who have encountered scammers preying on desperate parents.

Last week, the Better Business Bureau (BBB) issued a scam alert, warning parents that because of the shortage, online groups and marketplaces have become breeding grounds for unscrupulous formula dealers. According to the BBB, scammers typically post on social media and send a direct message to a parent saying they have baby formula. The scammer will oftentimes include photos of cans. Then, the parent will send money through Venmo or Paypal, but never end up getting the formula. The Federal Trade Commission has also issued a warning to consumers about scams.

"Scammers exploiting the high demand for baby formula have sunk to new lows," the FTC stated. "They're popping up online and tricking desperate parents and caregivers into paying steep prices for formula that never arrives."

Milk banks are typically used to serve NICU babies, but they've also seen an uptick in demand amid the shortage from people who are desperate to feed their babies.

And scams aren't the only issue stemming from the shortage: price gouging, too, is rampant. On OfferUp, an online marketplace app, one seller asked for $25 for a 12.5 ounce can of Enfamil — a 46% increase over Walmart's price, where a single can usually be purchased for $17.08.

"Although OfferUp does not generally control pricing on our marketplace, we did create price gouging protocols at the beginning of the pandemic for certain items," a spokesperson at OfferUp told Salon via email. "We recently engaged those protocols on baby formula."

The shortage is also leading many parents to search for breastmilk from donors, which is being sold or donated both on social media or via milk banks. Milk banks are typically used to serve NICU babies, but they've also seen an uptick in demand amid the shortage from people who are desperate to feed their babies.

"In light of this current crisis of infant formula shortage, we have seen approximately a 20% increase in demand in the United States — that's what our member milk banks are saying," Lindsay Groff, executive director of the Human Milk Banking Association of North America (HMBANA), which has a network of nonprofit member banks in the United States and Canada, told Salon. "And as the days go on, we are expecting that that demand could increase; now, we are seeing potentially light at the end of the tunnel here with some solutions that are being worked out, so hopefully things will level off soon because of course, we want babies to get what they need."

This week, ​​President Joe Biden invoked the Defense Production Act to increase baby formula manufacturing in an effort to address the shortage. He also directed the Health and Human Services Department and Department of Agriculture to pick up infant formula from overseas that meets U.S. health and safety standards. While the House tried to pass a bill for emergency funding to allow the FDA to properly inspect foreign manufacturers, GOP leaders voted against the bill.

Though Abbott Laboratories announced earlier this week that it could reopen its manufacturing plant in the next two weeks, it could take up to six to eight weeks to see the results on shelves. Indeed, the February recall led to Abbott halting production while Food and Drug Administration inspectors conducted a six-week investigation of the plant. A preliminary report released found traces of a bacteria called cronobacter on surfaces throughout the plant. Since then, the plant has been closed, which was a major cause of the aforementioned supply shortage.

Until then, many parents will have to worry about navigating scams and price gouging in addition to the stress of finding food for their babies.

For other Salon stories on the baby formula shortage and supply chain issues: