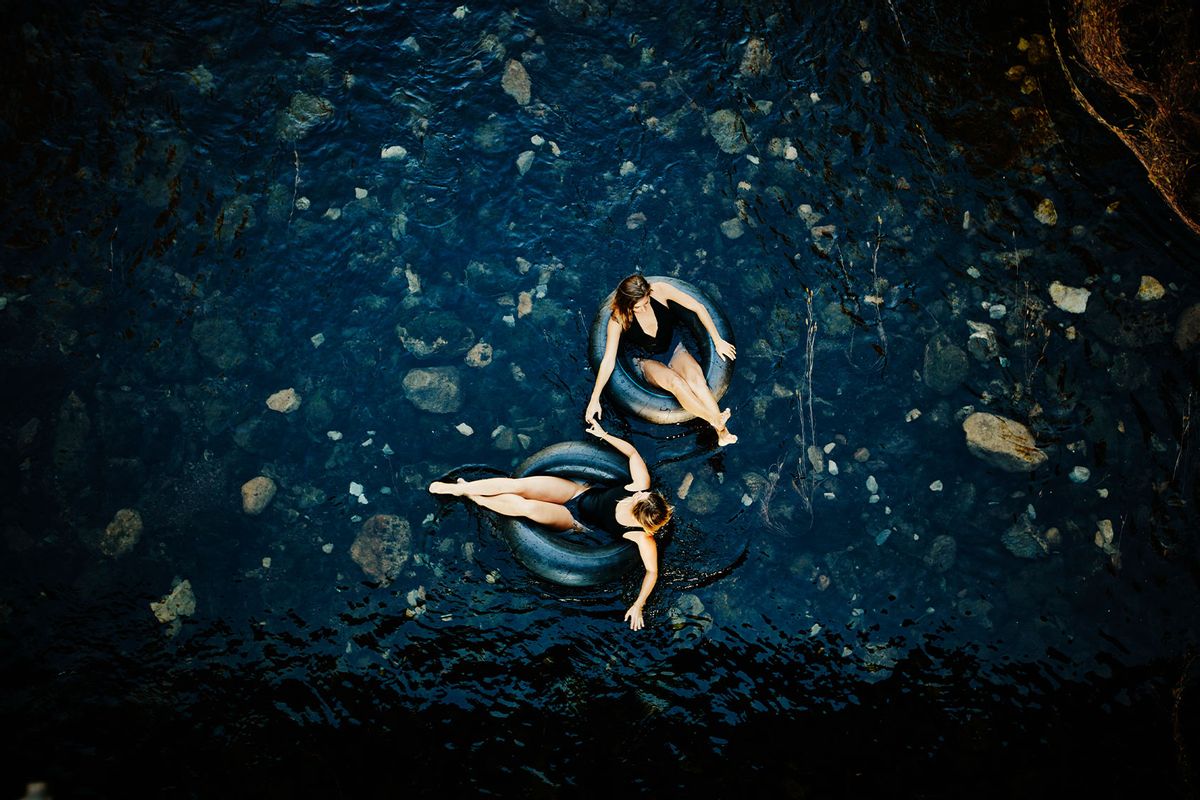 I don't have kids in Florida. Or any of the other states – the list seems to be growing by the day – that have passed or are considering versions of Florida's "Don't Say Gay" legislation, which is set to go into effect on July 1.

My three children go to public school on the westside of Los Angeles, which is basically the opposite of Florida.  Out here, kids say gay at school, on the playground, and – brace yourself – in church.  And lately, mine have been saying it at the dinner table, since their mom unexpectedly found herself inside the umbrella of LGBTQIA when she discovered at 40 that she's attracted to women. Because I've written a novel with a queer romance at the center of it, my midlife coming out has been more public than it otherwise would have been, and my desire to make sure my kids weren't the last to know about their mom's evolution meant that I shared with them early that I suspected my next partner would be a woman.  It went a little like this:

RELATED: What my gay childhood in a "Don't Say Gay" landscape was really like

It was hilarious, and tender, and wonderful, and I have California to thank for it. Not just the schools, but also our affirming Methodist church and our progressive neighborhood, where Pride flags are ubiquitous and family diversity is celebrated. How would my queerness have been metabolized by my children if we lived in Florida, or even in Georgia, where I grew up?

I'd like to understand how acknowledging what's true – that not everyone identifies with the biological sex they were assigned at birth and that some families have parents of the same gender – "sexualizes" young kids.

I have a guess. It's not a wild guess, either, because I've participated in countless discussions about gender expression and sexual orientation with friends and family in my home state, where Bible verses are slung around out of context to shame and repress. But don't get me wrong. I'm not asking how the raised-in-Georgia versions of my kids might have made me feel when I came out to them. I am a grown woman with a healthy self-concept, plenty of therapy under her belt, and strong faith in a God who delights in the diversity of the creatures they created (to those who object to my choice of pronouns for God, may I direct you to Genesis 1:1).

I'm asking about them. My children. The humans I care most about in this world, whose wellness is my responsibility. And I'm asking about other people's kids, the ones growing up in the dozen or so states seeking to prohibit the discussion of topics of gender identity and sexual orientation in elementary schools and to punish students and faculty who attempt to speak out anyway. Not the gay and non-binary and trans kids, though I worry about them all the time and feel sick to my stomach when I think about the lasting harm of LGBTQIA erasure in early education. I'm focused right now on the straight kids of queer parents, particularly queer parents like me, who discovered their queerness later in life and are attempting to live joyfully and authentically for their own well-being and the well-being of their children.  My hunch?  My kids would be much less OK right now if we lived somewhere else.

I can imagine what Ron DeSantis or Kay Ivey would say.  Something about woke ideology and the insidious harm it's doing to my kids. But please direct me to the pediatricians and child psychologists and social workers who would agree with them. I'd like to understand how acknowledging what's true – that not everyone identifies with the biological sex they were assigned at birth and that some families have parents of the same gender – "sexualizes" young kids. I'd like to see the evidence – any evidence! – that the "woke" kids in California are suffering as a result of LGBTQIA-inclusive curriculum. I can tell you mine aren't. On the contrary, they're navigating a tricky new normal – divorced parents, two households, a newly gay mom who isn't even sure yet if gay is the right adjective for her – with astounding, beautiful ease.

The opposite of ease?  Trauma.

What these (straight, cisgender) lawmakers are afraid of are stories like my family's story. Where queerness is just a piece of information.  Where exchanging pronouns is an act of deep compassion.

I try to avoid black and white thinking, but this one seems pretty black and white to me.  LGBTQIA erasure in schools lays the groundwork for deep and lasting trauma.  Despite all the clever wordplay, these "parental rights bills" don't "protect children." They hurt children, while at the same time advancing a political agenda that protects the power of straight, cisgender conservatives and reinforces patriarchal heteronormativity so that anyone outside that norm will continue to feel othered and shamed. The cynic in me wonders if maybe that's the point.  Because if queerness and gender nonconformity continue to be associated with lifelong psychological harm, then far right conservatives can make the case that it's the human conscience at work, because deep down LGBTQIA+ folks know that their lives are not in accordance with God's plan.

What these (straight, cisgender) lawmakers are afraid of are stories like my family's story. Where queerness is just a piece of information.  Where exchanging pronouns is an act of deep compassion. Where gender non-conformity is just another form of self-expression.  Where the foundation of our family identity isn't conformity but belonging, because we believe that belonging is the very best synonym for love.

This Sunday, my kids and I will stand in a church sanctuary where there is a rainbow flag on the wall and the female pastor affirmatively welcomes humans of all gender expressions and sexual orientations every single week. We will sing hymns that congregants in churches in the Bible belt will also be singing that day, and we will sing them without fear, or self-loathing, or shame. We will not spend one second of our day worried about what "woke" culture is doing to us, because we will be too busy celebrating the beautiful diversity of the world God created, the inherent pleasure of compassion, and the joy of being fully awake.