Our Fourth of July nightmare: A republic in the tightening grip of minority rule 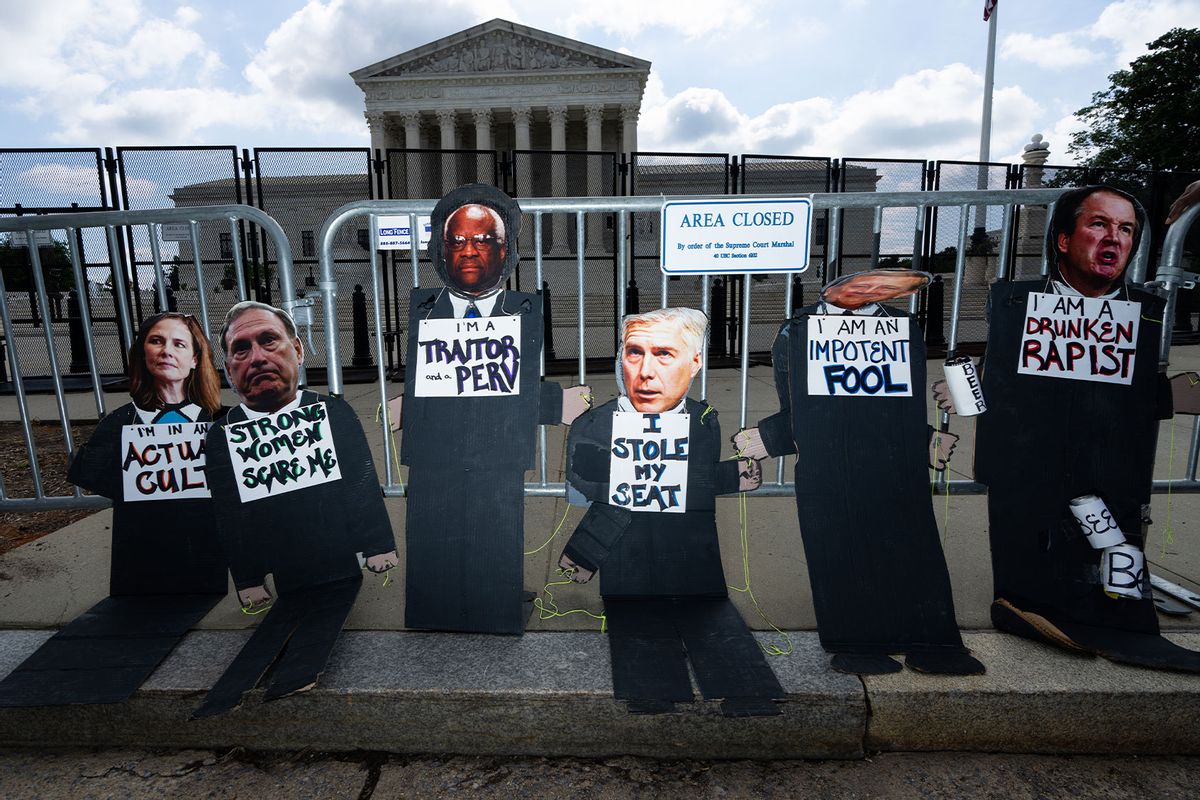 Cardboard cutouts of the conservative Supreme Court justices were propped up by pro-choice activists in front of the Supreme Court before the Dobbs v Jackson Womens Health Organization decision overturning Roe v Wade was handed down at the U.S. Supreme Court on Friday, June 24, 2022. (Bill Clark/CQ-Roll Call, Inc via Getty Images)
--

When the Supreme Court overturned Roe v. Wade last week, the court's conservative supermajority performed a nifty sleight-of-hand, as if dressed in magician's capes rather than judicial robes.

The six conservatives suggested that the court wasn't scrapping a half-century of settled law, but empowering the people to solve the contentious issue of abortion rights themselves, via the political process.

"It's time to heed the Constitution and return the issue of abortion to the people's elected representatives," wrote Justice Samuel Alito in the majority opinion. The ruling, Alito continued, "allows women on both sides of the abortion issue to seek to affect the legislative process by influencing public opinion, lobbying legislators, voting and running for office."

In a functioning democracy, in which majorities rule and the punishment for running afoul of the people's will is losing an election, reproductive rights would be safe nearly nationwide.

RELATED: How North Carolina became a laboratory for the GOP's subversion of democracy

We do not have a functioning democracy. The court isn't returning abortion rights to the political process to be determined by majority rule. It's sending the issue back to state legislatures so gerrymandered that they can scarcely claim to reflect the will of the people at all.  It's handing the issue to "elected representatives," yes, but elected from districts drawn by these very lawmakers so that they cannot lose.

It's a broken system and a rigged game, severed from electoral accountability and run by lawmakers increasingly insulated from the people. Alito and his colleagues fully understand this; their decisions to bless extreme partisan gerrymandering and bleed the Voting Rights Act have helped create this era of worsening minority rule.

This is democracy cosplay, performed by robed ideologues. After all, public opinion has remained remarkably consistent for the past 20 years: Before the Supreme Court's ruling in Dobbs, almost twice as many Americans wanted to see Roe upheld as wanted to see it overturned. And after the high court's decision, that number jumped even higher.

We have a broken system and a rigged game — democracy cosplay, severed from electoral accountability and run by lawmakers increasingly insulated from the public.

Yet even in states where majorities support abortion rights — including Iowa, Oklahoma, Ohio, Virginia and Arizona — lawmakers hurried to enact immediate, bold restrictions or enforce bans already on the books. This rushed activity followed additional abortion restrictions passed recently in Texas, Alabama and Georgia, despite opposition by majorities in those red states.

In Ohio, for example, a ban on abortions six weeks into pregnancy — a so-called heartbeat law — went into effect after the court overturned Roe. This law was passed by Ohio lawmakers in 2019 even though it was opposed by 52 percent of voters, and supported by just 39 percent.

Ohio enacted that ban just months after the 2018 elections, in which Democrats and Republicans equally divided the statewide vote for the state legislature. Nevertheless, Republicans had gerrymandered themselves such a massive advantage that they won nearly two-thirds of the seats. Gerrymandering built a firewall between runaway lawmakers and accountability at the ballot box. Only six of those 99 seats in the Ohio House could even be considered competitive, meaning there's effectively no way for a majority of voters to change their government.

Gerrymandering enables these laws — and then makes it all but impossible to vote the scoundrels out. So it should come as little surprise that GOP leaders have so little fear of the voters that they have already promised additional abortion restrictions this fall.

Even in closely divided states like Georgia and Florida, uncompetitive state legislative districts empower extreme lawmakers far out of the political mainstream. In Florida, those lawmakers passed a new package of abortion restrictions early this year, even though voters opposed them by a margin of nearly two-to-one. Gerrymandering helps Republicans hold 65 percent of seats in the state House, even though Gov. Ron DeSantis only won the state in 2018 by 33,000 votes. In 2020, when Donald Trump won 51 percent of the vote here, just six of 120 districts were competitive enough to be within 5 percentage points.

But that's also the case in officially red states like Texas and Oklahoma. The draconian Texas restrictions effectively turn citizens into bounty hunters, empowered to file lawsuits against anyone they think may have helped someone else obtain an abortion. A University of Texas/Texas Tribune poll showed that 57 percent of Texans opposed this legislation; lawmakers passed it anyway. Oklahoma — where a Pew Center poll found 51 percent of citizens believe that abortion should be legal in all or most cases — passed a similar bill, the public be damned.

Citizens can vote harder, lobby their elected representatives, run for office themselves, or do any of the other civic-minded activities Alito encouraged in his opinion. But none of that really matters when the outcomes are preordained.

Minority rule has a tight grip on American democracy, and it has only just begun to squeeze in earnest. The Supreme Court's conservative majority, of course, was itself appointed by two presidents who lost the national popular vote, and then confirmed by a U.S. Senate that does not reflect the public will and hands extra power to smaller, whiter and more conservative states.

Now, one by one, this court is handing down decisions most Americans revile, and suggesting that the answer lies in a political process that this conservative wrecking crew has been systematically kneecapping for the last decade.

It could get worse. On Friday, the court declared that it would hear arguments in a case from North Carolina that could hand gerrymandered state legislatures complete control over election law and procedures, from redistricting to the approval of presidential electors, without no veto by governors or review by state supreme courts. This terrifying notion is called the Independent State Legislature doctrine, and it seems likely that as many as four justices already support it. This is America as we head into so-called Independence Day: A nation where you can vote as hard as you want, but it might not make any difference.

Read more on the Supreme Court, gerrymandering and the end of democracy: